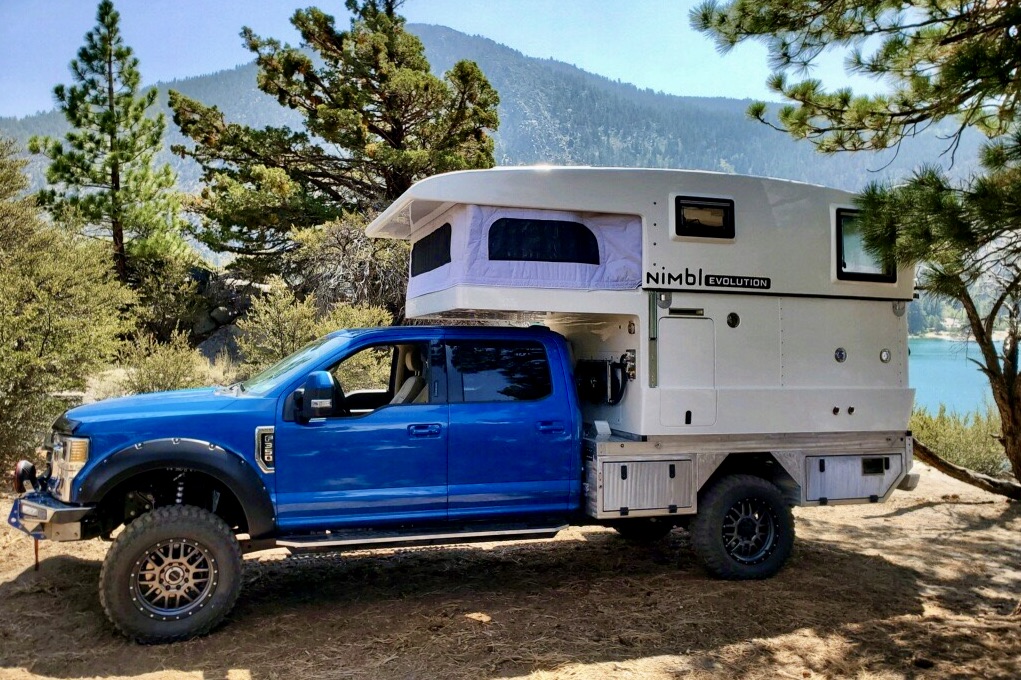 Be Change LLC has just relaunched XPCampers under the Nimbl Vehicles brand. According to the press release, the XPCamper V1 has been renamed the Evolution to reflect enhancements made to Steve Kozloff’s original 2007 design. These enhancements include not only the reduced weight and increased strength of the camper’s composite structure, but also a lithium battery system, all electric cooking, and an optional DC air conditioner. The company also announced that the Evolution will be sold with a gasoline-powered, Ford F-350 chassis.

“The Evolution is a great camper,” explained Jon Turner, Nimbl Vehicles founder and chief engineer. “If you look around, there’s nothing that really competes with it in terms of the price, the performance, the ability to do so much on a small platform. It’s such an agile, “nimble” camper that you can do a lot of things with it, especially when you compare it to an EarthRoamer or a Global Expedition Vehicle, which are glorious vehicles, but are too big.”

Building on the proven XPCamper V1 design, the Nimbl Vehicles Evolution features a reinforced monocoque composite structure outfitted with a latching, hydraulic roof lift with a manual override. The layout includes an east-west queen-size bed with underbed storage, a large kitchen, a wet-bath with a Thetford cassette toilet, a large dinette, and 6 feet 6 inches of headroom. The full-size, pop-up camper is perfect for overland expedition travel as evidenced by its massive 80-gallon fresh water tank, heated 24-gallon grey water tank, and spacious battery bay. The dry weight of the camper is only 2,500 pounds. 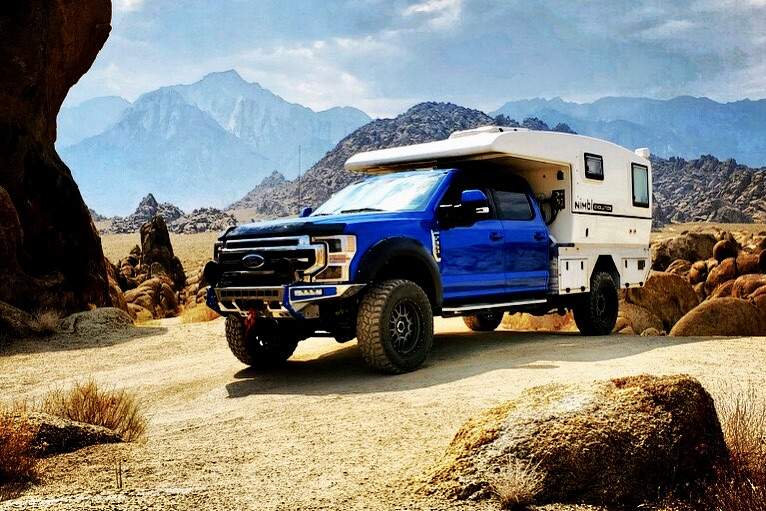 Like other high-end expedition vehicles, the Nimbl Vehicles Evolution is being sold as a complete setup built for overland expedition travel that includes the camper, a Ford F-350 chassis, and a custom, 8.5-foot aluminum service tray. The 4×4 chassis is equipped with the new 7.3L V8 “Godzilla” gasoline engine mated to Ford’s new TorqShift 10-speed automatic transmission. The truck’s configuration includes front and rear lockers, a 48-gallon fuel tank, 4.30 gearing, a custom forged rear leaf pack, a 2.5-inch lift, ICON Vehicle Dynamics coilover in front matched to ICON remote reservoir shocks at each corner, size-35 tires, and an optional Dissent Off-Road or Buckstop front bumper and winch. The payload rating of the Ford F-350 chassis is an impressive 4,340 pounds with a GVWR of 11,900 pounds.

While it’s believed that the vast majority of customers will choose to go with the gasoline-powered Ford F-350 chassis, Nimbl Vehicles recognizes that it’s a personal choice when it comes to the truck. Thus, the company will build a camper on virtually any old or new one-ton long-bed platform. This is good news for those who already own a Ram 3500, a Ford F-350, or a Chevy 3500 and want the features associated with the Evolution pop-up camper. 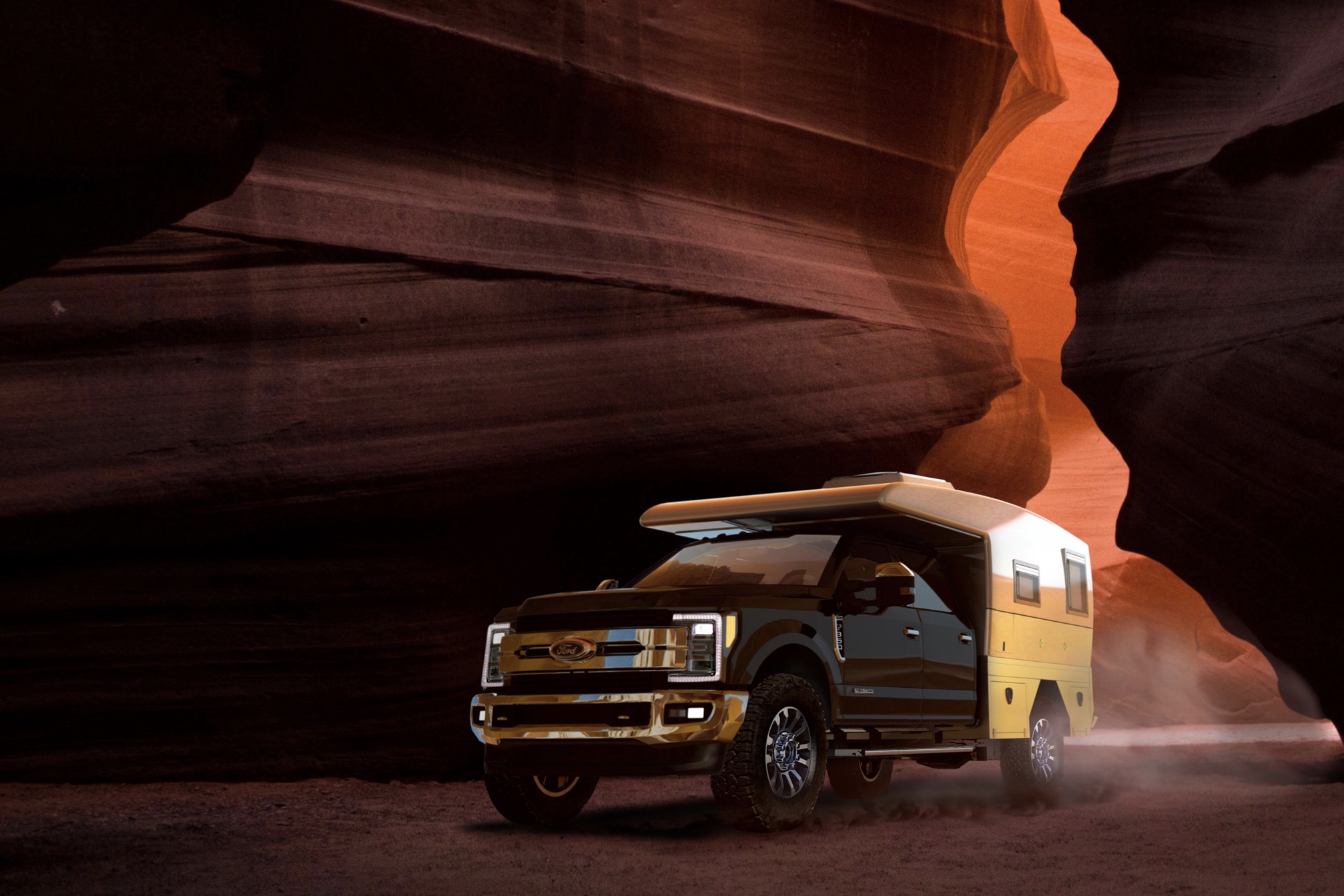 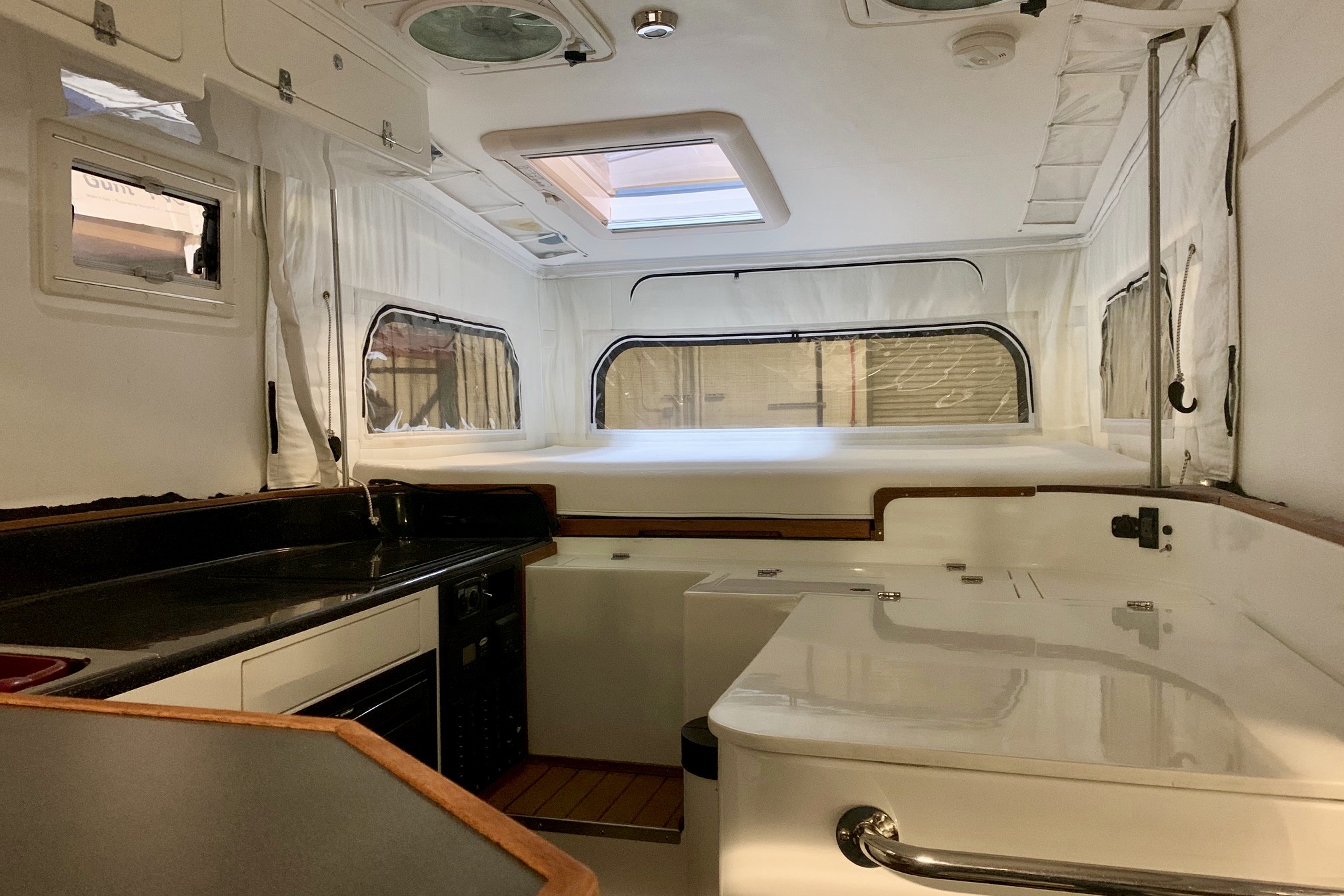 “The one-ton pickup truck chassis is ubiquitous in the United States. There’s a reason that they’re everywhere because they’re good vehicles, they’re comfortable vehicles, and you can drive down the highway at 80 miles per hour and then you can gear down and shift down into low-range, four wheel drive,” Turner said.

While Nimbl Vehicles will build on diesel platforms, the company recommends the new 7.3L V8 “Godzilla” gasoline engine. Why? Because modern diesels are plagued with emission issues (sensors, DPF, DEF system, etc.) that can lock the truck into “limp mode” without warning, requiring a trip to the dealer. Diesels also require ultra-low sulphur diesel (ULSD) and diesel exhaust fluid (DEF or urea)—neither of which are reliably available outside of Europe and North America.

The Nimbl Vehicles factory is located on a majestic 4.3 acres in Colfax, California. The 17,000-square-foot facility will have the ability to not only manufacture, service and provide customer training, but also provide overnight camping for guests. 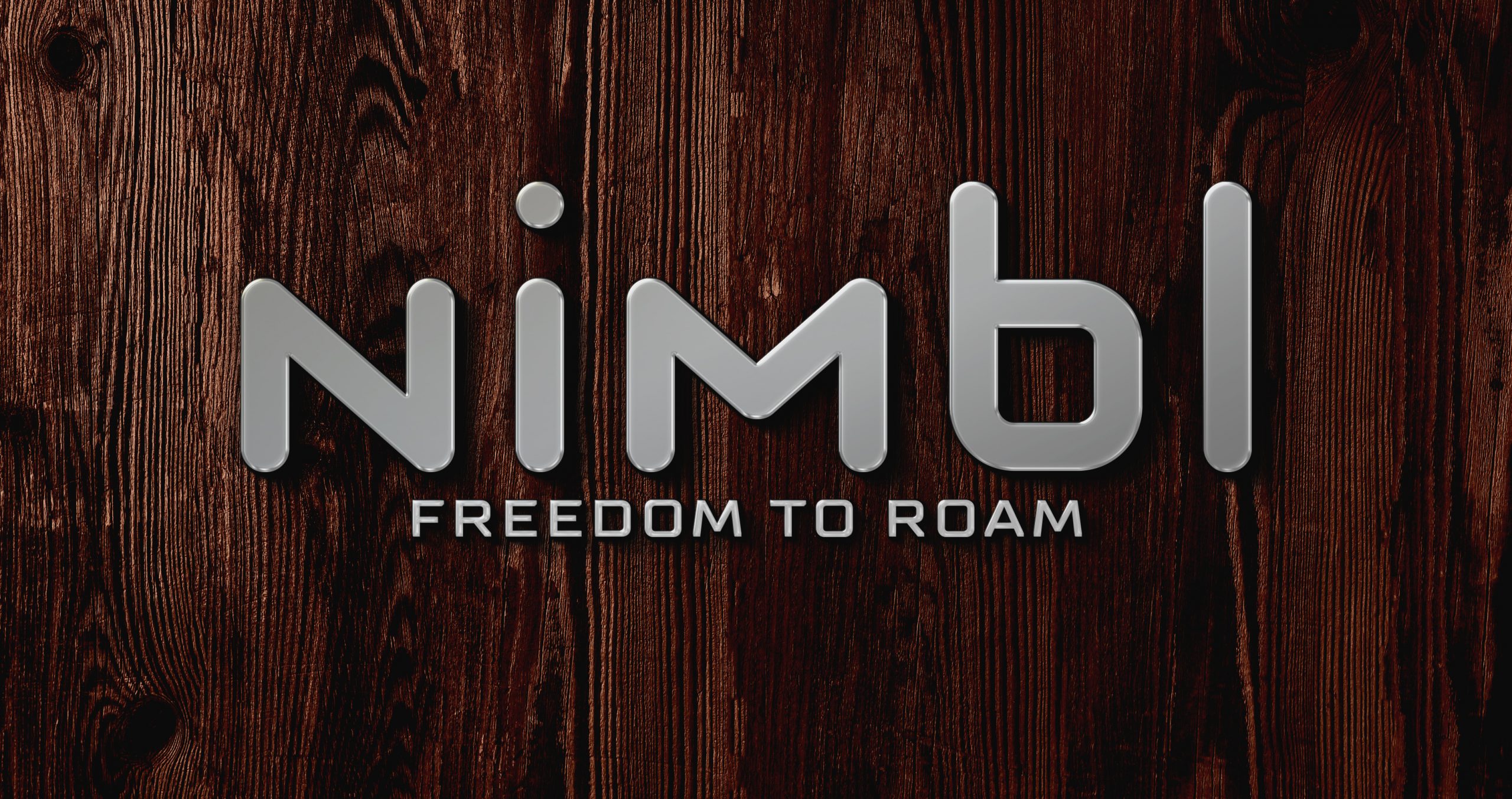 As announced in an earlier article, Nimbl Vehicle’s leadership consists of Judd Newman, president; Jon Turner, founder and chief engineer; and Steve Kozloff, designer of the original XPCamper V1. Steve is also an internationally renowned designer of arctic expedition yachts. Most of the craftsman and talent who worked with XPCampers are now working with Nimbl Vehicles as well.

Be Change LLC purchased the assets of XPCamper in a foreclosure auction in August of 2019.

“The important part of our message is that we’ve brought in not only former XPCamper employees, but also Steve Kozloff,” Turner said. “The V1 was his vision. He actually built the first camper. For whatever reason, after all the effort he put into it, he really never got a lot of credit for that, and that kind of bothers us. So we’re trying to make sure he gets the credit he is due for what is a really amazing design.”

Nimbl Vehicles is offering an introductory price for the Evolution at $249,000 for the base model. The price includes a $70,000 allowance for the chassis and upgrades, which puts the cost at $179,000 for a well optioned base model, including the standard 8.5-foot custom aluminum flatbed. The vehicle is sold factory direct only. Visit the new Nimbl Vehicle website at www.nimblvehicles.com to learn more. 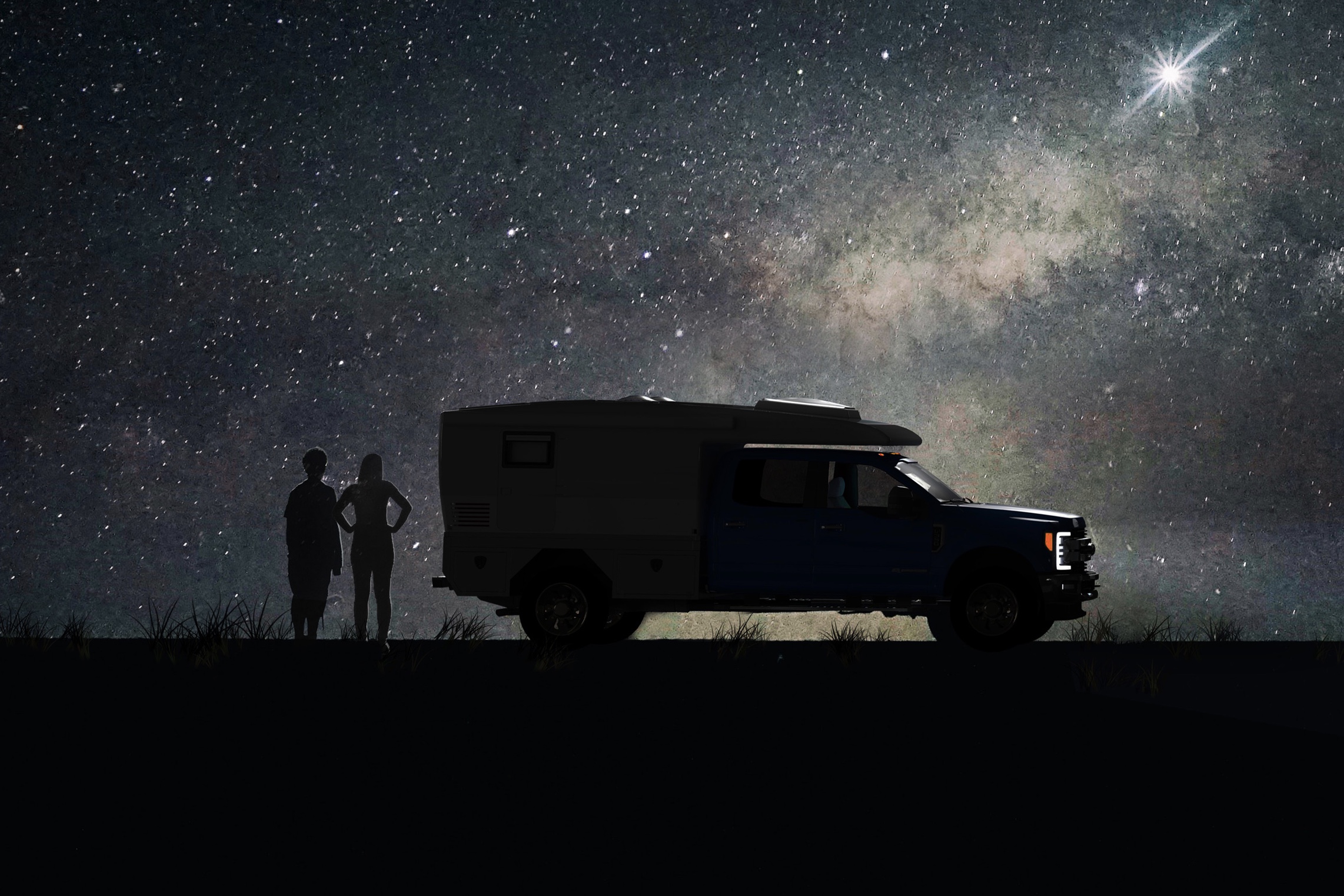 Financial Advisor Quits Job to Live on the Road

For some people, money is everything, but not for 30-year-old Phil Kockerbeck who worked as a financial advisor and made a fine living doing it. Phil enjoyed helping others achieve their retirement goals, but he [read more]

Life on the Road with a DC Compressor Refrigerator

Keeping Your Cool The Dometic CRX Series is a popular choice in truck camper refrigerator freezers. The 12 volt option and ability to adjust fan speeds according to ambient temperature make it ideal for applications [read more]

Looking for a custom, elite-quality truck camper that rivals the quality and appearance of an EarthRoamer? Then look no further than Bahn Camper Works. Founded in 2017, the Oregon-based manufacture builds one of the best [read more]