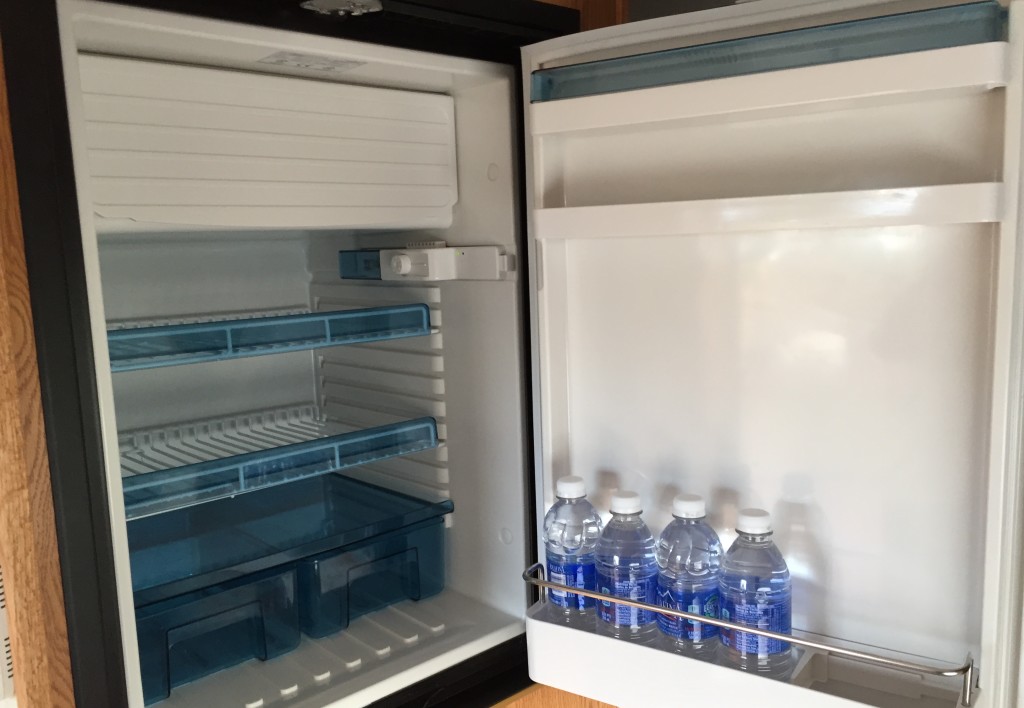 If you’re planning to buy a truck camper from the factory, one of the most important decisions you’ll have to make is which type of refrigerator to have installed in it. During the construction of our camper, we had the choice of installing either a Dometic CR-1110 Danfoss compressor refrigerator or the standard Dometic three-way absorption refrigerator. Living in the sun drenched southwest, this was a fairly easy decision for us—the Danfoss compressor fridge was the only way to go. For you, however, the choice might not be so easy. The purpose of this article is to provide a little history about the Danfoss DC compressor refrigerator, how it works, and the pros and cons of owning one.

At this point, you may be wondering what this compressor does. What’s its purpose? The refrigerator compressor basically does two things: it raises the pressure of the refrigerant vapor used in the refrigerator and helps to maintain the vapor’s flow rate. Unfortunately, the process of compressing gas and raising pressure requires a lot of energy. This is why refrigerators that employ vapor compression refrigeration technology typically use a lot of electricity. All that changed with the arrival of the Danfoss BD35F compressor. This compressor is able to accomplish both of these tasks and use far less power than its predecessors, which is why it’s so special.

So what are the operating numbers? How much amperage does the DC compressor refrigerator typically consume? According to the Secop website, the maximum current draw of the Danfoss BD35F compressor is 4 amps. The literature that came with our Dometic CR-1110 lists a maximum current draw of 5.9 amps DC. According to a Dometic representative, the disparity between the two figures is due to the other components in the refrigerator that require power to operate like the condenser fan and light. Typically, we’ve found that the Dometic CR-1110 doesn’t require that much current to operate. With ambient temperatures in the upper 70s and at a temperature setting of 4.5 (1 lowest 7 highest), the refrigerator typically consumes about 30 watts or 2.5 amp hours DC. As you can see, these numbers are far less than what you would see with a standard, three-way ammonia absorption refrigerator operating on 12 volts DC.

Those are the pros, now lets look at the cons. There’s really only one. Although the Danfoss DC compressor is much more efficient running on 12 volt power than the ammonia absorption type, it still consumes a considerable amount of amperage during a 24 hour day. The consumption rate is typically 60 amp hours a day, which breaks down to 2.5 amp hours or 30 watts per hour. What this means is that your RV will require a minimum of two 12 volt batteries (about 200 amp hours) and a effective way to keep them charged, either a 200 watt solar power system or a generator. Personally, we’ve found that having a 340 watt solar power system and a 220 amp hour battery bank is more than large enough to run our compressor refrigerator and meet all of our other electrical needs. However, if you boondock for extended periods of time in cold, predominantly overcast areas like the Pacific Northwest then having a generator as a backup to a solar power system or as the primary means of keeping your batteries topped off will probably be needed.

After reading all of the positives of the Danfoss DC compressor refrigerator, you may be wondering which company makes the best one? That’s hard to say. Top manufacturers include Dometic, Norcold, Vitrifrigo, IsoTherm, and Nova Kool. They all use the Danfoss DC compressor, so generally speaking, they all offer the same performance and reliability. The quality of construction and the amount of insulation, or lack of it, is where the good units separate themselves from the mediocre ones. Again, it pays to do some research ahead of time. All manufacturers have detailed spec sheets of their refrigerators online. Take note of amp hour consumption rates and other ratings. Read the product reviews and Internet forums to get a feel for user satisfaction. Whatever your choice, and as long as you have a capable battery charging system, you’ll be sure to enjoy the benefits that the Danfoss DC compressor refrigerator offers.

Ah, the good ‘ole days. It wasn’t that long ago when having a 240 watt solar power system in our truck camper was the bees knees. The occasional use of a light, the water pump, [read more]

An alarming trend has recently taken place in the truck camper industry. Many manufacturers are now building multiple slide-out campers–one model has as many as four–weighing in excess of 6,000 pounds. In the mind of [read more]