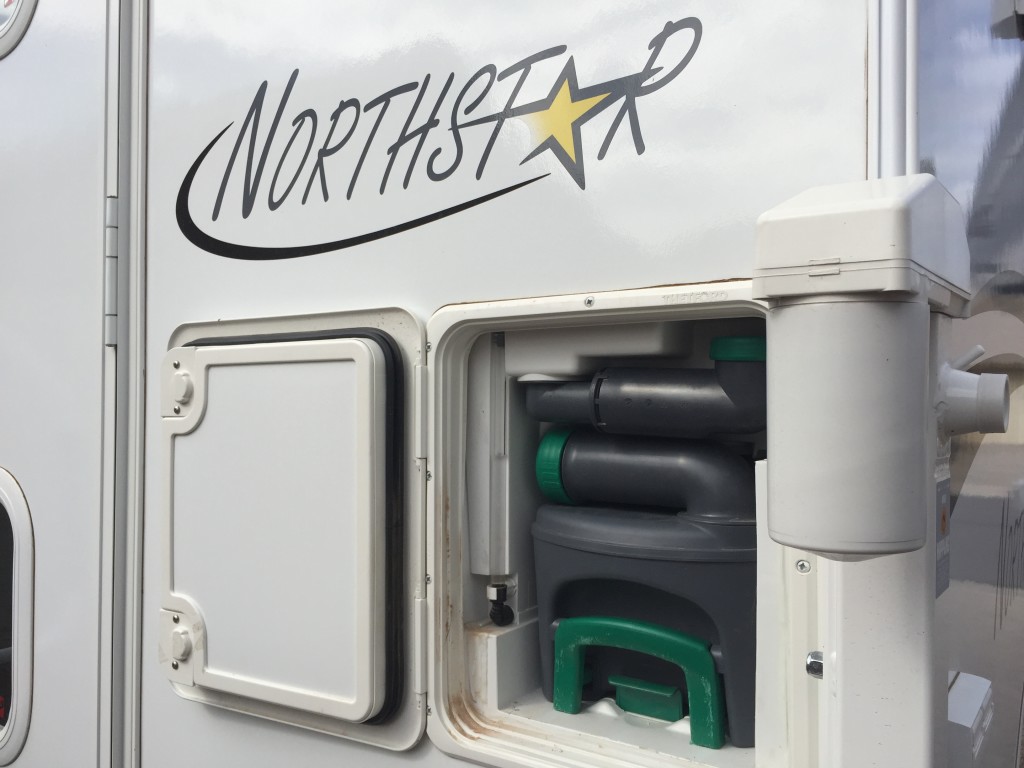 There’s no doubt about it, there isn’t a truck camper feature more polarizing than the Thetford cassette toilet. You either love it or you hate it. We’ve owned seven RV’s over the years and our new camper is the first with a cassette toilet. I’d be lying if I said I didn’t have some apprehension about buying a truck camper with this feature. Fortunately, it’s been a non-issue for us. In fact, we really enjoy the freedom that the cassette toilet offers. The purpose of this Review of the Thetford RV Cassette Toilet is to discuss the pros and cons of the cassette toilet and to share a few tips on how to use and properly care for it.

Before delving into the pros and cons of the cassette toilet, it will be helpful to learn more about its capabilities and features. Inside the camper, the cassette toilet looks and works like any other RV toilet, the only difference being that the cassette toilet is mounted atop a bench seat. It features its own, fixed four gallon fresh water holding tank which is used for flushing. This tank has a retractable fill spout, which is accessed outside through a small hatch, that allows you to fill it with any kind of “clean” water including lake water, regular fresh water, or even the gray water from your camper. The removable cassette, which is also accessed outside through the aforementioned hatch, is basically a 5-gallon black water holding tank with wheels. The cassette has a pull handle on one end and two wheels on the other that allows you to pull the cassette behind you like a rolling suitcase. It also has a convenient pressure release button to facilitate faster dumping.

So what are the pros of owning a cassette toilet? First and foremost, the cassette toilet gives you much more freedom on where you can dump. Rather than limiting you to just RV dump stations, which are sometimes difficult to find, the cassette can be dumped practically anywhere, like at a campground pit toilet, city park, or interstate rest area bathroom. This freedom on where you can dump also means that you no longer have to deal with the excessive cost, the waiting lines, and the mess associated with using an RV dump (obviously, you can still use an RV dump to dump your cassette, but it’s no longer mandatory). Moreover, the cassette dumps quickly, is easy to clean, and doesn’t leave a nasty stench in your camper like the traditional black tank is prone to do.

Having a cassette toilet offers still more benefits. Since trips to dump stations are no longer needed, you can ditch the annoying “stinky slinky” sewer hose and use that valuable storage space for something else like a fishing pole or other gear. Having an easily transportable cassette also means that you no longer have to break camp with your camper to dump like you would with a conventional RV. Additionally, for those who live in winter climates, having a cassette toilet also means that you can still use the toilet after winterizing your rig—simply fill the four gallon reservoir with RV anti-freeze or windshield wiper fluid and use that for flushing water instead. Finally, having a cassette toilet means that you no longer have to deal with inaccurate black holding tank sensors that always get caked with “stuff,” the cassette has its own, very accurate sensor and red light indicator that illuminates when the tank is almost full. If there’s still any doubt about how full the cassette tank is, simply open the flush lever and take a peek inside. You’ll know when you do that.

The list of cassette toilet cons is short, but for some they’re fairly significant. Obviously, the big negative is the small size of the cassette’s holding tank. Five gallons isn’t very large and is only one-third to one-fifth the size of the standard truck camper black water holding tank. This means you’ll need to be judicious on how often you use the toilet or else you’ll be dumping every four or five days. Cutting usage means using public facilities more, and for guys, going more outside in the woods. Another negative is that removing the cassette from the holding bay requires a small amount of lifting. This isn’t an issue for most, but for some who have back and shoulder issues, lifting a full, 47-pound-cassette could be a problem. Finally, the toilet inside does sit a bit too high, meaning some may be unable to touch the bathroom floor with their toes. Again, not an issue for most, but this could be a major turnoff for some.

Now that we’ve taken a look at the pros and cons of the cassette toilet, here are a few tips on using it. First and foremost, make sure the cassette is empty when the camper is not in use. This means dumping the cassette as soon as you return home from your trips. Never leave the cassette full inside your camper for any length of time because it can dry out, making cleaning difficult and unpleasant. And speaking of cleaning, keep the cassette holding bay clean. We’ve found through regular use, especially on rough roads, that it’s normal to have some minor spillage. It’s best to keep on top of these spills and any dirt that may accumulate inside. I like to use Lysol disinfecting wipes

to clean not only the holding bay, but also the cassette itself. They’re bleach free, cheap, and work great.

Should you use a cassette tank additive? Some do and some don’t. Some facilities prohibit the dumping of waste fluids laced with additives in their toilets, so many cassette toilet owners choose not to use them and deal with the unpleasant odors when they dump. We haven’t come across that situation, yet, so we still use an additive in our cassette. What do we use? We prefer Thetford Aqua Kem

. We like the small, 32 ounce size bottle because it’s easy to store, and frankly, you don’t need much additive for a 5-gallon cassette. And while we’re on the subject, don’t waste your money on the small black water holding tank packets. They’re overkill for the small 5 gallon cassette tank and are made for much larger black water holding tanks. A liquid, like the aforementioned Aqua Kem, is much more economical.

Here’s another tip. If you find through regular use that you fill your cassette too often, you may want to invest in another cassette. I have a few friends who did this and having another cassette on trips works well for them. At $200 a pop, it’s an expensive option, but a great one for those who like to boondock a lot. Since Thetford doesn’t deal directly with consumers, you’ll need to contact your truck camper manufacturer to purchase another one.

Before closing, I thought I’d address a question that you may have thought of while reading this review. You may be wondering what we do with our gray water now that we no longer visit RV dump stations. We do one of two things. If we’re boondocking where dumping gray water is permitted, which for us is most of the time, we simply dump our tank at the base of a thirsty bush or tree. But if we’re camped at a location where dumping gray water isn’t allowed, then we drive the camper to a local toilet, and use the cassette as an auxiliary gray tank. We remove the cassette from the cassette holding bay, place it on the ground, then we run a short hose from the gray water drain cap to the cassette and empty out the gray water holding tank. Our gray tank is only 13 gallons, so we’ll never need to make more than three trips to the toilet to empty the gray tank. Doing this not only empties out the gray tank, but also helps keep the cassette tank relatively clean.

As you can see, the pros and cons of the cassette toilet are equally compelling and significant. Like all options it comes down to personal preference and what’s important to you. Fortunately, if you’re interested in getting an RV with a cassette toilet then you’re in luck. The cassette toilet is the industry standard in nearly all caravans and motorhomes in Europe, Australia and New Zealand. Here in the U.S., however, it’s a mixed bag. Cassette toilet availability is pretty much limited to truck campers though a few high-end expedition vehicle manufacturers, like EarthRoamer, offer it as an option as well. Truck camper manufacturers that either offer the cassette toilet as standard equipment or as an option include BundutecUSA, Northstar, Phoenix Pop-Up Campers, Alaskan Campers, Hallmark, Four Wheel Campers, Palomino, and Scout. What would we rate the Thetford Cassette Toilet? On a scale of 1 to 5 with 1 being the lowest and 5 being the highest, we give the Thetford Cassette Toilet a rating of 5 stars. It’s a great product.

It’s the end of an era at Truck Camper Adventure. After four years, it’s time to sell our Northstar Laredo SC truck camper. We’ve enjoyed the camper and have taken it to a lot of [read more]

After months of development, Ohio-based NuCamp RV unveiled the final prototype of the Cirrus 670 short-bed truck camper at the Florida RV Supershow and reported that the camper is now in production. Touted as NuCamp’s [read more]