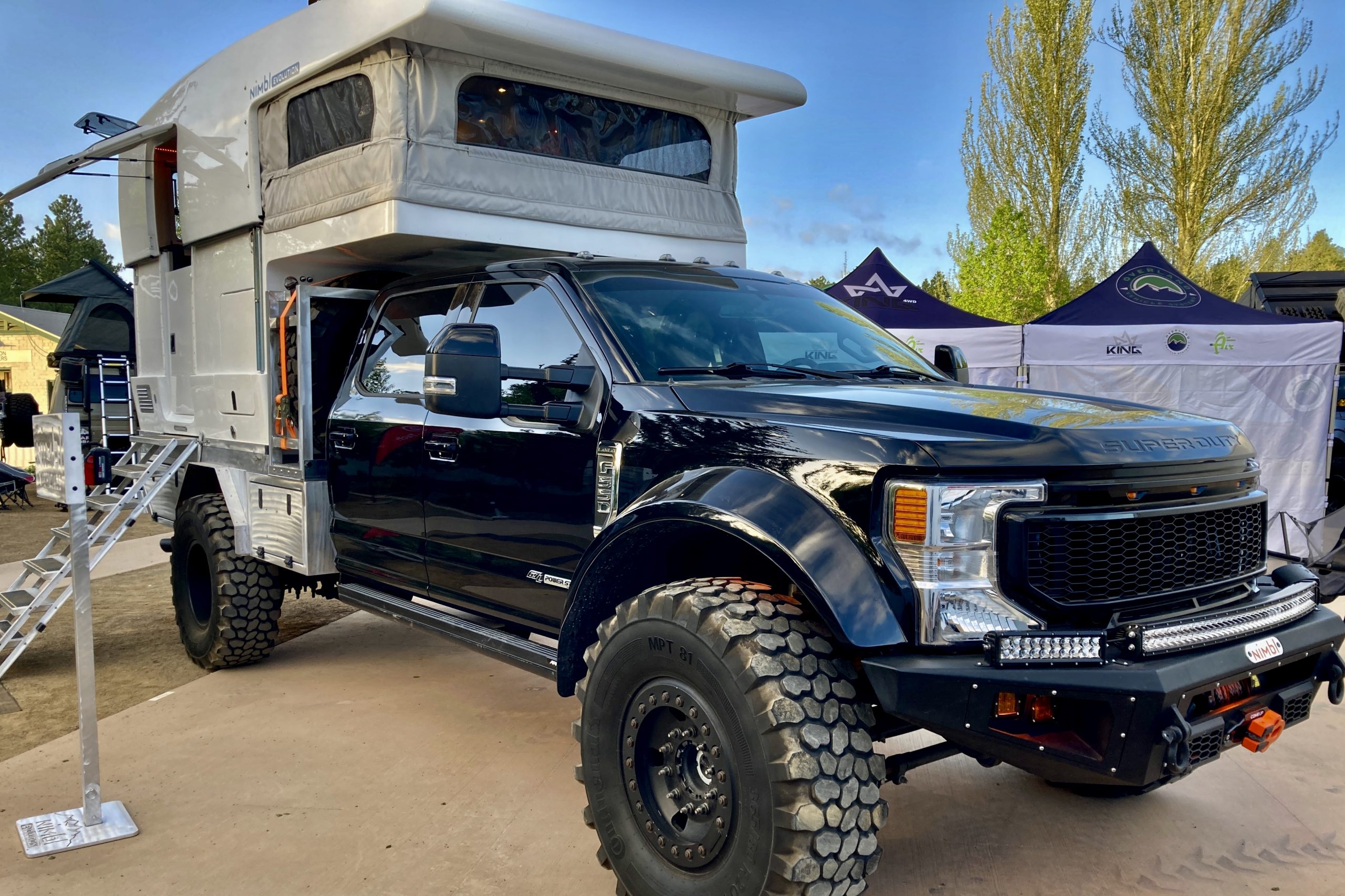 Nimbl Vehicles will reveal its new carbon fiber Evolution camper at the 2022 Overland Expo West, 20-22 May. To celebrate the big change, the company will be displaying the updated camper on a new platform, a Ford F550 sporting a custom service tray and size-41 super-single tires.

“We previously had kind of dipped our toes into it in that we started doing carbon fiber for our storage compartment doors, explained Jon Turner, Founder and Chief Engineer of the California-based company located near Lake Tahoe. “We were really happy with the way that turned out. So we’ve continued to propagate that by offering a full carbon fiber camper. The way we do carbon fiber is not really done in terms of obtaining a weight savings, we’re pretty good on weight, and most of the weight comes not from the matting, but the density of the foam and thickness of the foam, which we use for our insulation. So it’s a little bit lighter, but we’re not really going to market with that, but it’s definitely stronger and more rigid.”

Aside from the big carbon fiber upgrade, a number of improvements were made to the Nimbl Evolution. While these changes improve the Nimbl Evolution in significant ways, the 2,500-pound flatbed camper still features the distinctive, clam-shell shape and interior layout that makes it standout from other pop-up campers. One look and you’ll have to agree, the Nimbl Evolution is nothing like your grandpa’s truck camper. It’s not even close, especially when you factor in the custom-tuned 4WD Ford and proprietary aluminum tray.

“Yeah, we’ve made a lot of updates to the camper,” Turner said. “Like everybody else, we’ve moved away from Dometic windows. We’re now using Tern Overland windows. We really like them. We like that they’re a US company and are focused on our market. We needed to make molding changes because the new windows were different, and so we decided that if we’re going to make some changes, and it’s like $200,000 to make tooling changes, so we decided let’s do not just that, but let’s do these other things that we were looking for. And so that led us to doing a carbon fiber layup schedules, it led us to making flat mounts for everything that goes on the roof. You know our roof has a curve to it both for appearance and aerodynamics and water shedding and all that sort of thing, and previously things like the exhaust fans just mounted directly to that with a slight bit of curvature. And so what we did we actually built-up little bases so that the fans actually sit maybe like ¼-inch above the rest of the roof so that if there is any water pooling or anything like it’s not going to right up against it with an opportunity to sit against the seal.” 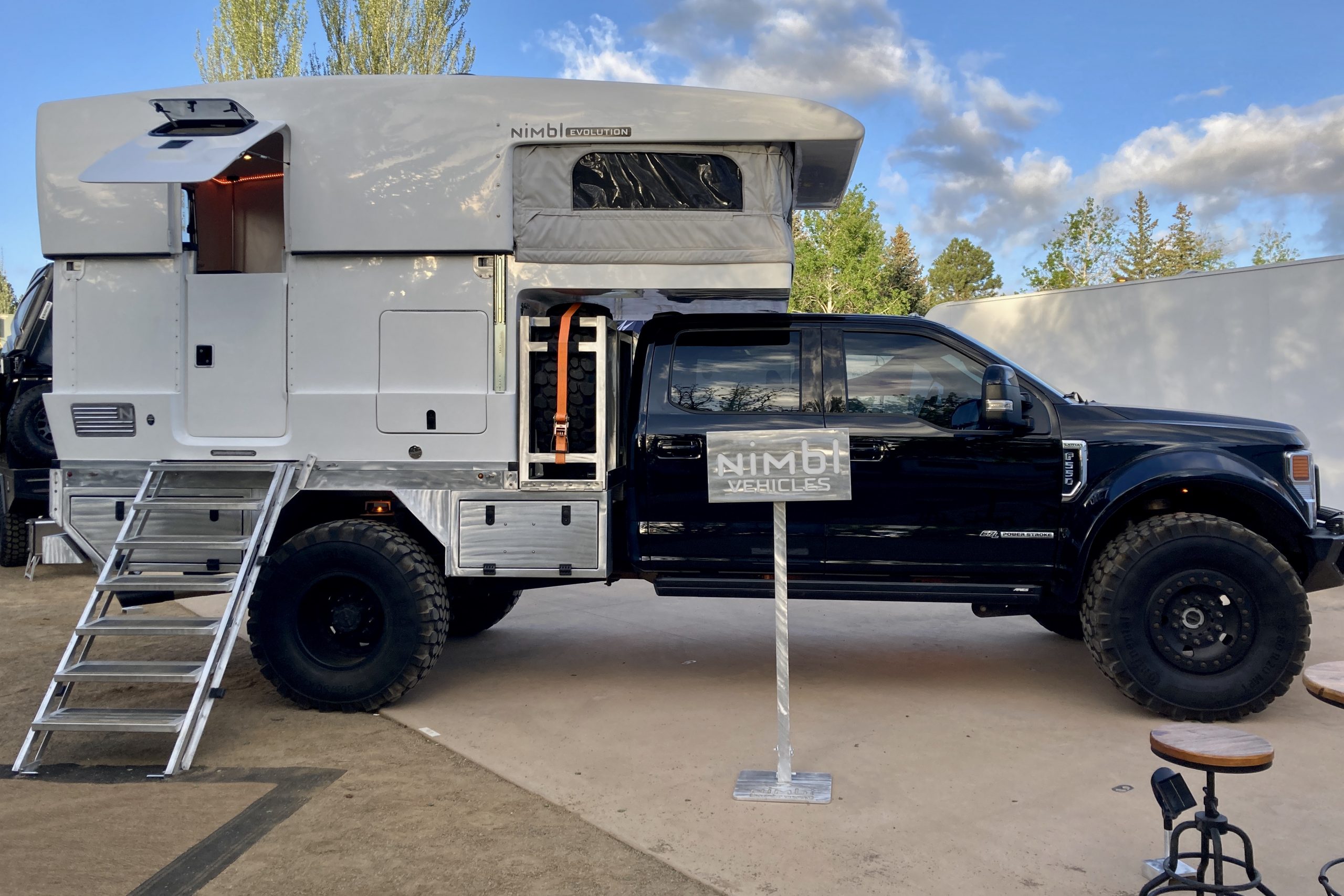 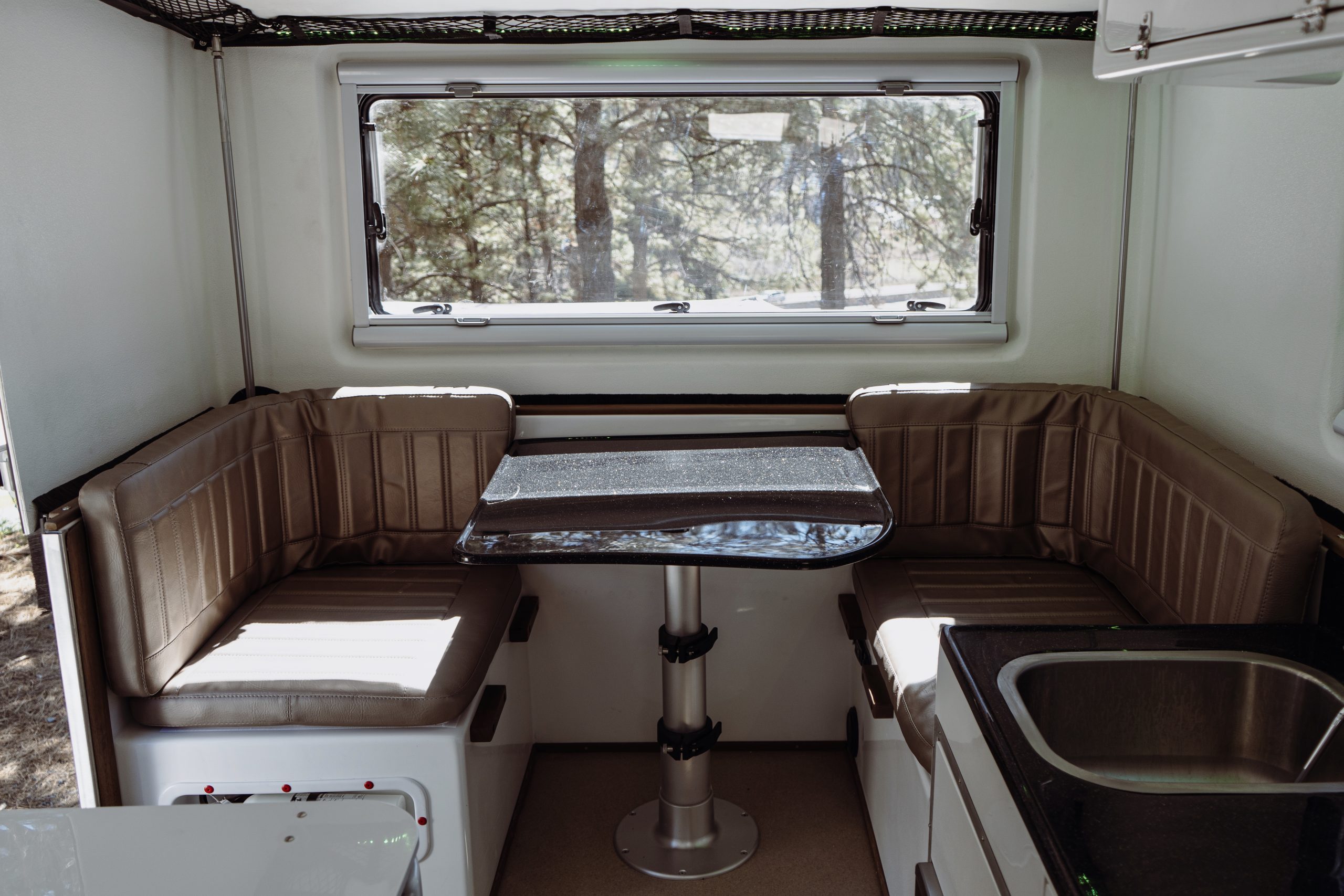 While the need to go with new windows was the driving force behind making new molds, countless other changes were made to improve the Nimbl Evolution even more. From a distance the camper looks largely the same, Turner said, but to the trained eye you can really see the differences. The company has already sold two carbon fiber campers.

“The new molds allowed us to do a number of other things,” Turner explained. “It allowed us to greatly improve the interior lighting in the camper, so there’s a lot more LEDs, a lot more task lighting. We really try to learn from our customers and what our customers are asking for. Some of the other companies in our space, you know they use the old Ford line, ‘any color that you want as long as it’s black’ or ‘you can have anything that you want as long as it’s exactly what we’re doing.’ I’ve always been of the opinion that at our price point our customers should really get the camper that they want, so we always look for ways to say yes when customers make requests, because we learn a lot and if one customer is asking for something it’s probably something that others are going to find desirable as well.”

“We’ve also done some really cool things where we can toggle between colored lighting and white lighting,” he said. “I actually had my personal camper setup like that. There are times when having white light is great, like when you’re cooking and when you’re eating, but I also like to be to look out at night and so it’s really nice to be able to toggle a switch and have red or blue lighting so you actually have enough light to actually see things without interfering with your night vision. And that plays off the new windows that we have so we’ve gone from having one really large window in the back and a square one on the side to having an exact same size window on the side as well. So it really opens up the space and allows much more light in. So you can look out from a window here and a window there, it’s a hundred little details like that that we’ve been able to improve upon.” 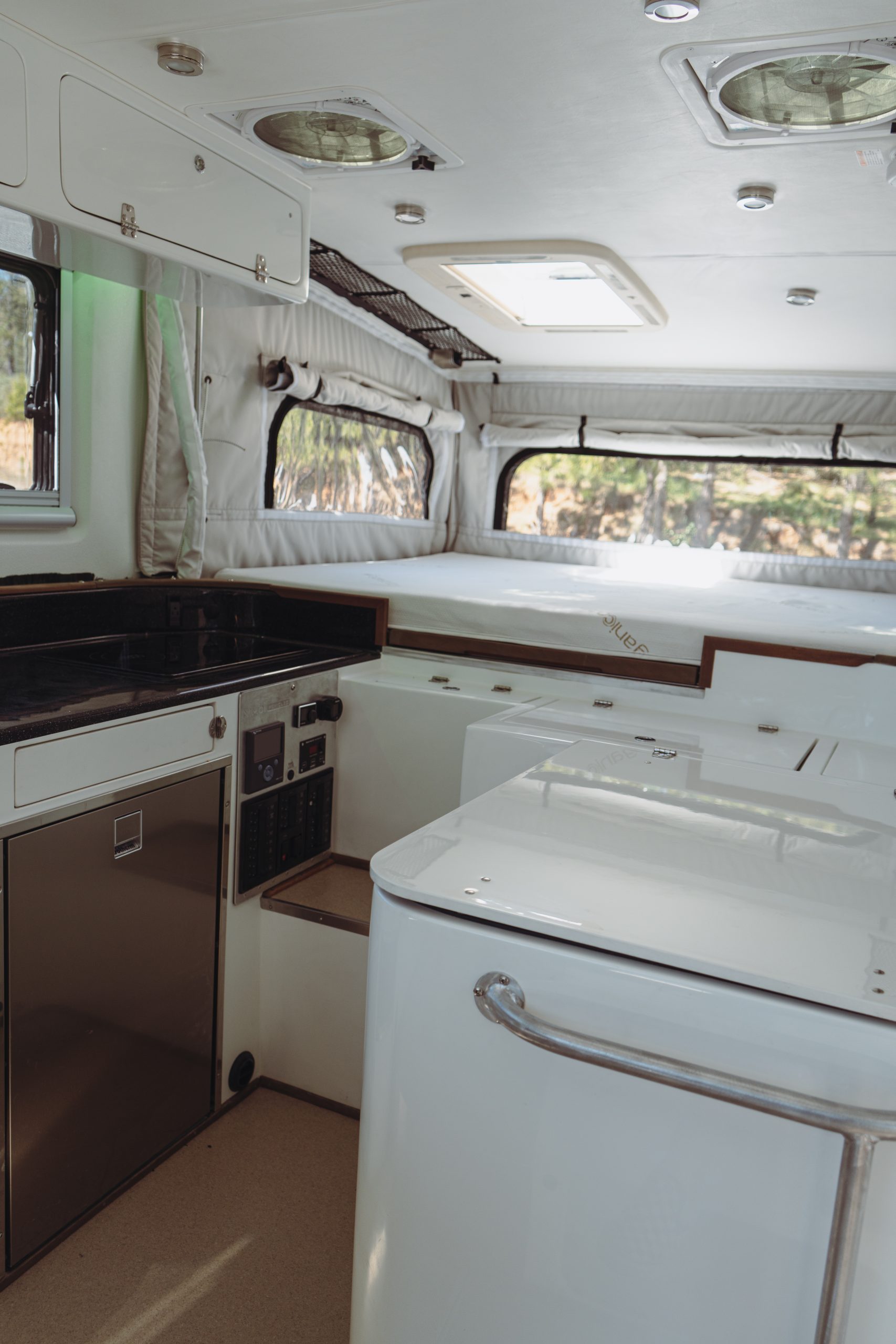 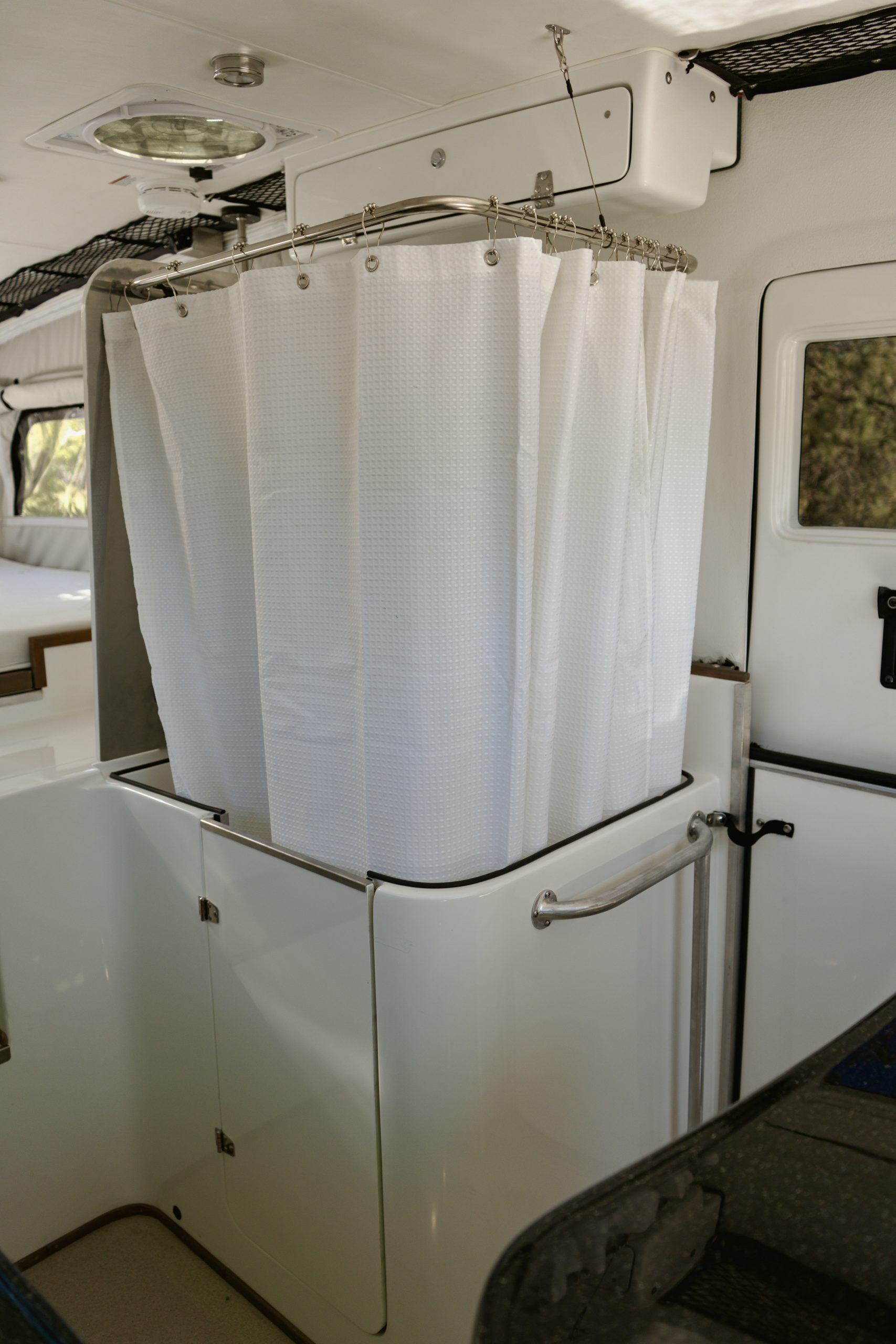 Since the relaunch from the XPCamper V1 to the Nimbl Evolution in April 2020, the company has made a series of upgrades to the truck camper’s electrical system as well. Customers can opt for an off-grid electrical system that offers an impressive 760 watts of solar, 1,080 amp hours of lithium batteries, and a 3,000 watt inverter with a built-in transfer relay. This additional power is welcome, because with the exception of the space and water heaters, which run on either gasoline or diesel, nearly everything in the camper runs on electricity including the dual induction cooktop, the DC compressor refrigerator, and the DC air conditioner. The latter is a fairly recent offering with customers having the option of going with either a Cruise-N-Comfort DC air conditioner or a Dometic RTX-2000 DC air conditioner that pull only 42 amps and 19 amps DC respectively. Turner says the 6,800 BTU rating of the Dometic is more than enough for the camper.

Of course, making a solar-powered truck camper is possible only if you have a large bank of lithium ion batteries and a solar power system with the moxie to keep those batteries charged. The company’s 1,080 amp hour lithium setup should suit almost anyone who likes to camp off-grid, but choosing the right lithium battery is also important. For Nimbl Vehicles management, the decision to go with Battle Born was an easy one to make.

“We use Battle Born for our lithium batteries,” Turner said. “Battle Born is close to us, we like that they actually build their batteries in the US. They’re not just OEMing something from China. They still have components and things from China, but they actually build the batteries here in the US. It’s owned by two guys who were Northern Nevada MBA graduates, one is a PHD electrical engineer, Dennis Pherris, so they actually have some IP around their battery design and we had them put our whole battery system together for us. So that’s worked out really well for us. They do a really nice job preconfiguring everything before it even leaves their factory. We try and support US manufacturers only.” 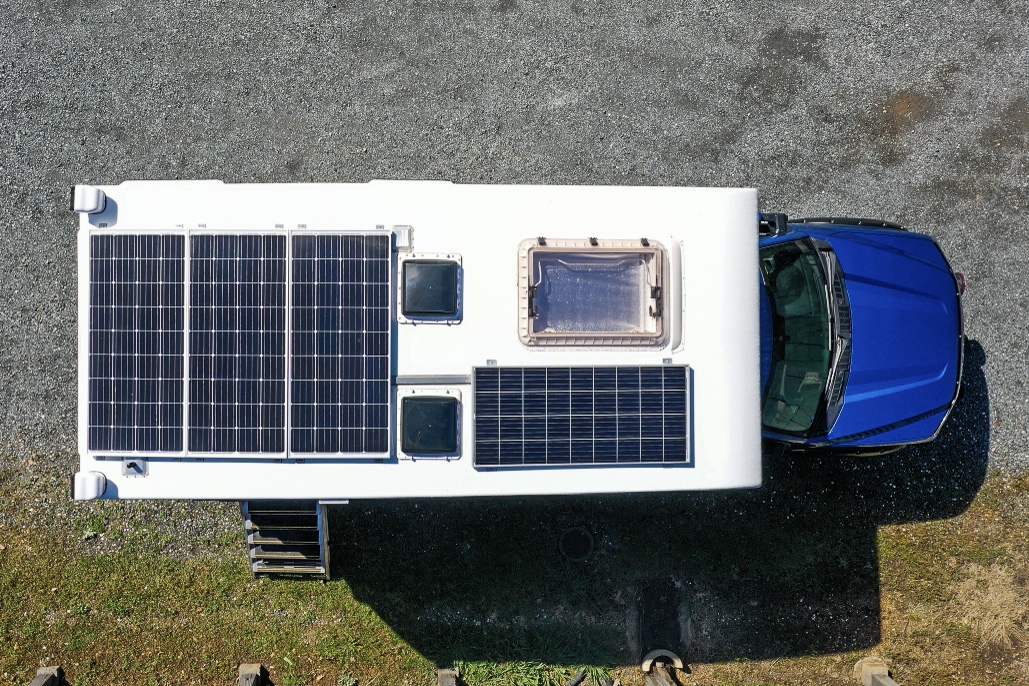 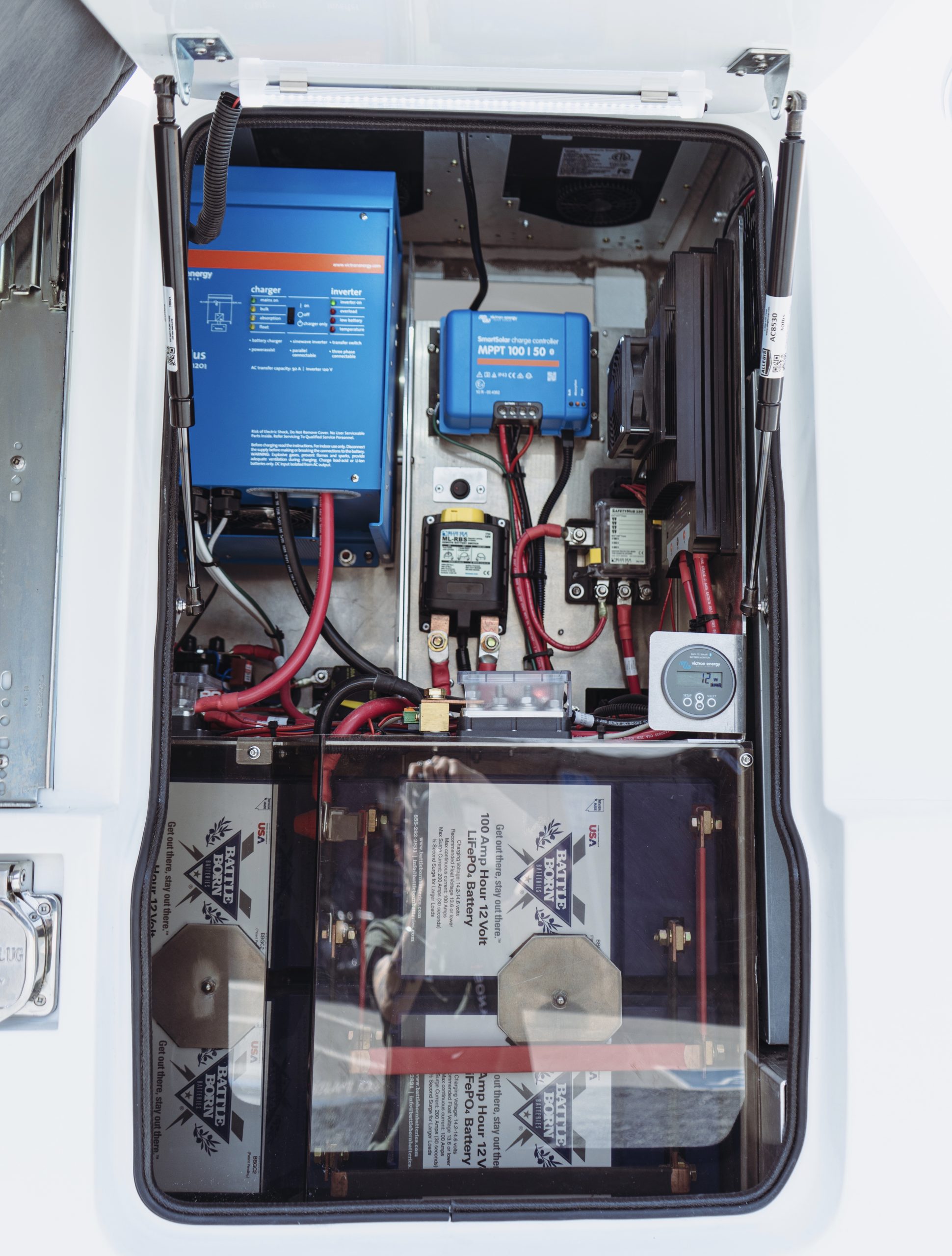 “We’re now using Tern Overland’s Powered Roof Hatch, which is really nice, which has integrated lighting in it as well, and then we’ve upgraded the exhaust fans to one’s that have rain sensors in them so that automatically close. We’ve been through a couple of iterations with the dinette. The XPCamper had made the dinette table out of Baltic birch plywood, which is a perfectly acceptable material, except I don’t like to have wood anywhere inside the camper, it’s just a thing that we have. We did one out of honeycomb aluminum, and we were happy with the way that was working, but wanted to have something with a little bit more organic, less angular shape so now we’re actually making it out of carbon fiber. There’s been this journey with carbon fiber and know we feel like we really understand how to do it and make things out of carbon fiber,” he said.

This show season, Nimbl Vehicles will be displaying the new carbon fiber Evolution on a brand-new platform, a Ford F550 sporting size-41 super single tires. The Nimbl Evolution, which weighs a svelte 2,500 pounds, doesn’t need a F550 and it’s 9,500-pound payload, of course, but the company decided to have a little fun this show season by building an over-the-top rig that gets people’s attention. Yet, if the demand is there, the company might offer the Evolution on the brawny F550, in addition to the standard Ford F350. The idea for building a big F550 show rig, according to Turner, came from Graham Bell, a Nimbl Evolution owner and influencer who has plans to take his rig to Central and South America later this year with his family.

“We have a pretty close partnership with Graham Bell in that we’ve put him and his family in the original prototype camper and they’re taking it down to Latin America for 18 months,” Turner said. “We’ve known them for years, they’re good people and good communicators in documenting their lifestyle and experiences. They’re also kind of the right demographic for us. A twenty-something influencer is probably not going to resonate with our typical customer base. Our typical customer base is a bit more mature, and in a slightly different place in their life. Most of the time our customers, if they’ve had children, are empty nesters, they getting out and living the best life that they can, but they also the disposable income to invest in a certain amount of comfort. So the Bell’s, with having two adult children, they’re somebody that our customers can relate to and they have a great story too.” 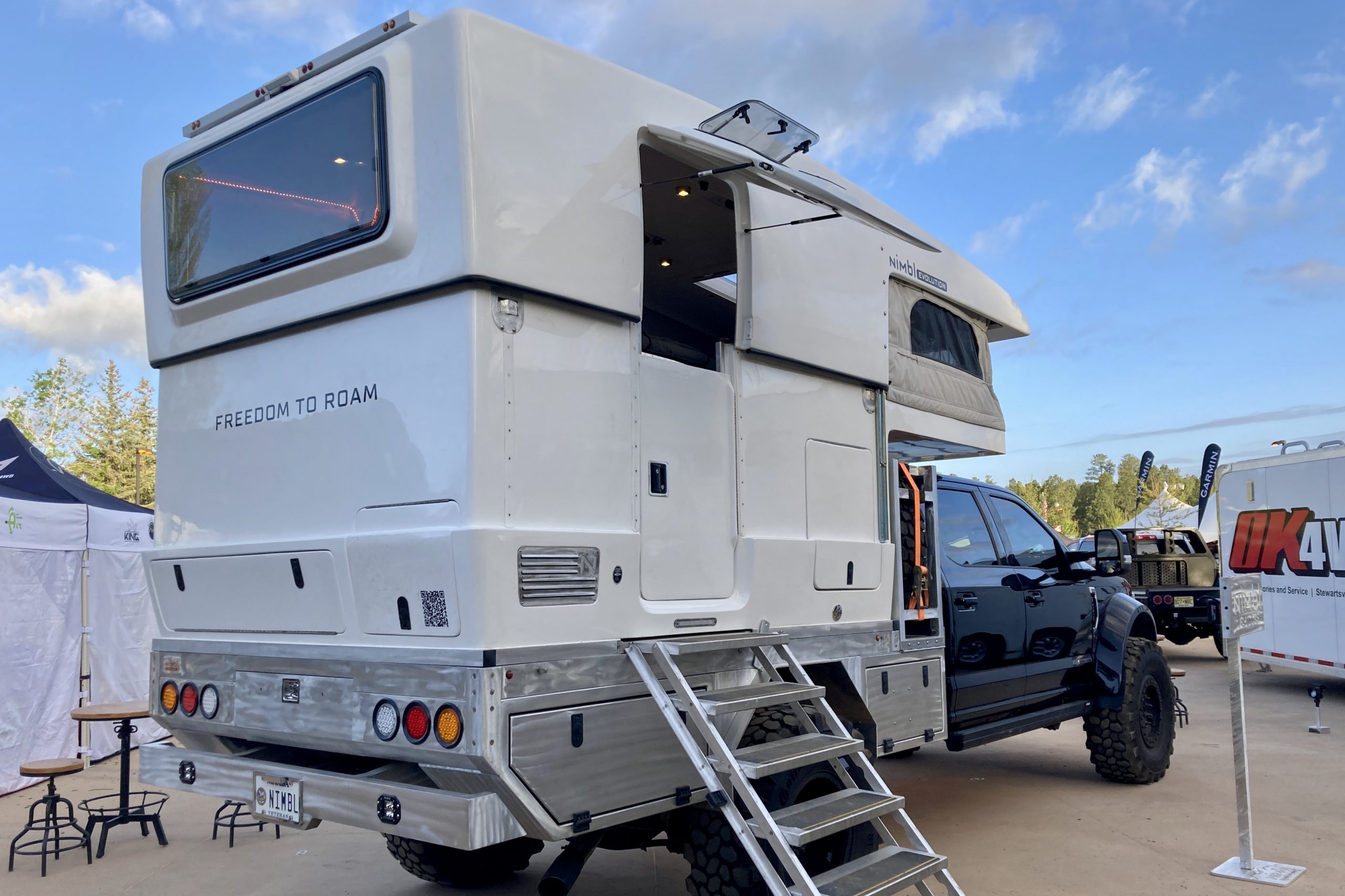 I spent the last couple days installing the two 60 watt solar panels on the roof of my Wolf Creek 850 truck camper. After giving it some serious thought, I decided to place the two [read more]

Enrollment in the 2021 Truck Camper Adventure Rally is now open, but will close on February 5 for name tag processing. To date, over 160 campers and their owners have enrolled in what will probably [read more]

Just one look at an EarthRoamer and you’re hooked. That’s because the EarthRoamer XV-LTS is pretty amazing. Imagine a solar-powered, 4×4, luxury truck camper rig on steroids and you’ve got the EarthRoamer. The company calls [read more]