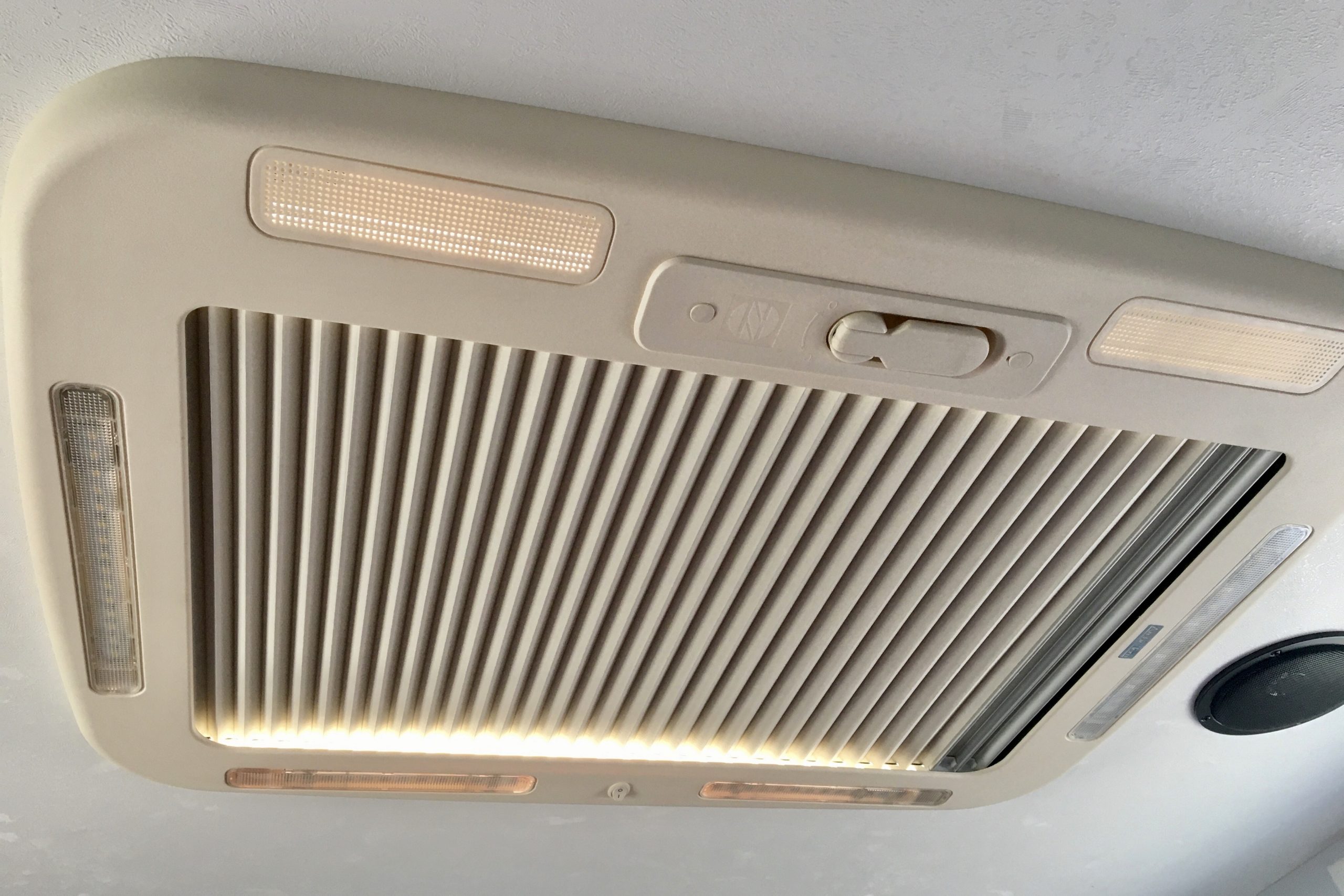 Ask any truck camper owner and they will tell you that ventilation is important. Not only can proper ventilation keep your camper cooler in the summer, but it can also prevent condensation from accumulating inside in winter. It’s also a great way to remove odors. When it comes to air flow, the roof hatch is a great option. Unfortunately, there’s a lot of junk out there. We had already gone through the hassles of owning a substandard roof hatch in our last camper, so it was important to make the right decision for our new Bundutec Roadrunner truck camper. After looking at all of the options we decided to go with the best, most reliable roof hatch in the market: the Arctic Tern Roof Hatch. This is a review of that product.

The Arctic Tern Roof Hatch is made by the good folks at Tern Overland. Founded in 2017 and based in Prescott, Arizona, Tern Overland is known for making some of the best windows, roof hatches, and doors in the marketplace. The company has grown exponentially since then and now partners with an impressive number of companies as OEM, including Hallmark, AT Overland, Kimbo, and Bison Overland and recently entered the truck camper marketplace with its own outstanding truck camper design called the Aterra. Fortunately, the company will also sell it to DIYers as an aftermarket accessory, which is something that not all manufacturers are willing to do. As a local, Arizona-based company, we knew about Tern Overland and its reputation, so for us it was an easy decision to go with them.

Why buy a roof hatch rather than a standard 14×14-inch RV vent? Well, for one the 700x500mm hatch is twice as large as the standard 14×14-inch vent. This larger size means better air flow and a terrific view of the stars. It can also be used as an egress during a fire. Sure, RV fires are rare, but they do happen. It’s best to be prepared. Finally, the roof hatch lets in a tremendous amount of natural light. For campers with excessively dark interiors and few windows, this can go a long way towards making the interior of a camper feel light and airy and less gloomy, especially during overcast days and during the winter.

Made in Europe, the Arctic Tern Manual Roof Hatch is a quality product. The shell consists of a thick and rugged ABS plastic with an insulated, double pane UV resistant acrylic dome. It features an attractive sliding screen and pleated blind with a reflective top for maximum thermal efficiency. The roof hatch sits about 5 inches above the roof line with a little over an inch below the ceiling inside the camper. According to the company, the dome is 5.25 times more thermally efficient than glass and 2.14 times lighter. Moreover, the dome is 17 times more resistant to impact than glass and does not shatter, important considerations in areas prone to getting hail storms. Better yet, the roof hatch can be closed or opened without having to open the screen or blind. Being able to do this prevents mosquitoes and other flying insects from getting in the camper. As any angler will tell you, being able to do this is great especially in places where there are large number of insects.

The Arctic Tern Roof Hatch offers a number of notable features. One of the best is the “breathable” seal along the top that prevents the entry of dust, yet allows for the hatch to vent in summer even with the blind completely closed. For those who have owned a Dometic Heki Vent, this is a major improvement that prevents damage to the hatch from overheating. The manual version incorporates an audible alarm at the full open and full closed positions. This alarm prevents over torquing the mechanism and causing permanent damage to the latching mechanism. It also comes with four LED light strips, which by themselves, provides more than enough light for the entire cabover. It does not feature a fan, but that’s a good thing. Otherwise, it would obstruct your view and prevent you from using it as an emergency egress point. The electric roof hatch lists for $1,457. Every hatch comes with a one-year warranty. 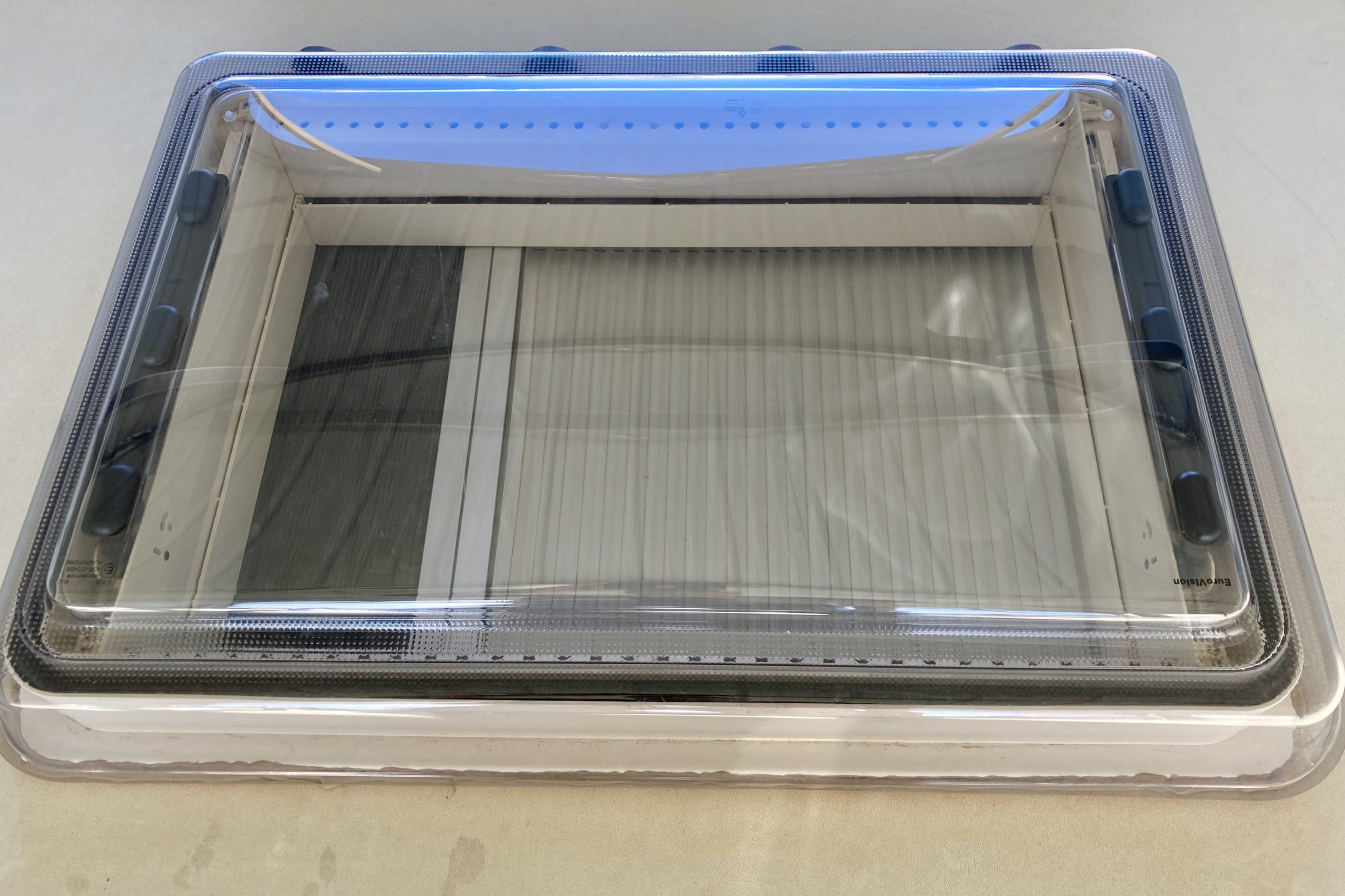 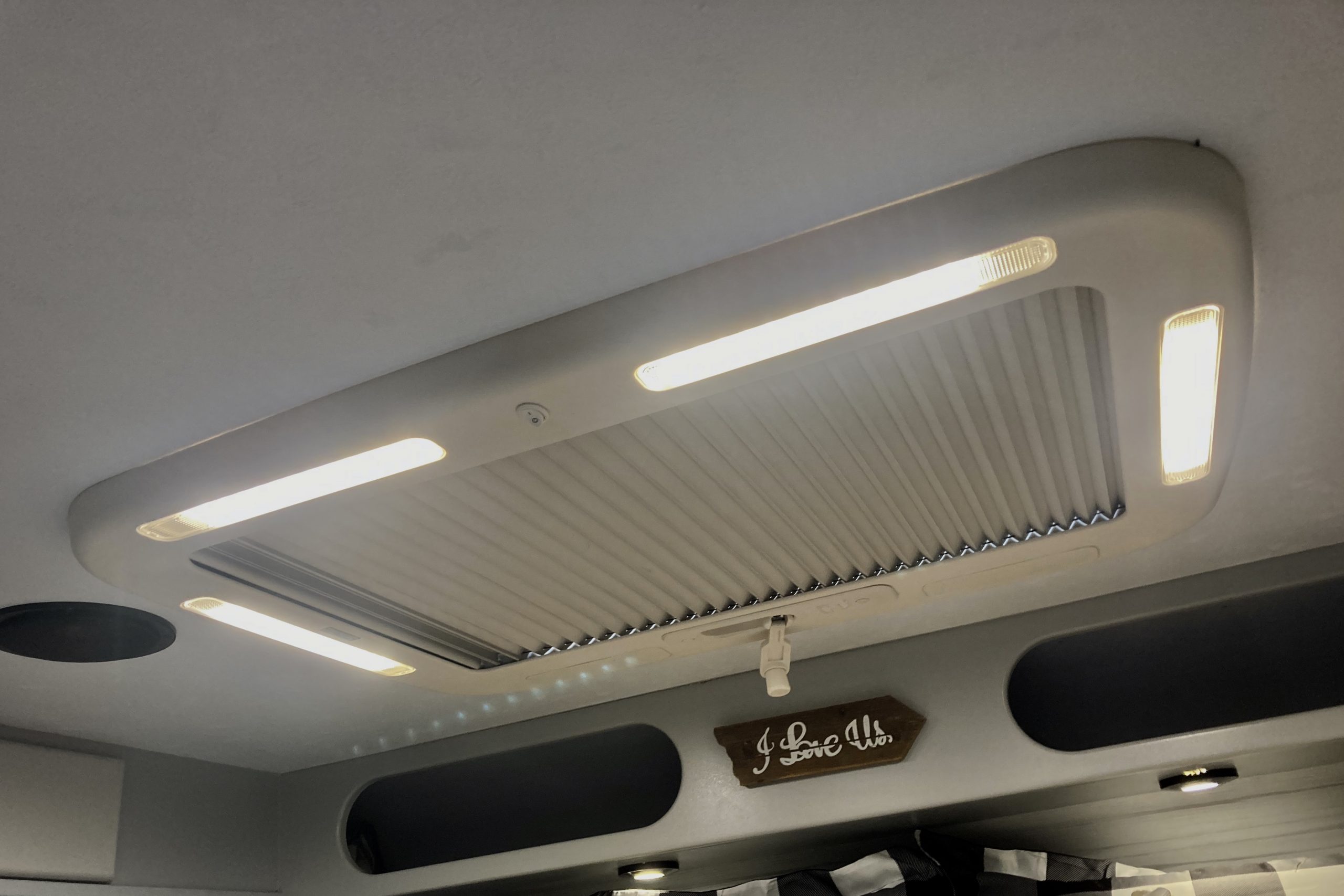 Unfortunately, Tern Overland no longer makes a manual version of its roof hatch. The company decided to ditch the manual version in 2021 and offer two electric versions—standard and deluxe—with a Bosch drive motor instead. The “deluxe” version not only is electric, but also includes a rain sensor and a remote. The good news is that in all versions, including the manual, the Arctic Tern Roof Hatch remains essentially the same. Why did Tern Overland decide to ditch the manual version like the one we have in our camper? Because it’s easier to install and use (more about the former under installation). According to the company, the electric versions are far superior with far fewer installation issues, yet they also include an emergency crank in case something does fail.

The Arctic Tern Roof Hatch is made for roof openings measuring 500x700mm with an expansion ring available to accommodate roof openings from 70mm to 84mm. The surface of your roof needs to be flat; otherwise, you’ll need to construct a base that conforms to the curvature of your camper/vehicle. In addition, the thickness of the roof needs to be between 1-1/4 and 2-3/4 inches thick, but if your van or camper’s roof isn’t, a special roof thickness kit will need be ordered. Mounting is accomplished through the use metal clips and adhesive. For the job, you’ll need several tools: a jig saw or other appropriate cutting tool to cut the hole in the roof for the hatch, a carpenter’s framing square, a drill with a 1-inch hole saw, a piece of 24 x 32-inch plywood to make a template, a marking pen, a Phillips screwdriver, a small flat-bladed screwdriver, and a tube of high-strength polyurethane adhesive though Sikaflex 252 or a similar adhesive may be used. 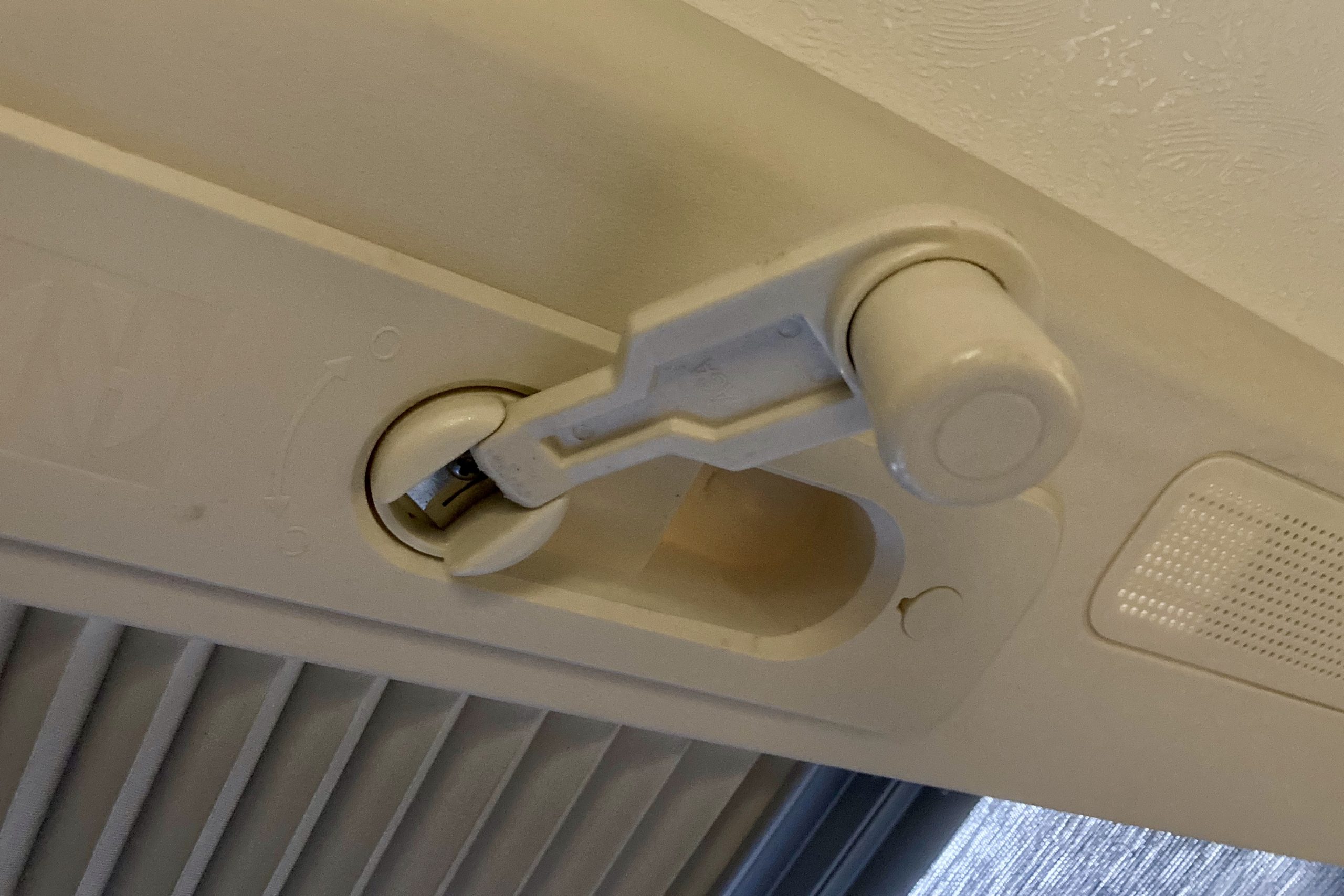 The installation of the manual roof hatch is fairly straightforward. The six-page installation instructions are well-written, well-illustrated, and easy to understand. The only issue we had during the installation was with the hand crank assembly and the associated alarm and light assembly. It’s important to read the directions carefully. Getting the handle positioned with the right amount of tension took a couple of times to get right—it was either too tight or not tight enough—but after three tries we finally got the locking tension just right. Important: when in the locked position the handle is supposed to feel springy. Over tightening the drive system can result in permanent damage to the locking assembly. Truth be told, we disconnected the audible alarm and rely only on the light because we found the high-pitch alarm annoying (perhaps that’s another reason why the company decided to ditch the manual version).

The instructions recommend installing a wind spoiler, but honestly, our builder didn’t install one and we’ve been fine in the 16 months we’ve owned our camper (according to the instructions, a wind spoiler is needed because the foam used in the hatch seal is a filtering foam material that is intended to block dust, yet allow a small amount of air through the cabin). So far, we’ve driven over 22,000 miles in heavy winds across the country with zero issues. The front slope of our truck camper apparently channels the air away from the front edge of the hatch well enough to prevent issues. We assume that the spoiler also prevents wind damage to the hatch itself, which is common with hatches made by the competition. More about this below. 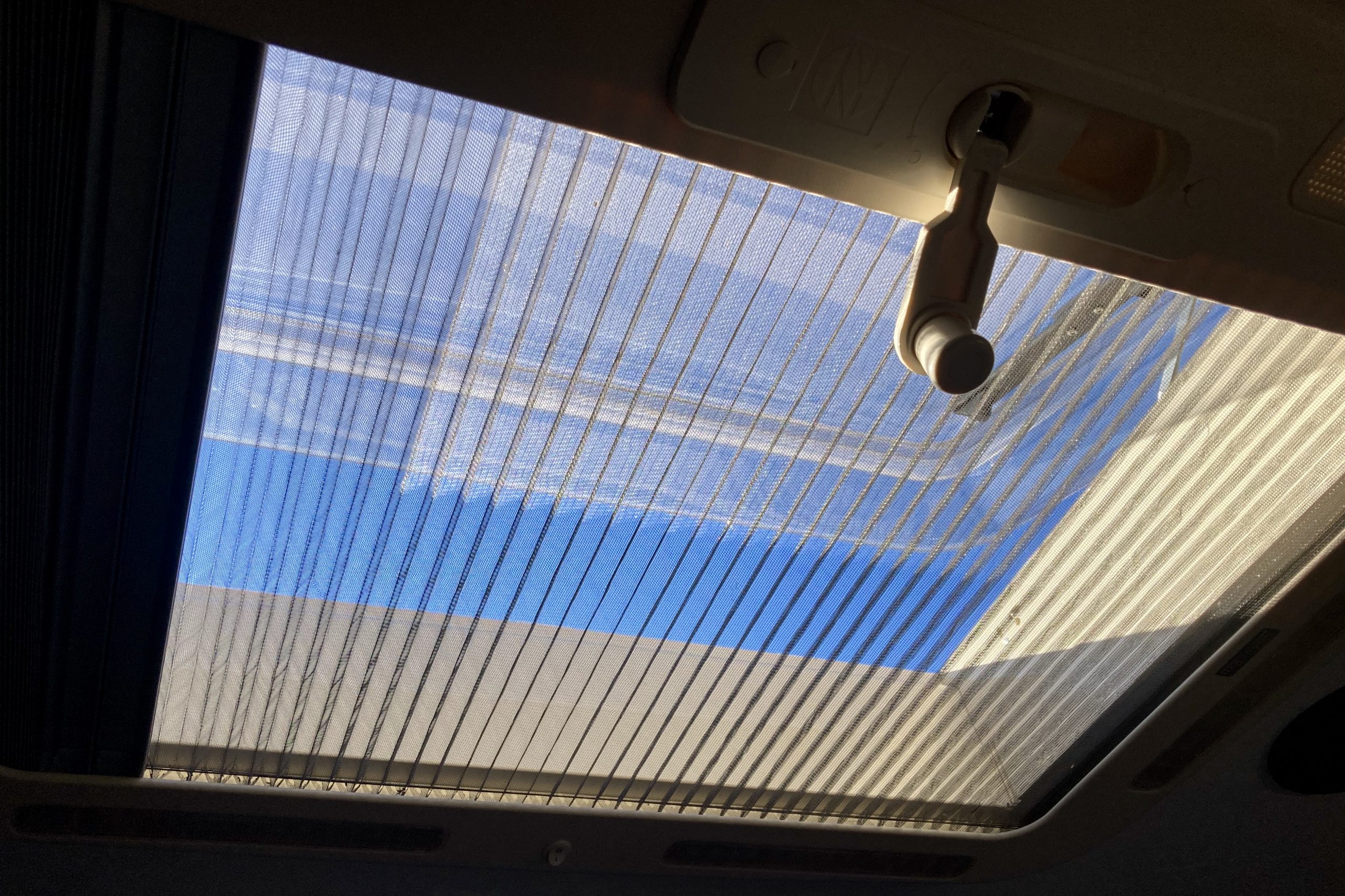 The real test for a roof hatch is how well it holds up to day-to-day use. A good roof hatch must be able to withstand high winds, highway speeds, scalding heat, driving rain, and hailstones. Other roof hatches, like AirXcel’s Skymaxx, have failed miserably in this regard with a high failure rate reported by several companies. Compared to the Skymaxx, the ubiquitous Heki Vent holds up better, but is still prone to costly parts failures (getting a replacement dome for our old Heki vent set us back over $700). On the other hand, the Arctic Tern Roof Hatch has a four-year record of success with a very low failure rate. Our Arctic Tern Roof Hatch has performed admirably with zero issues in the 16 months we’ve own it, plus we’ve driven over 22,000 miles during that time.

Have we had any issues with the manual hand crank? None. We actually like it. Compared to the Skymaxx and Heki Vent, it’s easy to operate and doesn’t require an open screen/shade assembly to use it like the Heki Vent. The only thing we wish this roof hatch had is a rain sensor, but the company has addressed this issue in it’s brand-new deluxe roof hatch, which comes with not only a rain sensor, but also an electric opening and closing mechanism and a small remote.

The Arctic Tern Roof Hatch is a terrific product. It’s a major improvement over the AirXcel Skymaxx and features just enough enhancements to make it a better choice over the ubiquitous Heki Vent. At $1,457, the electric version of the Arctic Tern Roof Hatch is expensive (the electric deluxe lists for $1,743), but like we always say, you get what you pay for. Wouldn’t you rather go with a hassle-free product like the Arctic Tern Roof Hatch, than be forced to repair or replace a substandard roof hatch made by the competition? Plus when you go with Tern Overland, you get the peace of mind knowing that you are getting the best. If you ever do need a replacement part, they are affordable and relatively easy to get. All it takes is a phone call. What would we rate the Arctic Tern Manual Roof Hatch? On a scale of 1 to 5 stars with 1 being the lowest and 5 being the highest, we enthusiastically give this product a rating of 5 stars. It’s a great product and one we highly recommend buying. 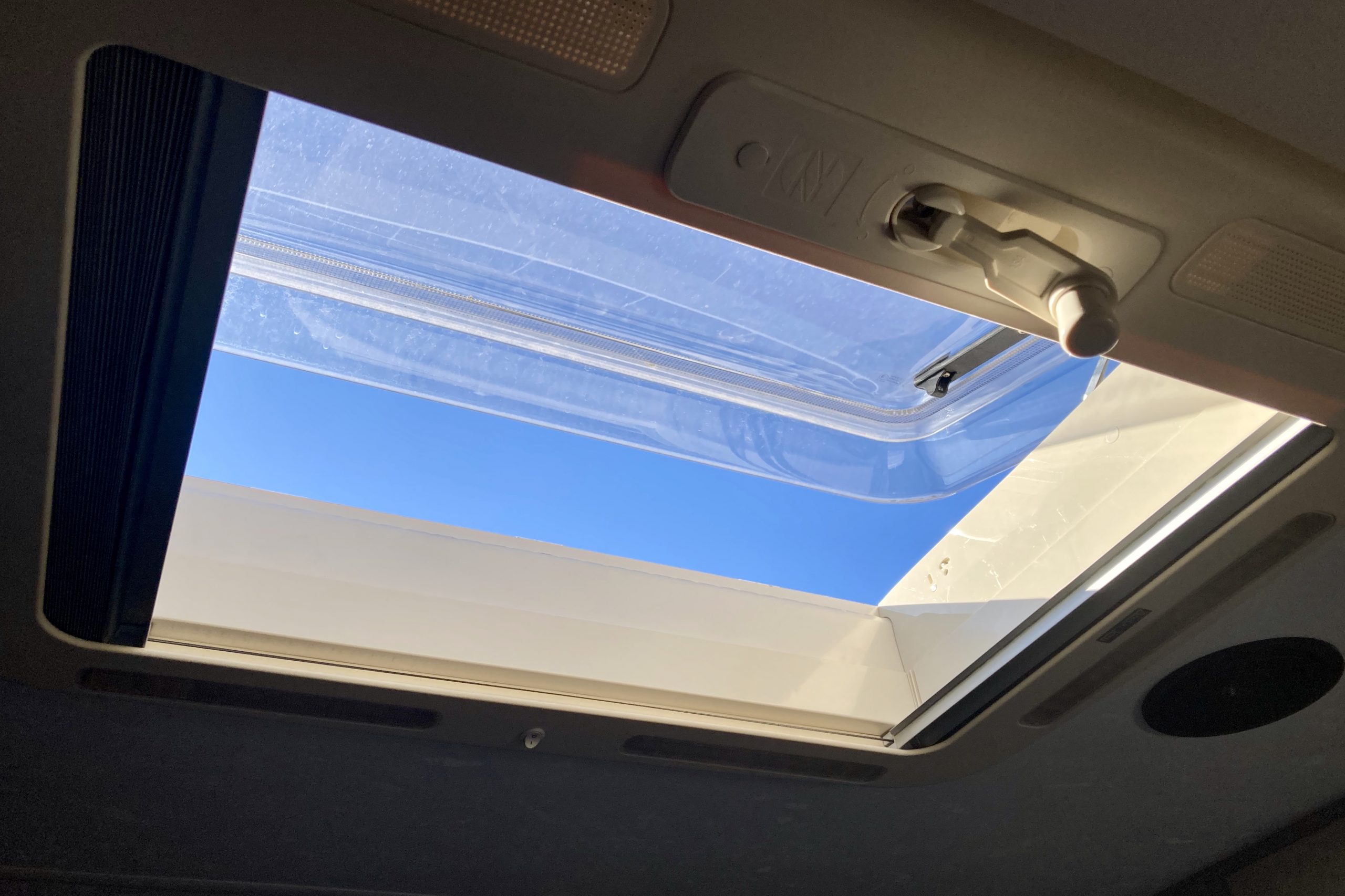 AT Overland will be debuting the new Aterra XL flatbed camper at the 2021 Overland Expo West in Flagstaff, Arizona, 24-26 September 2021. Engineered by David Soza of Tern Overland and collaboratively built with AT [read more]

We love the Overland Expo. New truck campers and expedition rigs are rolled out for this big show every year, and for the 2022 Overland Expo West, Bear Adventure Vehicles rolled out an impressive rig [read more]