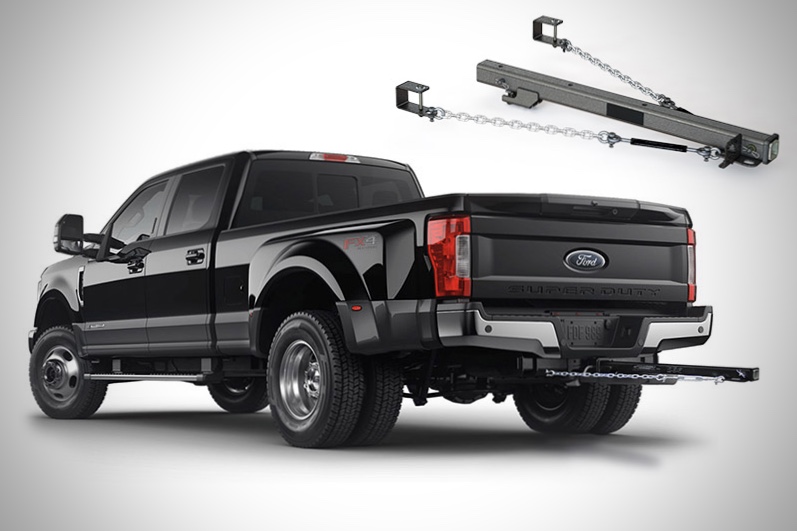 Washington-based Torklift International just announced the release of the newest edition to its heavy-duty towing line—the SuperHitch Cannon, the only receiver extension for new Ford trucks.

“Since 2017 Ford Motor Company has been producing Super-Duty trucks with a factory trailer hitch featuring a 3-inch receiver opening,” explained Torklift President Jack Kay. “This poses a problem for folks who want to tow a trailer while hauling anything that extends past the trucks bed like a sled deck or a truck camper that has a rear overhang because before the Cannon extension was available, no extension was compatible.”

The Cannon inserts into the factory hitch to extend the trailer hitch out to the trailer. It comes in three lengths—36 inches, 42 inches and 48 inches. It can tow up to 7,200 pounds with 720 pounds of tongue weight when used with a weight distribution system. It comes with the patented lateral support safety chains to prevent side-to-side movement while towing, a very special set bolt system that easily locks it into the factory hitch and is also internally reinforced for maximum strength.

“The truck industry is really starting to compete when it comes to towing, we are not surprised that even the factory receiver opening is bigger than the standard 2-inch or even the larger 2.5-inch opening everyone was used to—just one more way to be bigger and badder,” said Kay. “We named it the Cannon because like an actual cannon, it’s designed for extreme use over long periods of time.”

To learn more about the SuperHitch Cannon, visit the Torklift website at www.torklift.com.

When it comes to truck campers and extreme boondocking, few people have gained more knowledge and experience than Bryan Appleby. Known on the Internet forums as “bka0712,” Bryan has been a full-time RV’er since 2009. [read more]

The 2019 North American Truck Camper Owner’s Association (NATCOA) Rally was completed last week and by all accounts was a big hit. A total of 68 persons from 11 states and Canada attended the four-day [read more]

Rig building is one trend that’s definitely on the rise in the truck camper community. But this process is so much more than properly matching a truck camper with a truck—as critically important as that [read more]