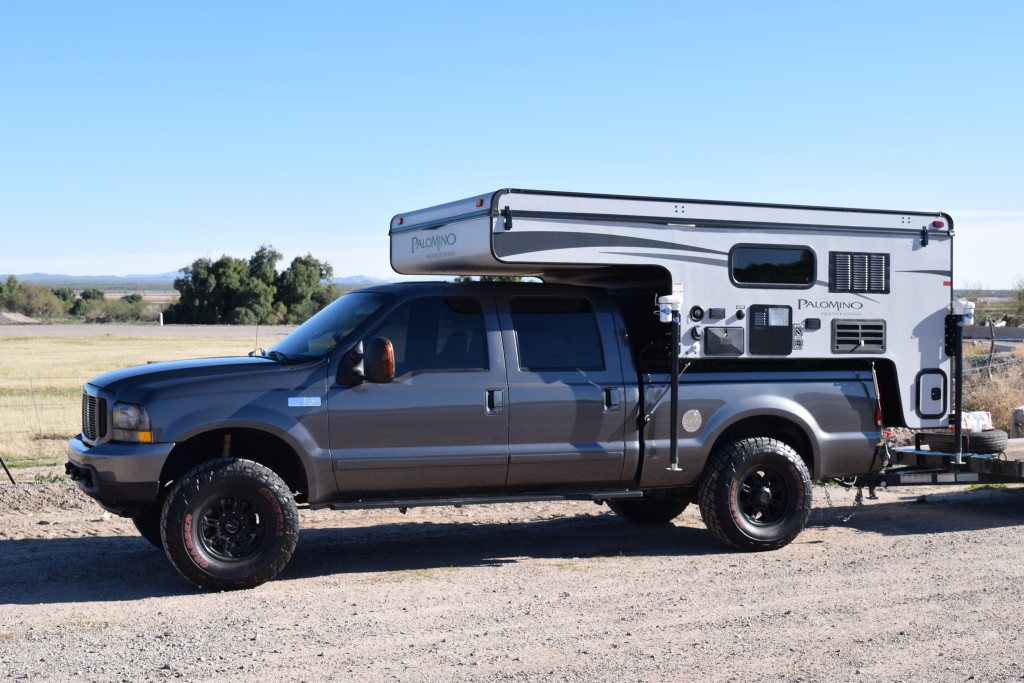 There are many things I like about traveling and exploring in my truck camper. Two things that I particularly enjoy doing are meeting people and seeing the rigs that they own. On a recent outing to Box Canyon, Arizona, I came across this rig owned by Matt and Kristin Pegan of Mesa, Arizona. It immediately caught my eye. Matt and Kristin’s rig is a 2003 Ford F-350 pickup truck mated with a 2016 Palomino 1251 pop-up truck camper. The couple purchased this Palomino pop-up six months ago, which also happens to be their first truck camper. I spoke with Matt recently to learn more about their truck camper and the process they went through to buy and build this cool-looking off-road adventure rig.

First, a few words about the camper. If you haven’t been in a Palomino pop-up truck camper lately, you need to do so. This isn’t the same pop-up you saw or heard about five years ago. In general, quality was lacking in the old Palomino truck campers, but it’s obvious that Forest River Inc., the manufacturer of the Palomino, took those criticisms to heart and made some serious changes. The Backpack Edition of incorporates all of these improvements and includes several options and upgrades. Owners also get their choice of either a pearl colored or a light gray exterior with black hatches, covers, and jacks. I don’t know about you, but seeing the same old white exterior gets rather bland. It’s nice to see more and more truck camper manufacturers offering options in colors. For Matt and Kristin’s rig, the gray color with black accents makes for an impressive looking match with their dark gray 2003 Ford F-350.

The Palomino 1251 makes a terrific off-road rig. With the popup lowered, the camper is only 6 feet high. It weighs just 1,795 pounds dry, is only 7 feet 1 inches wide, and has a floor length of 8 feet 6 inches. While the fresh water tank is a decent 22 gallons, the Palomino 1251 has only a 7 gallon black tank for waste water, no gray tank is offered in this particular model. This can be a downer for those who live in the east–a short hose and a small, external tank will be needed to hold gray water–but here out west, where gray water dumping regulations are more relaxed, this isn’t too big of a concern. The remaining capacities of the camper include a 6 gallon water heater, a 5 gallon propane tank, and a vented battery compartment large enough to house a single group-27 12 volt battery. And speaking of the battery, the Palomino 1251 Backpack Edition now offers a standard battery disconnect switch, reachable from the back door, and a handy exterior battery charging station. This allows you to hookup a portable solar panel, like the Renogy 100 watt solar suitcase, to the camper’s battery in only a matter of seconds. 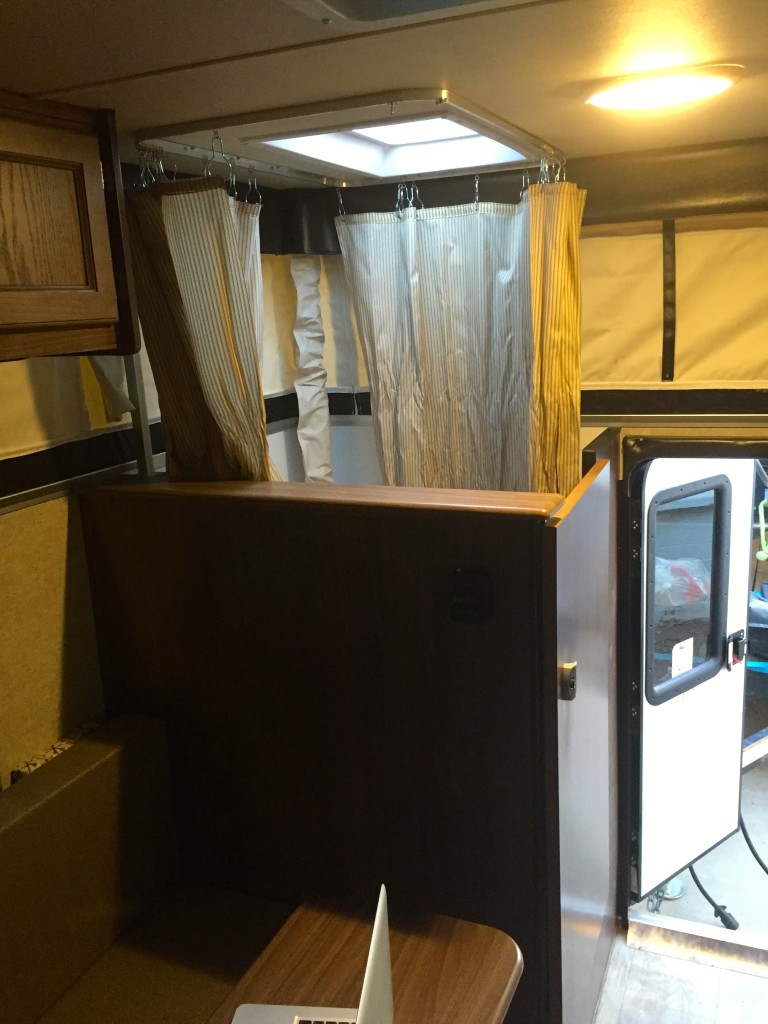 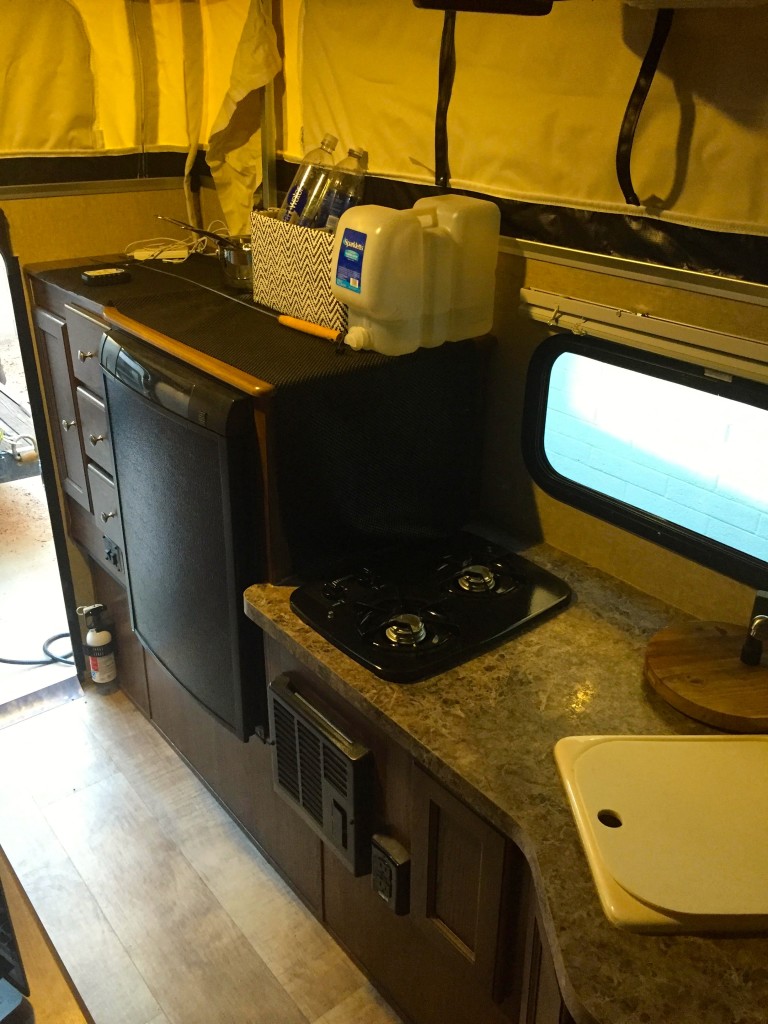 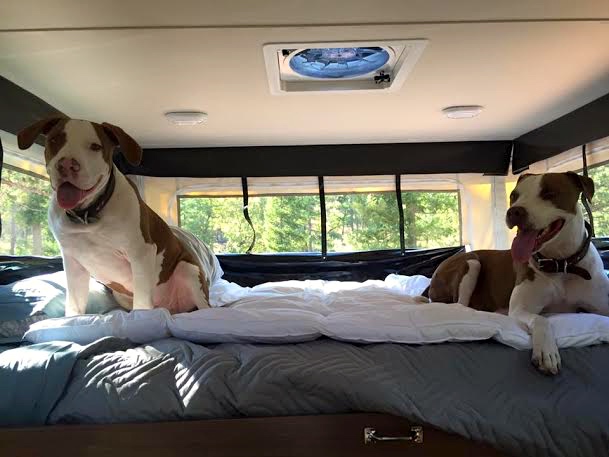 Why did Matt and Kristin choose the Palomino 1251 over other types and makes of truck campers? Like many of us, it came down to value and price. Matt and Kristin paid only $15,000 out the door, including tax and mounting. At the local dealerships they quickly found that other campers, like a new Lance or Arctic Fox, were in the high twenties, and the Palomino 1251 didn’t require a lot of sacrifice to get in it. Their options were already limited with a short-bed pickup, so they wanted something lightweight and wanted to be able to travel without a lot of wind resistance on the highway. For a camper that weighs around 2,000 pounds loaded, the Palomino 1251 has everything they wanted in a truck camper and nothing more. “We wanted something that wouldn’t limit us on where we want to go,” Matt explained. “We want to explore and not be totally weighed down with a big monster of a camper.”

What else drew Matt and Kristin to the Palomino 1251? They liked that it had both an indoor and outdoor shower and a bathroom. Originally, they were planning to buy just a base model, but Matt had several friends who talked him out of that and said he would regret not getting a full bathroom with a shower. His friends also told him that if he wanted his wife to go with him on his trips, she would want a bathroom and they were right. Another important feature of the Palomino 1251 is that it has enough fresh water to last an entire weekend. Matt and Kristin also like the aluminum frame so there isn’t a lot of wood to rot away. The color of the camper also played a big role in their decision. “We like that the gray color matches the color of our pickup truck,” he explained. “We looked at a used 2015 Palomino 1251 that was beige, and we almost bought it, but the gray color of the 2016 models matched our truck perfectly. I know it’s kind of stupid and vain, but that was important to us.” Overall, Matt and Kristin have been happy with the fit and finish of the camper and haven’t had any major issues.

As for the 2003 Ford F-350, Matt and Kristin got a good one. Halfway through the 2003 year Ford switched from the bullet-proof 7.3L Powerstroke Turbo Diesel to the troublesome 6.0L Powerstroke Diesel. Matt was able to find this truck recently on Craigslist that has the 7.3L engine and had only 127,000 miles on it. In the 18 months they’ve owned it they’ve outfitted it with a 4 inch lift, a set of Bilstein 4600 shocks, and a set of Warn premium locking hubs. They also installed a set of General Grabber 35×12.5×17 All-Terrain tires and black Rhino wheels. The truck’s engine has also been outfitted with an Edge Programmer, which has been tuned to provide more power, and a Pioneer premium sound system. The final touches to the truck include a 4 inch straight exhaust, generic LED road lights, and a Universal bedliner. 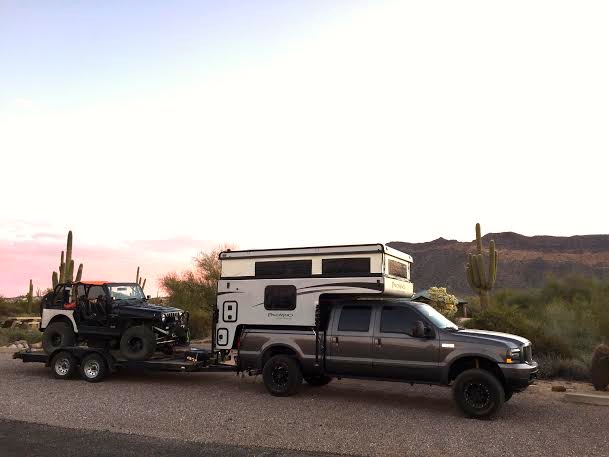 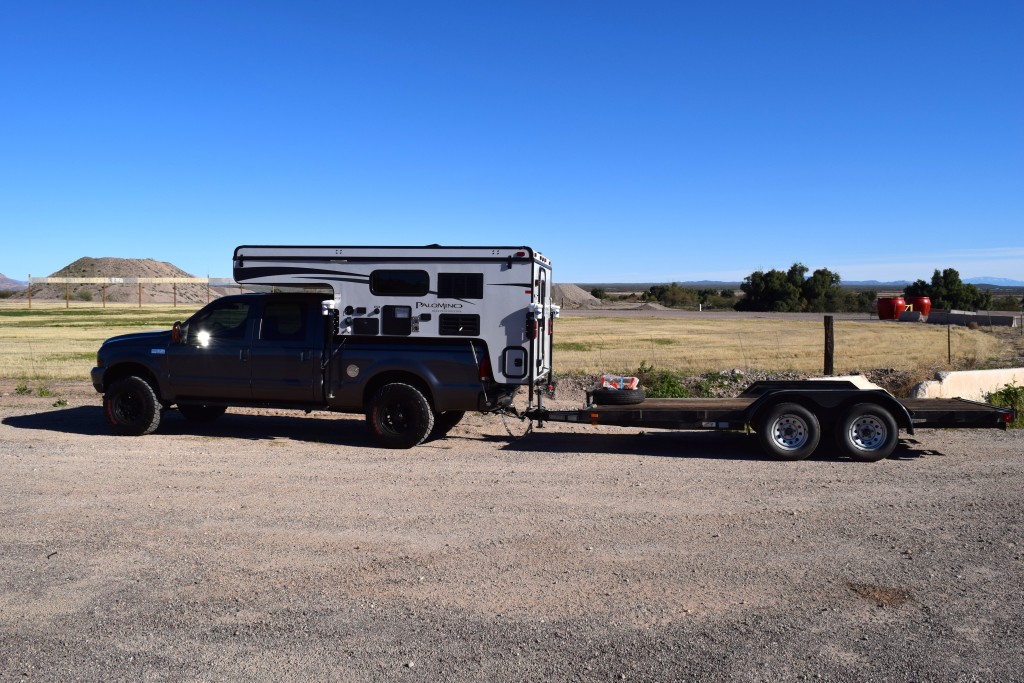 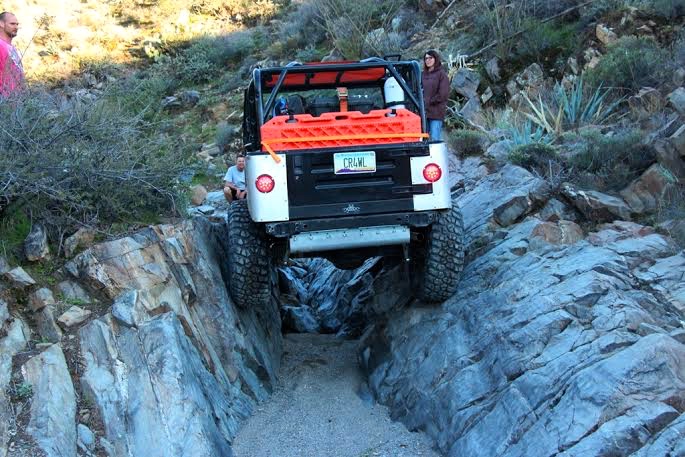 A big reason that Matt and Kristin decided to go with a truck camper, rather than a travel trailer or fifth wheel, is that they enjoy off-roading in their Jeep, and they needed to be able to tow it. The truck camper, of course, allows you to do this. That’s one of the benefits of owning one. The couple doesn’t tow their Jeep “four down.” Instead, they tow it using a flatbed utility trailer. With very little rear overhang, the Palomino 1251 is a great short-bed camper for towing. Thus far they’ve towed the Jeep to several 4×4 hotspots in Arizona and Baja, Mexico. They go down to Baja California five times a year to participate in the big off-road races. Matt just completed the San Filipe 250 where their car got second place. The San Filipe 250 is one of five off-road races with the Baja 1000 being the grand finale. The Baja also happens to be where the couple’s number one bucket list item is located. Their dream trip is an oasis beach in the small town of Mulege on the east side of the peninsula. “Here you can camp right on the beach on this flat open bay,” he said. “It’s absolutely beautiful and right on the ocean.”

The great thing about this particular rig is that Matt and Kristin didn’t have to break the bank to build it. Together, the truck and camper only set them back $33,000. That may sound like a lot, but it’s not. When you compare the price for a brand new hard-side truck camper with a slide-out and a brand new Ford F-350 pickup truck with the 6.7L Scorpion diesel, you can easily fork out $90,000 for the pair, if not more. As you can see, going used has its benefits. You don’t have to take out a second mortgage to build an impressive overland adventure rig. This rig provides all the evidence that you need that it can be done, if you can find the right truck and the right camper. It just takes research and patience.

Oregon-based EarthCruiser just announced production on a lightweight line of pop-up truck campers called the GZL. The new campers are based on a European design that was recently purchased by the company. Slide-in and flat-bed [read more]