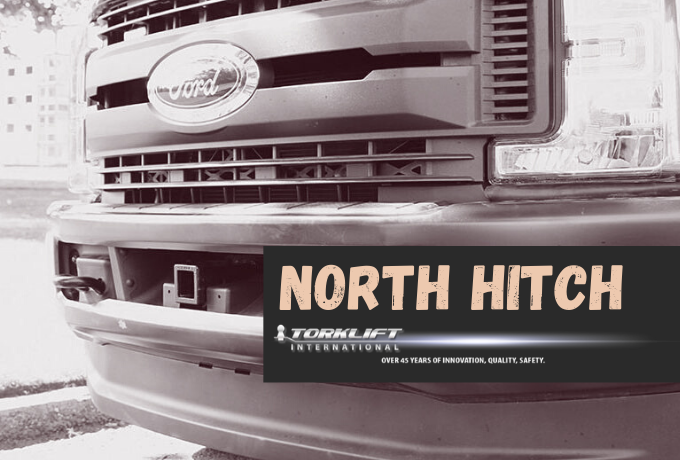 You asked for it, you got it. Torklift International just released a concealed front receiver hitch called the North Hitch. Unlike other front hitch assemblies, the North Hitch is accessible, easy to install, and will not increase the overall length of the truck, an important consideration for those who store their trucks in small garages.

The North Hitch fills an important need in the truck camper community. According to Torklift, the hitch will never impact ground clearance, nor will it ever impede engine air flow. And unlike other front hitch options, which are conspicuously mounted below the grille, the North Hitch remains hidden, yet is accessible without the need for an adapter or hitch extension. The North Hitch is compatible with a host of front hitch-mounted accessories, including bike racks, winch mounts, snow plows, and the Lock and Load, Torklift’s popular cargo security tray.

The North Hitch is engineered to meet stringent national SAE J684 towing safety standards for front hitches using US steel. The hitch is available in 2-inch class 3 designs for Ford, Chevy, Ram, and Mercedes trucks. Class 3 hitches like the North Hitch are rated to handle up to a gross trailer weight of 10,000 pounds and a maximum trailer tongue weight of 1,000 pounds. The unit weighs between 60 to 70 pounds, depending on the year, make, and model of the truck.

The Torklift North Hitch is easy to install and features a no-drill design that bolts directly to the frame using pre-existing bolt holes. According to Torklift, the hitch is being made alongside another trusted product in the industry, the Torklift SuperHitch.

Pricing for Torklift’s North Hitch starts at $299. The North Hitch is proudly made in the USA and comes with Torklift’s legendary lifetime warranty. Based out of Kent, Washington, Torklift International has been in business since 1976 when the company started making their own line of commercial-grade hitches.

Yesterday, we installed a set of Torklift GlowSteps on the back of our Wolf Creek 850. The installation was pretty easy though there’s always a bit of apprehension anytime you drill holes in your camper. [read more]

The Cirrus 820 comes equipped with a black diamond plated rear bumper, which has a large space underneath the ladder that is unused. We decided to use that space to house our new Honda EU2200i [read more]