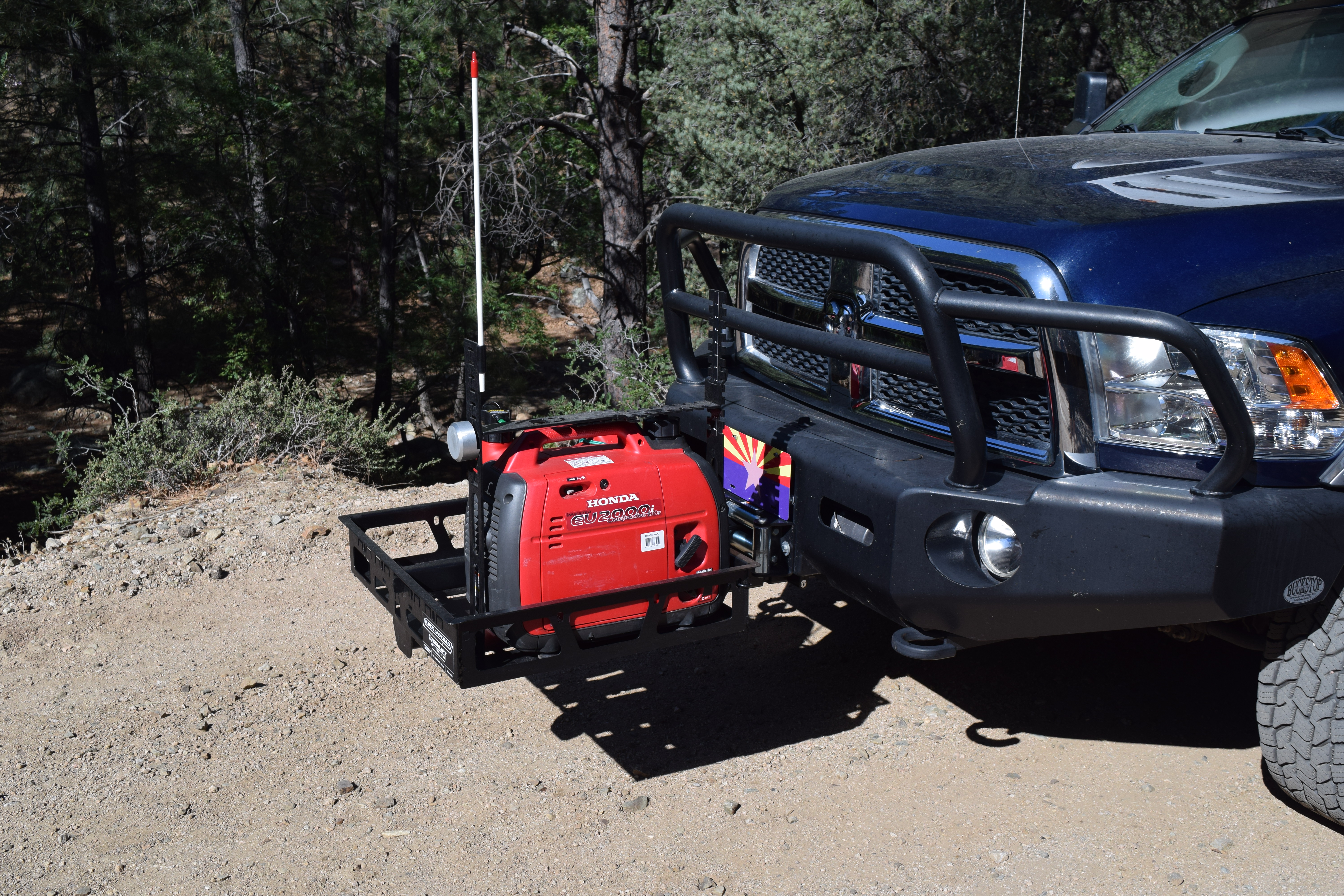 One of the biggest hassles hauling a generator on overland expeditions and campouts is where to store it. Unless you’re lucky enough to have a large truck camper with exterior storage, bringing along a generator isn’t very practical. There simply isn’t a lot of room in most campers to store even a small, 2,000 watt generator. That’s one reason why we sold our generator five years ago and built a large solar power system to keep our batteries topped off. We assumed that having a 400 watt solar power system and a 220 amp hour battery bank would be big enough to keep our truck camper powered up here in the sunny southwest. Most of the time it was. Unfortunately, overcast skies put a damper on things a few times while we were full-timing last winter. Without enough sunlight, trying to run the furnace along with the DC compressor refrigerator taxed our system. We were fine with one or two days of overcast skies, but anymore than that would drain our AGM batteries below 50 percent, something that you rarely want to do if you want your batteries to last.

The solution, as we saw it, was to buy another generator to keep our batteries charged on cloudy days, but where would we keep it stored? Our camper has three storage compartments, but none of them are large enough to store a small generator. Sure there’s enough room inside the camper, but we didn’t want to smell up the inside with a generator and a gas can nor did we want to deal with the hassle of loading and unloading both on a daily basis while on the road. Storing the generator outside seemed like the only solution, but where? Fortunately, our friends at Torklift had already solved this vexing problem by producing a heavy-duty, maximum security cargo tray called the Lock and Load. What’s great about this cargo tray is that it mounts in any standard 2-inch receiver. We already had a 2-inch receiver built-in to our Buckstop front bumper when we ordered it, so we already had a place to mount the Lock and Load. We were good to go.

Truth be told, lots of companies make cargo trays, but what makes Torklift’s Lock and Load different is that it also provides much-needed security for valuables like a generator. The Lock and Load is able to do this by incorporating an adjustable, solid steel security strap and a tamper proof, high-security puck lock into the design. It’s pretty ingenious how everything fits and works together. The design, in fact, is so clever that Torklift should patent it. As you know, the theft of portable generators is a big problem in the RV community. We know several people who’ve had their generators stolen on outings. One of our neighbors, who had his mounted on the A-frame of his Toy Hauler, even had his stolen right in front of his house. So having a cargo tray that not only can carry things, but can also secure items like a generator is a big plus. 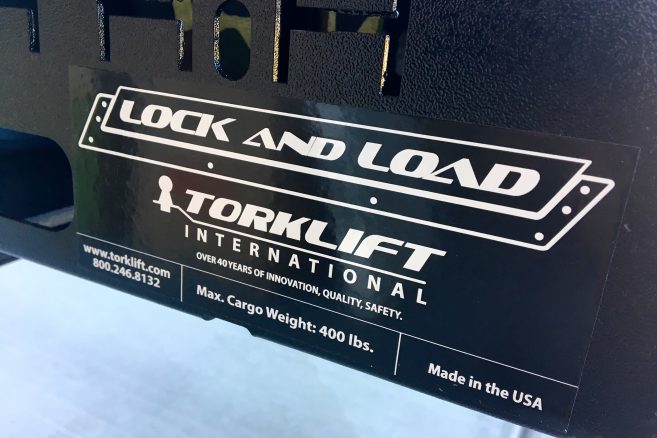 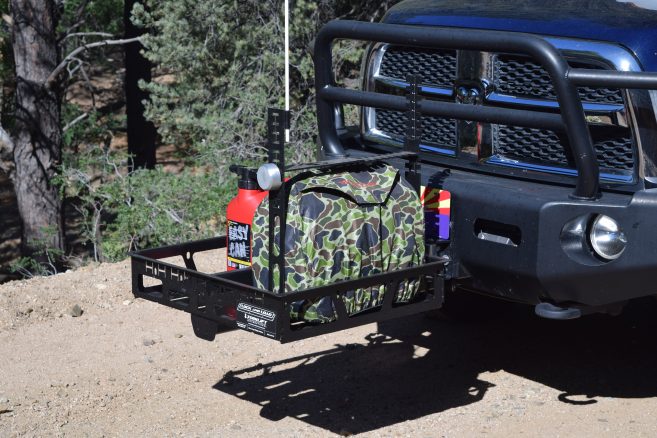 The Lock and Load is a heavy-duty piece of hardware with an emphasis on the word heavy. Made of a high-impact, powder-coated steel, the unit weighs a hefty 69 pounds and can haul an impressive 400 pounds of cargo. The cargo tray itself measures a spacious 27-13/16 inches long, 23-1/2 inches wide, and 23 inches high. This makes the cargo tray large enough to haul even some of the bigger, more popular generators like the 130-pound Honda EU3000iS. Most truck camper owners, however, will use the Lock and Load to haul smaller, lighter items like a Honda EU2200i generator and a large can of gasoline. For this, the Lock and Load will be more than up to the task. Like all Torklift products, the Lock and Load is made in the USA and comes with Torklift’s lifetime warranty. If any part ever fails, they’ll replace it for free. No questions asked. You can get the Torklift Lock and Load for about $450 on Amazon.com or through one of Torklift’s authorized dealers.

For most people, mounting the Lock and Load will be easy and will take just a few seconds—simply insert the Lock and Load’s shank into the receiver, insert the locking pin, and that’s it. For us and our Buckstop winch bumper, however, this process was a bit more complicated. Our bumper has a fairlead roller assembly mounted on the front that sticks out about 3.5 inches. The 2-inch shank on the Lock and Load isn’t long enough to clear this assembly for it to be properly mounted. As a result, we had to buy a 4-inch hitch extender to get the necessary clearance past the fairlead. Not only that, but the welds on top of the hitch extender had to be grinded down in order for it to be fully inserted and secured to the hitch with a locking pin. If you plan on mounting your Lock and Load on your front bumper and you have a winch, you might have to deal with the same frustrating issues, so beware. 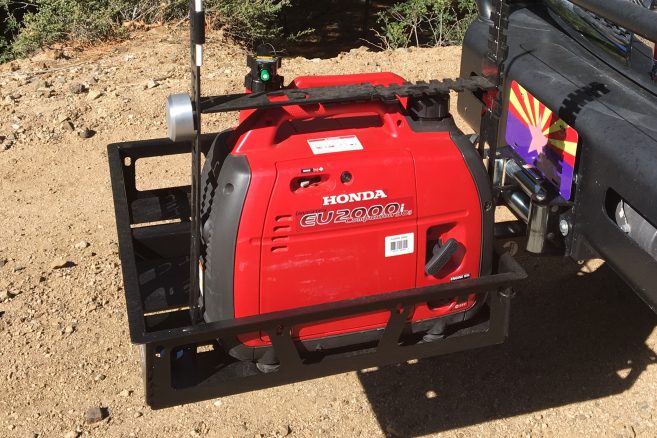 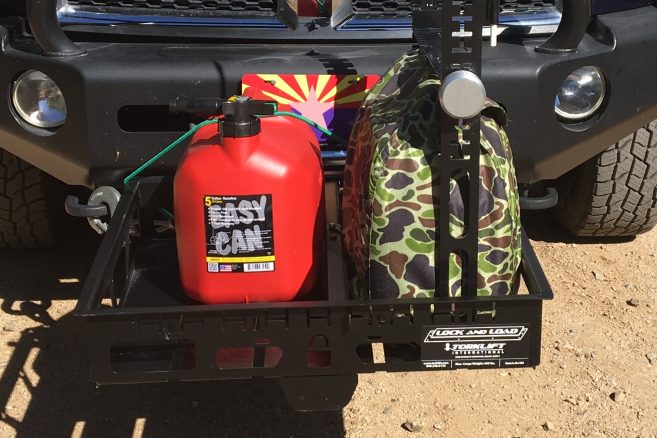 Assembling the Lock and Load’s security strap is pretty easy, though learning how to assemble it the first time you do it takes a little time. Fortunately, detailed, well-written instructions are provided by Torklift. The security strap actually consists of four independent, interlocking pieces of steel—a fixed vertical strap, a movable vertical strap, a straight horizontal strap, and a bent horizontal strap. An inner divider channel, consisting of two hinged pieces that lock into place, is also needed to keep smaller generators, like my Honda EU2000i, fixed and secure on one side of the tray. Like I said, it’s a pretty ingenious design how everything fits and works together and how the puck lock keeps everything locked and firmly in place. In fact, the design is so clever that most generators can be fully operated with it still mounted in the Lock and Load. There’s no need to ever remove it once it’s installed. For those who have shoulder and back issues, this a huge bonus.

The Lock and Load includes nearly everything you need right out of the box. Aside from the aforementioned security strap and puck lock, the Lock and Load also comes with two other important items, a handy visual indicator, which is basically a short fiberglass rod that increases safety and visibility of the unit for the driver, and license plate mounting hardware in case the Lock and Load happens to obstruct your truck’s license plate. Torklift appears to have thought of everything except for one important thing—a locking hitch pin for the Lock and Load (only a standard hitch pin that provides zero security is provided by Torklift). Without a locking hitch pin, you can simply remove the Lock and Load from the receiver and haul the entire thing away. Sure, it will take two people to do it, but it can easily be done. It would also be nice if some kind of storage bag was provided by Torklift to keep all of the parts together when the unit is not in use. Without a bag, the parts can become misplaced or lost. For now, I store all of the parts in an old folding chair storage bag. It works, but something more custom by Torklift with an attractive Torklift logo would be better. If Torklift had an accessory like this, I would buy it. 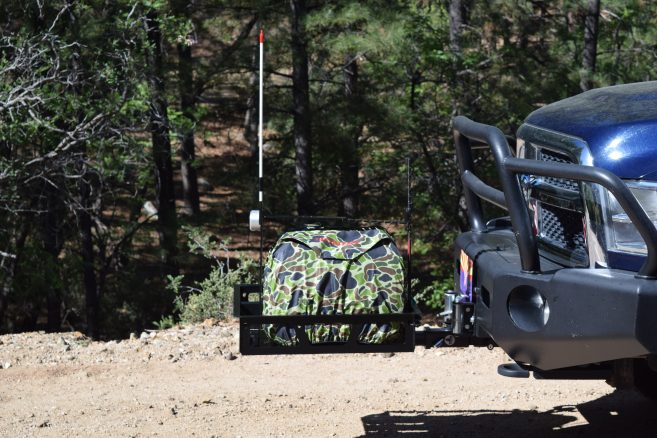 Are there any negatives associated with the Torklift Lock and Load? Just a couple. For those who like to travel off-road, the Lock and Load will reduce your approach or departure angle. Exactly how much depends on your truck and the height of your receiver. This problem can be mitigated somewhat by using a hitch riser like the Roadmaster Hi-Lo Hitch, but you still won’t have the same approach or departure angle that you would normally have without the Lock and Load. So if you plan on doing any serious off-roading, you’ll need to leave the Lock and Load at home. The other negative concerns air flow to your radiator if you plan on mounting your Lock and Load up front. The height of the generator will determine whether this will be a problem for you or not. For our Ram 3500, it isn’t a problem because our Lock and Load mounts on the bottom of our bumper and doesn’t restrict air flow. It’s a potential problem, though, and one that needs to be considered before buying a Lock and Load for your truck.

Looking for a stabilization and storage product for your slide-in truck camper? You’ve come to the right place. This article reviews and ranks the best truck camper stability products in today’s market. These products run [read more]