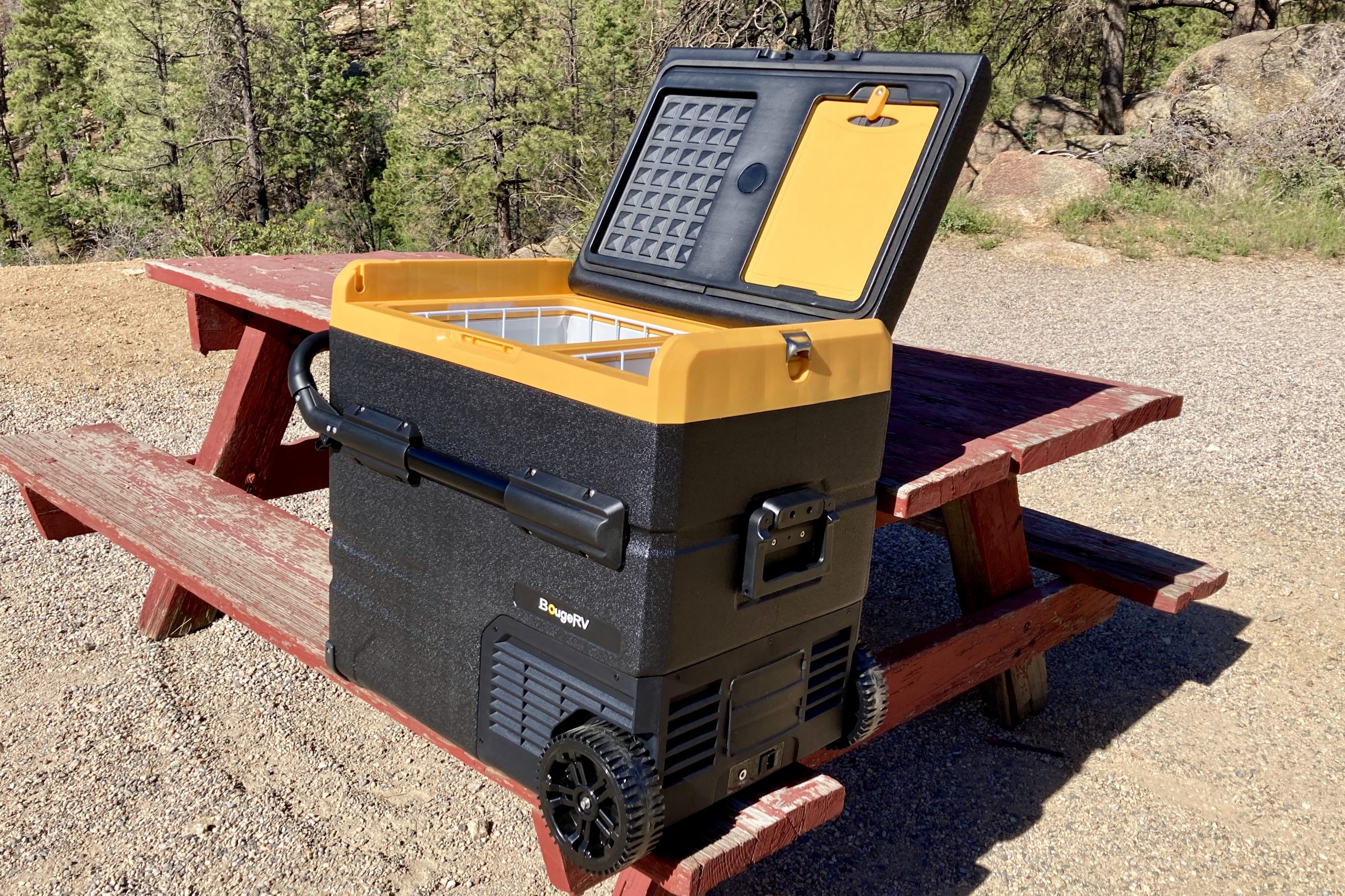 When it comes to overlanding and camping, the portable refrigerator freezer is one of the most important items in your kit, especially if you enjoy cold beverages and ice cream. Fortunately, consumers have a smorgasbord of choices when it comes to the portable refrigerator. We counted well over a dozen top companies making one. What makes the efficiency of the 12 volt portable refrigerator freezer possible is the Danfoss DC compressor, which requires a lot less power to operate, and the lithium battery, which offers a nearly 100 percent usable capacity. While it’s true most RVs already have a refrigerator, the vast majority of truck toppers, camper shells, vans, and overland rigs with rooftop tents (RTTs) don’t. This is why when we were asked to review BougeRV’s CR55 Portable Refrigerator Freezer, we jumped on it. Every overlanding rig needs a refrigerator and the BougeRV CR55 is a strong contender in this highly competitive field. This is a review of the BougeRV CR55 Portable Refrigerator Freezer.

With a capacity of 55L and a weight of 51 pounds, the BougeRV CR55 Portable Refrigerator Freezer is BIG. Measuring 24 x 16 x 23-inches and made of an attractive ABS plastic, the dual zone refrigerator freezer features two main compartments: a 40L larger compartment on the left, and a smaller 15L compartment on the right. The body is outfitted with two carrying handles, one of which telescopes, and two wheels to facilitate moving and transporting. These features are very welcome because the 51-pound unit is heavy, especially when it’s loaded with food and beverages.

The BougeRV CR55 comes with everything you need to start using it right out of the box. It comes with a cutting board and sealing strip for food prep, wire storage baskets, a bottle opener, drain plugs, and AC and DC charging cords. An optional lithium battery can also be ordered for an extra $169, which mounts internally in a special compartment located above refrigerator’s charge ports. The unit comes with a 24-month limited warranty and lifetime technical support. Made in China, the BougeRV CR55 lists for an affordable $579 on Amazon.com. 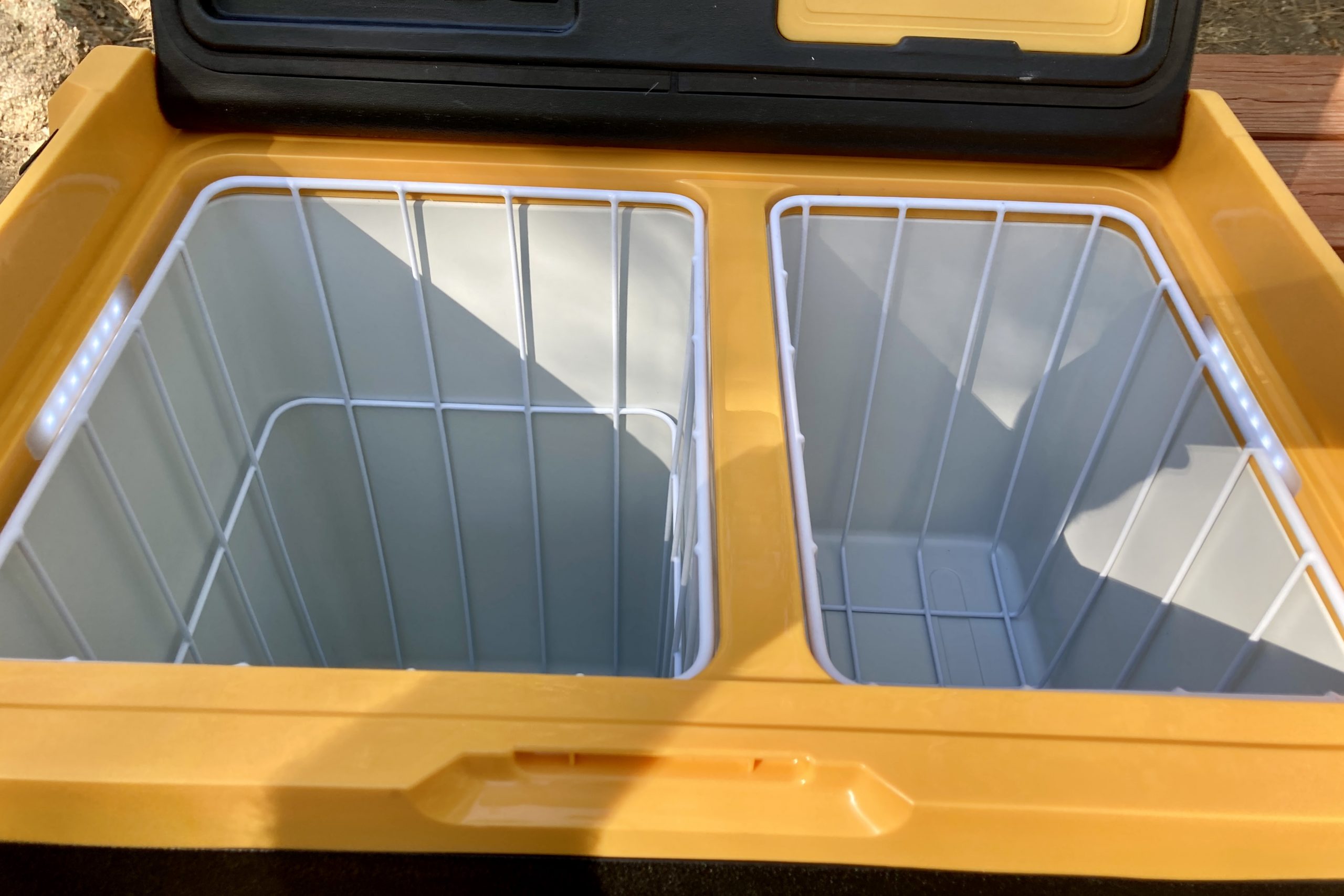 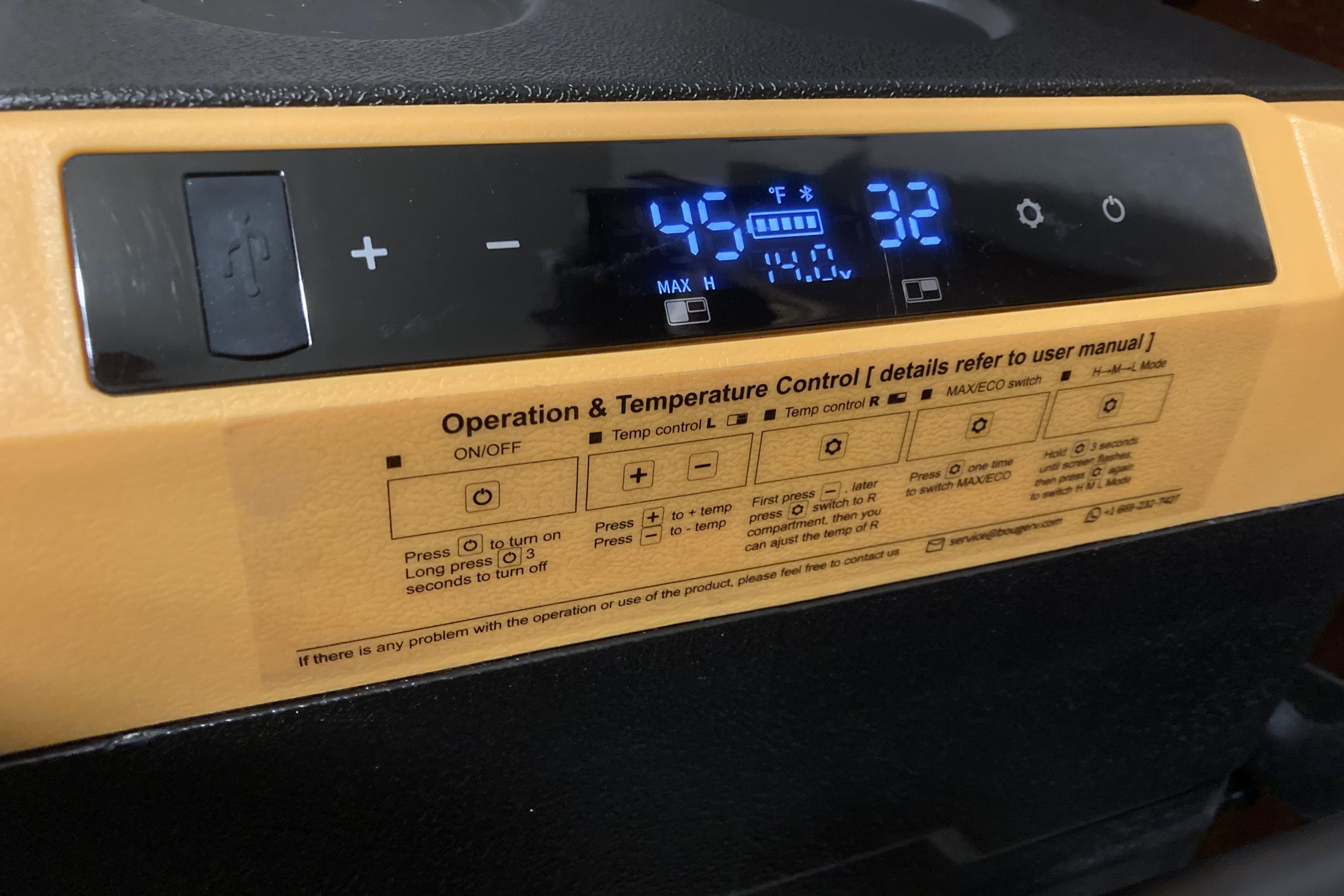 The BougeRV CR55 Portable Refrigerator Freezer can be controlled by using either the control panel keypad located on the upper left side of the unit or by using a smart phone app using Bluetooth. The control panel consists of a USB port, temperature control keypads (Celsius or Fahrenheit), left and right side LCD temperature displays, a programming button that controls access to the left and right compartments, and a power control button. The programming button is also used to control the unit’s running state from either MAX (fast cooling) or ECO (energy saving mode). To control the unit, however, we recommend using the smart phone app as the whole process of controlling the refrigerator is much quicker and easier.

Like most portable refrigerator freezers, the BougeRV CR55 can be used powered using either 12 volt DC or 120 volt AC. The unit can also be powered by using the aforementioned internal 12 volt lithium battery that can recharged using a portable 100 watt solar panel. Unfortunately, the solar port is proprietary and isn’t compatible with other portable solar panel connectors like those used by other companies like Jackery. Still, the fact that this refrigerator can be used off-grid using solar power is a major bonus, especially for those rigs without an independent 12 volt battery system.

The heart of the modern DC refrigerator is the compressor. Unfortunately, BougeRV doesn’t use the superb Danfoss SECOP compressor. Instead, the company uses a facsimile made by Wancool of China. It seems to work as well as a Danfoss compressor, though the power efficiency isn’t quite up to par to the Danfoss. The question is, how well will it hold up over time? The Danfoss is a proven commodity, the Wancool isn’t. Only time will tell. Still, the CR55, which can accommodate temperatures between 4F and 68F, features dual zones unlike many higher-priced, single zone refrigerators. Not only that, but the CR55’s two compartments can be used interchangeably, meaning either one can be used for frozen and refrigerated items. It’s use depends on the temperature. Set it low enough, and they can both be used as a freezer; set it high enough, and the both can be used as refrigerator compartments.

One feature that we really like about the BougeRV CR55 Portable Refrigerator Freezer is its battery protection mode. This prevents the refrigerator freezer from depleting your vehicle’s battery while the unit is in operation. The CR55 has three battery protection modes: H (high), M (medium), and L (low). The user manual states that the High setting should only be used when the product is connected to your vehicle’s 12 volt power. Medium or Low should only be used when it is connected to a portable battery, including the detachable lithium battery if one is installed.

During our six-months of use, the BougeRV CR55 Portable Refrigerator Freezer worked flawlessly. We powered ours using a Jackery 2000 Pro Portable Power Station, though BougeRV makes a similar power station like its 1,100 watt model that costs a lot less. Getting the temperatures right in the two compartments takes a bit of work at first, but after a couple of days, we were able to dial-in the temperatures just right. Like any RV refrigerator, the ambient temperatures play a large roll in the unit’s temperature settings. Sometimes they have to be set higher or lower depending on the temps outside.

The power consumption of the CR55 varies and is something we can easily monitor with our Jackery 2000 Pro. The highest wattage numbers observed were in the low 50’s with the compressor running, which was usually just a few minutes at a time. Most of the time, however, the refrigerator freezer drew between 30 and 45 watts. Again, the ambient temperature and the temperature settings play a large role in how much power is used. Most of the time when we camped, the outside temperatures were between 60F and 85F.

BougeRV claims that the refrigerator can function up to a 45-degree incline for short periods of time and during testing we verified this claim, though the company recommends keeping at 5 degrees of less for long periods of time. Some reviewers complained about the CR55’s noise level (45 db is the maximum noise level), though we didn’t think it was that bad. Yes, it’s noisier than our camper’s Dometic CR110 refrigerator, but we didn’t lose any sleep over it.

However, we do have one recommendation. Buy the detachable lithium battery. The extra cost is worth it. Ours didn’t come with one and we really missed having it on road trips. During the night, the internal lithium battery can be used to keep the unit powered up rather than having to lug a portable power station around to keep it going. Even if the internal 12 volt battery happens to drain during the night, it will still keep the contents of the unit cold enough until you are on the road again the next morning.

So what’s the bottom line? Is the BougeRV CR55 Refrigerator Freezer worth the $579? If you’re on a tight budget, yes. As a matter of fact, it’s difficult to find a dual zone portable refrigerator freezer in the same price range, and at 55 liters it’s larger than most. However, the look and feel of this Chinese import doesn’t measure up to some of the top brands we’ve seen like Dometic, Truma, ICECO, and ARB. On the other hand, the top brands cost a lot more. The Dometic CFX3, for example, costs $1,200; the Truma C69 a whopping $1,600! Like anything you get what you pay for, but if you’re on a tight budget, and own a truck topper, camper shell, van, or just a basic tent, then you should take a hard-look at the BougeRV CR55. Like Bob Barker says, “the price is right,” even with the optional detachable lithium battery pack. What would we rate this product? On a scale of 1 to 5 with one being the lowest and 5 the highest, we give the BougeRV CR55 Refrigerator Freezer a rating of 4 stars. Weekend warriors will love it.

Interested in buying the BougeRV CR55 Portable Refrigerator Freezer? BougeRV is now offering a 16 percent discount off the listed price for Truck Camper Adventure readers at BougeRV.com. Use the discount code “TCA14” to get the discount. The discount code cannot be used on Amazon.com 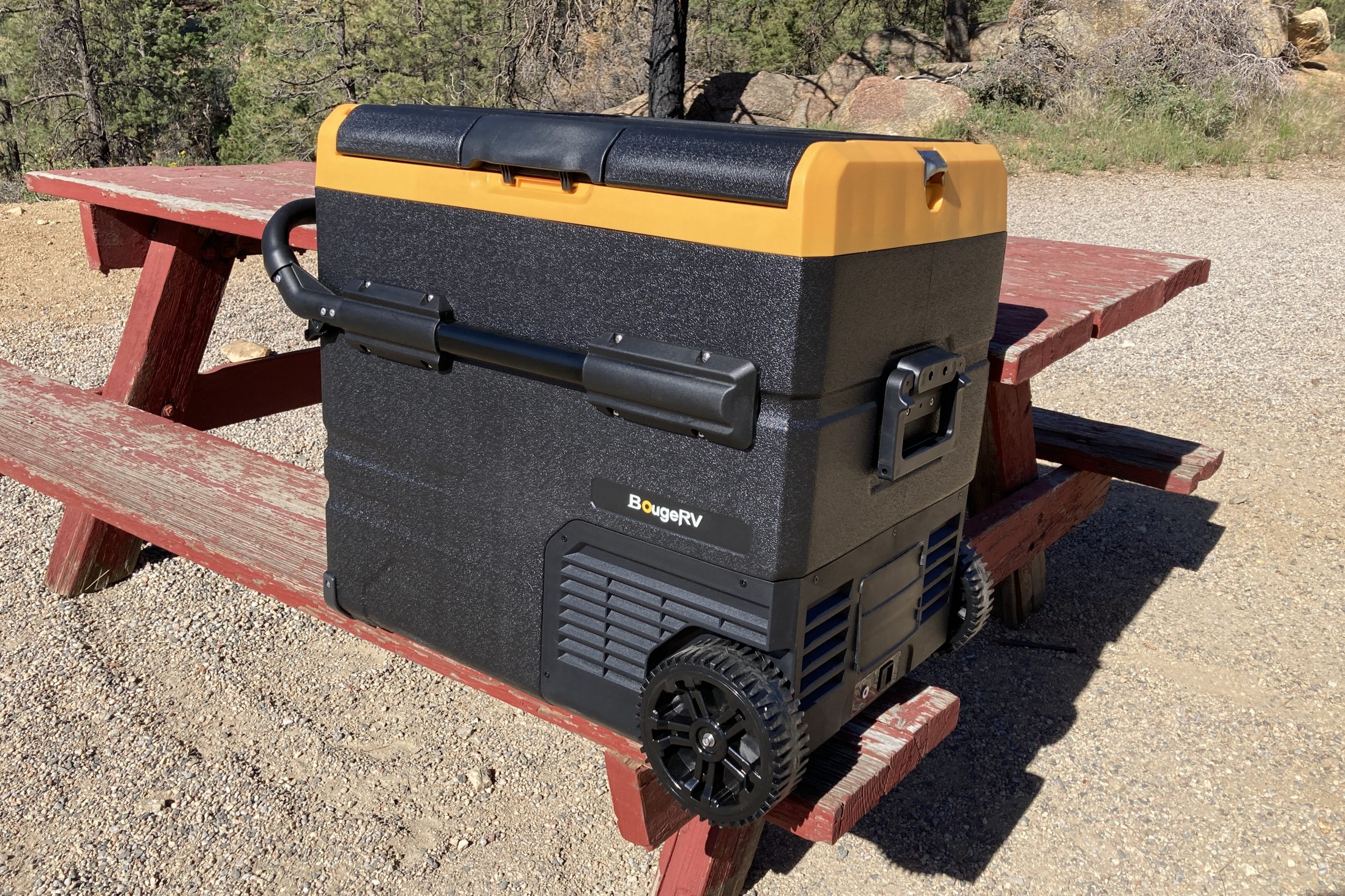