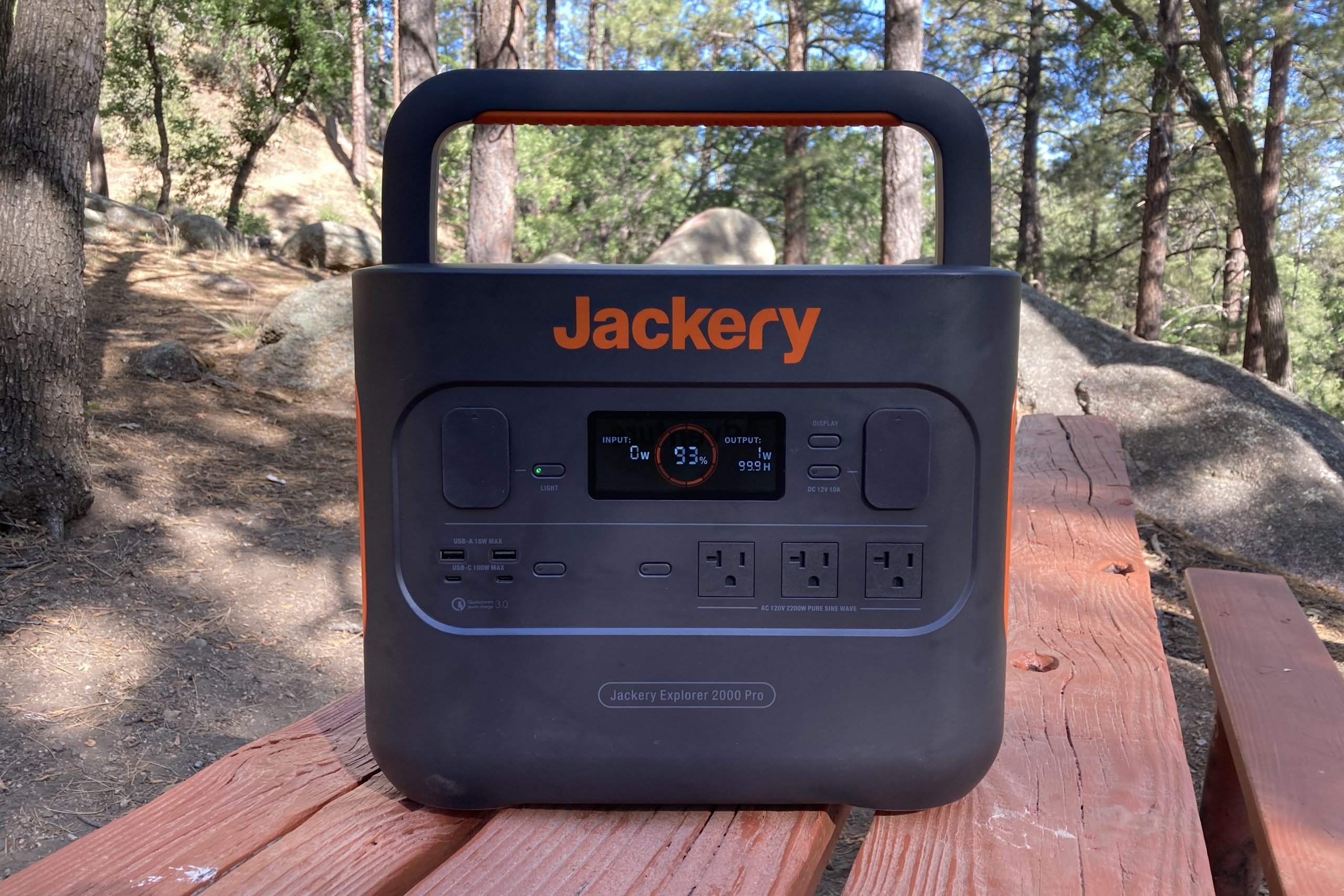 The front panel of the Jackery Explorer 2000 Pro is clearly marked. It comes with an LED light which includes as SOS mode, several AC and DC outlets, and an LED smart display battery monitor with multiple colors. The display shows input and output power (in watts), calculates how long it will take to charge the power station, and how long you can use it before the power runs out. The charging ports for the unit are located on the back and can be charged in one of three ways: solar, 12 volts DC, and 120 volts AC, the latter of which is the fastest way to charge the unit at only 2 hours. The Explorer 2000 Pro even has the capability to both charge and be used simultaneously, though this mode of operation isn’t recommended because it’s hard on the 50 amp hour lithium battery.

The Jackery Explorer 2000 Pro delivers power in a “big” way. Activating the AC and DC outlets is accomplished with the simple push of a button. The Jackery’s three AC outlets are rated for 2,200 watts and 18.3 amps with a 4,400 watt surge, meaning it can run portable induction cooktops, microwaves, portable refrigerators, and air conditioners. It also comes with a slew of DC ports for quick charging, including two USB-A outputs (18 watts max), two USB-C outputs (100 watts max), and a standard 12 volt “cigarette lighter” style with a 10 amp maximum output. The DC outlets can be used to charge smartphones, radios, drones, and laptops, and run CPAP machines, TVs, DC refrigerators, and 12 volt fans. The only thing the Explorer 2000 Pro lacks is a wireless charger for things like cell phones and watches, which is too bad because the top of the unit can easily accommodate one.

The big benefit of the Jackery Explorer 2000 Pro, of course, is portability and the ability to be used practically anywhere. Unlike the standard RV generator that generates noise and deadly carbon monoxide gas, the Explorer 2000 Pro can be used practically anywhere, including the great outdoors, in your car or truck, or at home during a power outage (the Jackery Explorer 2000 Pro has enough juice to to run the GE Energy Star 27.7 cubic foot refrigerator freezer in our home for a full 24 hours). Compare that to the noise and smell of a gasoline-powered generator—to say nothing of the need to maintain the generator and the need to haul a gas can or two—and you can see the benefits of owning a power station like the Explorer 2000 Pro.

Another benefit of the Jackery Explorer 2000 Pro is noise. The Explorer 2000 Pro generates none while in use, though it does produce a little fan noise during charging to keep the unit cool. Generators, on the other hand, are noisy, some more so than others. Even the popular Honda EU2200i generates up to 57 dBa of noise when in use. Not bad for a generator, but you can still hear the chattering 1/4-mile away. Who wants to listen to a generator while boondocking on the North Rim of the Grand Canyon? We sure as heck don’t. But that’s exactly what happened to us a few years ago when a van pulled up next to us at Crazy Jug Point. It was depressing.

The recent advances in lithium ion (LiFePO4) battery technology is what makes a power station like the Jackery Explorer 2000 Pro possible. Lithium ion weighs half as much as an AGM lead-acid battery, can be bulked charged to nearly 100 percent, and has a usable capacity of nearly 100 percent unlike the AGM battery which offers a 50 percent usable capacity. Moreover, lithium ion lasts longer than lead-acid battery—Jackery claims that the Explorer 2000 Pro can be cycled up to 1,000 times to 80 percent capacity. Some have wondered why Jackery opted to go with lithium ion cells rather than lithium iron phosphate cells, which have a longer life. It really comes down to one thing: weight. Lithium Iron Phosphate cells are heavier and bulkier which would make the Explorer 2000 Pro unusable.

The only thing that perplexes us about the Explorer 2000 Pro is Jackery’s choice in solar panel interface. To parallel connect two SolarSaga 100 solar panels to the Explorer 1000, Jackery opted to go with an Anderson plug connector, an excellent choice. However, for the Explorer 1500 and Explorer 2000 Pro, Jackery inextricably decided to go with 8mm female barrel connectors instead for use with the SolarSaga 200. Why the difference? Wouldn’t it be better for Jackery to standardize these connections across its power station and solar panel lineup? We think so. As it stands right now, Jackery’s SolarSaga solar panels come with a Hodge-podge assortment of adapters and connectors to allow them to be used with all of its power stations. This isn’t a show-stopper, but it could be if you happen to misplace or lose an adapter like we did once.

Unfortunately, at $2,299, the Explorer 2000 Pro is very expensive, twice the price as the Honda EU2200i which lists for $1,179. At that price Jackery should toss in a carrying case for extra value. But that’s not the worst of it. Throw in a couple of SolarSaga 200 solar panels and you’re looking at $3,599 for the bundled package, six and you’re looking at a mind-numbing $6,199. More testing needs to be done to see if the SolarSaga 200 is worth the cost, weight, and setup time, but at this point we’re content with using the excellent SolarSaga 100 portable solar panel instead. Check out our review on the SolarSaga 100 if you have any doubts.

As you can see, the Jackery Explorer 2000 Pro delivers power in a “big” way. Aside from the cost, the only real negative with the Explorer 2000 Pro is the size and weight. The unit measures 15x10x12 inches (38.4 x 26.9 x 30.75 cm) and weighs a hefty 43 pounds. With a 2,200 watt inverter and a 50 amp hour battery, the extra size and weight is needed, but that still doesn’t negate the fact that the Explorer 2000 Pro is pretty difficult to move. Two hands will be needed by most except for peeps like Arnold Schwarzenegger. If you haven’t done squats and lifts in a while, now might be time if you’re thinking about buying one. You might be better served by going with a smaller, lighter unit like the Explorer 1500, which weighs 35 pounds, or the Explorer 1000, which weighs only 22 pounds. Going smaller, of course, means less capability, so the pros and cons with each must be carefully “weighed.”

One thing we really like about Host Industries is how it’s always looking for ways to improve its product. These improvements occur not only through customer and dealer feedback, but also through improvements in technology. [read more]

And there we were, August 2021, off on another adventure to the “world’s first national park.” Yep, you guessed it, Yellowstone. With 12 campgrounds and over 2,000 sites, we’d scored on park reservations eight months [read more]