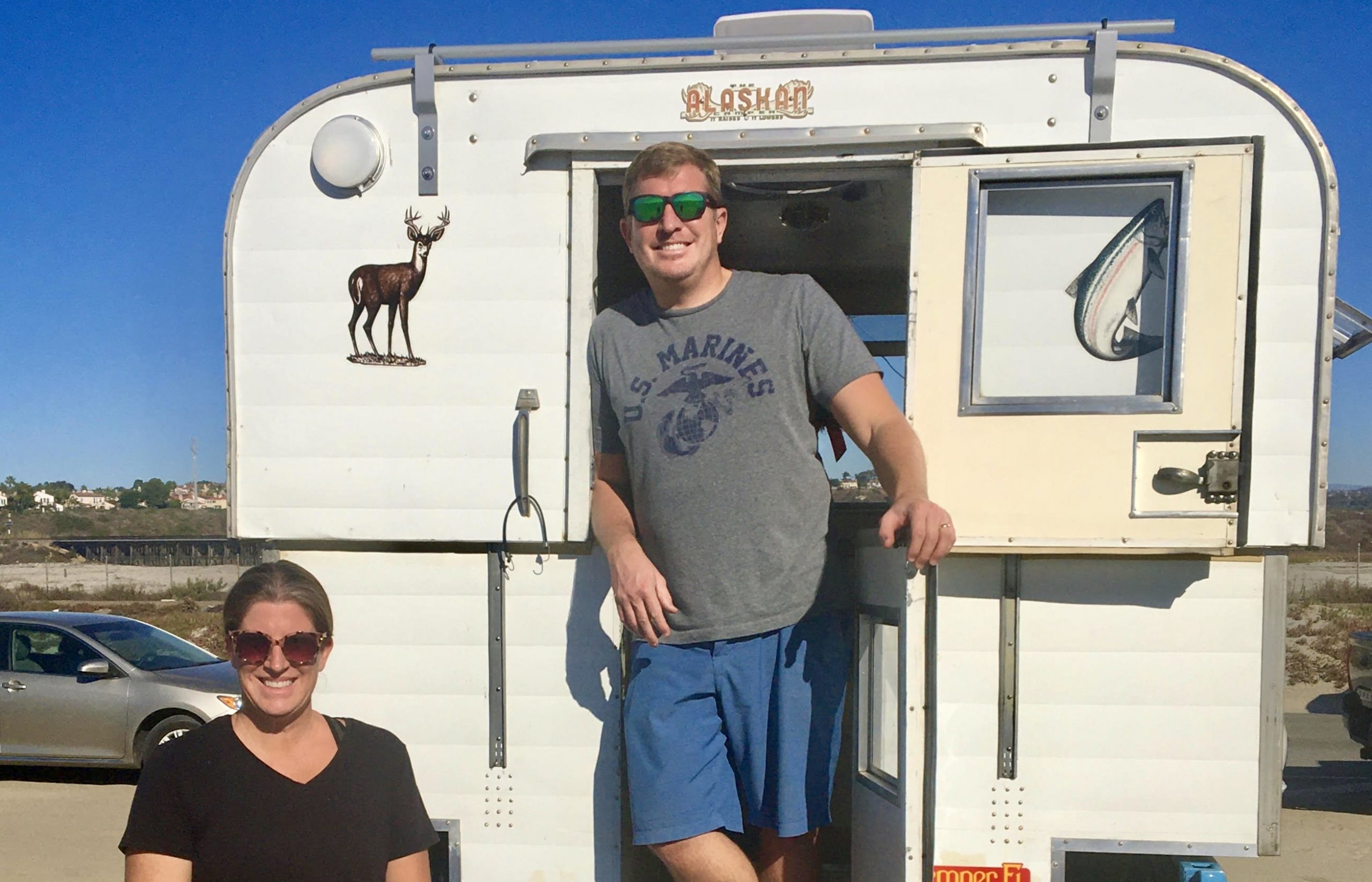 When one hears the words “American classic” one usually conjures-up images of a ’64 Ford Mustang, a Willy’s Jeep, or a ’59 Airstream Overlander. For truck campers two classics immediately come to mind: the Avions of the late 1960s and the Alaskans of the 1950s and 60s. Just one look at an old Alaskan resting in a field and you know they’re worth saving. Not only are Alaskans an iconic piece of camping history—with a retro look and feel—but they’re also one of the few brands that has barely changed since its introduction by Don Hall over 65 years ago.

Combining the best elements of the pop-up with the hard-side, the Alaskan camper is quite unlike any other camper in existence today. Eschewing fabric and canvas for a more rugged and durable design, the cornerstone of Hall’s unique camper is the radiused hard-top that hydraulically raises and lowers with the flip of a switch. Not only does the windowed hard-top offer better insulation for a more satisfying, four-season camping experience, but it also incorporates a full-length door for easier entry—no stooping or bending is required.

Fortunately, you can still buy a new Alaskan camper today. Like the original Alaskan built by Don Hall in 1953, each camper is framed entirely out of wood and wrapped with the same 3-inch aluminum break skin pattern. Today, Alaskan makes both cabover and non-cabover models, but it’s still fun to restore an old Alaskan non-cabover, if you can find one.

Fortunately, Erik Funfar, who lives in southern California with his wife, Denise, and two boys (ages 4 and 7), was able to score on a 1964 Alaskan-8 non-cabover model and have it restored. How was Erik able to find this American classic when finding one is so difficult?

“After looking for almost two years—and missing out on a few I really liked—I posted a want ad on Craigslist,” Erik recalled. “It took about three months until a guy in Joshua Tree reached out. It was a three-hour drive and when I got there, it was in worse shape than was described. At that point I was tired of looking, so I took a chance. It was registered in Washington and lived there for most of its life from what I understand”

Of course, retrieving a 56-year-old camper that’s been sitting in a field for years can have its own set of challenges. Rusty jacks, frame rot, dead batteries, rattlesnakes, and black widow spiders can hinder the process of hauling one of these priceless jewels away. Caution is required, including sometimes, a little sweat.

“It was out in a huge field surrounded by cactus and shrubs. We had to dig a hole to lower the rear of the truck and four guys pushed it into the bed of my truck,” Erik recalled.

Fortunately, the camper as a whole, was pretty complete. When restoring an Alaskan truck camper, it’s important to have original parts. Sconces, fans, Hehr windows, door knobs, cabinet latches, appliances, even countertops are essential items in a true, period restoration.

Of course, restoring a classic from 1964 can take a lot of time an effort. Erik, who works as a business consultant, quickly found out that the job was bigger than he originally thought, so he reached out to the experts at Pop-Top Overland, a truck camper restoration shop located in nearby San Diego.

The biggest challenge in any restoration, but especially Alaskans, is that they hide their damage well. They can look fine on the outside, but be ready for the grave once you peel back a layer or two. Erik’s Alaskan had some pretty serious rot after 56 years, so getting a professional shop like Pop-Top Overland involved turned out to be a wise move.

“The primary reason I reached out to them was to replace the floor, which was completely rotted out,” Erik explained. “There was one whole section missing on the back half of the camper and it was a bigger job than I wanted to take on. Other than that, the exterior was in pretty good shape outside of a few bumps and bruises.”

So what exactly did PopTop Overland do to restore the interior of the old 1,500-pound camper?

“Most of the restoration was done ‘under the skin’ of the Alaskan,” Erik explained. “After Pop-Top Overland assessed the floor issues, I asked them to scope out all the issues they identified with the camper. I was impressed with the floor work, so I commissioned them to keep going with the other major issues. By the time they finished, about 90 percent of what I wanted to do was complete, which was fine for me.”

Numerous cosmetic improvements were made to the camper as well. The work included a new tiled floor, repainted cabinets and bulkheads, new wood veneer on driver and passenger side sections, new custom corner cabinets to house the AC fuse panel and a USB device charging station. Battery charging is accomplished using a portable 120 watt solar panel. Erik stores the camper’s 5-pound propane tank behind the driver side wheel well in the truck and keeps it secure and hidden behind a removable cover.

“As with many projects, once you get going it’s hard to stop,” Erik explained. “It makes sense to do multiple things if you already have the top and bottom separated for example. The wood finish on the inside was really discolored and would have been a lot of work to refinished so we opted to paint instead.”

In all, the restoration took four months.

Of course, you can’t haul a nice-looking camper without a great-looking truck. In fact, the truck’s story might even be more interesting for restoration aficionados.

“My dad bought the truck brand new in April 1972,” Erik recalled. “It’s a 1972 Chevy K20 Cheyenne Super. It has many special order features including factory dual tanks (it’s the only truck I’ve seen with that to this day). The truck was a major part of my childhood obviously—it was my first car and has been with me during the most significant parts of my life (Marine Corps, College, and now raising my kids).”

“My dad has spent over 40 years in the automotive aftermarket industry (President of a company called Hedman Hedders which makes exhaust systems). Their best selling part number of all time was designed for this truck. In 2014 and 2015 we did a major restoration doing our best to keep it cosmetically as original as possible. Mechanically, I added a GM crate HT383 stroker and 4l60E automatic four speed transmission.  The truck was featured outside of the 2015 SEMA show,” he said.

Fortunately, the suspension upgrades needed to haul the camper were minimal. The only thing he needed for the half-ton truck was a set of Hellwig Big Wig airbags. However, getting tires for the truck’s unique 16.5-inch rims was a bit of a challenge. In fact, the wheels are period correct cast aluminum slotted mags that Erik’s dad put on the truck in the mid-70’s. The 16.5-inch rim has been discontinued by most tire manufactures. Fortunately, Erik was lucky enough to source a good-looking set of all-terrain tires made by Interco Tires.

Now that most of the restoration work is done on the camper, does Erik have any other plans?

“I’m working on an outdoor shower and modern refrigerator since I can’t seem to get the original working,” he said. “The tile floors we put in six months ago are starting to come up from the heat and movement—I would recommend a sold sheet of vinyl flooring. Armstrong makes some cool, vintage patterns that would work well.”

So how does the family like the restored Alaskan camper? Is it large enough for an active, family of four?

“We Love it. I’ve wanted one for a long time and it does exactly what I want. The main way we use the camper is for dinner and day trips to the beach and for short overnight trips in the mountains. Me and my boys just finished a three-night trip in Big Bear. Given the size, I think four to five days is probably max for this crew (for now). A cabover would be nice for sleeping, but it did not look ‘right’ for my truck. I wanted to balance function with the right look,” he said.

Already own a three-quarter-ton pickup truck and can’t afford to buy a one-ton truck to haul a truck camper? Then you’ll want to take a look at this article by reader Michael King. Michael lays [read more]

Truck Camper Adventure had the pleasure of getting a tour recently of the Host Campers factory in Bend, Oregon. The tour was provided courtesy of Randall Pozzi, Host Industries General Manager, who showed us everything. [read more]

One of the great things about social media is the exposure to a wide variety of truck camper rigs that have either been built or are in the process of being built. One that we [read more]