We’ve all heard the horror stories—RV awnings being damaged by heavy winds requiring hundreds of dollars to fix. This happened to Josh Fuss and Amy Rupp recently while boondocking in Idaho. On what had been a windless day, a strong gust of wind tore one corner of their awning and nearly ripped the entire thing from their camper. This scenario happens all the time and can happen to any RV owner, regardless of experience. Most of us love the idea of having an awning, but few of us really realize the cons associated with having one. If you’re thinking about buying an aftermarket awning or having one installed at factory, think again. Because as we’ll point out in this article, the cons of owning an awning far outweigh the pros, especially for those who roll in a hard-side truck camper.

Truth be told, the awning can be a wonderful accessory in the right conditions. It provides plentiful amounts of shade where no trees exist, offers an effective barrier against rain, and can provide an extra layer of privacy. It’s also a great way to expand the “living space” of your camper. All of us have enjoyed the shade that awnings provide whether it’s at home or mounted on the side of a friend’s recreational vehicle, but don’t let that fool you or lull you into a false sense of security. If you like to boondock—and most truck camper owners do—you’ll be exposing your rig, and by extension your awning, to fierce and sudden winds. If you’re lucky, you’ll avoid damage to your awning and your camper, but this will only lead to further use and flirtations with disaster. Just ask Josh and Amy. They’ll tell you. They keep using their awning and it keeps getting damaged.

So what makes the truck camper unsuitable for awning use? Two things—the truck camper’s size and height. The truck camper’s diminutive size limits an awning’s length to about 8 and 12 feet compared to the typical fifth wheel/motorhome awning which is typically between 16 and 25 feet long. Not only that, the truck camper awning is located much higher from off the ground as a result of the camper being mounted on a truck. This results in an additional height between 2 to 4 feet depending on the truck and the camper’s design (the floor on some campers, like those made by Host, is actually located above the bed rails of the truck). This additional height not only reduces the amount of shade that the awning can provide, but it also makes it prone to catching heavy winds that can rip and/or carry it away. Mariners who own sailboats can appreciate the force of such winds. The additional height of a truck camper awning also makes it more difficult to deploy and put away.

Of course, the issue with height isn’t a problem with the pop-up camper. The lower profile of a pop-up makes it much more suitable for awning use, which is why so many pop-up owners opt for one. Being lower, it provides a lot more shade and is much easier to use. Awning options for pop-up campers are more plentiful too, with one of the most popular being the new 270 degree “batwing” awning like BundutecUSA’s BunduAwn. The batwing-style of awning provides shade on both the side and rear of the camper when it is deployed.

“Awnings can be more trouble than they’re worth, explained Kevin MacAfee. “The awning pictured (above) got damaged by a rogue gust of wind on an otherwise perfectly calm day in Big Bend, bending one of the support arms. It’s much easier to move the camper to provide any necessary shade than it is having an awning, IMHO.”

Yet, pop-up truck camper owners are also more adventurous and buy pop-ups for a reason—to take off-road. A stored awning can protrude up to 8 inches from the side of the camper, creating an outrigger that can snag on tree limbs and rock outcroppings causing damage. This is one reason why more adventurous truck camper owners remove their lift jacks and roll without any awnings. Fewer outriggers means fewer chances for damage.

But the number one negative associated with the RV awning is the one we mentioned at the beginning—wind damage. Yes, it’s possible to avoid damaging winds by keeping a watchful eye on those ever-shifting isobars, but this isn’t always possible. As mentioned, powerful gusts can come out of nowhere, wreaking all kinds of havoc on your rig. But the damage caused by high winds isn’t limited to just the awning. Loose awnings have been known to crack skylights and vents on the roof as well as cause damage to windows and sidings while the awnings are being tossed about. Good anchoring is important, of course, but only works to a certain point. And of course, we’ve all heard the horror stories of awnings coming loose on the road. If you thought the damage from a loose awning was bad when stationary, it’s even worse when you’re traveling 65 mph on the highway.

So is there an option? Yes—the portable canopy. This is what we use and it works great. There are several excellent canopies that can be purchased for a reasonable price online. We’ve found that a canopy with a screen enclosure provides all of the shade and protection we need on warm summer days when sitting in the camper is the last thing you want to do. And different styles of canopies can be purchased like a Caravan Evoshade featured in a recent article here on Truck Camper Adventure. The canopy is also portable, fairly easy to deploy, and doesn’t require mounting and drilling holes into the side of your camper. Yes, you still have to contend with the wind, but that’s something we’re willing to put up with when there are no trees around. Good anchoring is key.

As you can see, the cons of having an awning on a hard-side truck camper far outweigh the pros. The limited length, the excessive height, the outrigger effect, and the inability to be used with any appreciable amount of wind greatly limits its ability to be useful. These cons need to be carefully weighed against the pros because RV awnings aren’t cheap. A manual Carefree of Colorado awning can cost you $800 installed; a better Zip Dee awning much higher than that. Still, some truck camper owners will want one and that’s okay. It’s best to go into the decision with your eyes wide open rather than closed. When building a camper, choosing options can be fun, but they can also be expensive if you make the wrong decision since the truck camper itself provides loads of shade during the course of a day and doesn’t cost a thing. The choice is yours.

What has been your experience with awnings on truck campers? We’d love to hear from you. 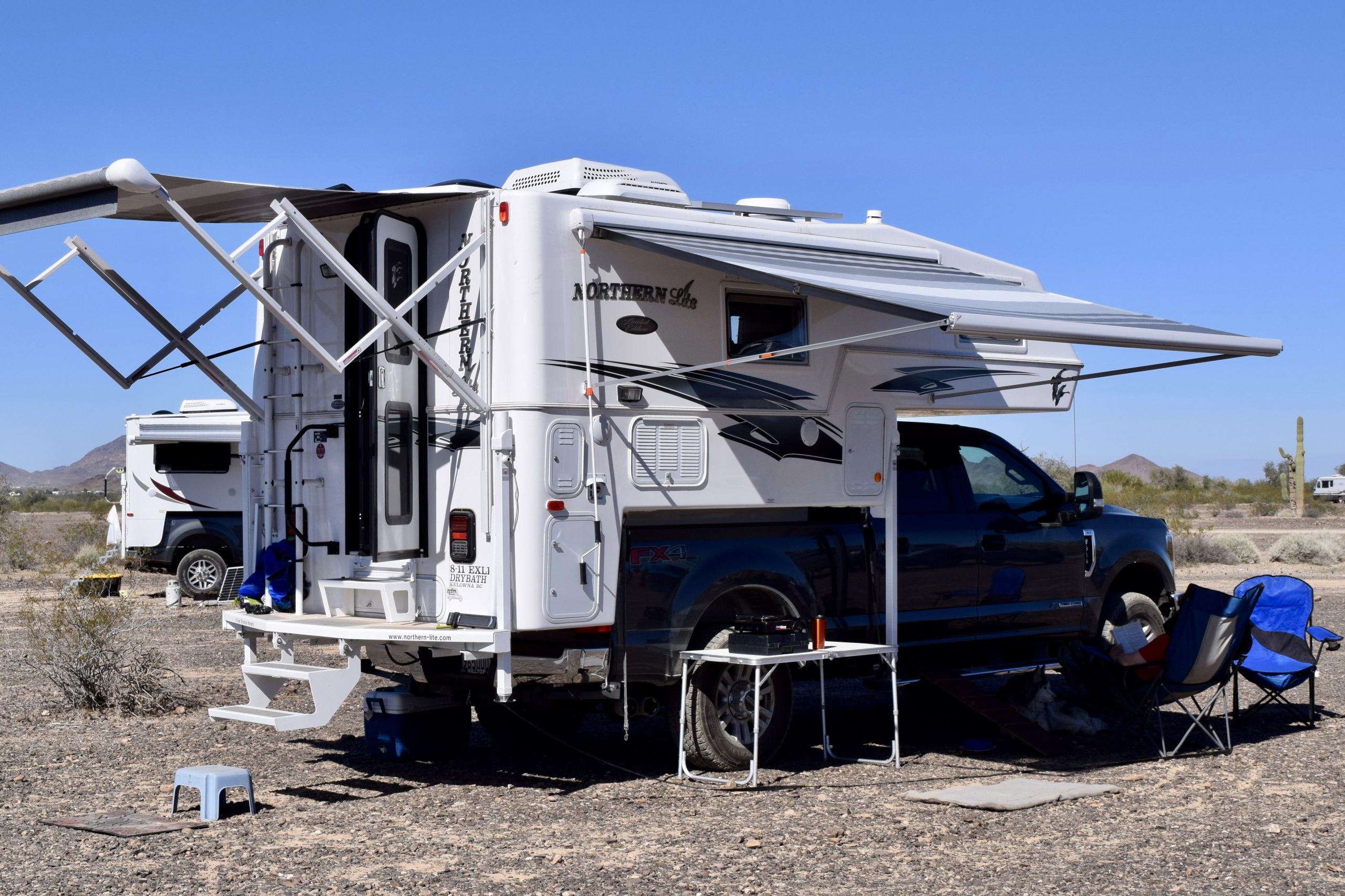 Everybody loves a hot shower. Even more so after a hike in the mountains or after 10 hours of driving in the hot desert. During a recent trip my wife, Julie, said that it would [read more]

We spent last weekend at Apache Lake, dry camping at the Burnt Corral USFS campground. As you probably already know, I’m not a big fan of campgrounds, in fact I hate them. I’d much rather [read more]

Warranty Repairs and a Revisit to the Northstar Factory

First, you might be wondering why we’d go back to the Northstar factory after just visiting there last September. Well, we began our two month-long summer adventure with no intention of traveling to Iowa, but [read more]