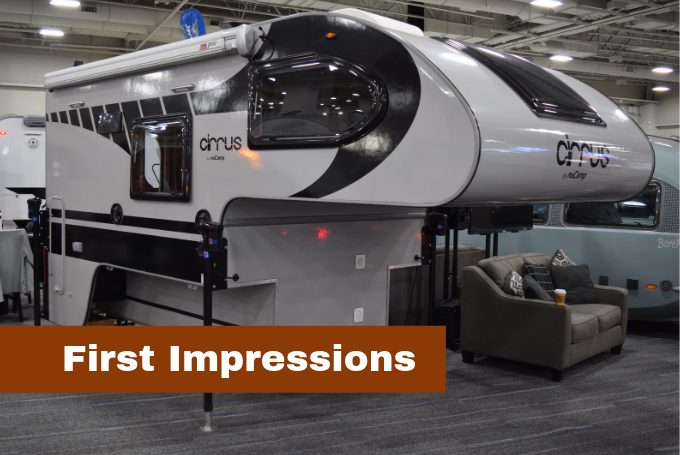 Well, it’s done. After months of extensive development, NuCamp finally unveiled the Cirrus 720 at the 2019 RVX Show in Salt Lake City last month. Launched with today’s 3/4-ton truck in mind, the Cirrus 720 is NuCamp’s third and smallest truck camper at 1,875 pounds. If you’ve been following this saga, you know that the camper didn’t start out that way. NuCamp designers originally wanted a camper for the lucrative half-ton market—the Cirrus 670 as it was originally called—but were unable to achieve the 1,600 pound dry weight target and had to settle for the less-lucrative 3/4-ton market instead.

It’s disappointing that NuCamp wasn’t able to achieve its stringent weight goal, but the Cirrus 720 still has a lot going for it. The camper is 14-feet 9-inches long, 7 feet 1-inch wide, and offers an interior height of 6 feet 4 inches. The 8-foot 3-inch floorplan features a comfortable, split dinette in front with a Lagun swing away table, a wet-bath and a Norcold 3.7 cubic foot refrigerator on the driver side, and a kitchen and a large wardrobe on the passenger side. The camper features holding tank sizes of 20 gallons fresh, 22 gallons grey, and 5 gallons black, and comes with a single 20-pound propane tank, and a standard battery compartment large enough for a single Group-27 battery.

The Cirrus 720 offers several mainstays that you would expect to find in a Cirrus truck camper. These include the Alde hydronic heating system, which doubles as both a water heater and a furnace, insulated “Euro” windows, a spacious cabover with a north-south queen-size bed, laminated and bonded Azdel sidewalls, and the Froli sleep system. The general shape of the camper is very reminiscent of the larger and well received Cirrus 820 model, though you won’t find anything like the 820’s rear bumper on this model. The weight was too prohibitive.

As you’d expect for a camper of this size, the Cirrus 720 doesn’t have a very large basement. In fact, its only 5 inches deep. Yet, in spite of its “small” size, the heated basement is still large enough to house the camper’s two holding tanks. This maximizes storage in the main cabin and keeps the center of gravity in the camper low, two important considerations in any truck camper design. 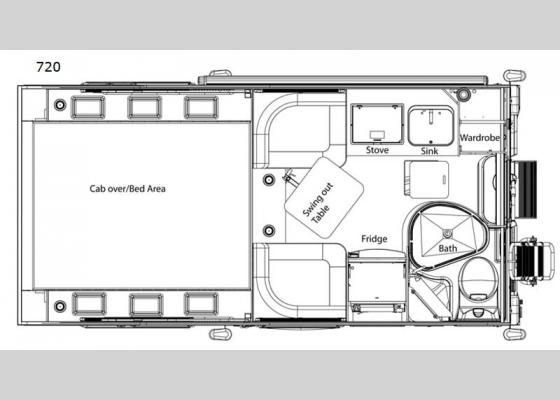 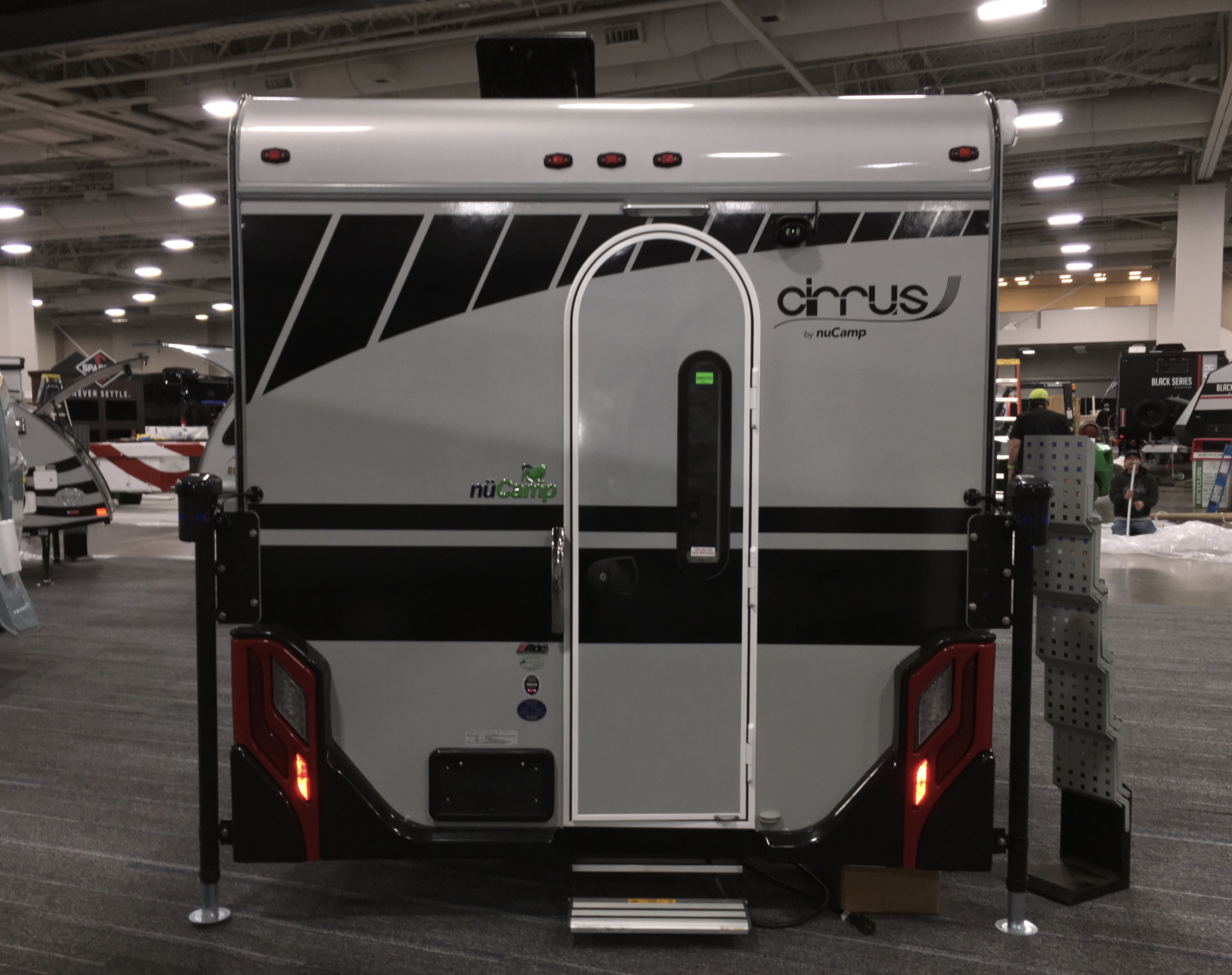 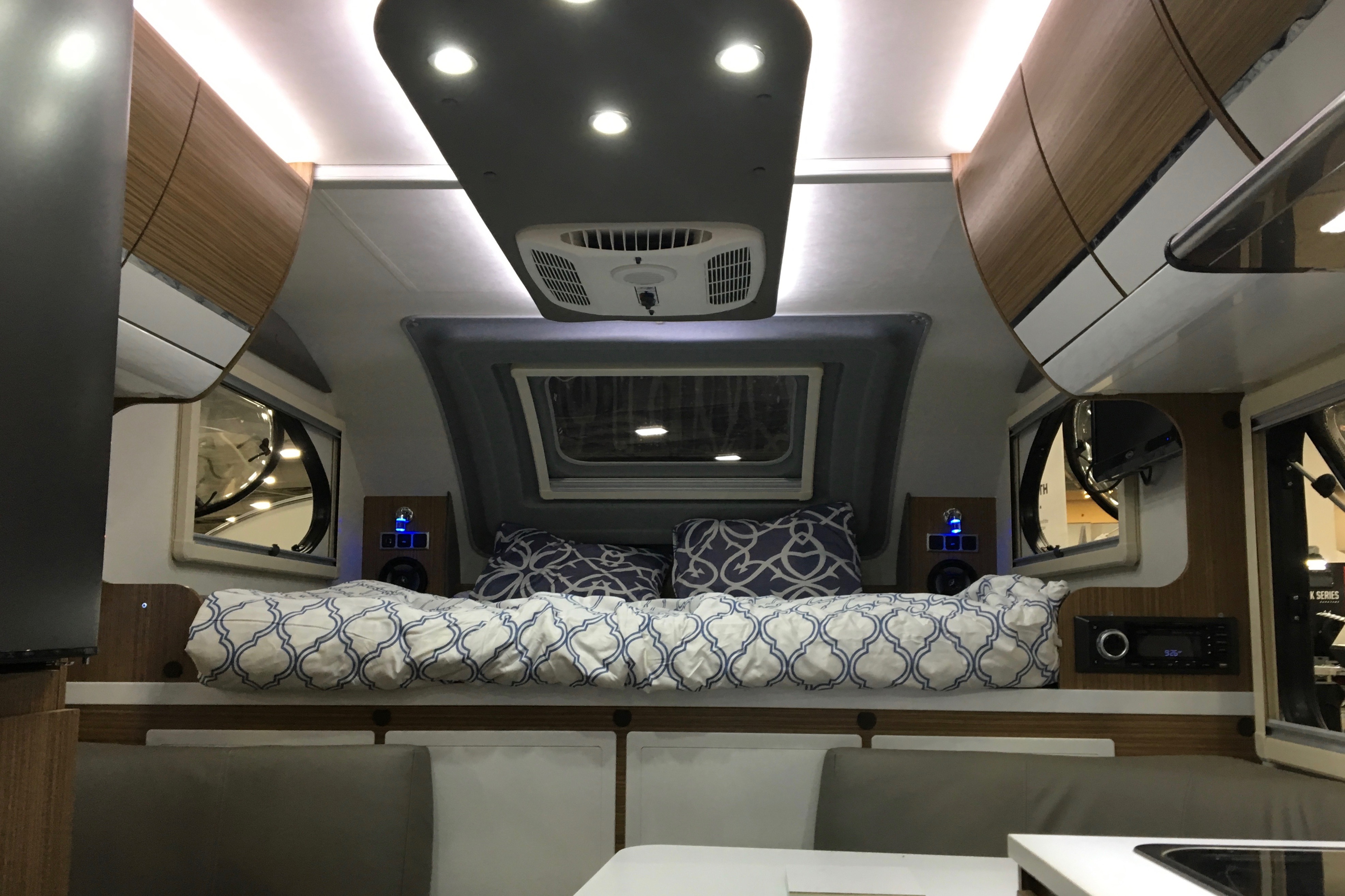 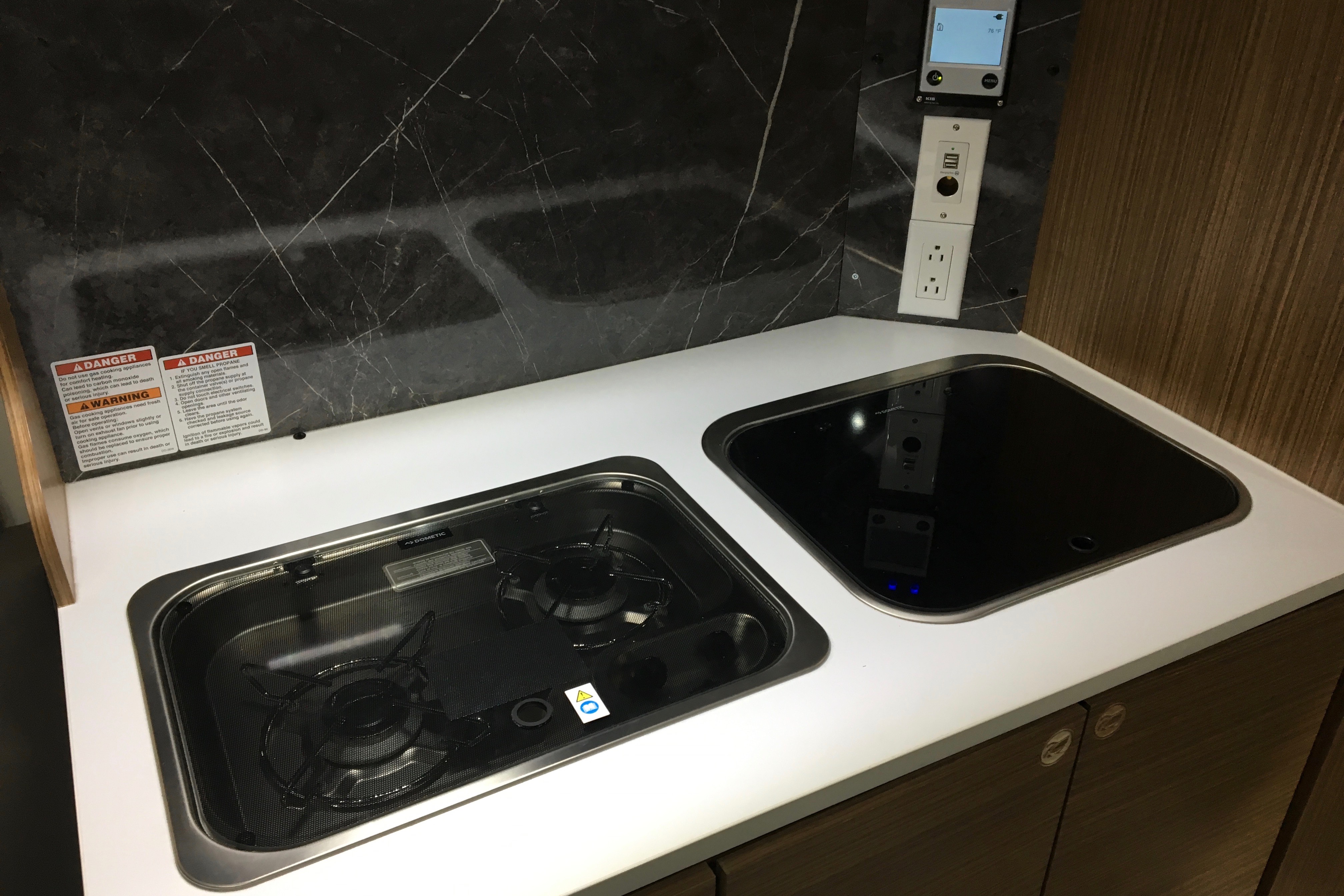 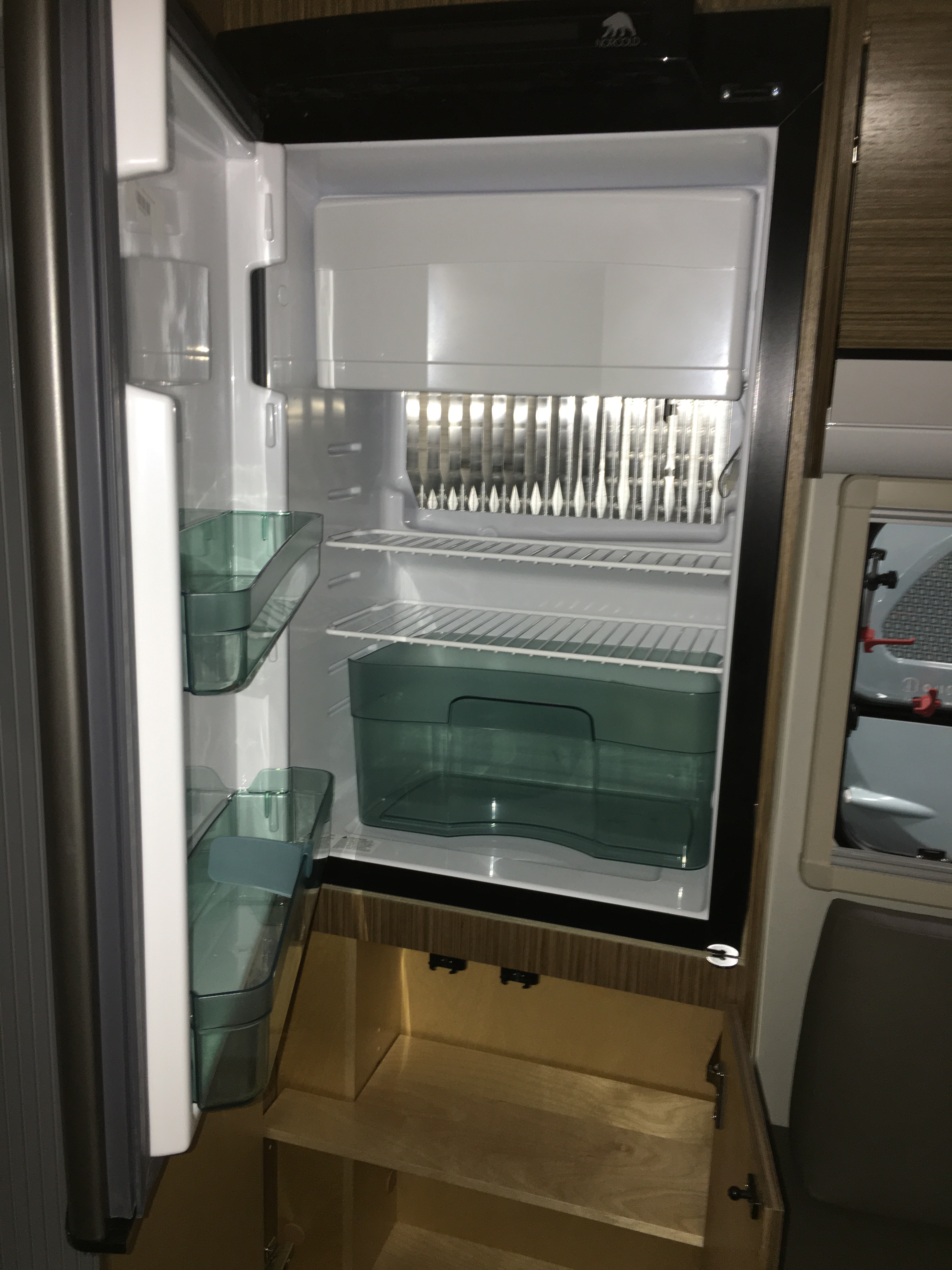 What does Truck Camper Adventure think about the Cirrus 720 now after seeing the camper in person? Overall, we really like it. It’s a good-looking camper both inside and out, exactly what you would expect from NuCamp. One thing we noticed is how open the interior feels. The Cirrus 720 doesn’t feel like a small camper at all. We were particularly impressed with the amount of storage found in the camper. We’re also big fans of the dinette, the split approach works well in this camper. The 720’s seat cushions are actually very comfortable to sit on, unlike the stiff cushions found in most truck camper dinettes. We also like the cup holders found in the cabover step and really like the Lugun swing away table, which creates room in the cabover when needed.

Like we said in an earlier article, we were hoping to see a 30 gallon fresh water holding tank in the Cirrus 720, but with the camper’s small basement, this increase might not be possible. Perhaps reducing the size of the grey water holding tank will free up enough space for a larger fresh water holding tank? We suppose the demand would have to be high for any kind of change to be made. We’d also like to see an option for a dual battery box for extended boondocking. Unfortunately, this isn’t a listed option, but with the popularity of solar power and boondocking, this is a change that NuCamp designers should take a hard look at incorporating. A single battery isn’t going to cut it, unless, of course, the owner decides to go with a lithium battery. 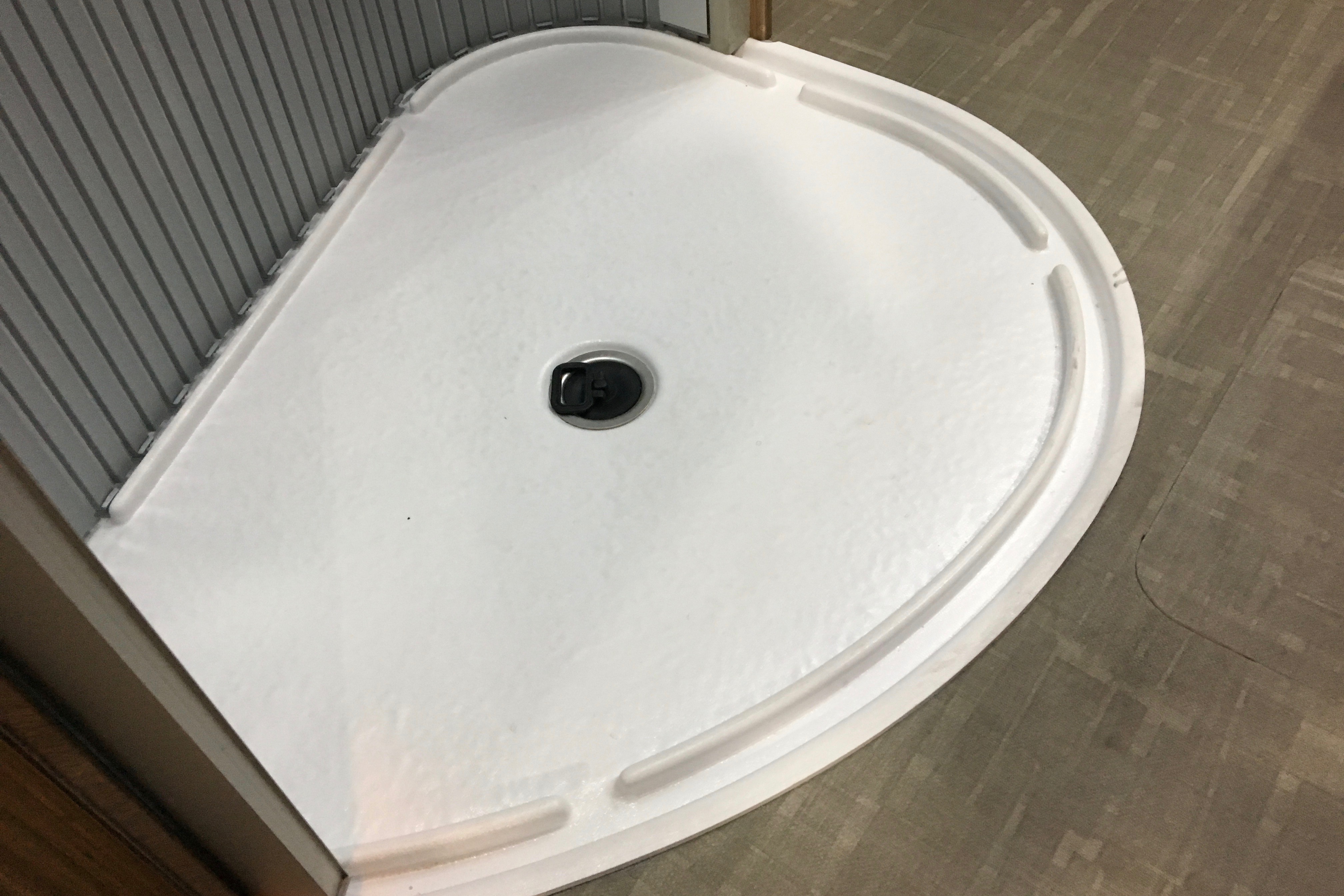 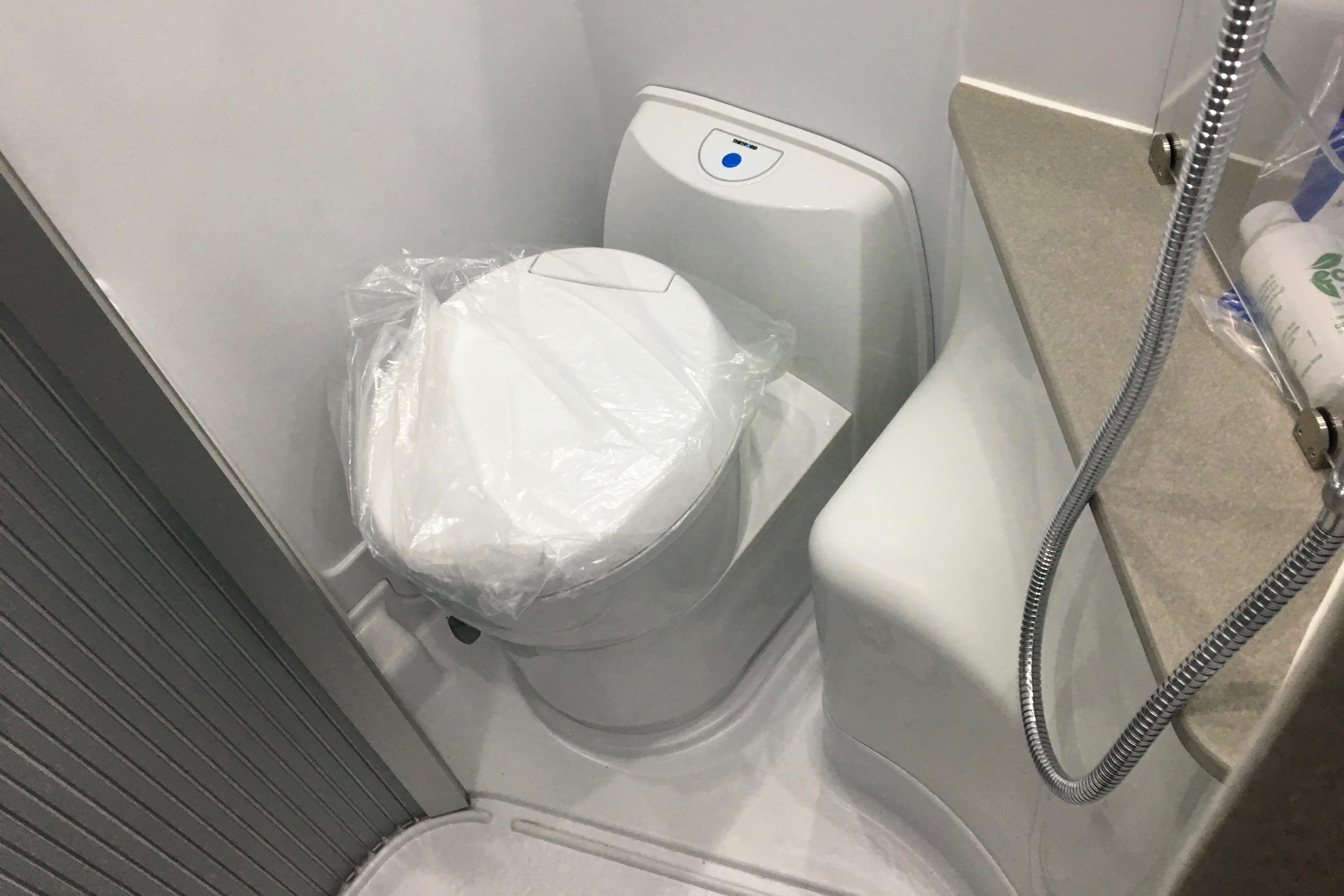 We’re still not sure what to think of the Cirrus 720 wet-bath. While we love the “outside of the box” creativity and innovation found in the wet-bath, the low profile shower pan that encroaches upon the walkway might be an issue. Will the shower pan be a dirt collector? Will it weaken and break over time with repeated foot traffic? We’re not sure. Both are important questions. For sure, the wet-bath is plenty big, and the cassette toilet is a great feature with a number of benefits, but the white shower pan sticks out like a sore thumb in the hallway. I would’ve chosen a more muted color that blends in more with the flooring instead, rather than a contrasting one. Still, the Cirrus 720 bathroom shows true innovation rarely seen in today’s truck camper, something that NuCamp seems to serve up on a regular basis.

In conclusion, we really like the Cirrus 720. It’s an attractive camper that fills a big void in the 3/4-ton truck market. We’re glad to NuCamp decided to market the camper “as is” rather than delaying the release for a lofty, unachievable goal. Sure, it’s too heavy for a Ram Power Wagon, but should work on most 3/4-ton short-bed trucks and even a few more capable Ford F-150s. There’s no doubt about it, the camper’s got the goods to be successful and should please those who are looking for a light, low profile hard-side to take off-road or for those who are simply looking for an occasional weekend getaway.

Does NuCamp still have plans for a half-ton camper? According to Scott Hubble, NuCamp’s CEO, they do. But it probably won’t be ready for release until early next year. Scott told me that this time the target weight for the Cirrus 620, as its now being called, will be 1,500 pounds. Shaving off another 400 pounds will be difficult, but one that NuCamp’s determined designers should be able to achieve. Sure, some functionality and size will probably be lost, but having another half-ton capable truck camper, like the Lance 650, will be worth having in today’s market.

Yep, we did it. We finally swapped out our old Lifeline GC AGMs for a pair of Expion360 VPR PowerMod 120 amp hour lithium (LiFePO4) batteries. Why go through the trouble and expense? Because the [read more]

Exploring Utah and Living the Dream Via Truck Camper

Truck Camper Adventure is proud to present this interview with Matt Kasner. Matt grew up in the Midwest and is an avid outdoorsman who enjoys rock climbing, mountain biking, skiing, and, of course, truck camping. [read more]