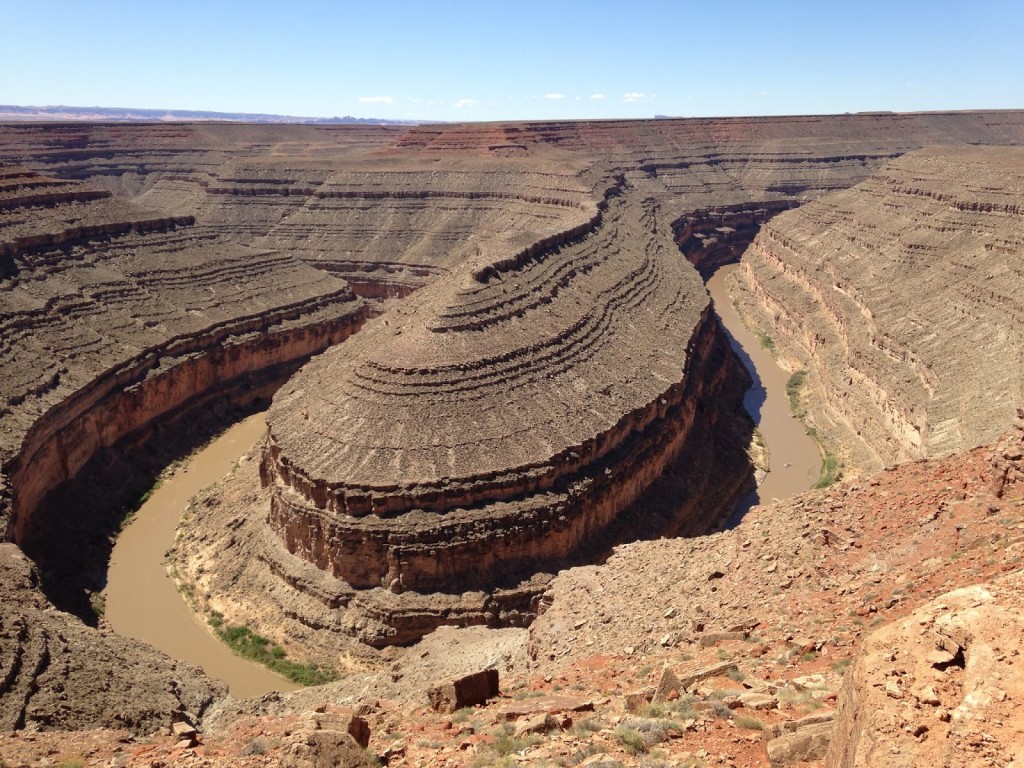 The great state of Utah is home to a large number of geologic wonders and breathtaking drives. The southeastern part of the state is where you can find several of these attractions. Among the best has to be Goosenecks State Park located 25 minutes north from Monument Valley.

Goosenecks State Park offers a spectacular vista 1,000 feet above the winding San Juan River. Known as an entrenched river meander, geologists say the erosion which created this distinctive feature has revealed a rock record exposing some 300 million years of time. The depth of this meander was created long ago when a period of uplift occurred. As the land in this area rose, the river’s flow rate increased and cut deep into the land, creating the impressive meander that we see at the park today. The total length of this meander is a little over six miles, though only about half can be viewed from the park. Make sure you bring your camera. The views here at Goosenecks State Park are pretty amazing. Indeed, there’s nothing else quite like it on earth.

Finding Goosenecks State Park is pretty easy. From Monument Valley drive 25 miles north on the US-163 to Utah-261 west. The famous rock formation called Mexican Hat Rock is just a few miles south of Utah-261 and is an excellent landmark to let you know you’re getting close. Goosenecks State Park can be reached by taking Utah-261 west for a few miles then take Utah-316 south about four miles to reach the park.

The facilities at Goosenecks State Park are pretty minimal. The park offers picnic areas, vault toilets, and an observation shelter. There are no developed hiking trails in the park, but the Honaker Trail, a few miles to the northwest, provides access to the San Juan River. For a fee of $10 a night, a primitive camping area is available in the park, but consists of nothing more than a large graded clearing where you can park your RV. There are no real camping sites, so sites cannot be reserved. The camping area offers fire pits and vault toilets, but that’s about it. This is real boondocking–no water, no electricity, and no dump station–but the views and location here make a stay for a night or two well worth it.

Goosenecks State Park is a truly under-appreciated gem. Both times we visited we saw, perhaps, eight or nine cars and we were the only RV there on both occasions. Due to the primitive nature of the park, most visitors don’t stay long, perhaps an hour to see the sights, take some pictures then leave. Some caution is required at the park. Precipitous drop-offs to the river below border the park, so keep a close eye on children and watch your footing. For those bringing a camera, make sure you bring a wide angle lens to capture the majesty and beauty of the views. As I stated earlier, the views are pretty spectacular. After your visit, I highly recommend a tour of nearby Valley of the Gods and the Moki Dugway.

One of my fondest memories of growing up in Tucson, Arizona was a field-trip I took in the second grade to the Arizona-Sonora Desert Museum. What? A museum as one of your favorite childhood memories, [read more]