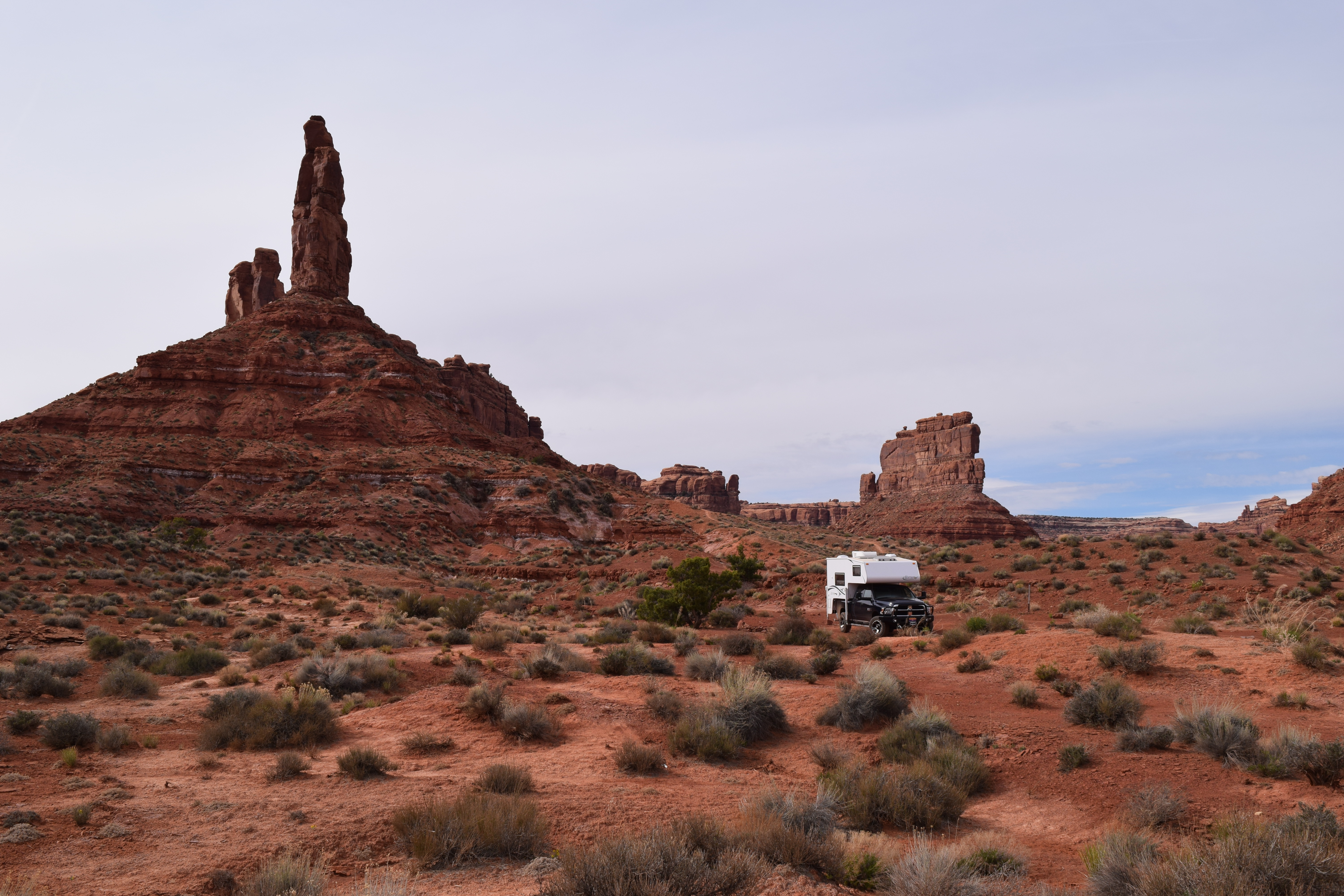 Mysterious and hauntingly beautiful, Utah’s Valley of the Gods is a must-see gem in the American Southwest. Located on property managed by the Bureau of Land Management (BLM), the Valley of the Gods will captivate you with its red rock landscapes and unspoiled natural beauty. Often called a “mini-Monument Valley,” the comparison isn’t entirely accurate. Entrance to the property is free and you won’t find bus loads of tourists here either. Being a BLM location also means that you can camp onsite in your tent or RV. You can’t do this legally within the borders of the Monument Valley Tribal Park.

A quick note about the location. The entrances to the Valley of the Gods are poorly marked. The two entrances (one east on the US-163, the other west on Utah-261) are identified with only a small sign and tiny informational kiosk, so be on a sharp lookout or you’ll drive right past them like we did when we were looking for the east entrance the first time we visited in 2010. Coordinates to the east entrance are 37-14-11 N, 109-48-49 W. One landmark that will help you find the Valley of the Gods is Mexican Hat Rock. If approaching from the south on the US-163 this unique shaped rock will let you know that you’re just a few miles from the valley. 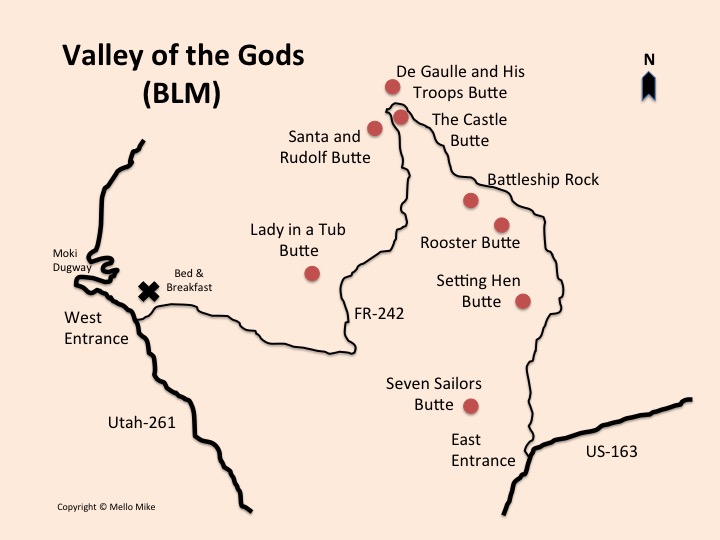 The Valley of the Gods is toured by driving FR-242, an unpaved 17-mile-long road that cuts and winds its way through the valley (see above map). The rough and sometimes rocky road is suitable for most trucks and SUVs, and even some cars, with a decent ground clearance. These vehicles can navigate the route with ease except for those periods during and immediately after heavy rains; a 4×4 vehicle is best used during these periods. Without any lengthy stops, it took us about two hours to complete the drive. The elevation of the route varies between 4,500 and 5,100 feet.

Like Monument Valley, the prime attractions of the Valley of the Gods are the numerous red sandstone buttes, mesas, and pinnacles found along the drive. The rock formations in the Valley of the Gods aren’t as massive as the ones at Monument Valley, but they are more shapely and interesting with each possessing a unique character and charm of its own. As you drive around the valley you’ll want to have your camera ready to snap pictures of the more popular and recognizable formations like De Gaulle and his Troops (to me it looks like a giant foot sticking out of the ground when we approached it from the east), Sitting Hen Butte, Seven Sailors, Rooster Butte, Santa Claus and Rudolph, Lady in a Tub Butte (aka Balanced Rock), Battleship Rock, and Castle Butte.

Not surprising, the mysterious formations found in the Valley of the Gods are sacred to the Navajo people. The Navajo not only believe that the spirits of their ancestors reside in these sandstone monoliths, but they also believe that they posses the power and strength to aid young warriors going into battle. When you come to the valley it’s easy to see why. Like armed sentinels keeping watch over the sun and wind-swept valley, the rust-colored formations appear as if they’re waiting to be summoned by those who are in need. 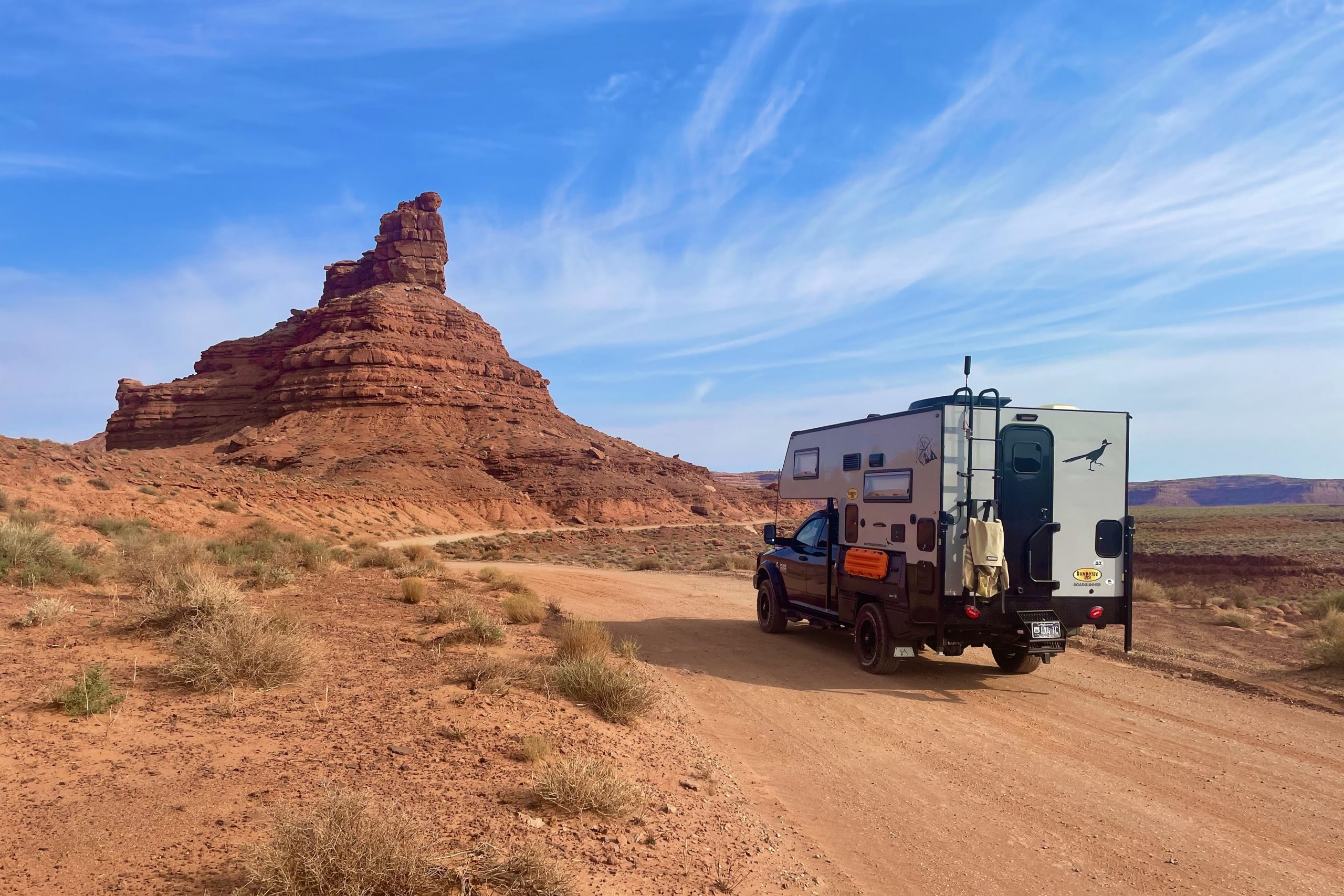 For those with a small RV or tent, the Valley of the Gods offers plenty of places to pull-over and boondock for the night. The sometimes steep and rocky road, however, isn’t conducive to towing a travel trailer or fifth wheel and is best navigated by smaller RVs like truck campers, class B vans, and class C motor homes no greater than 24 feet long. If you own a large RV or tow-able, I recommend boondocking nearby at either Goosenecks State Park or Muley Point atop the Moki Dugway, then driving the Valley of the Gods in your “toad” or tow vehicle (note that the Moki Dugway has a 10,000 pound GVWR limit). If boondocking isn’t your style, full RV hookups can be found at RV parks in nearby Mexican Hat, Bluff, and at Goulding’s near Monument Valley.

The tranquil valley offers excellent opportunities for photography, especially at sunset or sunrise, and hiking, even though there are no official trails. You can hike and climb anywhere in the valley, but the best areas for cross-country hiking are located north of the road around the butte called De Gaulle and his Troops where several small canyons encroach upon the valley. Of course, you can pull over and stretch your legs anywhere along the route.

For those without an RV or a tent, there is a Bed and Breakfast located near the west entrance of Utah-261. This portion of the road, where the Bed and Breakfast is located, is smooth and level and can be reached by any kind of vehicle. The Bed and Breakfast only features four rooms, but I’m told that the accommodations are nice and rustic and offer spectacular views of the valley. 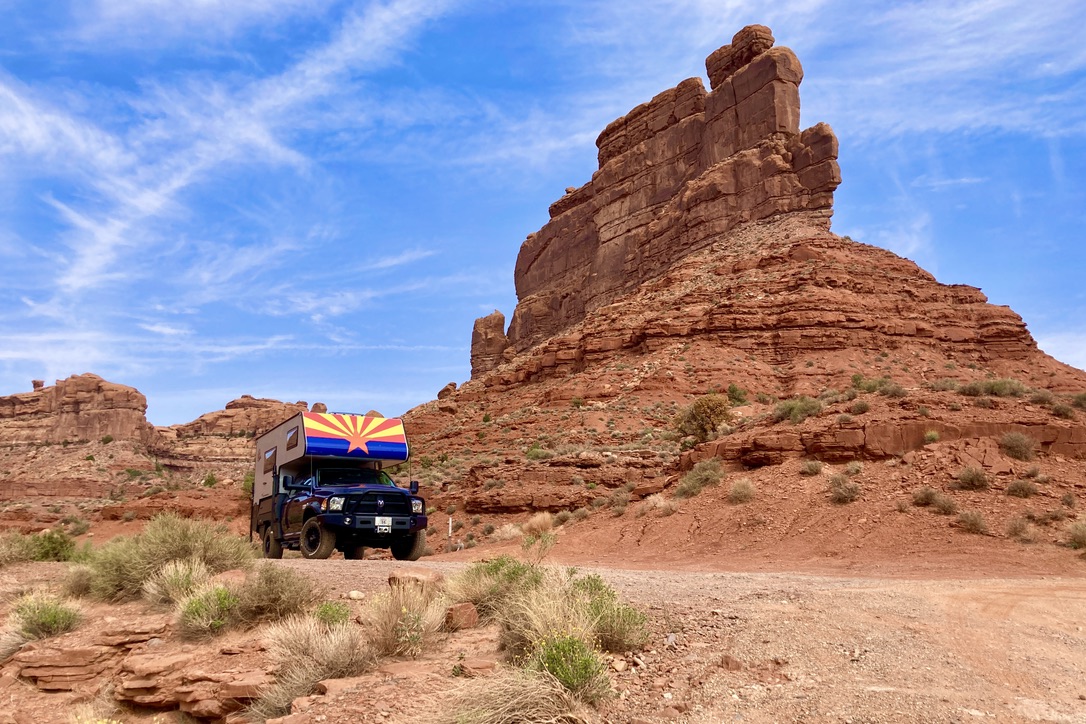 The Valley of the Gods isn’t as well-known or as popular as Monument Valley, but that’s a good thing. The natural, unique beauty, solitude, and tranquility here can’t be beat. My wife actually enjoyed the Valley of Gods even more because of the solitude. I did too. If you’re on your way to Canyonlands or Arches National Park, and you have a few extra hours or an extra day, you’ll want to take this scenic and unforgettable drive and boondock for the night. You won’t regret it. 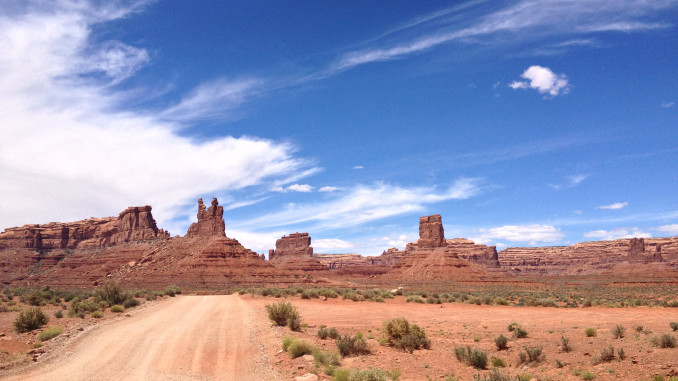 Southeastern Utah’s Valley of the Gods is a great place to boondock. It’s one of my all-time favorite places to relax with the truck camper and take photographs. It’s very accessible for small RVs, like [read more]