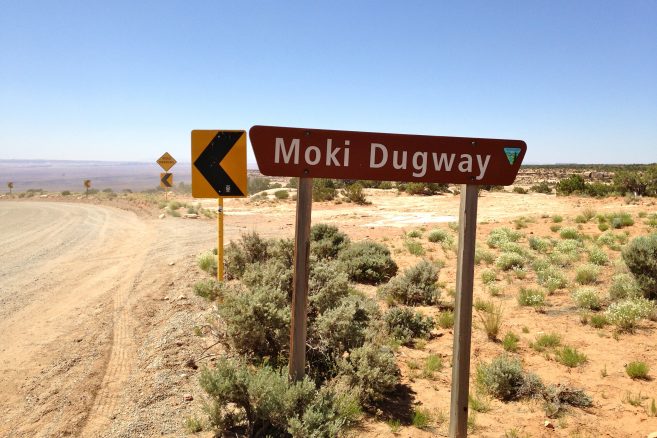 If you’re a daredevil who enjoys thrilling, hair-raising drives then you’ll love tackling the Moki Dugway in southern Utah. Located on Utah-261, the dugway twists and turns 3 miles and drops 1,100 feet from the top of Cedar Mesa to the highway below. The top of the Moki Dugway provides breathtaking views of some of Utah’s most stunning natural wonders, including Goosenecks State Park, the Valley of the Gods, and world-renowned Monument Valley, which lies some 25 miles to the south. Moki is derived from the Spanish word, Moqui, a general term used by explorers in this region to describe Pueblo Indians they encountered as well as the vanished Anasazi culture. Dugway is a term used to describe a roadway carved from a hillside.

The Moki Dugway has an interesting history. The Dugway was constructed in 1958 by Texas Zinc Minerals as a route for ore trucks to haul uranium and vanadium from Cedar Mesa to a processing plant near Mexican Hat, Utah. Today, the unpaved route is enjoyed by thousands of tourists each month. Due to the narrow road, the 10 percent grade, and the sharp switchbacks, vehicles longer than 28 feet and those weighing more than 10,000 pounds are not recommended. This includes large motorhomes, buses, and trailers. However, small RV’s like truck campers and shorter class B and class C motorhomes can tackle this drive with ease. That isn’t say that the route doesn’t have risks. The roads narrows quite a bit in places and there are no guard rails, so if you have a fear of heights or vertigo issues, this drive might not be for you.

As for the drive itself, take it slow and stay on your side of the road. Follow the proper etiquette that gives vehicles coming up the switchbacks the right of way. Look carefully as you round the curves to see if another vehicle is approaching from the other direction. A tap of the horn before reaching these hairpin turns is a great way to warn others that you are approaching. Keep your eyes on the road and avoid any temptation to take in the view while you’re driving. There are two places where you can pull off, enjoy the view, and take pictures. The best and widest pull off is near the top of the Dugway. This is where we took most of our photographs. 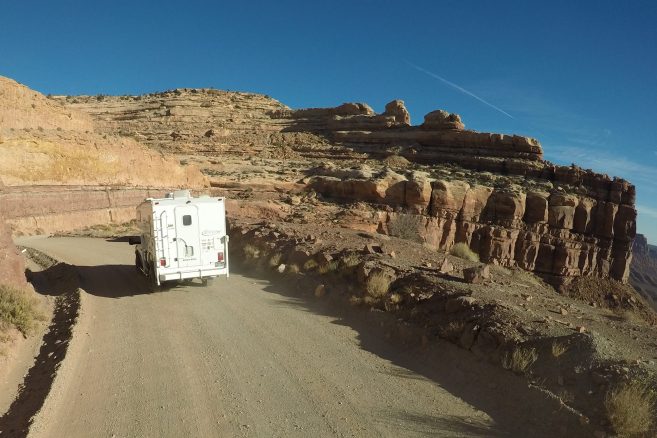 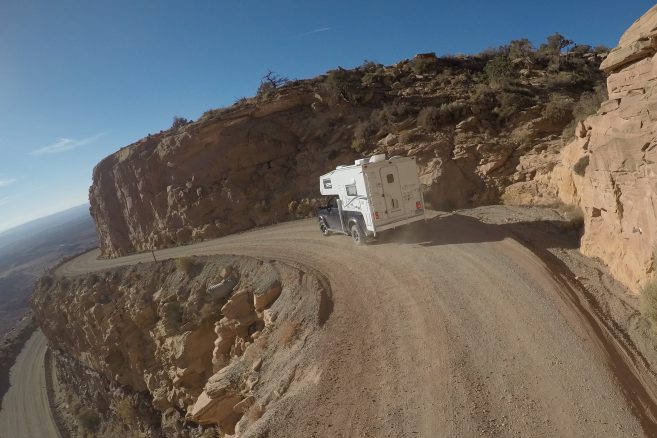 At an elevation of 6,400 feet, a big part of the Moki Dugway’s appeal is the breathtaking view from atop the mesa. To the east lies Sleeping Ute Mountain near Cortez, CO. Southeast is the Shiprock near Shiprock, NM. To the south you’ll find the Carrizo Mountains, which straddle New Mexico and Arizona. The popular tourist attraction at Monument Valley lies southeast on the Arizona and Utah border. Nearby to the east you can see several formations in the Valley of the Gods with the Lady in a Tub Butte the closest. To the south, the so-called Alhambra Rock, a dark brown volcanic monolith, can be seen.

For those with RVs, plentiful boondocking can be found near the Moki Dugway. Perhaps the best of these is at Muley Point, just five miles west from the top of the Dugway. However, due to the 6,400 feet elevation, camping at Muley Point is best done during late spring, summer, and early fall. Another great alternative is at the nearby Valley of the Gods, where, at an elevation of 5,100 feet, you can boondock next to one of the valley’s many scenic buttes. If you own a large RV like a Class A motorhome or fifth wheel and you want to boondock, I recommend setting up camp at Goosenecks State Park since neither Muley Point nor the Valley of the Gods can accommodate larger RVs. If you prefer full hookups, there are several RV parks located in the nearby towns of Mexican Hat, Bluff, and at Gouldings at Monument Valley.

Over time the forces of nature have sculpted some pretty amazing and unusual shapes out of solid rock. Here in the Western United States, we’ve been fortunate enough to see and photograph several of these. [read more]

ALL BOW DOWN Utah. The staid Mormon state that slaps you in the eyes with every corner, every turn, every time. The beer is good; commonplace session ales that average 3.2 percent alcohol by weight, [read more]