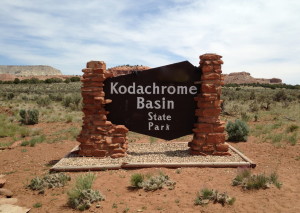 The state of Utah is renowned for its state and national parks that feature incredible landscapes not seen anywhere else on earth. Among the best of these has to be Kodachrome Basin State Park. First opened in 1962, the park awes tens of thousands of visitors each year with its brilliantly colored, other-worldly rock formations. The park received its name not from Paul Simon’s 1973 pop anthem, but from National Geographic photographers who used the revolutionary color film at the location in 1948. Over the years the name stuck and became official after Kodak granted rights to its use in 1963.

Located in south-central Utah, finding Kodachrome Basin State Park is pretty easy. To get there take the Utah Route-12, National Scenic Byway to the small town of Cannonville, then travel south on Cottonwood Canyon Rd. for nine miles until you reach the main entrance to the park. Just follow the signs. For the more adventurous, you can also take Cottonwood Canyon Road (Road 400) from the US-89 between Page, AZ and Kanab, UT, but this part of the road is unpaved and requires a high clearance vehicle. A 4×4 vehicle is often recommended. The elevation of Kodachrome Basin State Park is 5,800 feet, meaning the area enjoys relatively moderate temperatures in spring and fall, but can get quite hot in summer and very cold in winter. Admission is $6 per car.

Without a doubt, the prime attraction of Kodachrome Basin State Park is the breathtaking scenery. Here you’ll gaze upon multicolored rock formations of various shades of red, yellow, pink, white and brown. The landscapes of the park are dominated by 67 monolithic stone spires called sedimentary pipes or sand pipes. These pipes, which often sport unusual shapes and textures, are unlike anything I’ve ever seen elsewhere and, collectively, look like something you’d see in a children’s fairy tale or science fiction novel. Chimney Rock, the tallest of these spires, reaches an amazing 170 feet into the air. Geologists estimate that the basin and pipes within the park are some 180 million years old.

Geologists are unsure of the exact origin of the sedimentary pipes, but several theories have been postulated. The first theory supposes that earthquakes in the far distant past provided the force necessary to push course, water-saturated sediments through the underlying rock layers. These pathways eventually re-cemented and became harder than the surrounding Entrada sandstone, which eventually eroded away revealing the pipes. A second theory says that the pipes are the remnants of ancient hot springs. These hot springs became clogged with sediments, which eventually cemented together and became more erosion resistant that the surrounding sandstone. The latest theory postulates that the pipes were formed from water-saturated pockets buried underneath layers of other sediments. Pressure from the overlying sediments forced the wet slurry upwards into the overlying rock. Over millions of years this slurry became hardened and became more erosion resistant that the surrounding sandstone.

In the shape of a giant “Y,” the park offers two main roads where you can enjoy the other-worldly scenery from the comfort of your automobile. Neither road is particularly long, with the longest branch being a little over one mile long. The west branch of the road is paved and leads to the country store and campground and ends at the base of a steep cliff. The east branch of the road, which is unpaved, leads to Chimney Rock and Shakespeare Arch. Without a doubt, seeing Chimney Rock was the highlight of the drive. Here the road takes you within a few yards where you can obtain some impressive photographs of the massive monolith and the adjacent hills.

With five superb hiking trails, the best way to explore the park is by foot. The Nature Trail is, by far, the easiest and is only 1/2 mile long. Even though this footpath is short, it does provide spectacular views of the some of the most popular and shapely pipes in the basin, so it should not be missed. Another popular trail is the so-called Grand Parade Trail. This scenic 1.5-mile-long footpath stays on the floor of the basin and provides access to two box canyons. Panorama Trail snakes its way across the western side of the park and delivers hikers to some of the most interesting geological features in the park, including the “Cool Cave,” the “Secret Passage,” and “The Hat Shop.” It can be taken as either a 3 mile or a 6 mile loop. For those seeking a more expansive view, the 1.5-mile long Angel’s Palace Trail takes hikers to a cliff that rises 150 feet into the air. Finally, the Shakespeare Arch-Sentinel Trail takes explorers to the only large natural arch within the park and to the so-called Sentinel Rock.

For visitors who wish to camp in or near the park, there are some great options. The park offers a pretty impressive campground with 31 sites, but only four have full hookups. Facilities at the campground include restrooms, showers, potable water stations, and an RV dump station. Each site has a picnic table, cement pad, fire pit and barbecue grill. Firewood is available year-round. Dry camping here will cost you $16 a night, while full hookups will set you back $25 a night. For those without a tent or RV, a cabin can be rented for the night. A well-stocked country store is also located in the park.

If boondocking in the wilderness is more your style, then you’re in luck. You can’t boondock within the boundaries of the park, but you can within the massive Grand Staircase-Escalante National Monument, which basically surrounds the park. Travel for a few miles south on the aforementioned Cottonwood Canyon Road (Road 400) and you’ll be in the heart of BLM country where you can set up camp for the night. The boondocking possibilities are practically endless. Before or after you boondock, you may want to take a short drive to Grosvenor Arch, an intricate double arch located just 11 miles southeast of the park.

We visited the Kodachrome Basin State Park during the Memorial Day Weekend and were surprised by a few things. First, we expected the park to be a lot busier. The campground was full, that was no surprise for a holiday weekend. What was surprising was the lack of traffic on the roads and a lack of people on the trails. Indeed, we encountered just two other couples on the two hikes we undertook and encountered very little vehicle traffic in the park. The lack of traffic sat in stark contrast with the vast throngs we experienced at nearby Bryce Canyon National Park the next day. I have to admit this was refreshing and very welcome. Nature is best enjoyed in quiet solitude. Kodachrome Basin State Park is no different.

With its numerous state and national parks, the state of Utah has much to offer explorers and outdoors enthusiasts like us. While Bryce Canyon National Park and Zion National Park get most of the publicity, state parks like Kodachrome Basin deserve just as much attention. Sure it’s a lot smaller that the aforementioned national parks, but it’s also more intimate and less crowded. Whether you have just a few hours or a few days, you’ll be sure to enjoy your stay at Kodachrome Basin State Park. Its quiet, magical charm will be sure to captivate you and lure you back time and time again.

We Have A Winner! The 2014 TCM Calendar Contest

Today, I received a pleasant surprise in my email inbox from Angela White at Truck Camper Magazine. One of the three photographs I entered (Entry #120 on the docket) was one of the 13 contest [read more]

The great state of Utah is home to a large number of geologic wonders and breathtaking drives. The southeastern part of the state is where you can find several of these attractions. Among the best [read more]