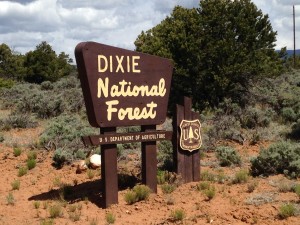 Having traveled on six continents and sailed every ocean, I consider myself well-traveled. I’ve seen a lot, but the geologic wonders of southern Utah never cease to amaze me. Some of these wonders are found in remote areas that were among the last places in the U.S. to be mapped. Fortunately, most of these are accessible by exploring the scenic backways found along Utah’s Route-12. These backways include the world-renowned Burr Trail in Capitol Reef National Park and the Cottonwood Canyon and Smoky Mountain Roads in the Grand Staircase-Escalante National Monument. Another scenic backway, popular with both explorers and adventure seekers alike, is the Hell’s Backbone Road in the Dixie National Forest.

Designated Forest Road 153, the Hell’s Backbone is starkly different from the other Route-12 scenic backways. Unlike the others, which cut through Utah’s high desert, the Hell’s Backbone meanders through Utah’s high country at a maximum elevation of 9,200 feet (because of the elevation the drive is a great way to beat the heat during the summer). The 38-mile-long-road was constructed by the Civilian Conservation Corps in the 1930s to connect the towns of Escalante and Boulder. The road is gravel covered, graded occasionally, and depending on the season and the weather, is suitable for all kinds of vehicles including passenger cars and small to medium size RVs.

There are two entrances to the Hell’s Backbone Road. In Escalante, turn north on North 300 East Road. Soon this road turns into Posey Lake Road. Turn right at the “T” intersection on Pine Creek Road. Take this road north to find the Hell’s Backbone Road at a main intersection on the right. The road is much easier to find in Boulder. Just turn west on Forest Road 153. Just look for the signs about 4 miles west of town. 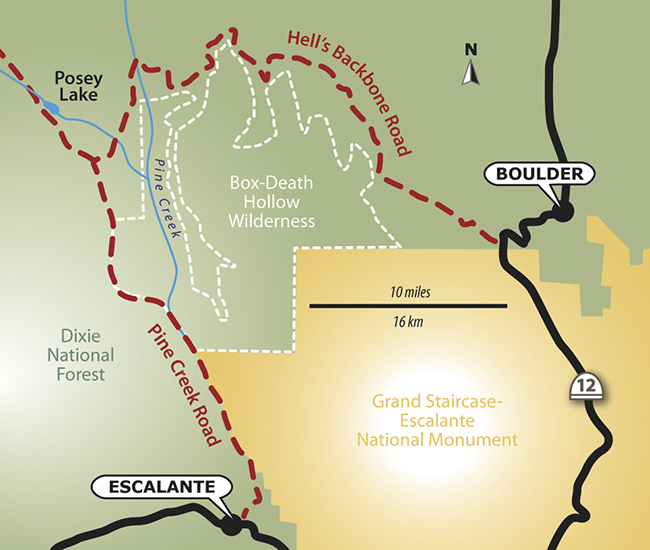 A word of caution before traveling on any of Utah’s scenic backways. While these back roads offer unequaled views, most are also unpaved and some very rough. Though passenger cars can navigate most roads, use of a high-clearance or 4×4 vehicle is recommended. These back roads, however, should be avoided completely if there is any chance of rain. All too often, motorists–even those driving 4×4 vehicles–have become stranded on these back roads after a downpour which often transforms the roads into a slick and muddy quagmire. The remoteness of some of these roads also means it will take many hours before any emergency help can arrive. I recommend checking with the nearest Bureau of Land Management office before leaving on your trip or click here for the latest National Park Service road report.

Without the Box-Death Hollow Wilderness, the Hell’s Backbone drive wouldn’t be nearly as breathtaking. Consisting of over 25,000 acres, Congress designated the area as a federal wilderness in 1984 and is currently managed by the U.S. Forest Service. The wilderness got its ominous name from the number of livestock that fell to their death trying to cross the treacherous canyons. The wilderness is home to several monoclines, the largest of which forms the Pine Creek area known as “the box.” To the east, Death Hollow Creek which runs along another monocline can be found. You can explore the Box-Death Hollow Wilderness via a 9-mile-long trail system. The Lower Box and Upper Box trail heads are on the road and are well-marked, as is the Death Hollow Trail Head located two miles west of the bridge. As you’d expect, the gray- and salmon-colored canyons often flood after heavy rains, so extreme caution is warranted during rainy weather. Fishing and wildlife abound in the wilderness, including deer, elk, and the occasional cougar.

If you’re planning on exploring Hell’s Backbone Road in a small RV, there are numerous places and forest roads along the entire route where you can boondock and camp for the night. However, if an established campground is more your style, there are two from which to choose. The excellent Posey Lake USFS Campground is the largest. It consists of 21, well-spaced sites with no hookups. Water spigots, however, are located onsite. Due to the elevation, which is at 8,800 feet, the campground is open from May through September only. Reservations can be made up to one year in advance. I’m told the fishing is excellent at Posey Lake, so if you’re an angler you may want to schedule a stop here during your visit to the Hell’s Backbone. Another gem is the tiny, six site Blue Spruce USFS Campground on Pine Creek. This is dry camping at its finest though there are several water spigots and a pit toilet provided. This is where we camped during our second tour of Hell’s Backbone and loved it.

Our Drive and Visit

We started our first drive in Boulder on a mostly cloudy day in late May with a storm clouds brewing far to the west. Weather forecasts had rain late in the day, but we felt that we had enough time to complete the drive. At the entrance near Boulder we passed a half-dozen Toyotas with Colorado plates pulling expedition trailers who had gathered on the side of the road. Seeing overlanders on these trails always brings a smile to my face, especially when they’re part of a large group. This was three or four days after the Overland Expo in Flagstaff, so I suspected that they may have come from the Expo and were making their way back home to Colorado.

Starting the drive in Boulder means we were soon passing through scenic Salt Gulch, a small farming community. Here we snapped several shots of the area, including herds of grazing cattle, before we began our ascent up Boulder Mountain. There isn’t much to see during this portion of the drive. Lots of Juniper and Pinion pines, but it did afford us some time to look for locations where we could boondock in the future. We found the surface of the road rough in places, lots of washboarding, so we had to take it easy in spots. We usually air down our tires when we hit these backways, but this time we didn’t because of the generally good condition of the road.

Within an hour we reached the highlight of the entire drive–the ascent up the Hell’s Backbone and the associated views of the Box-Death Hollow. The Hell’s Backbone name is well-deserved. Here the road follows a steep and narrow hogback with precipitous 1,500 foot drop-offs on either side. The road along this small stretch is steep and narrow and can be treacherous, especially in bad weather. We stopped our rig for a few minutes to take in the expansive views of the jagged, gray- and salmon-colored canyons. The vistas here are simply breathtaking. You’ll definitely want to take photographs if you are planning on taking this drive. Unfortunately, when we were there the skies were mostly cloudy, so we didn’t have the lighting needed to take particularly good shots.

Hell’s Backbone is also where you’ll find the famous Hell’s Backbone Bridge. This bridge spans a deep chasm where the heads of Box-Death Hollow and Sand Creek converge. The bridge, as it stands now, is only 109 feet long and 14 feet wide, wide enough for just a single vehicle. When the bridge was originally built-in 1933, it was constructed of heavy timber. The story about how the original span was constructed is fascinating. A plaque by the bridge explains how a man by the name Lorrel “Sixty” McInnely put his bulldozer into gear and towed a large compressor across two lodgepole pines that had been felled to span the deadly gap. “Sixty” must have had some pretty big “nads” to perform such a perilous feat. I get sweaty palms by simply being at those heights. Anyhow, “Sixty” obviously made it across the span and put his name into the history books. The original wood structure that “Sixty” helped build doesn’t exist anymore and was replaced with a stronger concrete and steel span in 2005.

The drive on the Hell’s Backbone Road is definitely worthy of being placed on your bucket list. We really enjoyed the two times we toured it. Including several stops for photos and lunch, it can be completed in three hours. Like I mentioned earlier, the drive can easily be navigated in a passenger car or small RV like a truck camper in good weather. That isn’t to say that the road is easy and relaxing to drive. It isn’t, especially if you suffer from a fear of heights and detest washboard surface roads, but at 38 miles long, it’s the shortest and least stressful of all the major Route-12 scenic backways. On a scale of one to 10, with 10 being the hardest, I’d give the Hell’s Backbone a truck camper difficulty rating of two.

The state of Utah is renowned for its state and national parks that feature incredible landscapes not seen anywhere else on earth. Among the best of these has to be Kodachrome Basin State Park. First [read more]

The Lake Powell reservoir on the Arizona and Utah border is a major tourist attraction receiving close to 2 million visitors a year. Popular recreational activities include fishing, boating, and camping. Officially, the lake it [read more]