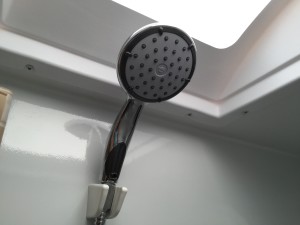 Of all the resources found in today’s recreational vehicle, water is, by far, the most precious. This is especially true for boondocking enthusiasts who prefer to camp in remote, faraway places and for overlanders who enjoy exploring areas where potable water is difficult to find. Both situations often apply to me, thus, I’m always looking for ways to conserve water in my camper, whether it’s developing good, water-saving habits or trying out new, water-saving devices.

Soon after ordering my 2016 Northstar Laredo truck camper, I was contacted by a representative at Ecocamel with an offer to try out one of their most popular water-saving showerheads, the Jetstorm Hand Held. At first, I was a bit hesitant to try it because I used a similar device in my last camper, the Oxygenics Shower Spa, and really liked it. In fact, I liked it so much that I wrote a very favorable review about it and was set on buying another one for the new camper. However, after reading an overwhelming number of positive reviews about the Jetstorm and the British company’s claims for even greater water savings, I decided to give the Ecocamel Jetstorm a try.

At first glance, the Ecocamel Jetstorm looks much different compared to the Oxygenics Shower Spa. The Jetstorm shower head is flat and produces a much wider stream of water compared to the Body Spa. Not only that, but the Jetstorm shower head is smaller, much lighter, and better balanced than the Body Spa. This makes the Jetstorm easier to use in smaller showers. This may not seem like that big of a deal for those who own large motorhomes, but it is for those of us who own small campers like me. And unlike the Oxygenics Body Spa, the much lighter and better balanced Jetstorm stays on its mount even on rough and uneven roads! 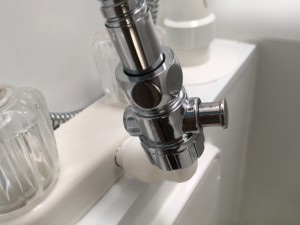 When ordering, don’t forget to purchase the optional shut off valve. This valve allows you take a real navy shower–get wet, turn the water off, soap up, then rinse off–quickly and easily. I was pleasantly surprised to find out that the Ecocamel shut off valve, unlike the one that comes with the Oxygenics Shower Spa, actually shuts the water off completely; there’s no continuous trickle of water when it’s shut off like the one you get with the Shower Spa. This feature saves even more water and takes the Ecocamel’s water conservation abilities to an even higher level. 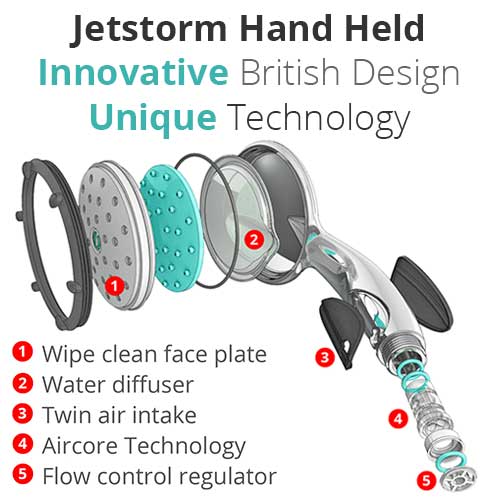 Ecocamel claims that the Jetstorm uses 45 percent less water than conventional shower heads. It accomplishes this through what Ecocamel calls their “AirCore Technology.” Air is forced into the water stream through a small hole at the base of the handle. When the water and air mix, the mixture spins around in the shower head at high-speed causing turbulence which increases water pressure. This process, they claim, forces the water out of the shower head equal to what you would experience with a conventional shower head. It sounds very similar to how the Oxygenics Shower Spa works, but Ecocamel claims an additional water savings of 15 percent over the Oxgenics shower head. Apparently, it achieves this by producing smaller water droplets and by incorporating a water flow regulator which limits the flow rate to a maximum of 2.1 gallons per minute.

All of this sounds impressive, but how does Ecocamel prove all of this? Ecocamel’s claims are backed up by what they call “rigorous testing” at an independent and accredited UK testing facility. This testing revealed a considerable savings compared with other shower head brands. This translates to a savings of over 2,700 gallons of water a year based on an average family of four. In addition, RV owners who have bought the Ecocamel Jetstorm are reporting a user satisfaction rating of 4.5 stars out of 5 on the Ecocamel Facebook page. All of these numbers are pretty impressive, no matter how you slice it and dice it.

One question about the Jetstorm that remains unanswered is its ability or inability to resist mineral buildup internally. Ecocamel’s website mentions the rubber nodules on the faceplate having this ability only. No mention is made of the Jetstorm’s internal components. The Oxygenics Body Spa, on the other hand, does. They even guarantee it. Oxygenics uses a special crystalline plastic called Delrin that prevents their shower heads from clogging. The mineral content in the water where I live is quite high and clogged shower heads are the norm, so any ability to resist clogs would be a very welcome feature. As soon as I get a definitive answer to this question, I’ll be sure to post it here. Still, a negative response would have little impact on my opinion of the Jetstorm.

So what’s the bottom line? Does the Ecocamel really work? The answer is a resounding, yes! The Ecocamel Jetstorm, teamed up with their optional shut off valve, uses less water than any other shower head we’ve ever used. Furthermore, it turns an ordinary, ho-hum RV shower experience into one that is both invigorating and enjoyable. Indeed, we like so much, that we’re ordering two for our home! It works that well. I didn’t think anyone could improve upon the Oxygenics Body Spa, but the Ecocamel Jetstorm does in a big way and does it with both elegance and style.

Review and Installation of the Oxygenics Body Spa

With a capacity of only 30 gallons of fresh water in my Wolf Creek truck camper, I’m always looking for ways to save water and reduce consumption. This is why I was intrigued when I [read more]