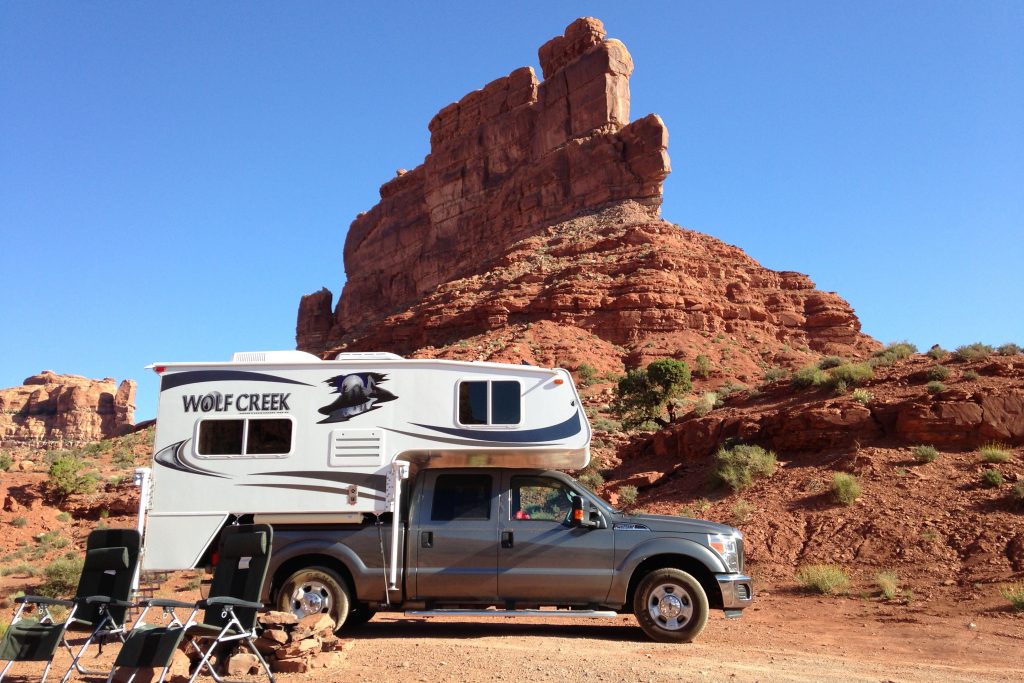 RV modifications seem to be all the rage with mods seemingly being featured on every RV related website and blog on the Internet. The topic is incredibly popular on this website, too. My RV Camper Modifications page is ranked number one in total page views and this doesn’t even include the modification articles themselves which are all highly ranked as well. There’s no doubt about, RV owners love to mod their RV’s. This article presents in a fun way the Top 5 Boondocking Mods

I must confess. I’m a mod junkie, too. As you can tell from my RV Modification page, I love modifying my truck camper. There’s something appealing about personalizing your RV to make it more functional, comfortable, and organized. Each trip or outing reveals a new need for some kind of modification or improvement. A new shelf here and 12 volt outlet there. A spice rack in the kitchen, the need for a light and storage hooks in an exterior storage compartment. I don’t think the process ever ends. At least for me, it hasn’t.

I’m often asked for my opinion on the best boondocking modifications, meaning the best modifications to make an RV more boondocking friendly. Choosing my number one mod was easy, but ranking the others proved to be much more difficult. They’re all useful in some way or I wouldn’t have installed them. It was difficult narrowing down the list, but after much personal wrangling, here are the Top 5 Boondocking Mods for truck campers and RVs: 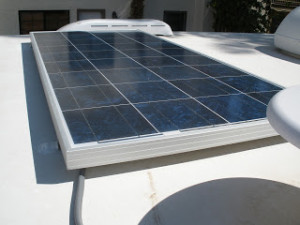 If you enjoy boondocking and hate the noise and smell of running a generator to recharge your batteries, then solar power has to be at the top of your mod list. What makes solar power so great? What are the benefits? First, the system requires practically no maintenance, as there are no moving parts. It’s also lightweight, mounts primarily in out of the way locations on the roof, and doesn’t take up valuable storage space in your RV. Perhaps more importantly, the solar power system doesn’t require fuel like a generator, is clean and whisper quiet, and utilizes a free and renewable source of energy that is good for the environment.

An RV solar power system isn’t that complex either. The solar power system consists of one or more solar panels to generate a charging current, a charge controller to regulate that charging current, and one or more deep cycle batteries to store that current. It also consists of ancillary components such as a roof top combiner box for connecting multiple solar panels to the system, mounting brackets for attaching the solar panels to the roof, wiring to connect everything together, fuses to protect your system, and an optional battery monitoring system. Total cost for my three panel, 240 watt system was about $550. 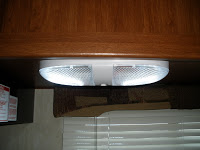 Without a doubt the Light Emitting Diode (LED) has to be one the most significant developments in the RV industry, particularly for the boondocking enthusiast. Why? Well, LED lights are not only brighter than old incandescent bulbs, but they also consume far less power. For example, the LEDs I retrofitted in my truck camper produce 332 lumens of light while consuming a paltry 52 milliamps (.65 watts) at 12.6 volts. That’s a far cry from the old 921 incandescent bulbs which consumed a whopping 1.4 amps (18 watts). But less power consumption isn’t the only benefit with LEDs. LEDs also last longer–around 50-60,000 hours–whereas incandescent bulbs last only 200 hours. The bottom line is that LEDs are great for the boondocking enthusiast and for the discriminating RV’er looking for a good value. Yes, LEDs are more expensive than incandescent bulbs, but the price has gone down substantially over the last few years making the investment well worth it. 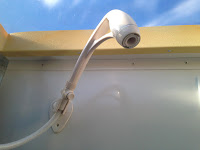 Easily, one of the Top 5 Boondocking Mods. Boondocking and showers don’t normally mix, but they do with the Oxygenics Body Spa shower head. Using the patented Venturi principle, the Body Spa uses 30 percent less water than traditional shower heads, while at the same time providing more water pressure. Impossible, you say? Nope, the company has done it in an attractive, affordable way. The Oxygenics Body Spa also comes with a push-button valve to turn-off the water, so you can take a real Navy shower–get wet, soap up, then rinse off–quickly and easily. Being a Navy retiree, I’ve taken more than my fair share of Navy showers over the years. In fact, I’ve became quite good at it. I could take a pretty decent shower using as little as two gallons of water back in the day. With the Body Spa, I now use even less. You can pickup the Oxygenics Body Spa for about $30 at Camping World. 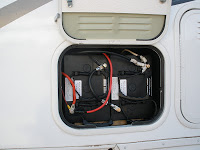 Quality deep cycle batteries are absolutely vital for a positive boondocking experience and the Absorbed Glass Mat (AGM) battery is simply the best. AGMs offer numerous benefits over traditional wet-cell batteries. First and foremost they require no maintenance or watering as they are sealed. AGMs also use the same battery charger as wet-cell batteries and since there is no liquid in them they are practically impervious to freeze damage. Another big benefit is that they can also be mounted on their sides. Most AGMs, like those made by Lifeline, have very thick positive plates that can suffer more discharge cycles than hybrid batteries commonly found in many RVs. More importantly, AGMs charge up to 20 percent faster and also have a slower self-discharge rate, about 1-3 percent a month. This makes AGMs perfect for solar applications and boondocking. 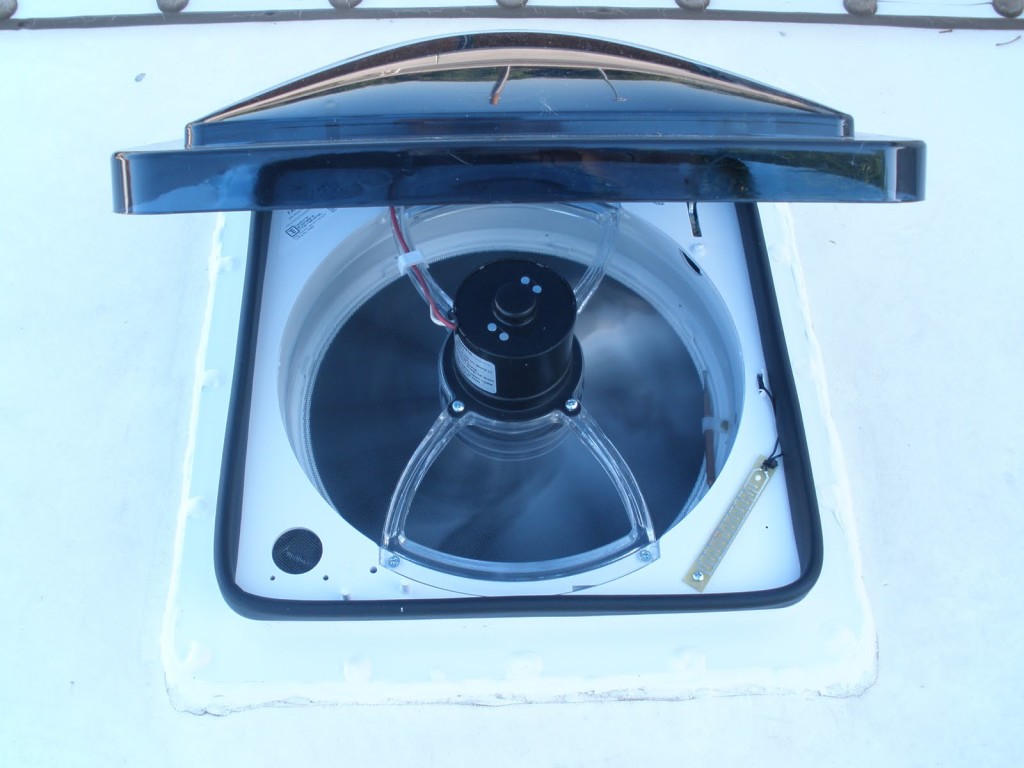 There’s no doubt about it, the Fan-tastic Vent is a must-have mod for boondocking enthusiasts who want to stay cool in the summer without having to run a generator and an A/C. This 12 volt, two-way, three-speed fan moves a tremendous amount of air while consuming a minimal amount of amperage (only 1.86 to 3 amps). Now, if you’re like me you prefer to spend most of your time outdoors, but sometimes you have no other recourse but to retreat to your RV when it rains or when the flies and mosquitoes get too bad. When shopping for your fan buy Fan-Tastic Vent 6000RBTA. This model not only has a temperature setting that activates when the inside of your RV reaches a certain temperature, but it also has a built-in rain sensor that automatically closes the vent lid when the first drops appear. This rugged, well-built fan also comes with a lifetime warranty and an industry-best customer service reputation that is second to none. The folks at Fan-tastic Vent will often replace damaged or worn out parts for free. 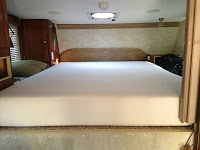 Not really a mod specific to boondocking but, hey, if you’re going to boondock you might as well be comfortable doing it, right? As you know most of the mattresses that you find in today’s RVs are total crap. Such was the case with the mattress that came in my truck camper. After researching numerous options, I chose to go with an 8-inch thick Sleep Science Memory Foam Mattress by South Bay International. The difference between the OEM mattress and the Sleep Science mattress is like night and day. In fact, the memory foam mattress is so comfortable that my wife and I actually look forward to sleeping in our camper now. Can you say that about the mattress in your RV now? If you can’t, then you need to make a change.

Those are Truck Camper Adventure’s Top 5 Boondocking Mods. Agree with the list or disagree? I’d be interested to get your thoughts here in the comments section.

Review and Installation of the Oxygenics Body Spa

With a capacity of only 30 gallons of fresh water in my Wolf Creek truck camper, I’m always looking for ways to save water and reduce consumption. This is why I was intrigued when I [read more]