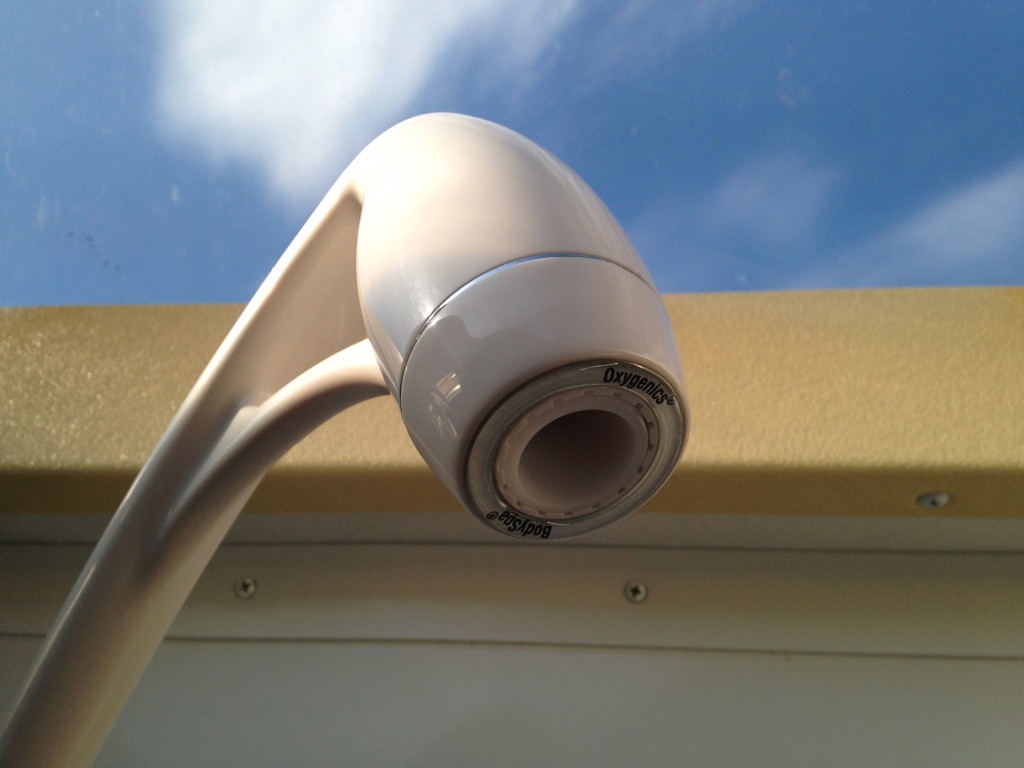 With a capacity of only 30 gallons of fresh water in my Wolf Creek truck camper, I’m always looking for ways to save water and reduce consumption. This is why I was intrigued when I came across the Oxygenics Body Spa

shower head at my local RV supply store. Oxygenics claims that the Body Spa reduces water consumption, while at the same time providing more water pressure. What a company claims, however, is often fantasy when it comes to real life. Fortunately, Oxygenics’ claims about their Body Spa shower head appear to be pretty legit.

I admit it. I like my showers. Almost as much as my fondness for boondocking. You’d think that the two wouldn’t be very compatible, but they are if you take navy showers. What is a navy shower? It’s simply a shower that involves getting wet, turning off the water, soaping up, then turning the water on again to rinse off. Having served on several ships during my 24 years in the U.S. Navy, I’ve taken more than my fair share of navy showers. In fact, over the years I’ve become quite good at it. I can take a pretty decent shower using as little as two gallons of water.

appears to be tailor-made for boondocking and navy showers. Oxygenics claims that the Body Spa uses up to 30 percent less water, while at the same time increasing water pressure. How does Oxygenics accomplish this? Through a patented process that infuses the water spray with 10 times more oxygen than with regular shower heads. The literature you get with the Body Spa doesn’t explain how this process works, but it does. The pressure you get from this shower head is noticeably stronger than with the shower head that came with my camper. The stronger flow will rinse the soap from your body and shampoo from your hair much faster and more efficiently. This fact alone means you’ll use less water. How much less? I’m not sure. I need more time out in the field to determine exactly how much, but there’s no doubt I’m using less. 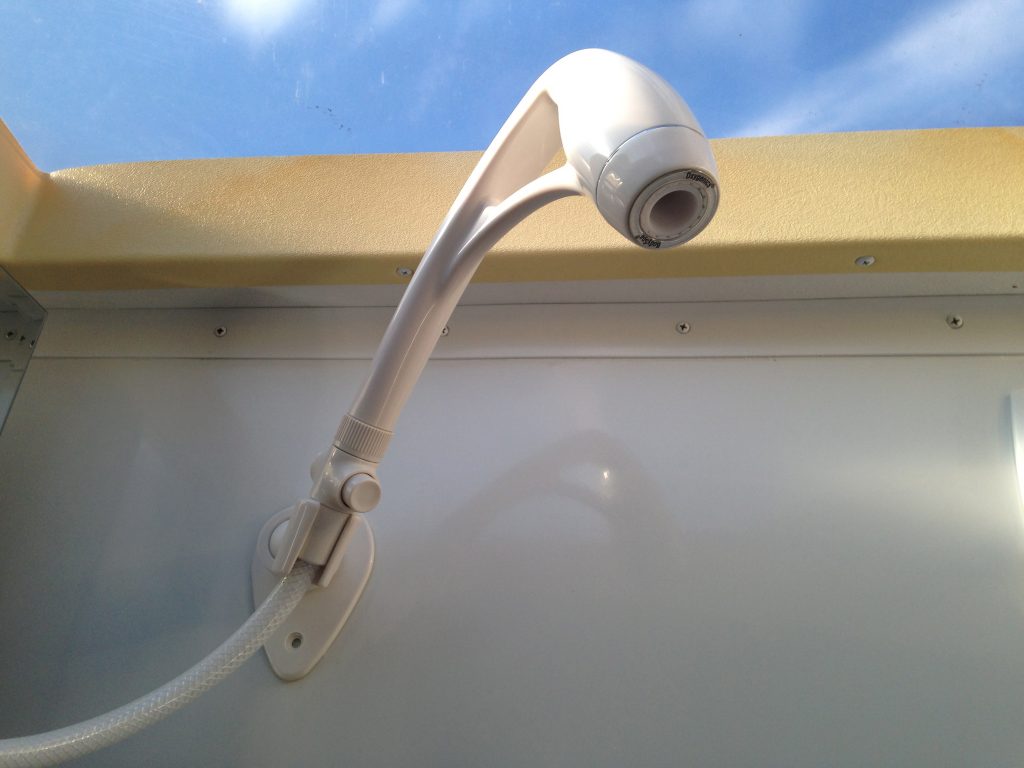 Oxygenics guarantees that the Body Spa shower head will never clog from mineral deposits. What makes this possible is the use of Delrin, a special crystalline plastic engineered specifically for wet environments. Delrin is used in all kinds of commercial applications including gears, bearings, bushings, rollers, fittings and electrical insulator parts. Delrin is durable, wears extremely well,  and resists the absorption of water. You’ll find that most of the internal components of the Body Spa are made from this crystalline plastic. The mineral content in the water where I live is quite high and clogged shower heads are the norm rather than the exception, so this ability to resist clogs is a very welcome feature.

The Oxygenics Body Spa comes in three different finishes to work with almost any kind of decor: brushed nickel, chrome, and white. The MSRP for the three finishes range from $39 to $49 with the brushed nickel finish being the most expensive of the three. For my wet bath, I actually prefer the white plastic finish which looks better and weighs less than the metallic versions. Amazon.com Prime offers the white plastic Oxygenics Body Spa

version for around $39 with free shipping. If you like to shop in stores, however, the best price I found for the white plastic version was through Camping World for $30 with the Good Sam member discount.

The Body Spa does have one flaw worth pointing out–the so-called SmartPause shut-off valve. If you’re expecting this push button valve to completely stop the flow of water while you lather up then you’ll be disappointed. When the valve is engaged a tiny trickle of water still falls from the shower head. This trickle prevents the person showering from being blasted with cold or hot water when the valve is released. We’ve all experienced this one time or another and it isn’t fun. Unfortunately, this trickle wastes water, which is the reason why I bought the Body Spa in the first place. This issue can easily be solved with a quick trip to a local big box store for another push button valve that doesn’t leak, but it’s annoying that one has to do this in the first place.

Installing the Body Spa was quick and easy. The installation kit includes a plastic swivel mount, a 60 inch long water hose, two mounting screws, three strips of high bond tape, and a small role of plumber’s tape. The swivel mount can be attached to the wall by using either the screws that came with the kit or the high bond tape. I’ve never been a fan of drilling holes in my fiberglass wet bath enclosure, so I used the high bond tape for my installation instead. The Body Spa shower hose is interchangeable with the OEM hose, so if you want to use the old one you can. The total installation time took about 20 minutes.

How well does the Body Spa travel? Not well, not well at all. The swivel mount isn’t large enough to keep the heavy, bulbous, and unbalanced shower head completely secure on the road. I recommend removing the Body Spa from the mount while you travel and place it in a location where it can avoid getting damaged. We like to place ours in the bathroom sink wrapped in a hand towel. It works for us and avoids unpleasant surprises after driving on rough, dirt roads.

So what’s the bottom line? If you want a more satisfying shower in your RV, you should take a hard look at the Oxygenics Body Spa

. The reduced water consumption and increased flow make it a win-win for boondocking enthusiasts looking to enjoy their outings and RVs even more. In fact, of all the modifications I’ve made to my truck camper, I’d have to rate the Oxygenics Body Spa as one of my top five. It’s that good and saves that much water. And at only $30, it’s a great value.

I spent the last couple days installing the two 60 watt solar panels on the roof of my Wolf Creek 850 truck camper. After giving it some serious thought, I decided to place the two [read more]

To the RV owner who cherishes independence from RV Parks and campgrounds and who hates the noise and smell of running a generator, solar power is, without a doubt, one the greatest technological advancements to [read more]

Camping Banned on Maine Mountain After Partiers Trash the Place

In what is becoming more and more of an occurrence on public land, park officials in the state of Maine are closing Tumbledown Mountain to informal camping, saying that overnight partiers have been trashing the [read more]