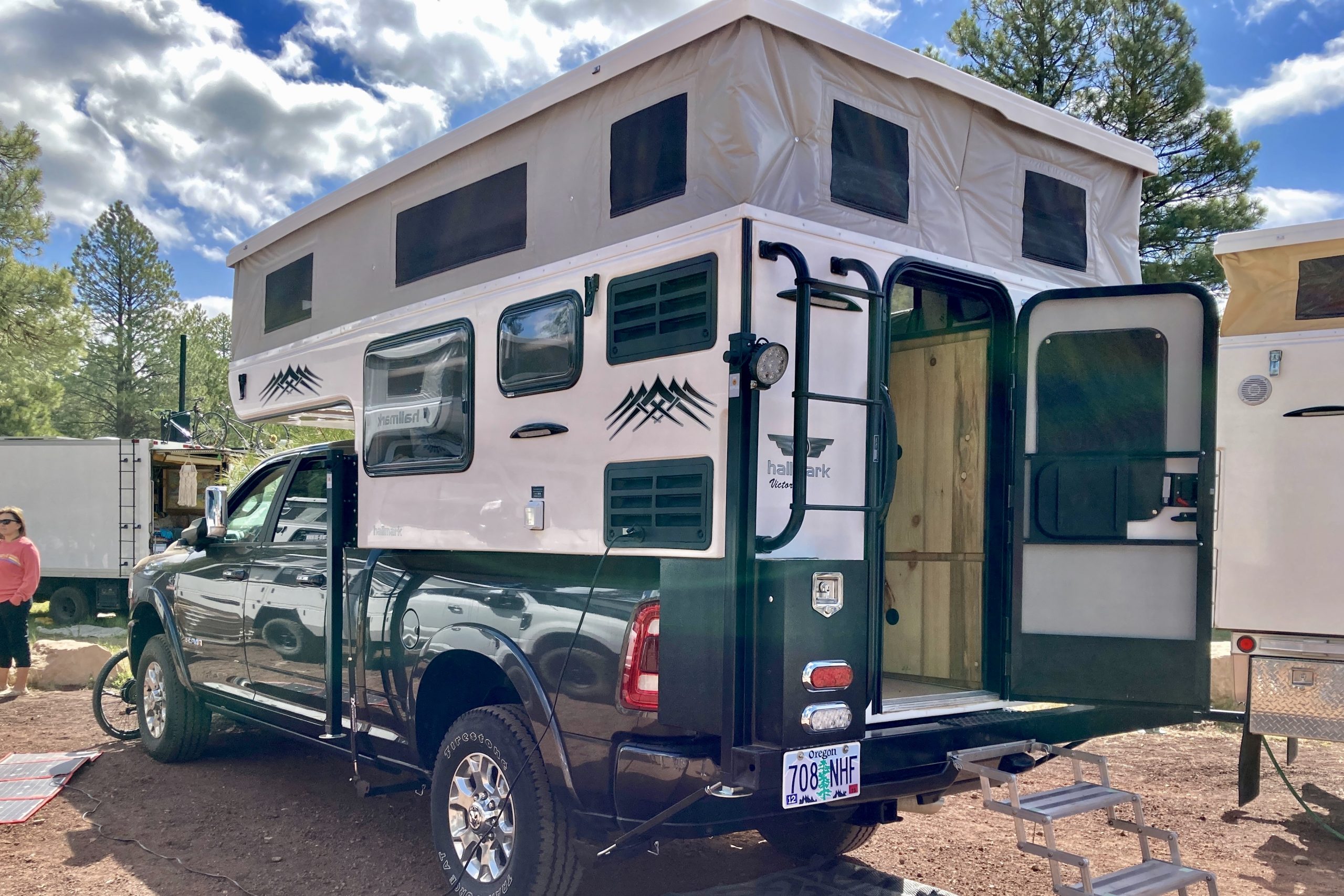 We love the Overland Expo West. New truck campers and expedition rigs are rolled out for this big show every year, and if there’s anything we love here at Truck Camper Adventure, it’s new truck campers. For the 2022 Overland Expo West, Hallmark rolled out an impressive quartet of rigs, the most notable of which was a Guanella build called the Stormtrooper that took first place. Another notable entry with an even better story, however, was a new front dinette model called the Victor. After a nearly 30-year hiatus, Hallmark RV decided to reboot the one-time best seller due to high demand.

“The Victor is a resurrection of a 1960s floorplan,” explained Matt Ward, Marketing Director at Hallmark Campers. “Actually the Victor gave birth to the Guanella, so the Guanella is actually what phased out the Victor. But we’ve had a lot of customers with older Victors come back to us saying, ‘I want that front dinette.’ The old Victor campers were wearing out, so we decided to bring it back after receiving numerous requests from customers.”

It makes a lot of sense to resurrect a venerable classic like the Hallmark Victor. Truck campers with front dinettes have long been standard in the industry. Indeed, the front dinette has been a mainstay at Alaskan since the late 1950s and Four Wheel Campers since the 1970s with its popular Grandby model. Numerous, now defunct, manufacturers like Avion, Mitchell, Silver Streak, and Red Dale offered a front dinette floorplan as well. Fortunately, Matt was able to locate old blueprints of the Victor in Hallmark’s archives. A few employees still working at Hallmark had worked on the old classic as well.

Things appeared to be lining up, but bringing back a discontinued camper like the Victor isn’t easy. The biggest obstacle was convincing his dad and Hallmark owner, Bill Ward, that it was the right thing to do. “At first my dad was like, ‘why are you going to do this? The Guanella phased out the Victor,”’ Matt recalled. “But we had to update the molds anyways because of the change to Arctic Tern windows, so it just lent itself to being able to build the Victor. As soon as he realized that, he was less opposed to doing it and as we got more into the project he became more excited and more involved with the process.”

Work on the 2022 Victor proceeded quickly. The Hallmark team built a skeleton cabinet system from the original prints and then later modified them to fit company’s fiberglass composite walls and floors. Fortunately, the company was able to leverage the same roof and the rear refrigerator and closet area as the Guanella. These savings sped up the development process considerably.

By today’s standards, the front dinette found in the 2022 Victor is big. It measures a whopping 80×39-inches and collapses into a large bed, perfect for guests or for the kiddies. According to Matt, the dinette is even bigger than the ones found in the company’s 8.5-foot flatbed models, and can accommodate both him and his brother, Andy, easily. The dinette table uses either a fixed pedestal or a Lagun swivel mount. The pedestal mount, according to Matt, is standard.

Aside from the front dinette, the Victor’s 8-foot floorplan features an east-west 60×80-inch queen-size bed with under-bed storage, a split kitchen with a refrigerator and stove on the driver side and the sink on the passenger side. The camper also offers attractive overhead cabinets, molded countertops, a 22 gallon fresh water holding tank, a 20 pound propane tank, and an optional toilet/shower on the passenger side. For the toilet, customers can opt for either a Thetford porta pottie, a Thetford cassette toilet, or a Cleanwaste portable toilet, the latter of which folds down to the size of a brief case and weighs only 7 pounds. The toilet compartment can be outfitted with either a standalone toilet, with pull-out drawers, or with a mini-shower.

The Victor is compatible with full-size short-bed and long-bed trucks. Like all Hallmark truck campers, it features a unique “double frame” with an inner wood frame reinforced with a molded composite fiberglass EXO frame. This combination produces an attractive camper capable of tackling the roughest terrain and climates on the continent. Yet, the weight of this double-framed camper is about 1,700 pounds dry and about 2,000 pounds wet, making it perfect match for some half-ton trucks and most 3/4-ton trucks.

At the Overland Expo West, the Victor was shown mounted on a more capable Ram 3500 SRW truck. The rear of the camper was outfitted with two 5 gallon Wavian NATO diesel fuel canisters. Hallmark also offers canisters for extra gasoline or potable water.

While the Victor’s front dinette hearkens back to the 1960s when the Beatles, Hula Hoops, and the Ford Mustang were the rage, numerous enhancements were incorporated to make the 2022 incarnation of the Victor even better. These enhancements include state-of-the-art lithium batteries, solar power, a NovaKool R4500 DC compressor refrigerator, interior and exterior LEDs, a Dometic RTX-2000 DC air conditioner, and Truma water heating and furnace systems. None of this technology existed in the ’60s let alone the mid-90s when the Victor was phased out.

For battery charging, the Progressive Dynamics 4000 series “Mighty Mini” comes standard. For most owners, the PD system will be more than sufficient. Yet, Hallmark also offers the Redarc Manager 30, a lithium compatible battery management system capable of charging and incorporating multiple AC, DC to DC, and solar inputs. But as Matt points out, the Manager 30 is not designed to run a rig on shore power. The Mighty Mini is better suited for that role.

The advent of DC air conditioning is a recent development in the industry and one that we’ve been tracking closely here at Truck Camper Adventure. With the popularity of LiFePO4 lithium ion batteries, truck campers can run low amperage AC and DC air conditioners for several hours a day. Ten years ago only six-figure expedition rigs like the EarthRoamer, running gargantuan 4D and 8D AGM batteries, could do so.

The Dometic RTX-2000 DC Air Conditioner is a terrific option. It offers one of the lowest power consumption rates in the industry. The low profile unit consumes only 19.5 amps DC in the Eco mode and 29 amps DC on maximum, far better than even the popular Coleman Polar Cub 9200 110 volt model. Better yet, the RTX-2000 is rated for 6,824 BTUs and weighs only 72 pounds. This BTU rating has been proven to be more than enough for all but the largest truck campers.

Another popular trend in the industry is switching to Truma water heaters and furnaces. Truck Camper Adventure has encouraged the switch from archaic 1950s technology to lighter, better built, more efficient appliances for years. While Hallmark has been loath to use the popular Truma Combi due to space constraints, the company has opted to go with the equally efficient Truma VarioHeat and Truma AquaGo with great success. We still prefer the Combi, but either one of these Truma appliances are still a win.

So how well was the Victor received at the Overland Expo West?

“I would say the response was 50-50,” Matt explained. “I wasn’t sure what to expect. The response was mixed. Those with families liked the extra space and sleeping area in the Victor, but empty nesters and couples without kids preferred the side dinette of the Guanella.”

If anything, the relaunch of the Victor shows that Hallmark team isn’t content to settle for the status quo. In spite of the pandemic, 2021 and 2022 have been banner years for the Lupton, Colorado-based company with the release of a small 6.5-foot Colorado flatbed, a hybrid called the “half-n-half,” comprised of a flatbed camper on one side and standard slide-in on the other, and an “overlander series” option using Redarc and Tern Overland components and more.

But for now, Hallmark’s focus and excitement has been on the Victor. The camper was a best seller for over 25 years and according to Matt, the experience of resurrecting the old camper with his father has been a special experience.

“Growing up we would always go on summer camping trips. I remember that my dad would always take a pop-up and my uncle a hard-side. We always took Victors because it was the most popular camper. When we started building it again I thought, this is what we used to take camping. Back then, as a kid, it didn’t mean anything to me, but now it’s my life. This really hit me,” he said. 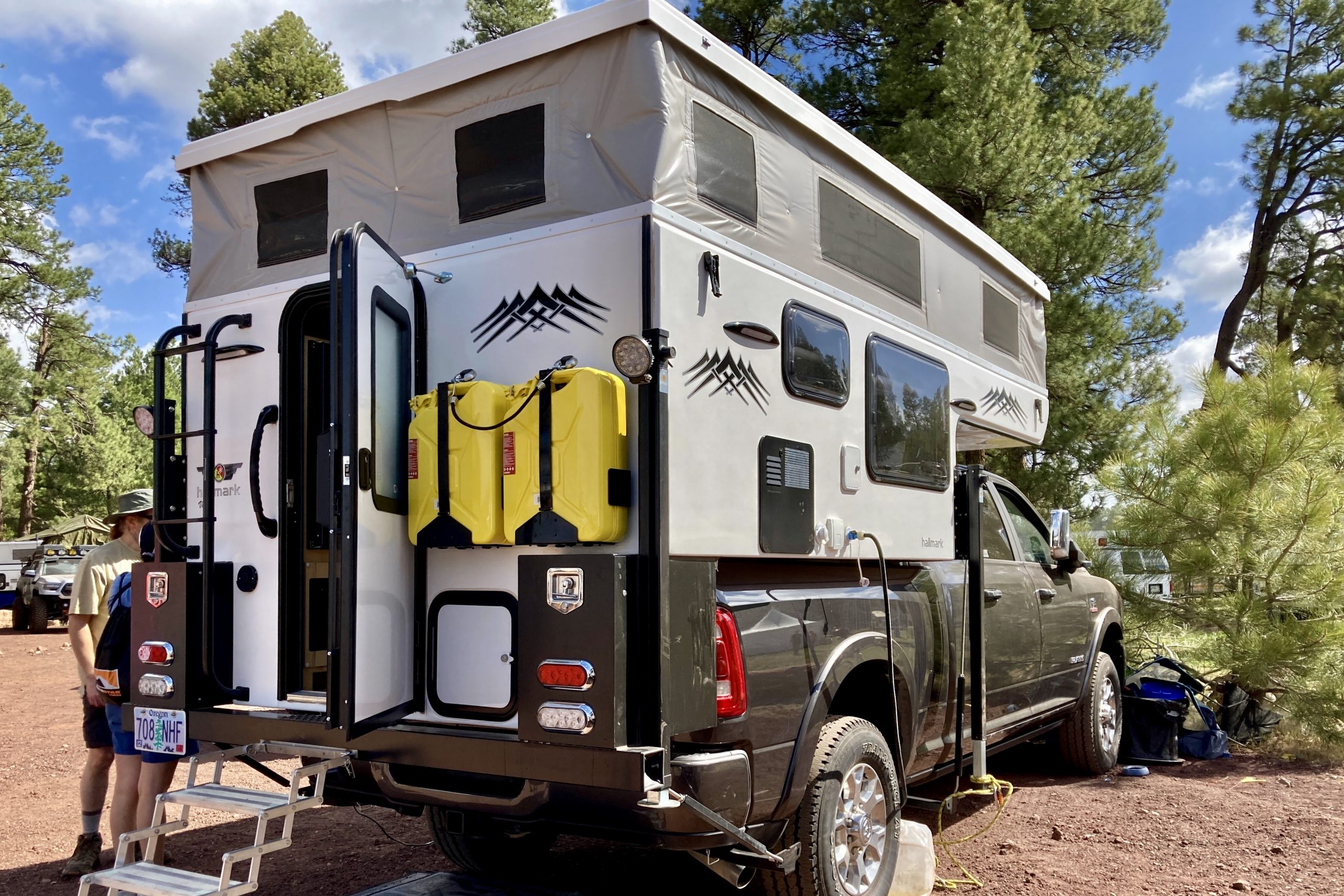 Truck Camper Adventure is proud to announce that we’ll be attending the 2016 Overland Expo West in Flagstaff, Arizona. The event runs from May 20-22, 2016. This will be the third time that Truck Camper [read more]

The following note was recently received from Lodestone Events, owner and organizer of the annual Overland Expo. It is with a heavy heart that we announce all in-person Overland Expo events have been postponed for [read more]