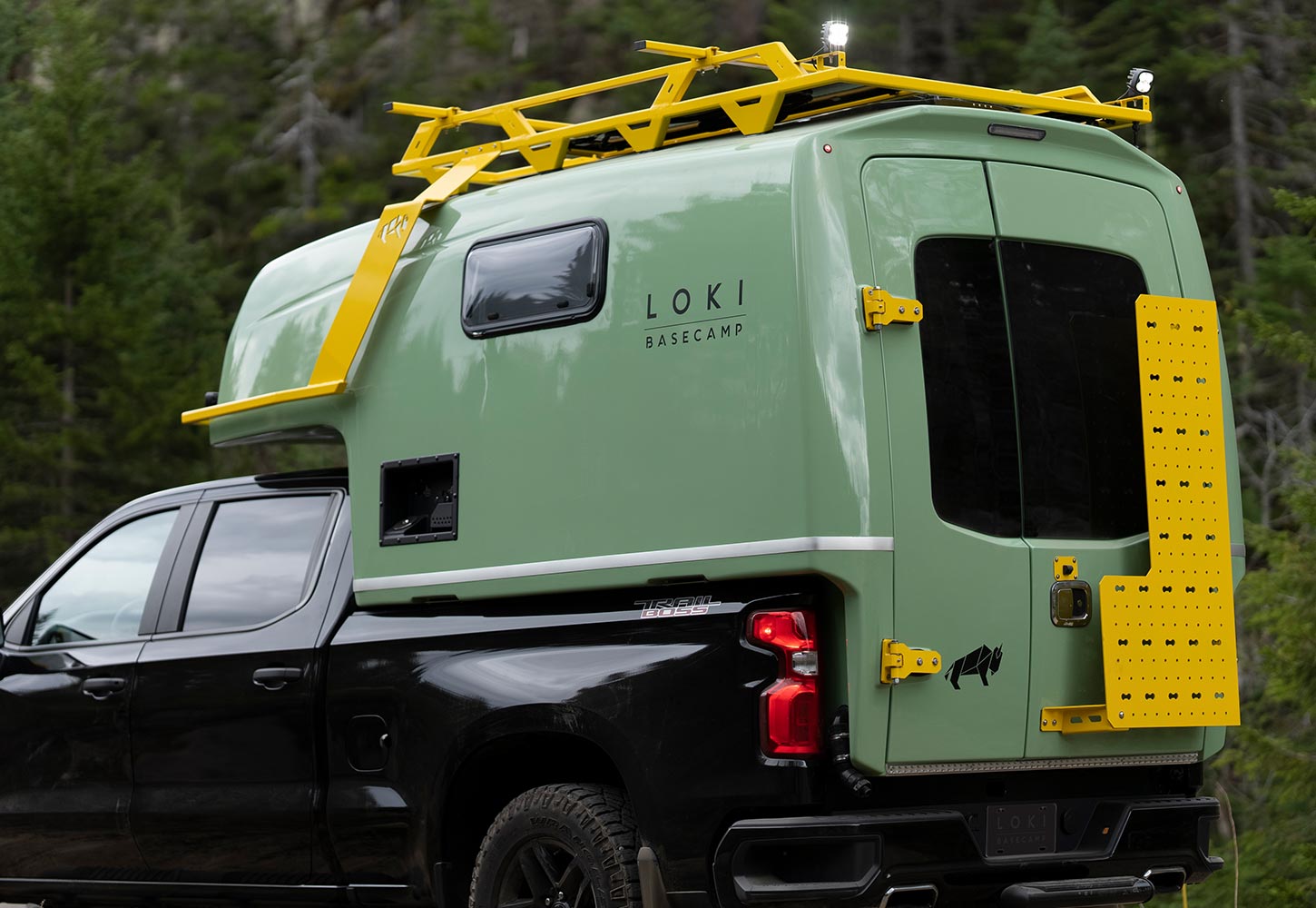 We love the Overland Expo. New truck campers and expedition rigs are rolled out for this big show every year, and for the 2022 Overland Expo West our friends at Loki Basecamp unveiled the Icarus 8. Loki founder and CEO, Pierre-Mathieu Roy, was proud to show us the Icarus and now we know why. The Icarus series is the latest offering by Loki Basecamp, and in our opinion, it’s the best. Yes, we were blown away by the Falcon when it debuted two years ago, but we like the good looks, aerodynamic hull, and the space-age interior of the Icarus even more. That’s why were excited to learn about Loki’s latest offering, an even smaller version made for short-bed trucks called the Icarus 6. This isn’t just another ho-hum truck camper, the Icarus 6 is a lean, green, overlanding machine.

So what sets the Loki Basecamp lineup apart from other truck camper makes? First, it’s Loki’s quality and incredible attention to detail. The Icarus isn’t a mass-produced, cheap Elkhart build. This camper will last for decades. Second, it’s the Icarus’ four-season ability. Many manufacturers say that their campers are four-season capable, but that’s often a fairy tale. The Icarus features robust R16 insulation and is designed and built in Canada, so you know it can handle practically any kind of weather thrown at it. Still not convinced? Loki tested the Icarus in -22F temperatures during a Canadian winter and it performed flawlessly.

The overall shape of the Icarus 6 is similar to the larger Icarus 8, but the floor length is a good 1.5-feet shorter. Like the Icarus 8, you’ll find a kitchen on the driver side and a bench dinette on the passenger side, including storage for a portable toilet. The main difference with the Icarus 6, however, is that the mud room on the driver side has been eliminated and the 55-inch-long dinette is 2-feet shorter, yet the front cabover and living area in the front remained untouched. Like the Icarus 8, the smaller Icarus still offers a quality, space-age interior with a Tern Overland roof hatch and insulated side windows plus front cabover windows reminiscent of something you’d see in Star Wars. Han Solo would feel at home in the Icarus.

“We’re really excited about the Icarus 6, said Pierre-Mathieu Roy. “We believe it’s the perfect sizing, but with the Icarus being 8-feet long, it’s not for everybody because it’s too long, more difficult to park. Some trucks, like the Ram Power Wagon, even though they’re great, don’t come with an 8-foot bed, so at some point we had to present the Icarus 6 for short-bed trucks. We were kind of scared about it being too small, too short. Yet, it’s the exact same width as the Icarus 8, but it’s 6.5-feet long instead of 8-feet. The end result is that we were able cut 500 pounds of weight. We’re really happy with the end result.”

Are there any other differences between the two Icarus models? Not really. The smaller Icarus 6 still offers Loki’s trademark rear double-door with a pull-down screen to keep the bugs out, overhead storage cabinets, an air compressor, a DC compressor refrigerator, insulated walls, heated floors, and a Webasto furnace and water heater. Better yet, the Icarus 6 offers the same size holding tanks as the Icarus 8, including a 15-gallon fresh tank, a 4.2-gallon water heater, and a 13-gallon grey tank; the camper uses a portable toilet so no black tank is included. Moreover, the roof rack system on the Icarus 6 can support an amazing 1,500 pounds of weight for gear and roof-top tents. Practically anything that the customer wants.

We were happy to learn that the electrical system in the Icarus 6 is practically identical to the Icarus 8 too. With the Icarus 6 being 1.5 feet shorter, we thought that Loki might downsize the system, but fortunately that didn’t happen. The Icarus 6 offers the same 600 amp hour lithium battery bank, 2,000 watt inverter, 270 watt solar power system (30 watts smaller than the Icarus 8), Redarc RedVision Total Management System, and Autoclima 12 volt air conditioner as the Icarus 8. If this camper’s sustainable electrical system doesn’t impress you, nothing will.

While the Icarus 6 is Loki Basecamp’s smallest offering, the fortified fiberglass camper still weighs only 2,000 pounds loaded. This means you’ll need a full-size, short-bed truck to haul it, meaning the Toyota Tacoma and Ford Ranger are out. Instead, you’ll need a Ford F150 or the Toyota Tundra, or better yet, a truck with a more payload like the Ford F250 and F350, the Ram 2500 and 3500, and the GMC Sierra and Chevy Silverado 2500 and 3500 models. Loki already has plans to build an all-electric Icarus compatible the Rivian, Tesla Cybertruck, and Ford F150 Lightning. The demo Icarus 6 shown here is mounted on a Toyota Tundra, a half-ton truck.

This brings up an important point about the Icarus 6. The low profile of the Icarus provides a better driving experience than high-profile truck campers like Arctic Fox and Eagle Cap campers. This is due primarily to the better aerodynamics of the fiberglass shell, but the lower weight and center of gravity also helps. With a well-matched truck, this makes the Icarus fun to drive, on pavement and off. No white knuckle driving here, even in heavy winds. The only things we don’t like are the camper’s puny 15 gallon fresh water holding tank and east-west pull-out cabover bed, but, hey, you can’t get everything in a camper of this size.

As for the Icarus 6 green and yellow combination shown in the photographs, it was intended to be a one-time offering for a Canadian client. But Pierre states that they like the combination so much the company will keep offering it as an option. Customers largely choose gray and black, but as Pierre points out, “customers can choose their own colors. Green is color that we choose for demo build, but all the colors are fully customizable for all units. It’s not one color per year or whatever. At first, we weren’t sure about the green and yellow combination for the Icarus 6 demo, but the end result is just stunning.”

There’s no doubt about it, the Loki Icarus 6 is a lean, green, overlanding machine. It’s lean because it provides everything you need and nothing you don’t. It’s green because the electrical system is sustainable with a 600 amp hour lithium battery bank and a 270 watt solar power system. It’s an overlanding machine because of it’s size, weight, and low profile—unlike the EarthRoamer, you can take the Icarus practically anywhere.

So how much does this space-age, overlanding beast cost? The Icarus 6 lists for $69,000, a cool $10,000 less than the Icarus 8. Expensive? Yes, but when you consider the quality and the amenities, the value is there. This isn’t a cheap Elkhart build that will start leaking and fall apart in two years; this reinforced fiberglass camper with R16 insulation will last for decades.

If anything, the Icarus 6 shows that the Loki Basecamp team isn’t content to rest on its laurels. In spite of the pandemic and all of the supply-chain challenges associated with it, 2021 and 2022 have been good to the Canadian-based company. Plans are already in place to produce a larger expedition series camper with a larger box and truck as well as a longer and slightly larger Icarus with north-south sleeping and more headroom.

Yet, for the SEMA show in Las Vegas in November, Pierre said they will be revealing something new.

“We’ll probably bring an Icarus 8 with our own truck bed system. I know there are lots of guys are building truck bed systems right now, but it has been difficult to communicate rush orders with the backlogs so many of them have. So we decided to build our own, making sure first it fits our units and then after that campers made by everybody else. It’s not a flat bed system. It’s really like a replica of the bed in the truck except that we’re going to have a whole bunch of of storage compartments on the side and additional functionality like an air compressor with a reservoir tank,” he said.

Truck Camper Adventure is proud to present this interview with Mike Cash, a long-time reader and follower of this website. Mike was born and raised in rural Indiana and now makes Arizona his home. He [read more]