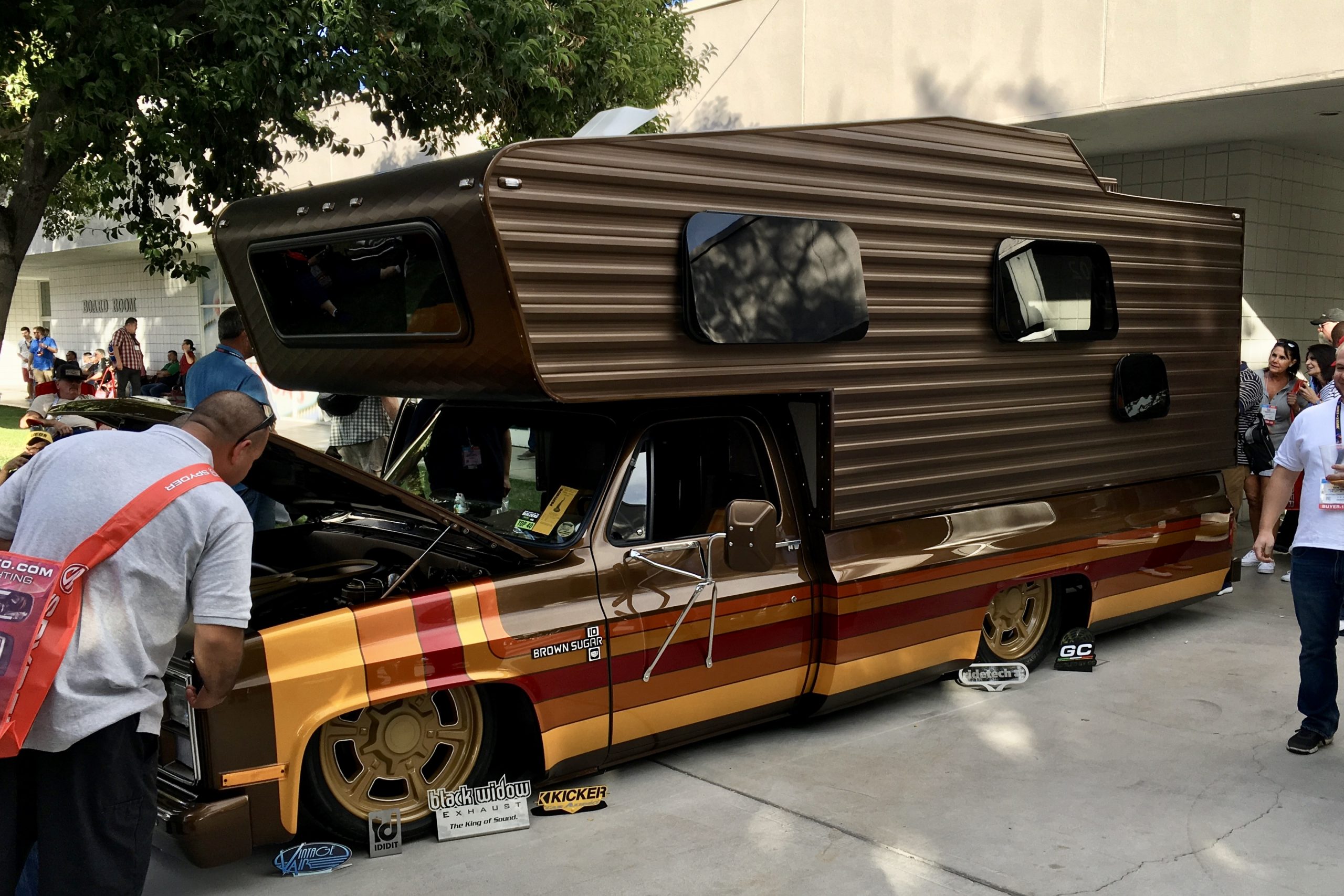 The 2019 SEMA show in Las Vegas was one for the ages. It was probably the largest SEMA show ever and was the first to feature an Overland Experience area showcasing rigs of all types including truck campers and toppers by Lance, Four Wheel Campers, AT Overland, and Northern Lite. One truck camper not featured in the Overland area, yet was prominently displayed at the show, was a low rider rig called Brown Sugar. Featuring a 1983 Chevy C10 square-body pickup with an oversize, retro-looking truck camper mounted on top, Brown Sugar drew substantial crowds and social media interest during the show. More a tailgate camper rather than something you’d actually go camping in, Brown Sugar features a full-length bar with a large TV, an air lift system, and an oversize sound system. Still, the camper has the basic amenities one would expect to find in a slide-in truck camper like a queen-size bed and a bathroom. There’s no doubt about it, Brown Sugar is a sweet delight.

Brown Sugar was built by River City Rods and Fabrication of Davenport, Iowa. According the River City Rods owner, Craig Piggott, some of the parts came from a 1983 Coachman C20 motorhome. Unfortunately, the water-logged motorhome was in bad shape with too many unusable parts, so major changes needed to be made. With a team of talented people and a full-blown fabrication shop, however, River City Rods was up for the challenge. Indeed, soon after the project started, the decision was made to convert the dilapidated motorhome into a custom slide-in truck camper and feature it at SEMA. The fabrication shop was going all-in.

“We built this for a guy who actually runs an RV business and he bought this thing for little or nothing, and we thought, ‘we’ll just lower this thing, we’ll do this and that,’ and we start getting into it and then the snowball effect happened. So what we decided to do was to take this thing and make it into a slide-in camper. The beauty of this is that we were able to create a slide-in camper with 11-foot-long bed sides,” Piggott said.

Brown Sugar was constructed almost entirely in-house at River City Rods. It started as a basic cab and chassis setup accompanied by the steel floor and wooden sides. The 11-foot bed consists of four fabricated, aftermarket bedsides that were welded together to give the bed the extra length. Most truck campers with floor lengths of 11 feet have a rear overhang, but not Brown Sugar. The entire floor length of the camper is supported by the elongated bedsides that are a good 5 to 6 feet longer than the typical long-bed pickup truck. With the exception of the steel floor, the camper’s frame is constructed entirely of wood overlayed with a classic, ribbed aluminum painted a dark chocolate brown. Even Brown Sugar’s profile is unique and features a sloped and raised top in the center. All told, Brown Sugar weighs only 9,800 pounds, a surprisingly low figure for a full-size truck and an 11-foot camper. 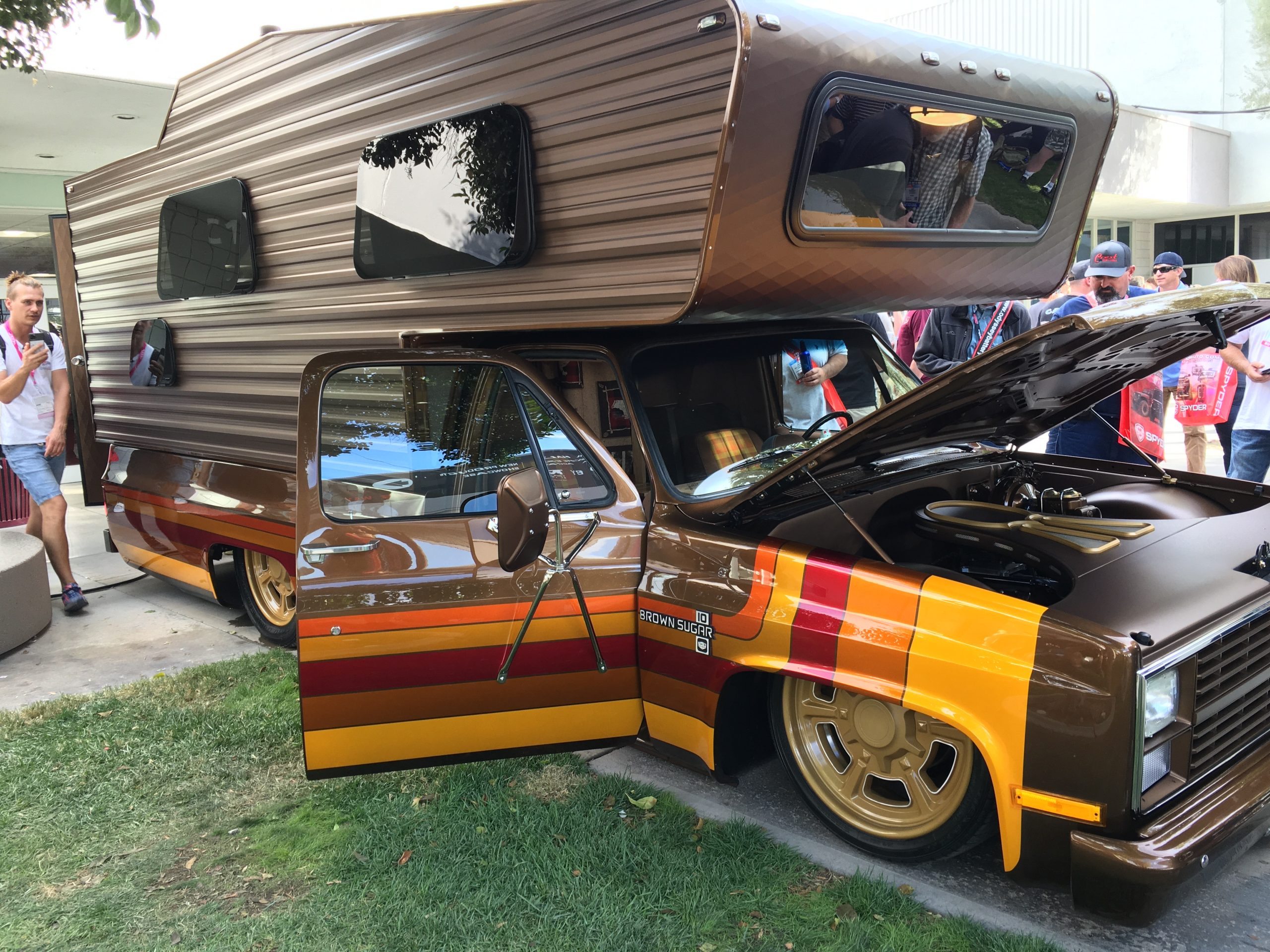 Featuring a classic 1970’s theme, Brown Sugar’s floorplan was designed to not only be functional, but also exhibit normal camper amenities such as a refrigerator, bathroom, kitchen sink, and a pull-out east-west cabover bed. Yet Brown Sugar’s floorplan is unique and features a full-size cab pass through as well as a large bar and lounge. A few off-the-wall features in the retro camper include cedar walls, a custom suede and copped ceiling, a Kicker sound system with eight speakers and two sub-woofers located inside twin whiskey barrels, and a unique wooden block back splash. It also features a sink fashioned from an old Coca-Cola refrigerator. The center part of the bed’s platform lifts up to reveal a flat screen TV for pre-game festivities. The camper also has a city water connection and a 30 amp hookup in the rear bumper allowing the camper to be hooked at any RV park or campground. A 12 volt house battery powers Brown Sugar’s earth-moving sound system.

Aside from the extra long, 11-foot bedsides, the Chevy C10 half-ton pickup got it’s fair share of upgrades. The upholstery in the cab features Dixon Flannel that, along with the brown suede dash, gives the truck a warm and classic look. The engine is a 5.3LS, which came out of a late-model Chevy Silverado 1500, that is mounted to a Black Widow exhaust. The truck’s transmission is a four-speed 4L80 standard. The truck’s engine bay, however, looks much different than OEM with a custom radiator and air intake cover.

Provided courtesy of GSI Suspension, Brown Sugar features a rear four-link suspension with Firestone air bags and a GSI air ride system that are based off of a semi-truck setup. The front suspension, consists of tubular A-arms with a Firestone air bag and GSI air ride setup as well. GSI’s air ride system allows the rig to be raised as high as 8.5 inches or rest entirely on the ground. Brown Sugar’s 22-inch wheels are a custom design from Mike Curtis with Curtis Designs. The design of the alloy wheels were by Delmos. The Tires are Nitto Ridge Grappler LT 285/50R22’s. GSI’s suspension system also features a Watts Link on the rear.

Brown Sugar’s paint job features a 1980’s-style, Desert Fox theme with a modern twist. River City Rods added some candy paint and a bright metallic flake to make it stand out in the crowd. The hockey stick pattern along the sides and across the hood features vibrant yellows, oranges, and reds. The entire paint job was topped off with six layers of clearcoat to make the paint smooth to the touch.

“What we started with was PPG paint” Piggott explained. “PPG has been behind us in all of our builds. The thing we wanted to do was kind of give it a retro look, but we kind of wanted to be earthy with it. We brought it bright colors, but it’s not too much and features striping that goes through the engine bay, through the door jambs, and all along the side of the truck.”

The end result is breathtaking, even for a truck camper rig built for tailgating. Just don’t expect to take this party rig boondocking in the mountains.

“When we built this thing we did it so that we can take it to any show and any place and would have no regrets. You either go all in or not. It has to look as clean on top and bottom and between the aesthetics and how well we do the fabrication it all clicks. If somebody pulls a panel off we want them to be impressed and that it doesn’t look horrible. We want a situation that we can be proud of for the next person taking this thing apart because that’s inevitable, it’s a hot rod. Something will go wrong, things happen. At River City Rods we want to be proud of what we do,” Piggott said. 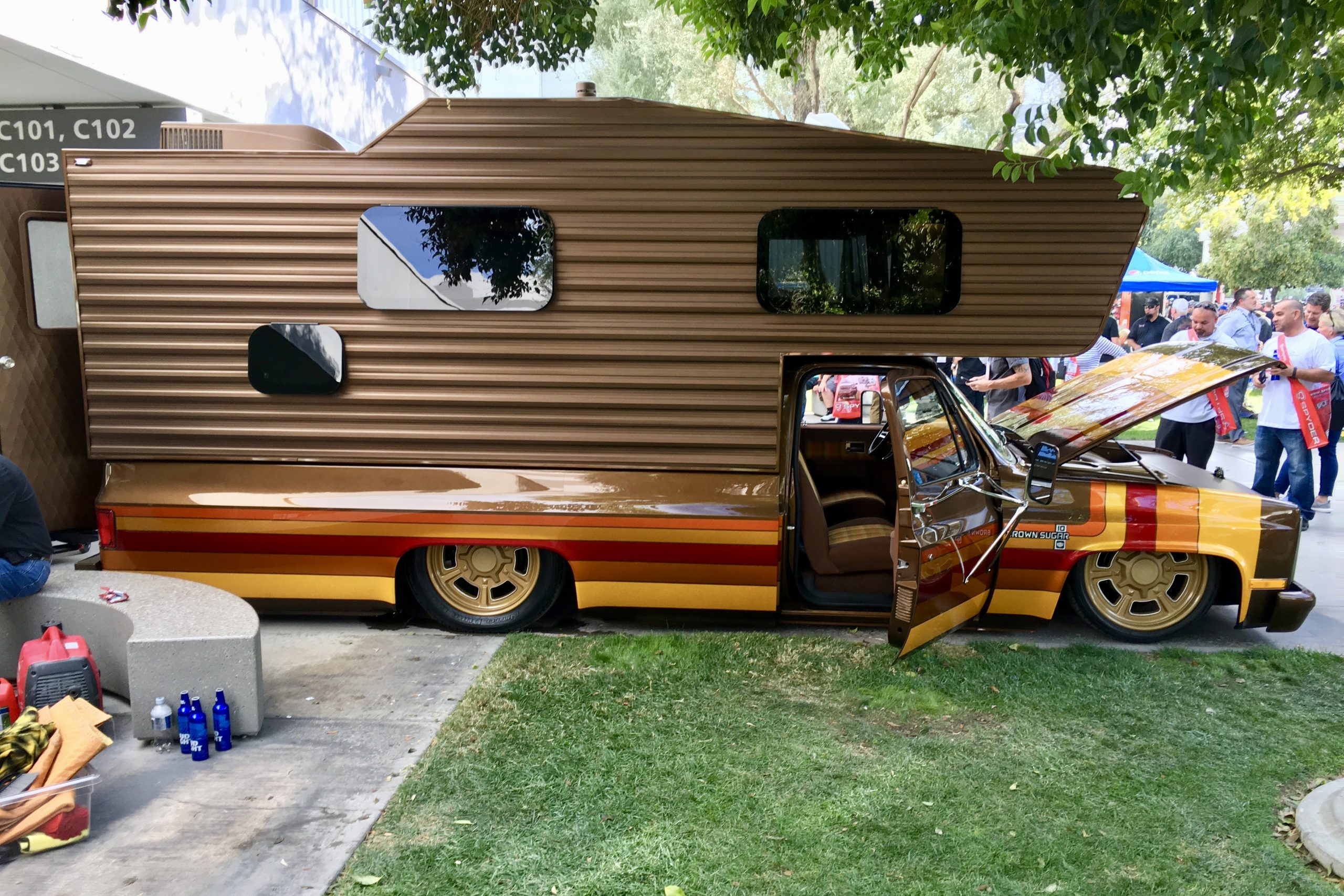 Truck Camper Adventure will be attending the 2016 Specialty Equipment Market Association (SEMA) Show in Las Vegas, NV. This year’s show will be held from Nov. 1-4. SEMA is an annual trade show that brings [read more]