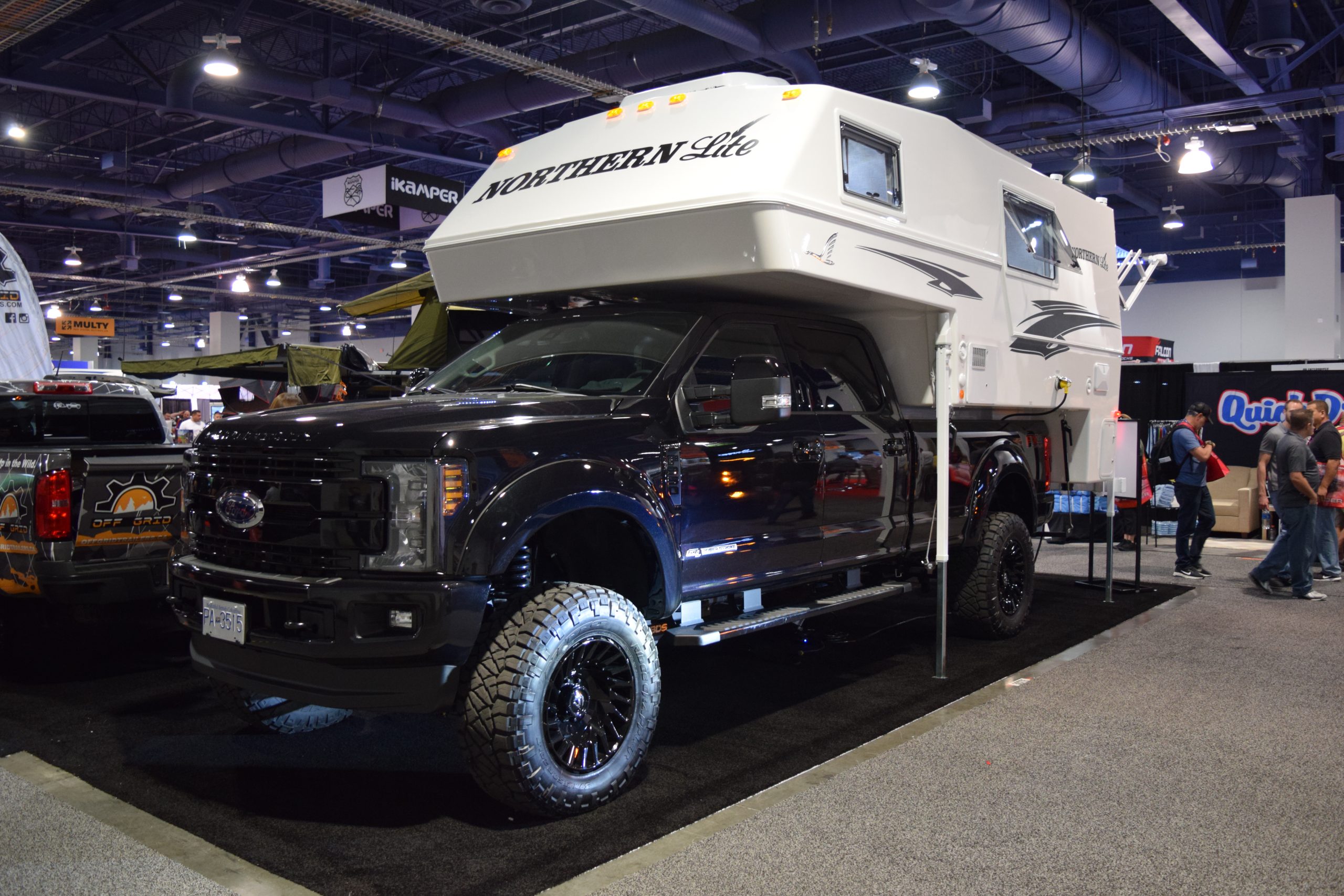 A record number of truck campers and overland rigs were on display at the recently completed 2019 Specialty Equipment Market Association (SEMA) Show in Las Vegas, Nevada. Previous SEMA shows had one, maybe two truck campers, but not at the 2019 show. Truck Camper Adventure counted dozens of overland rigs including a total of seven slide-in and chassis-mounted truck campers made by Lance, Northern Lite, Four Wheel Campers, EarthCruiser, and EarthRoamer. Of all of the truck camper company’s that participated in the massive, aftermarket show, Canadian-based Northern Lite had the largest presence with two impressive rigs built specifically for overlanding.

Northern Lite’s display was part of a larger effort to increase the visibility of the growing overlanding segment at the show. Indeed, for the first time ever, buyers at SEMA were able to see products and vehicles built specifically for overlanding, including an all-new SEMA Overland Experience area. Numerous seminars on the topic including thoughtful Q&As were also part of the program. Trucks and SUV’s with roof-top tents easily outnumbered truck campers in all of the display halls with dozens of impressive builds, but it was still great to see overlanding’s growth in general which included a record number of truck campers. Even a beautiful camper, made by River City Rods of Iowa, mounted on a “low-rider” pickup truck, was prominently featured at the show.

While SEMA focuses primarily on aftermarket parts to enhance the performance of automobiles and trucks, automobile manufacturers like Ford, General Motors, Toyota, and Fiat Chrysler Automobiles also have a major presence with a number of impressive, jaw-dropping builds. The popularity of the show continues to increase with the attendance at this show exceeding 160,000 people from all over the world. Unfortunately, the SEMA Show isn’t open to the general public and is classified as a trade-only event. 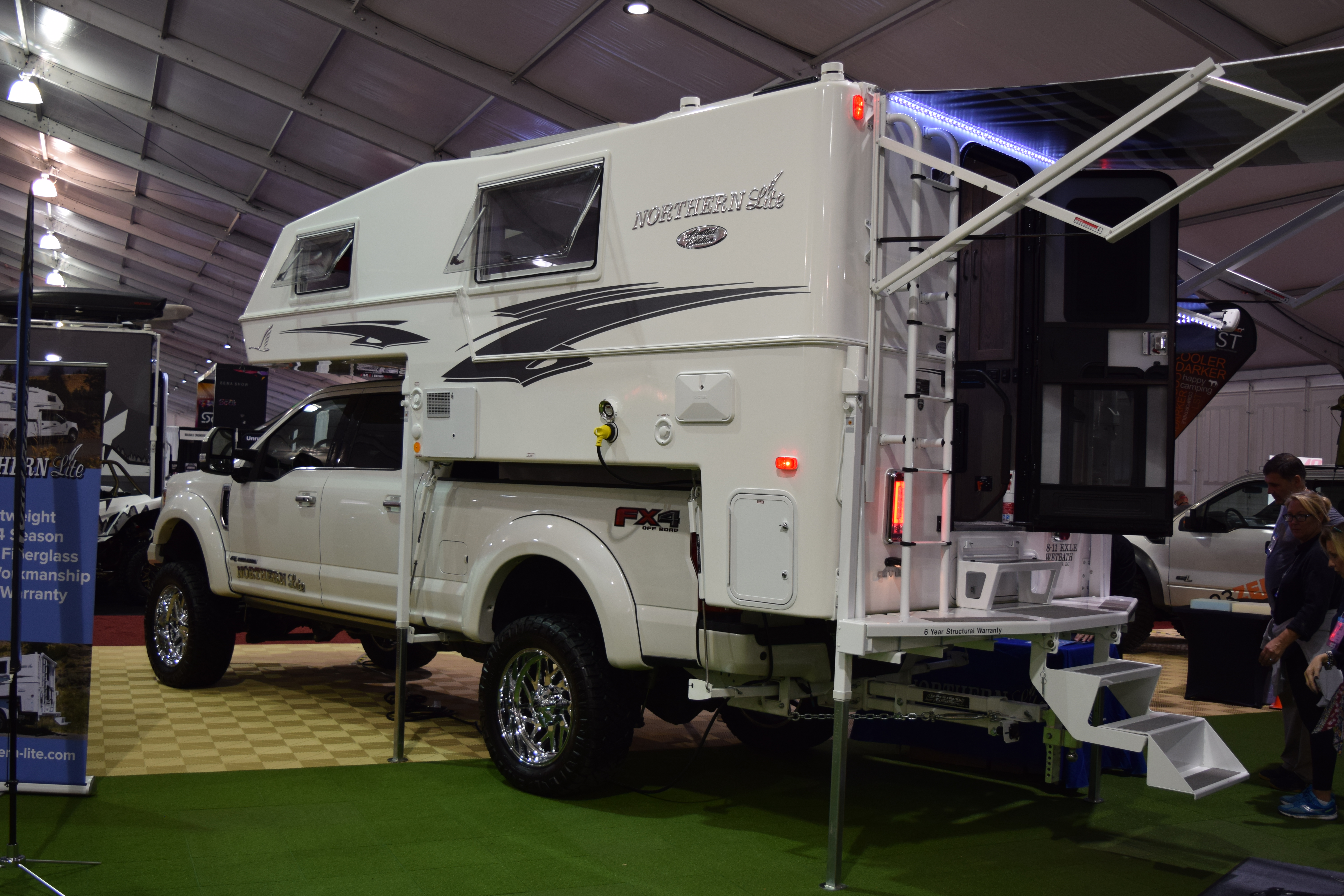 “The show exceeded all our expectations,” said Keith Donkin, General Manager of Northern Lite Campers. “This was the busiest show we have ever been in. We have had people lined up waiting to get in the campers for all four days of the show. We received very positive feedback on our designs and quality. We are already looking forward to SEMA in 2020.”

For the show, Northern Lite unveiled its new leatherette seating called Black Diamond and Graystokes hardwood cabinets and tables. The Black Diamond leatherette combines a bold red and black pattern that is a significant departure from the traditional upholstery patterns found in most RVs, while the new Greystokes finish borrows from the aesthetics popular in many of today’s modern homes. The contemporary gray color not only lightens up the interior in today’s truck campers, but also provides an increased sense of space. Overall, the interiors found in both campers were light and airy, and more importantly, spacious. We were particularly impressed with the molded wet baths. 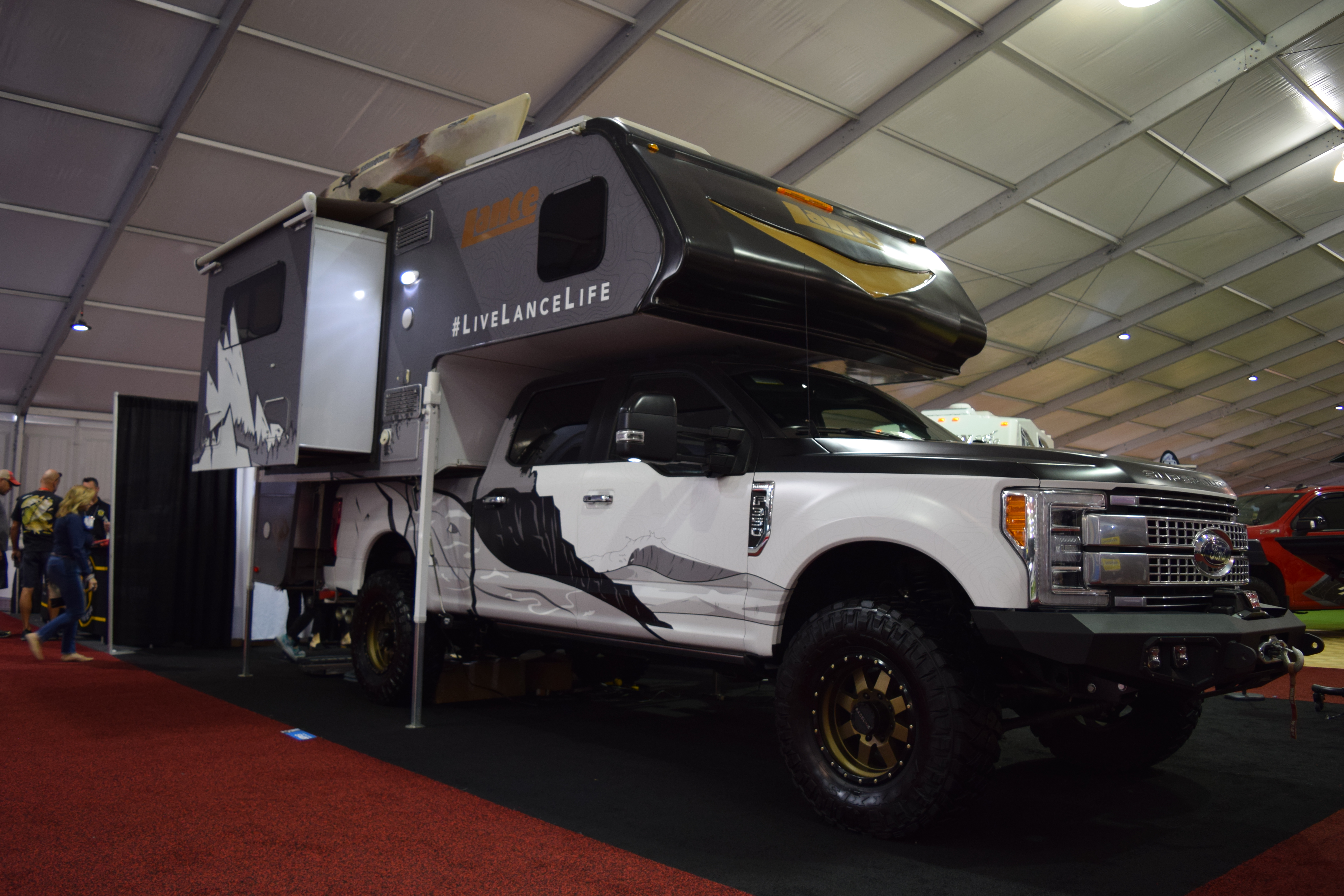 “Our fourth year at SEMA with a Lance truck camper was by far our best yet,” said Rob Rogers, Lance Director of Marketing. “The Lance 855s “Altimeter” and matching Yamaha YXZ combo had a study stream of admirers all week long. With SEMA recognizing the huge rise in popularity of all things Overlanding, with a new “Overlanding Experience” area dedicated to off-road camping and exploration, a product like the Lance 855s now has a home at SEMA.” 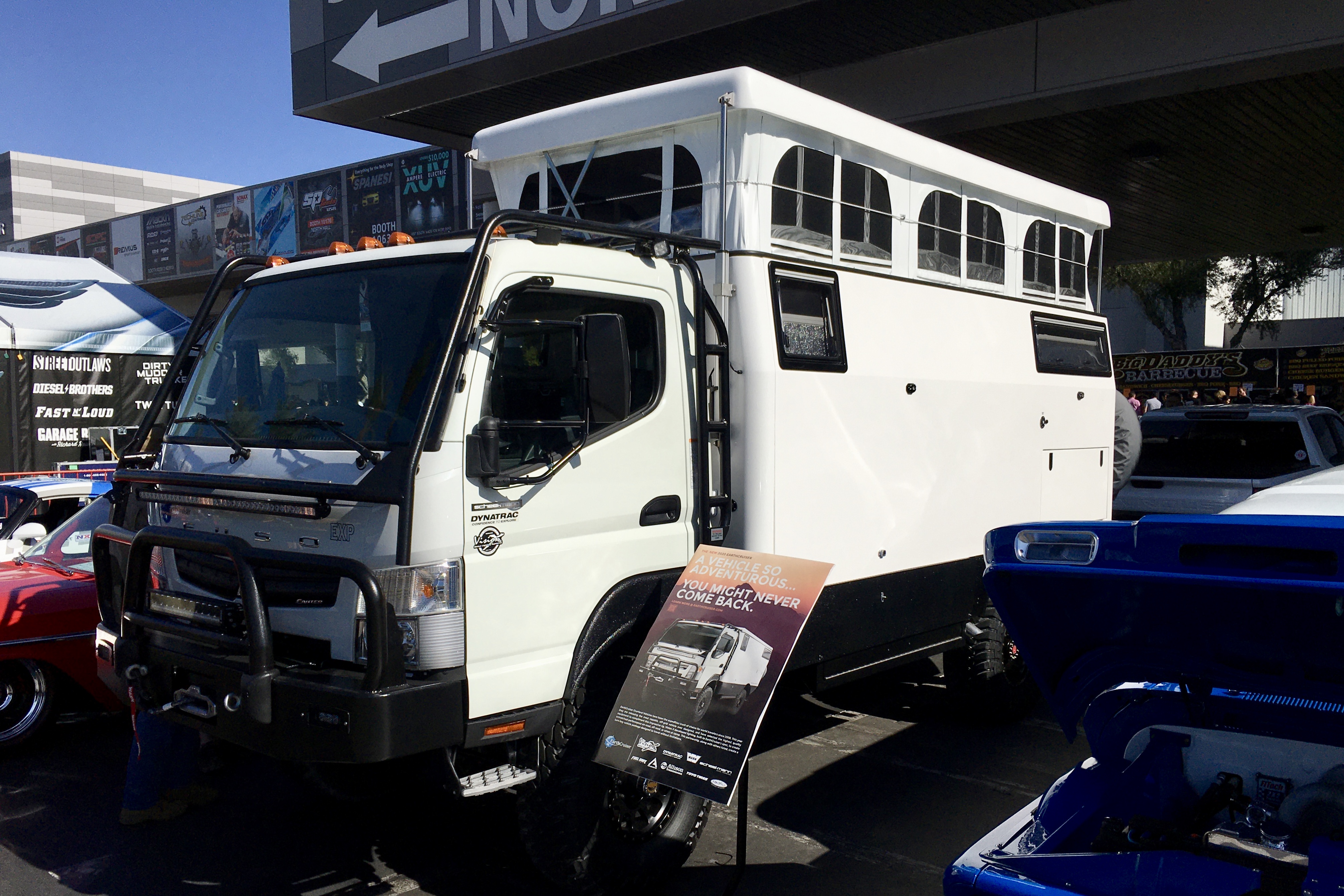 Of all the truck camper rigs featured at 2019 SEMA, none were more prominently displayed than the EarthCruiser EXP. Indeed, the pop-up expedition rig was displayed outside in front of the Las Vegas Convention Center South Hall where nearly all of the show’s 160,000 attendees would see it. In fact, the self-contained rig received a Top 10 Overland Vehicles Award for the show. The award was presented by the Overland Expo team in conjunction with OutdoorX4 Magazine and Road House Marketing.

“It being the largest automotive show in the world, at the largest convention center in the world, you’ll see everything and anything at SEMA,” said Brent Baker, EarthCruiser’s Marketing and Business Development Manager. “Most notably for me was the percentage of off-road vehicles, and more specifically overland vehicles at the show. It couldn’t have been a better place for us to debut the most capable and comfortable EarthCruiser ever built. The response from the crowds and attendees was astonishing, which only cemented all the hard work our crew put into designing and building such a purpose built rig.”

The 2020 EXP features several significant changes. First, the company made the decision to spec out its own gasoline powered drivetrain to give the company full over the final drive ratios, transfer case reduction gears, wheel and tire compatibility, locking differentials, and braking systems. The changes result in the most capable, safest product available, according to EarthCruiser founder, Lance Gillies. The EarthCruiser EXP’s Vortec 6.0L V8 gasoline engine generates an impressive 297 horsepower and 361 foot pounds of torque. This boost in power gives it better on-road and off-road performance compared to its diesel predecessor. EarthCruiser also worked closely with Allison Transmission to develop a program that would optimize power and fuel efficiency. The EarthCruiser EXP boasts 84 gallons of fresh water storage, up to 720 Amp hours of lithium power storage, and up to 800 watts of solar generation. 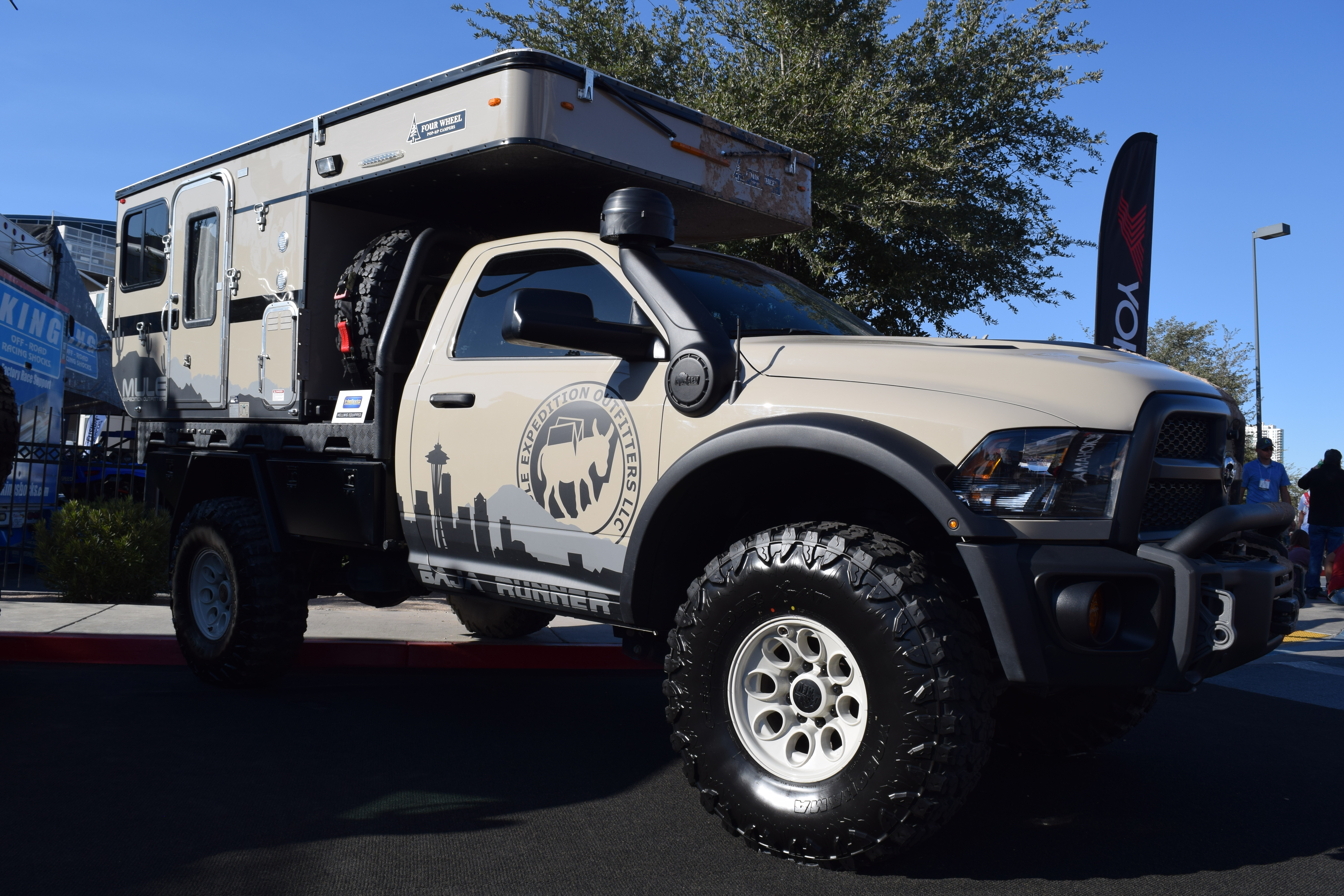 Recently featured here on Truck Camper Adventure, the Baja Runner by Mule Expedition Outfitters turned a lot of heads at the show. Why? Because it’s a terrific looking rig, one of our favorites of 2019, but the good folks at Mule Expedition Outfitters opted to display with rig with both a clean side and a muddy side. We didn’t care for the approach, but some people at the show liked it. Like the EarthCruiser EXP, the Baja Runner received a Top 10 Overland Vehicles Award from the team at Overland Expo. The Baja Runner consists of a Four Wheel Camper Flatbed Hawk mounted on Ram 2500 4×4 chassis outfitted with a Norweld 8-foot aluminum service tray and monster size-40 Yokohama mud-terrain tires. The rig features parts from Factor 55, RedArc, VisionX, Switch Pro, PSC steering, Overland Solar and BattleBorn lithium batteries.

With its narrow girth and angled rear kick back, the Flatbed Hawk is completely at home in the extreme off-road environment. Highlights of this off-road camper include an east-west 72×78-inch bed, a small kitchenette, an Isotherm 1.7 cubic foot three-way refrigerator, and a large dinette in the rear. Popular options include a dual battery box, an indoor shower, an Isotherm 65, 85, or 130 liter DC compressor refrigerator, several exterior color choices, and an excellent 320 watt solar power option to extend your time off-grid. The camper is only 59 inches high with the pop-up down, weighs a paltry 1,325 pounds dry, and only 2,100 pounds fully loaded.

The single-cab Ram 2500 features Nitro Gears 5.13 gear ratio and ARB air lockers front and rear; American Expedition Vehicle (AEV) high mark Prospector XL fender flares, front bumper, snorkel, and 3-inch lift paired with ADS Racing shocks which were custom valved for the build. For additional support and leveling at camp, the truck is also equipped with a set of FireStone 5,000-pound air bags with built-in bump stops. The airbags are detached from the rear axle via DayStar airbag cradles. This set up allows the rear axle to articulate without putting unnecessary stress on the air bags. The AEV prospector front bumper houses a Comeup Seal Gen2 16.5K winch while the rear of the vehicle was fitted with a smaller, Comeup Seal Gen2 12.5K winch. 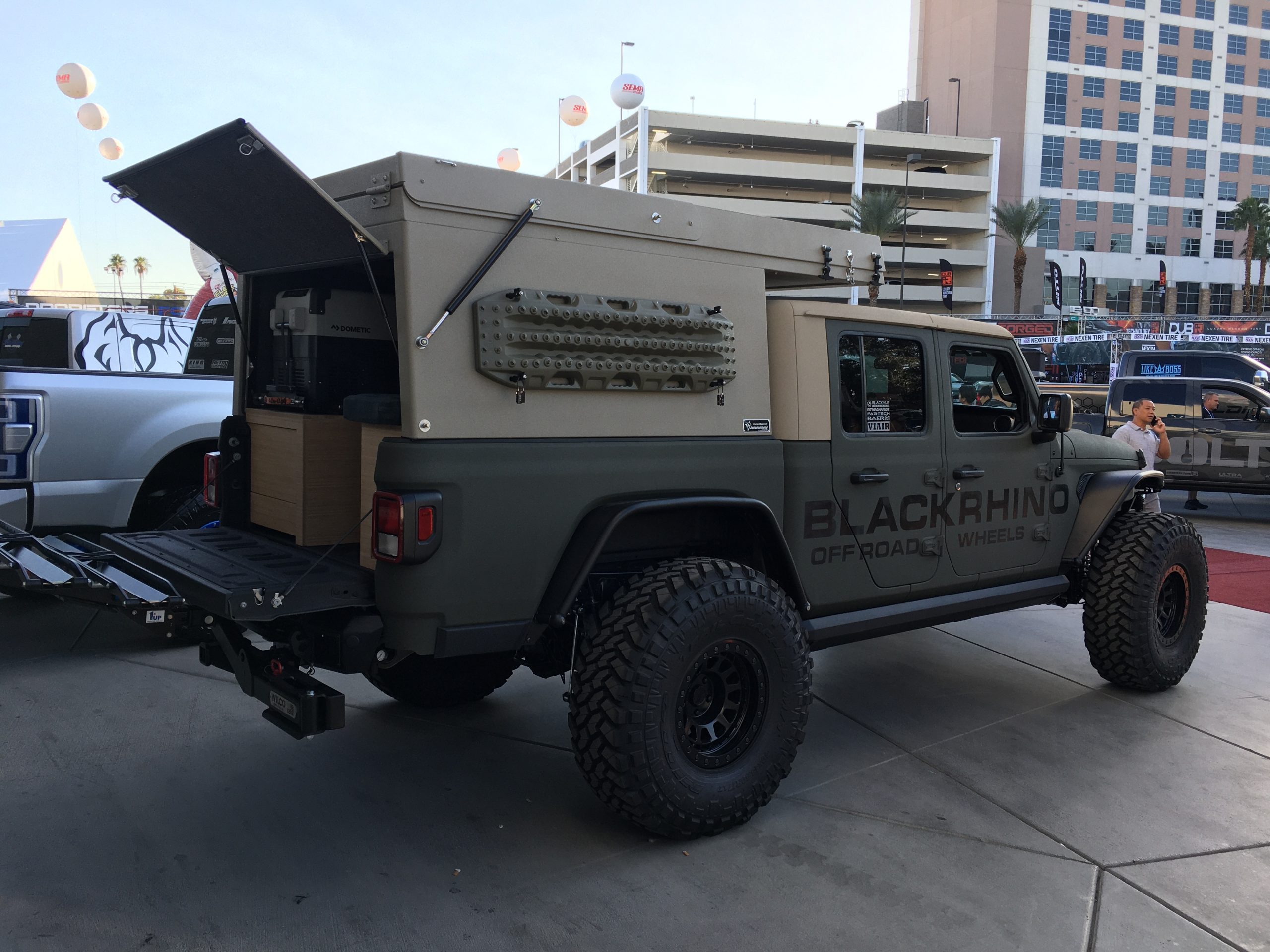 One of our favorites at the show, this drool-worthy rig consists of a 2020 Jeep Gladiator pickup truck with an AT Overland Habitat mounted on top (the original concept called for an AT Overland Summit). Surprisingly, this rig wasn’t recognized with a Top 10 Overland Vehicles Award, a major oversight in our opinion. The Gladiator sports a tank green Kevlar coating, size-40 Nitto Trail Grappler mud-terrain tires, size-17 Black Rhino Beadlock Off-Road Wheels, Bear Brakes, a MagnaFlow exhaust, Metal Cloak Fender Flares, a VIAIR air compressor, and a Go Rhino front bumper outfitted with a Warn Zeon 10.5k winch. For camping, the bed of the truck is equipped with aluminum-framed storage cabinets and seats, rear pull-out drawers, a dual induction cooktop, and a 12 volt Dometic compressor refrigerator. The only thing missing from this military-inspired, Kevlar coated beast is a 50-caliber machine gun mounted on top.

The AT Overland Habitat bridges the gap between the traditional truck topper and a slide-in truck camper. The fold-out tent can easily be deployed by one person and allows for full standup room in the bed of the truck. The cantilever sleeping platform, supported by stout 6061 aluminum rods, features a comfortable dense foam mattress that supports up to 600 pounds. Weighing in at just 340 pounds, the Habitat is available for both full and mid-size pickup trucks like the Toyota Tacoma and Jeep Gladiator. While this isn’t a “truck camper” in the truest sense of the word, it still provides one with an excellent idea of what one would look like on a Jeep Gladiator. We’re still hoping to see a traditional FWC slide-in for the Gladiator which we think will eventually be produced as the numbers and demand increases over time. 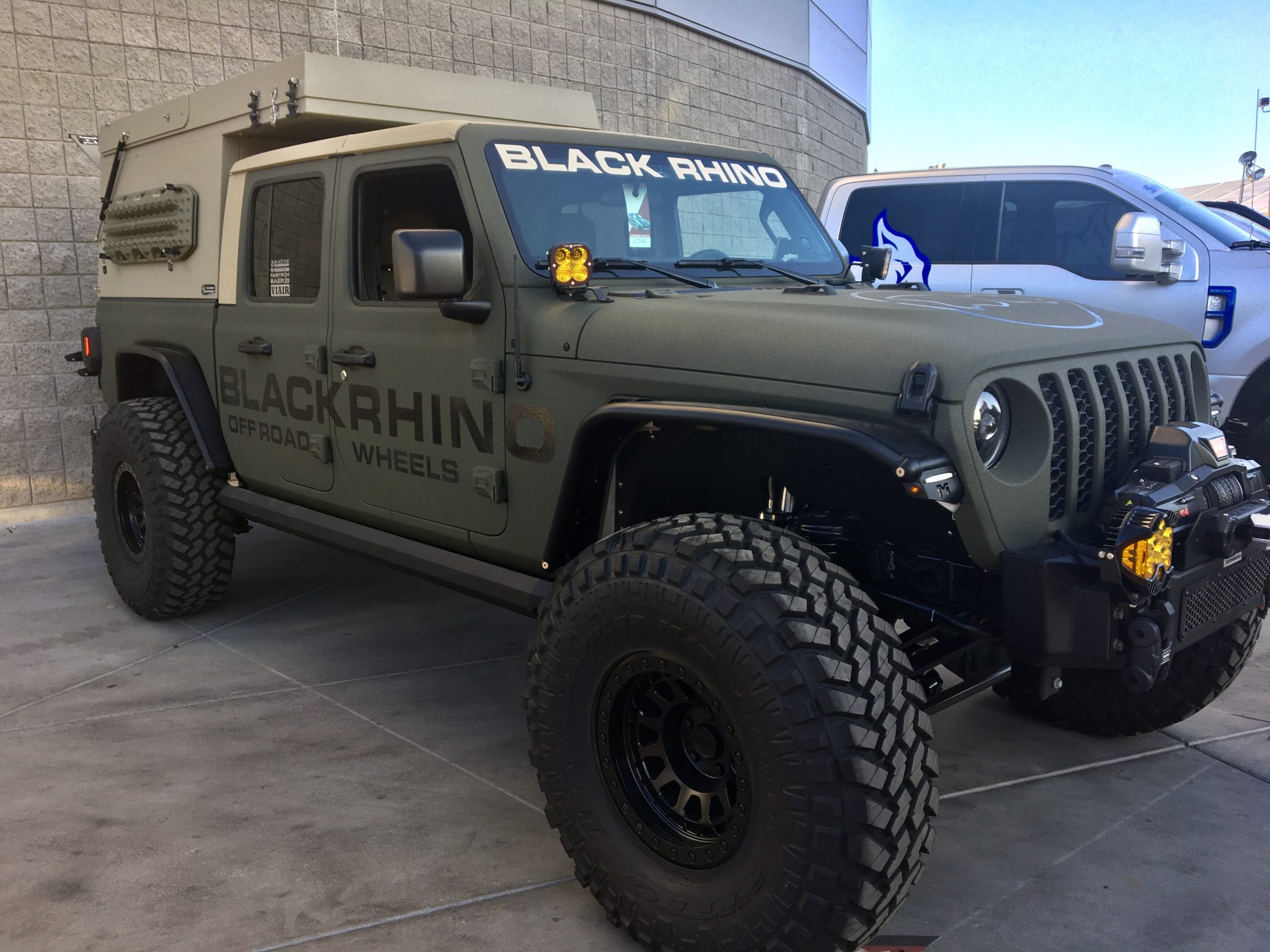 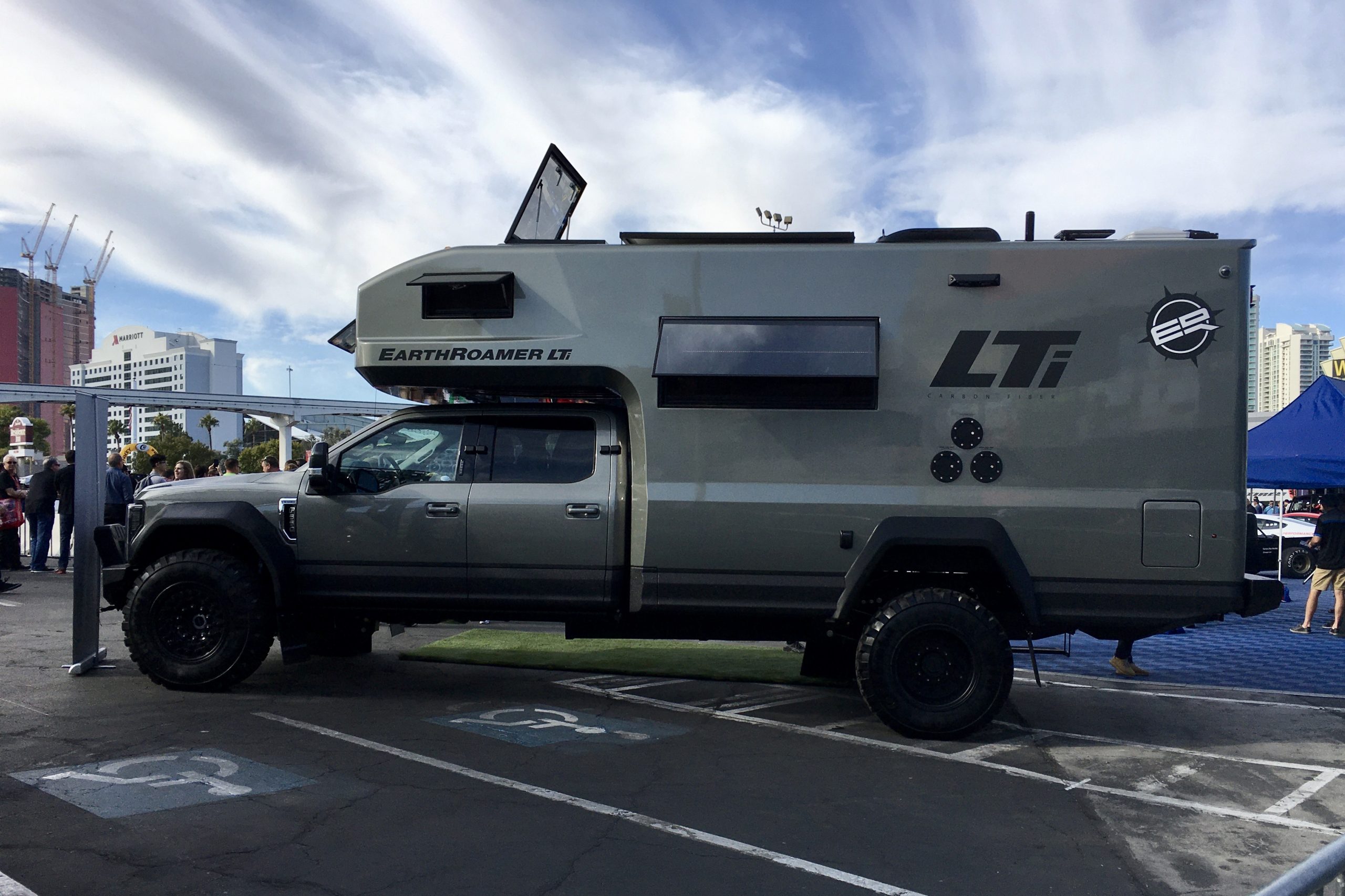 This was the first time we had a chance to see the new Earthroamer LTi in person. To say we were impressed would be an understatement. What makes this Earthroamer different from the more established Earthroamer LTS model? First, all LTi bodies are produced using a Vacuum Infusion Process (VIP) to create and bond two carbon fiber skins to a structural foam core. This process results in a monocoque carbon fiber body that is much stronger and lighter than any traditional RV or overland camper body in existence. But that’s not all. The EarthRoamer LTi incorporates other changes including lithium batteries, bunk side windows, and a raised ceiling height, all built on the standard Ford F-550 chassis with size-41 tires that the EarthRoamer is known for.

Capacities for this impressive, eye-popping rig include 95 gallons of diesel, 100 gallons of fresh water, 60 gallons of grey water, a 1,320 watts solar power, and a massive, 11,000 watt hour lithium battery bank. Like the Earthroamer LTS, the cost of the Earthroamer LTi is problematic with a price tag well over $600,000. Ouch! 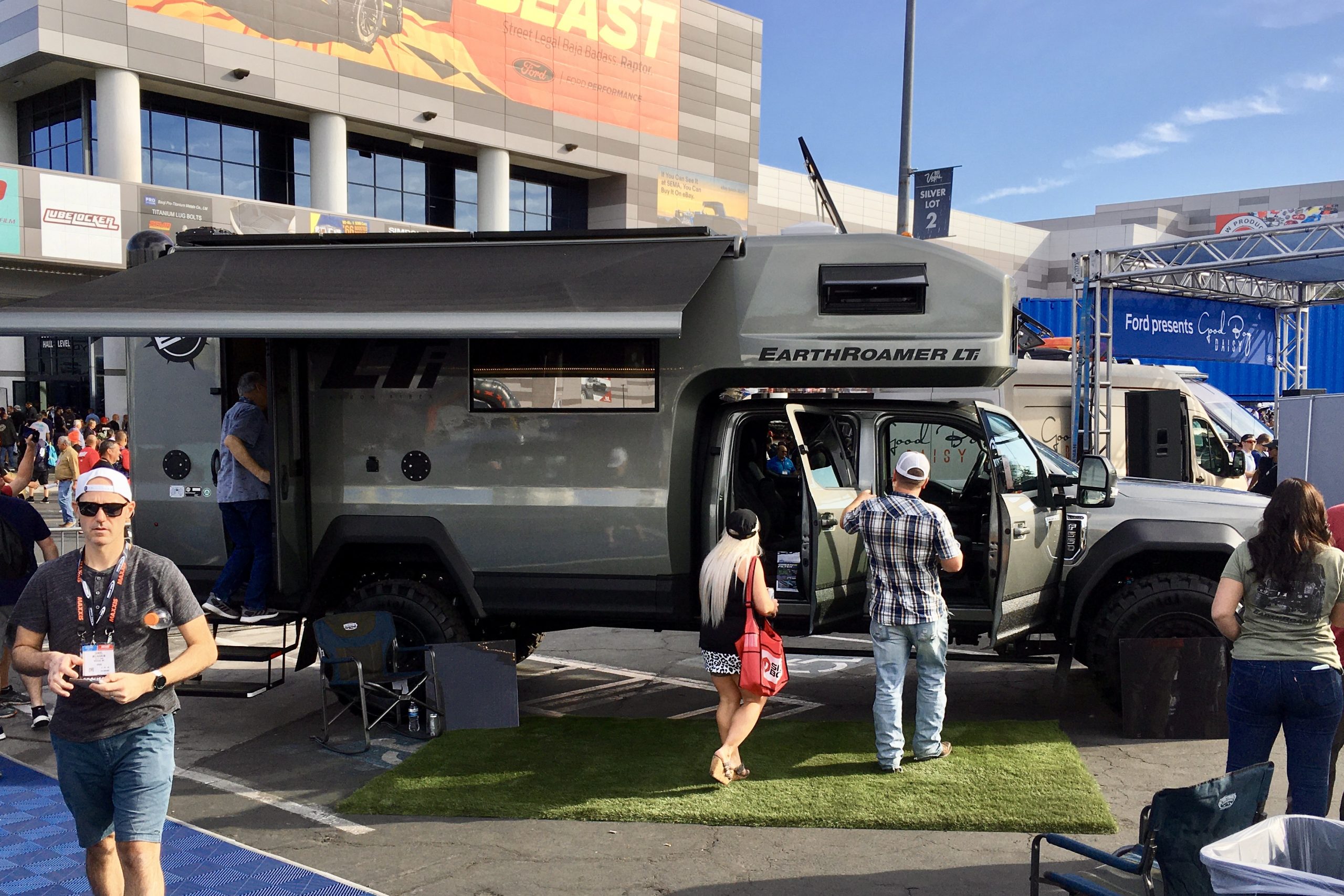 One thing readily apparent to anyone on social media is the growing popularity of truck campers. Skyrocketing sales nationwide provide ample evidence of this fact. Fortunately, when it comes to truck campers, consumers have a [read more]

Review of the Wrappon Green Tear and Seal Toilet

Having a way to “do” your business conveniently is a must for anyone who enjoys truck camping. Indeed, truck camper manufacturers have gone out of their way to design campers with adequate bathroom facilities without [read more]