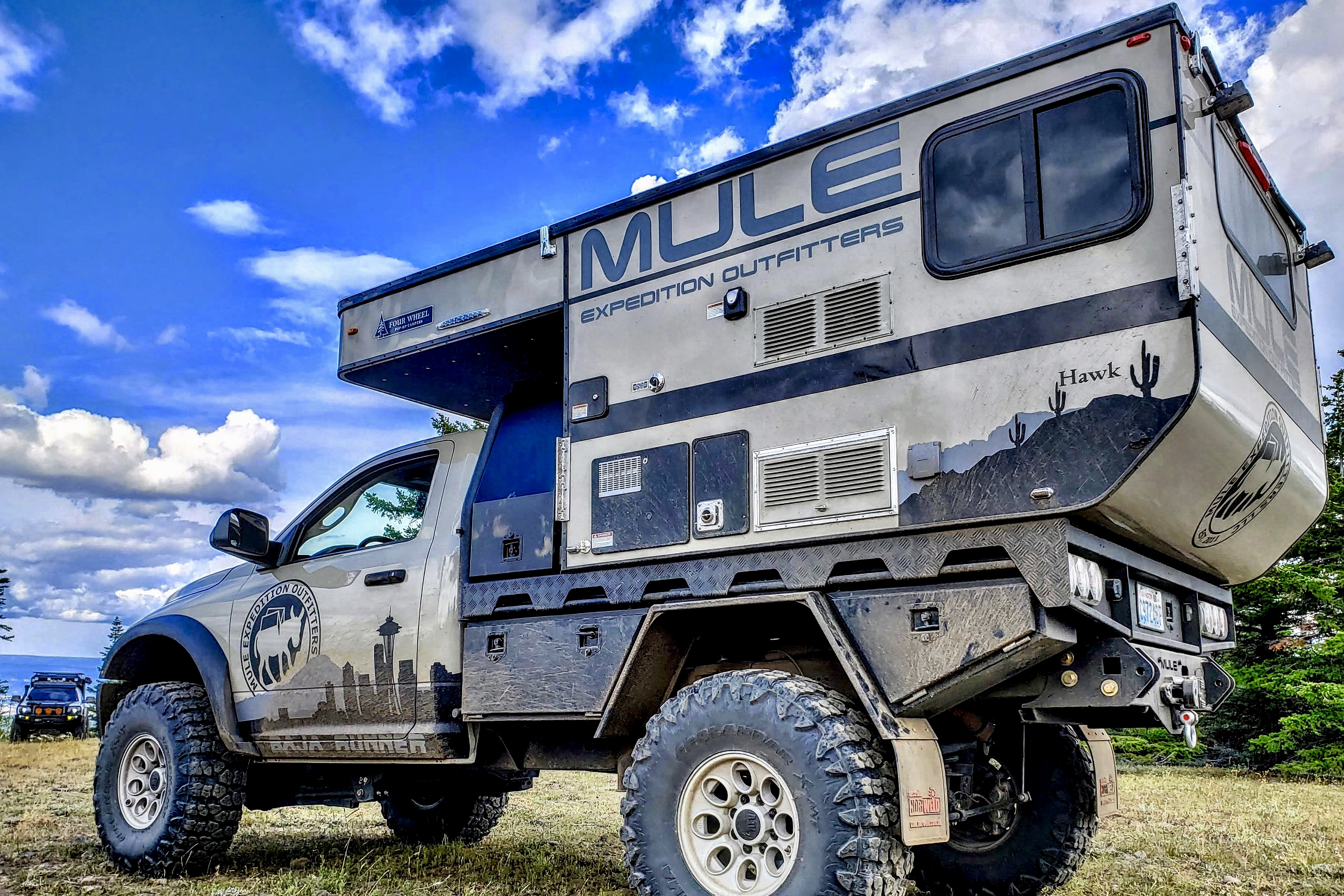 Looking for some inspiration on how to build a great overland truck camper rig? Then look no further. The good folks at Mule Expedition Outfitters have built what has become one of the top rigs of 2019, the Baja Runner Four Wheel Camper Hawk. We first saw the Baja Runner at the 2019 NW Overland Rally and was very impressed with it. Many showcase rigs like this tend to be all fluff and no substance, but not this one. The Baja Runner not only looks great, but is very functional. Indeed, the overland company has plans to take this rig to Baja, Mexico soon. To learn more about the rig and how it was built, we spoke with Dana Marshall of Mule Expedition Outfitters.

TCA: Thanks, Dana, for taking the time to talk with us about the Baja Runner. What inspired you to build such a great-looking rig?

Dana: We try to do a feature-build every year for the Northwest Overland Rally and having just brought on the Four Wheel Camper product line in 2018, it seemed like a good time to do a build with one of the campers. We’re also an AEV (American Expedition Vehicles) dealer and a Norweld USA dealer, so the choice of the RAM 2500 was an easy one that would allow us to display those components as well.

The inspiration for the truck came from our love of exploring the backcountry of North America all the way from British Columbia to the Tip of the Baja Peninsula. We wanted to push the limits of off road capability and creature comforts. The RAM 2500 platform seemed like a good place to start. The regular cab long bed RAM 2500 has a relatively compact wheel base (compared to the crew cab) and with extensive aftermarket support from companies like American Expedition Vehicles, ADS and Norweld we knew we had the ingredients for an epic build that using primarily off the shelf parts. The Creature comforts was left up the folks at Four Wheel Campers. The Hawk Ute pop-up camper provided all the amenities of a small house while maintaining a lower overall weight and center of gravity two things beneficial for unimproved roads and trials.

TCA: Was this rig built completely in your shop?

Dana: With the exception of the paint and graphics, yes. We install all the products we sell and have a great team of guys. We stripped the truck down and had the cab color matched to the Khaki color smooth aluminum siding offered by Four Wheel Campers. The actual painting of the cab was outsourced. We also outsourced the vinyl graphics, although all graphic design work was done in house. The entire build was brought to life virtually with help from Adam Tolman at Box Rocket Designs. Adam completed a full rendering of the truck prior to starting the build. This was done to both encourage inspire sponsors and to give the build team a clear vision for the completed vehicle.

TCA: Did you partner with any other companies for this build?

TCA: What options is the FWC Flatbed Hawk equipped with?

TCA: Who manufactured the service tray? What features does the tray have?

Dana: The tray is a full-size 8-foot deluxe flatbed made by Norweld of Australia. Norweld Flatbeds and Canopies are known to be among the best in the market. These flatbeds offer a fully tig-welded design along with styling new to the U.S. market. The construction is extremely robust and designed to handle the rigors of extended off pavement driving. Some of the features include front and aft wheel well storage boxes, a 43L under tray water tank and a 48-inch long rear storage drawer sitting on 500-pound slides. The flatbed and Tunnel box are both works of art.

TCA: How much does the entire rig weigh?

Dana: We haven’t gotten it on the scales yet, but stock weight on this truck is about 6,800 pounds, so we’d guess it’s close to 9,200 pounds with the addition of the flatbed, tunnel box, 40-inch tires, suspension upgrades and camper.

TCA: Can you tell us about the truck?

Dana: The truck is a 2016 RAM 2500 6.4L Gas Hemi engine Tradesman. We purchased it used with about 30,000 miles on it. In retrospect, we might have upgraded a little to at least get power windows and door locks, BUT, since we knew we were going to essentially tear the truck down and rebuild it, we didn’t want to spend a lot for the options offered with the more expensive models. 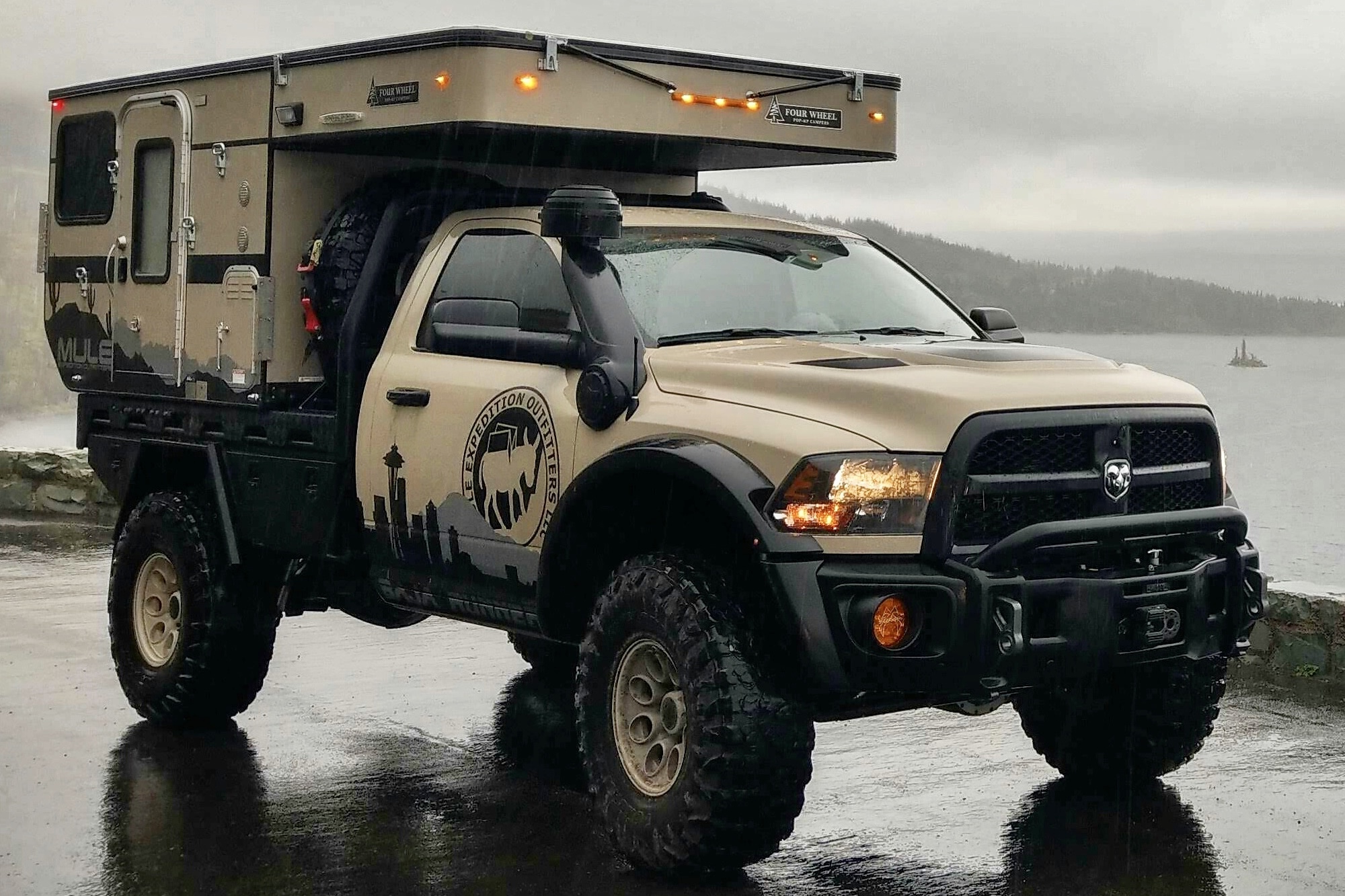 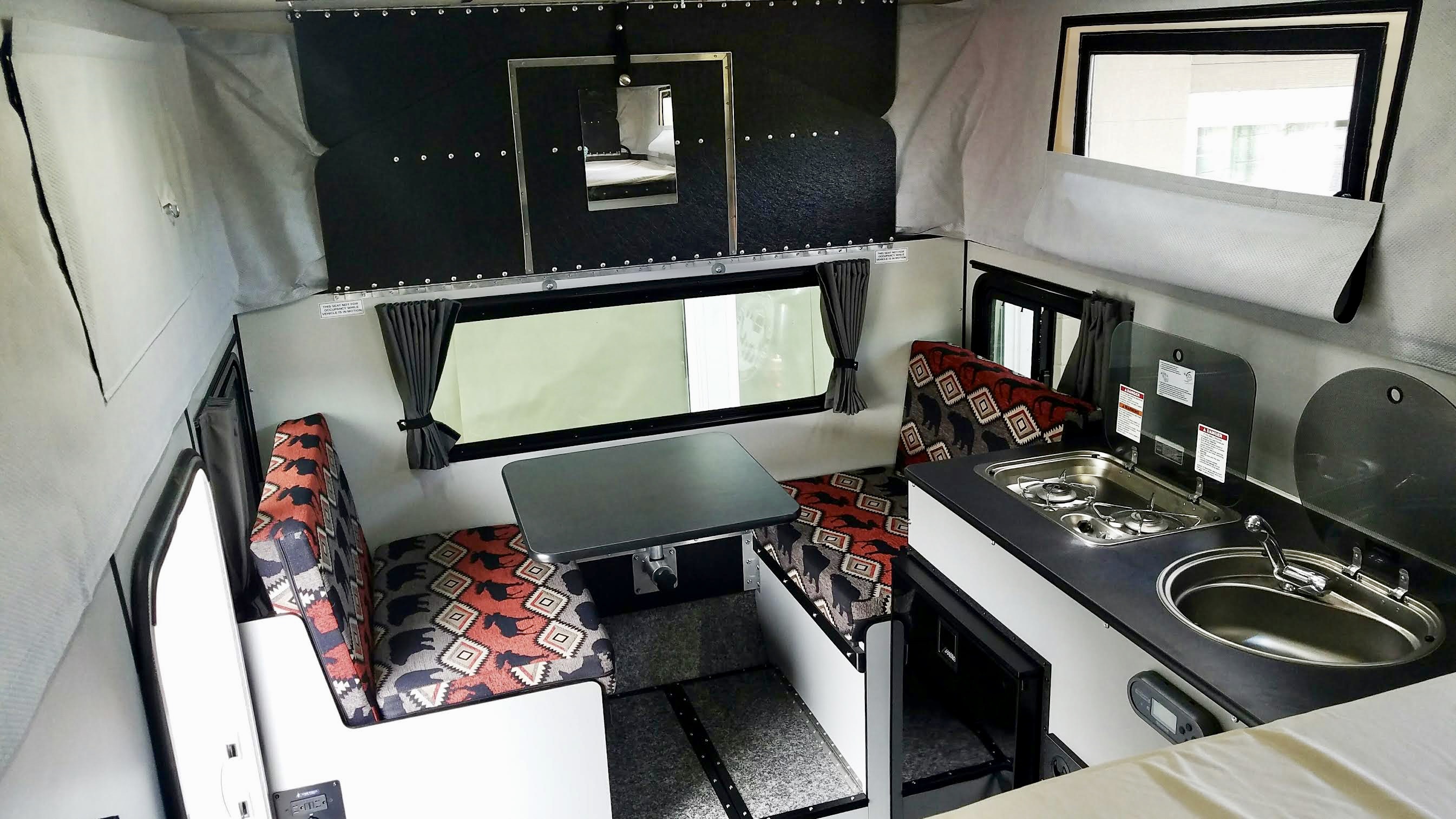 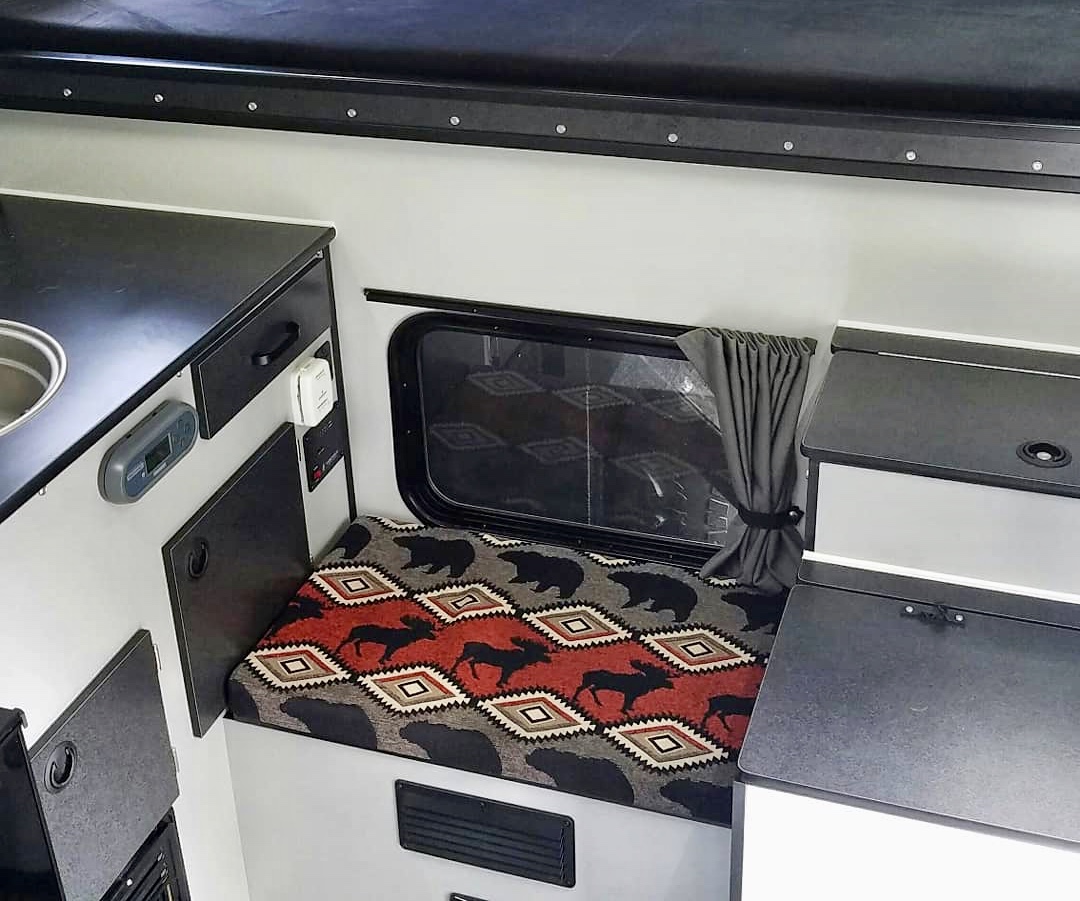 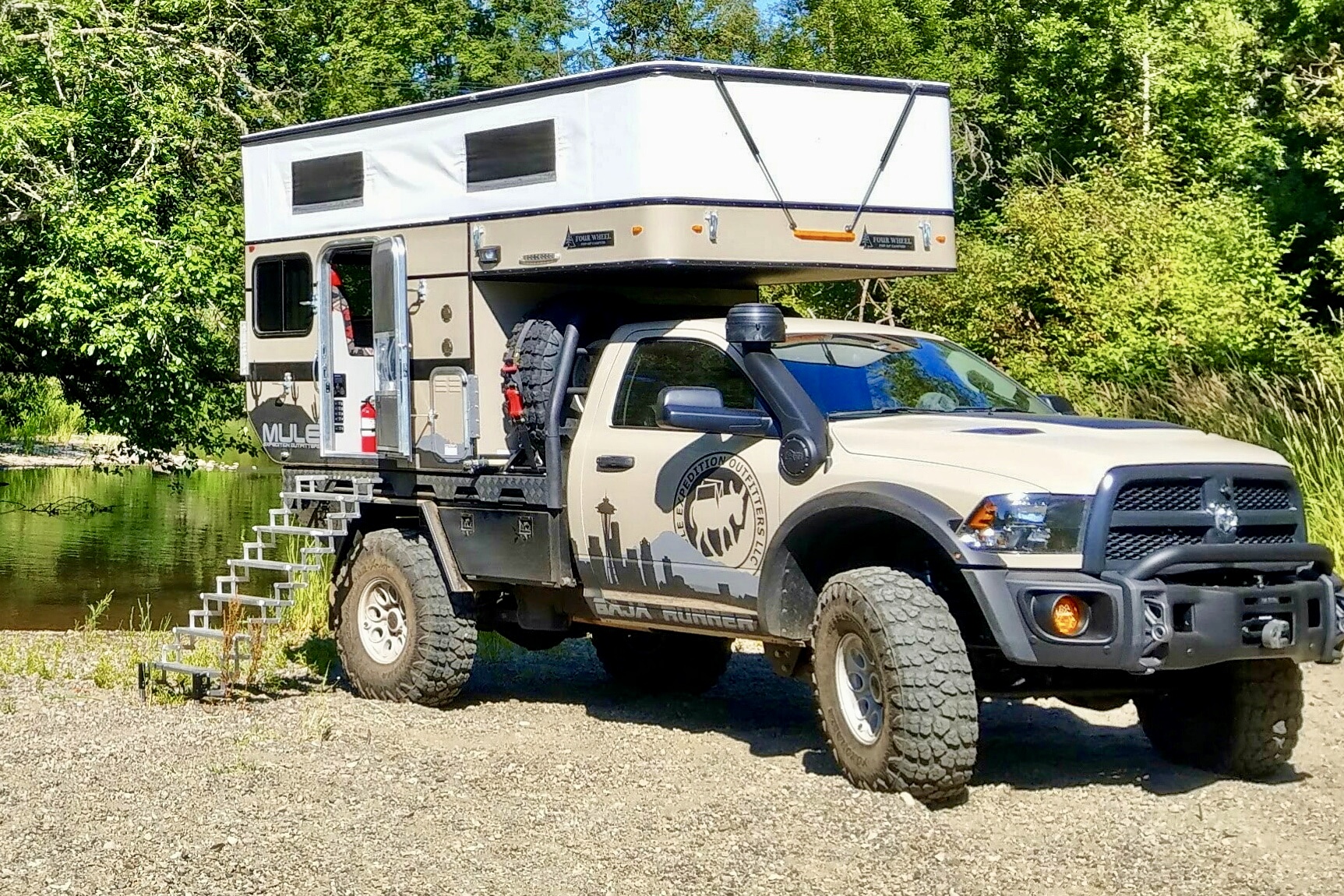 TCA: What mods were made to the truck?

Dana: The truck build features Nitro Gears 5.13 gear ratio and ARB air lockers front and rear; AEV high mark Prospector XL fender flares, front bumper, snorkel, and 3-inch lift paired with ADS Racing shocks which were custom valved for the build. For additional support and leveling at camp we also included a set of FireStone 5,000-pound air bags with built-in bump stops. The airbags are detached from the rear axle via DayStar airbag cradles. This set up allows the rear axle to articulate without putting unnecessary stress on the air bags.

The AEV prospector front bumper houses a Comeup Seal Gen2 16.5K winch while the rear of the vehicle was fitted with a custom winch mount that also serves the rear support for the Norweld flatbed. The rear winch is a COME UP Seal Gen2 12.5K.  Both winches feature Comeup’s patented cone brake system, wireless remotes, IP68 rating and synthetic line.

A Switch Pro 9100 control system was installed to control all the accessories including lights, lockers and ARB air compressor and custom airbag control unit.

The upholstery in the truck recovered in Katzkin leather and the Tradesman dash was fitted with a 10-inch Android based touch screen which handles climate control, Navigation, phone, Radio, and front and rear cameras.

TCA: What is the matching color of the truck and camper?

TCA: We love the wheels and tires. Can you tell us more about them?

Dana: The Wheels are color matched AEV Katla 17×10 alloys specifically designed for 40-inch Tires. The tires are the all new 40-inch Yokohama XMT’s (Extreme Mud-Terrain) which, even though they are a mud-terrain, are surprisingly quiet on the road and handle extremely well at highway speeds. We were absolutely floored by the ride quality and low noise values these extremely chunky tires provide.

TCA: So have you taken this rig to Baja yet?

Dana: No! (sadly). We have plans for a trip with a few folks from Four Wheel Campers Spring 2020.

TCA: Where have you taken this rig off-road so far?

Dana: Primarily around Washington State and up into British Columbia. It has done sections of the Washington Back Country Discovery Route as well as a week-long trip to Glacier National park.

TCA: Your Instagram feed mentioned that this rig will be displayed at the 2019 SEMA show. Will it be displayed in the new Overland Experience area in the Performance Pavilion?

Dana: No. The truck will be on display in the Yokohama Tire booth in the South Hall.

TCA: Are any other shows planned for this rig like the Overland Expo West next May?

Dana: People can see this rig at the Pacific Northwest Sportsman’s Show in Portland in Feb 2020 and at Overland Expo West in 2020. It is also typically parked at our showroom in Issaquah, Washington.

TCA: If somebody wanted to order this camper from Mule Expedition Outfitters, what would it cost?

Dana: Customers provide us the truck and that comes down to personal preference on options and trim packages. Ultimately for a build like this with a flatbed camper, a full size truck with a healthy payload is required. The flatbed Four Wheel Campers start at $29,000 but most of the ones we sell end up around $40,000 once they are equipped with the features most customers want and the Norweld Trays run about $9,000. From there it really depends how much a customer wanted to build out the truck itself. The suspension upgrades, bumpers, winches, etc are not required… but for those who go off-road and want to be self-sufficient we recommend them.

All in if I had to give a number for the total package, a customer would be looking at about $85K plus the cost of the truck—still way cheaper than a built-out Sprinter van and way more capable. And, in our opinion, cooler. 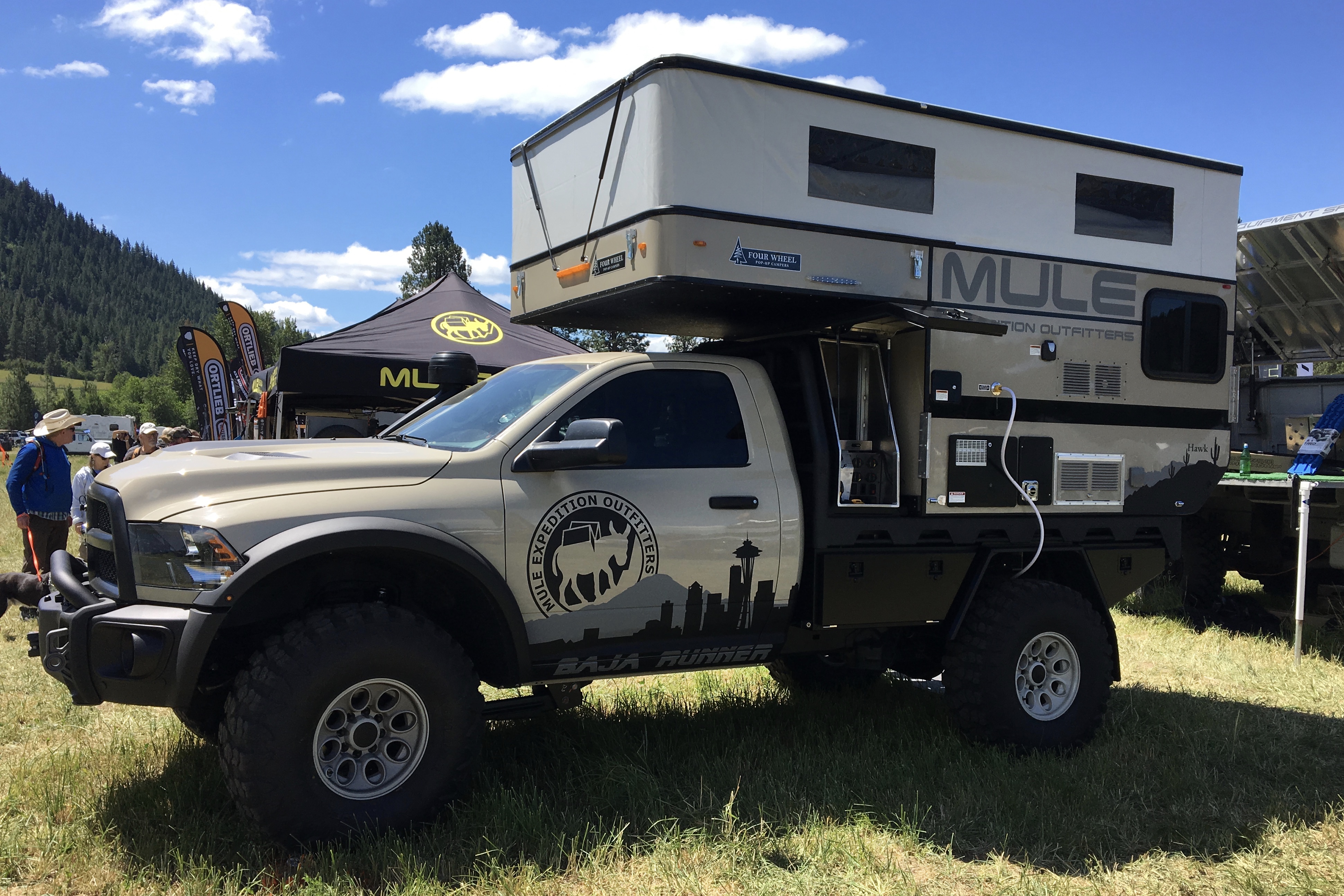 About Mello Mike 635 Articles
Mello Mike is an Arizona native, author, and the founder of Truck Camper Adventure. He's been RV'ing since 2002, is a certified RVIA Level 1 RV Technician, and has restored several Airstream travel trailers. A communications expert, he retired from the U.S. Navy in 2004 as a CWO3 after 24 years, worked in project management, and now runs Truck Camper Adventure full-time. He also does some RV consulting, repairs, and inspections on the side. He currently rolls in a 2013 Ram 3500 with a 2021 Bundutec Roadrunner truck camper mounted on top.
Website Instagram YouTube

In the Spotlight: The New EarthCruiser EXD Expedition Camper

Oregon-based EarthCruiser has been on a tear lately with several new offerings. Last year the company released its first slide-in truck camper called the GZL, a high-end, pop-up for mid-size and full-size trucks, and this [read more]