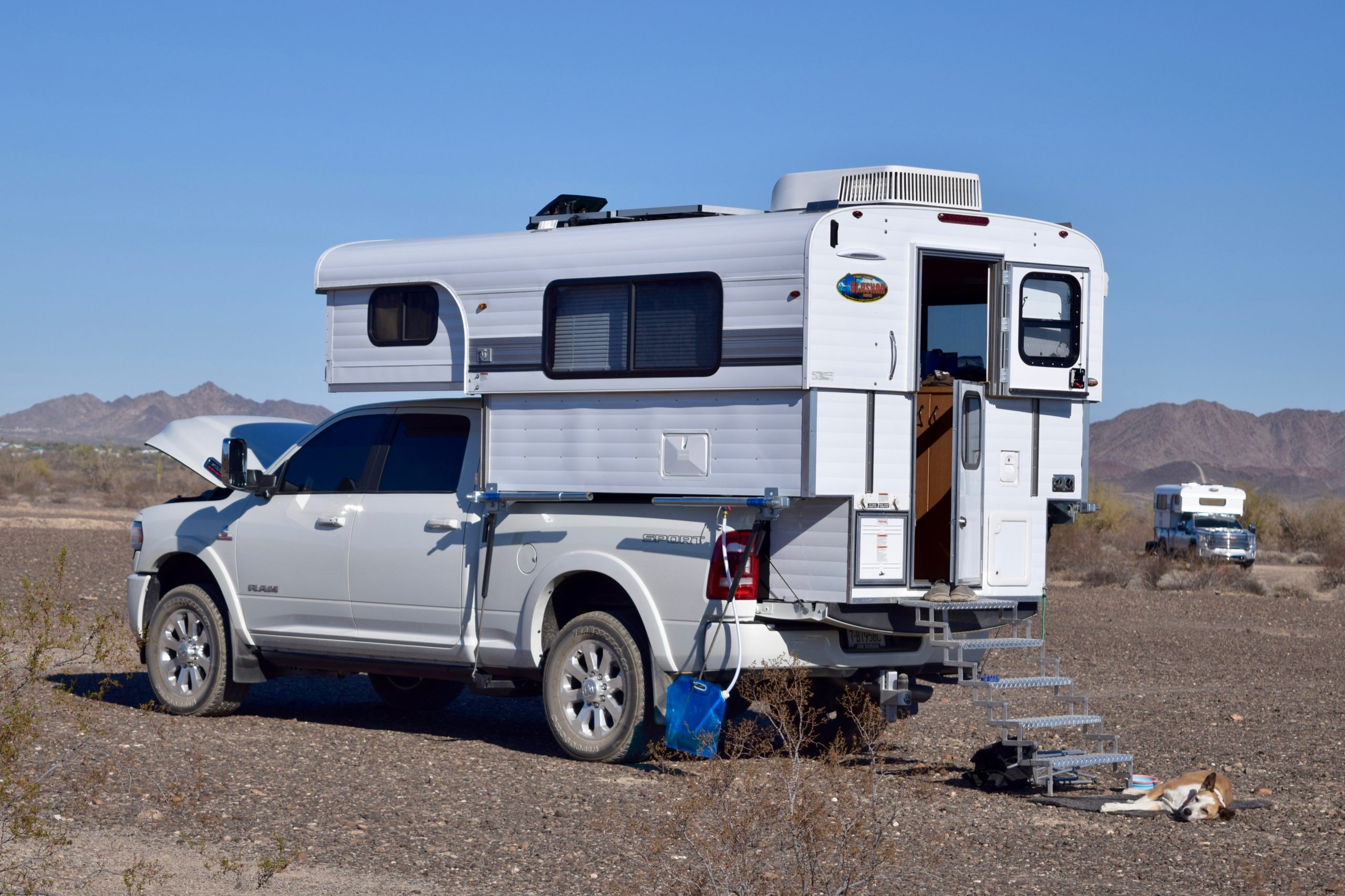 Fortunately, engineers at Ford, GM, and FCA have been hard at work when it comes to raising the payload of today’s 3/4-ton trucks. Each year brings new claims on having the highest in-class payload. How is a truck’s payload rating determined? By subtracting the curb weight of the truck from its gross vehicle weight rating (GVWR), which for today’s 3/4-ton truck ranges anywhere between 8,565 to 10,650 pounds. When it comes to payload, more is better. A difference of 300 to 400 pounds in payload may not seem like much, but when it comes to hauling a truck camper, that difference can be huge. A heavier camper means more amenities.

When it comes to payload, options can either hurt or help the truck’s rating. As a truck camper owner, you should always opt for the “maximum payload” or “max tow package” as this maximizes payload. As for other options, however, choose carefully. Yes, having a diesel engine is great for climbing mountains and raising your testosterone, but it’s also heavier, nearly twice as much as a gasoline V8. This means less payload—not to mention more emission hassles—for you. Ditto for 4WD. That feature, while great for driving on rough roads, sand, and snow, isn’t so great for your payload rating—the typical 4WD drivetrain weighs 300 to 400 pounds more that the 2WD version (we were, however, pleasantly surprised to discover that Chevy and GMC both offer 4WD with a corresponding increase in GVWR). The same applies to cab size. A crew cab outweighs a standard cab by roughly 400 pounds. For a 3/4-ton truck, that increase in weight is huge.

Case in point. My nephew met us at the recent Truck Camper Adventure Rally in his brand-new 2022 Ram 2500 pickup. Rightfully, he was thrilled with his new ride and was anxious to show it to us. One of the first questions he asked was what kind of truck camper he could get to haul on it. When I asked him for his payload rating he didn’t know it. When I showed him the Tire and Loading (Payload) sticker on his door jamb he was horrified to learn that the payload rating of his brand-new truck was only 2,258 pounds, a rating not much better than a half-ton truck. There’s no doubt about it. His Ram 2500 is a terrific truck—it has all of the refinements and “bells and whistles” you would expect to find in a 2022 truck—but he failed to consider the ramifications of optioning-out his ride with a 1,000 pound diesel and a 4WD drivetrain. Essentially, these options lowered the payload rating of his Ram 2500 from 3,660 pounds to 2,258 pounds. Don’t believe me? Look at the Ram ratings chart below.

A few words about the payload rating charts included in this article. Only the standard gasoline engine is included for each make. This is because a diesel engine weighs between 400 and 500 pounds more than its gasoline counterpart. In an article that touts the best payload ratings, it wouldn’t make sense to include them. Other options, though, like drivetrain—either 4WD or 2WD—cab size, and bed sizes are included in our charts because requirements vary from one truck camper owner and another. If you’re looking for a long-bed camper, you’re going to need a long-bed truck. Note also, that the ratings in our charts represent a small sampling of what’s available. Ratings can vary by trim level and options, so even higher GVWR and payload ratings may be obtained depending on which options you choose. So without further adieu, lets take a look at the best 2022 3/4-ton trucks for maximum payload and hauling a truck camper. 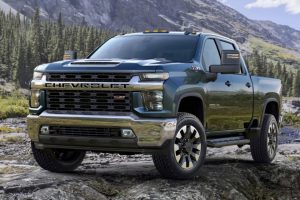 Minimal changes were made to the Silverado is 2022. The standard offering for the Chevy Silverado 2500HD is a small block, gasoline-powered 6.6L V8 that generates 401 horsepower and 464 pound-feet of torque that is linked to a mediocre 6-speed automatic transmission with a 3:73 rear axle. However, Chevy offers one of the best diesel powertrain combinations available on the planet—the venerable Duramax turbo diesel 6.6L V8 mated with the Allison 10-speed automatic. The Duramax cranks out 445 horsepower and 910 pound-feet of torque with the standard 3:42 rear. Unfortunately, at 835 pounds, the Duramax weighs a good deal more than the 6.6L gasoline V8, which tips the scales at 523 pounds, but that’s the tradeoff when you go with a diesel. Equipped with an excellent suspension featuring tried-and-true leaf springs, the Silverado’s weight ratings compare favorably to the competition. A crew cab LT model with the standard bed and 4WD drivetrain offers a GVWR of 10,450 pounds and a payload of 3,817 pounds, while a standard cab LT model with an 8-foot bed and 2WD nets a GVWR of 10,250 pounds and payload of 4,023 pounds. If you plan on taking your truck camper rig off-road, we recommend taking a hard look at the Z71 Off-Road package, which comes with 18-inch wheels, all-terrain tires, a spray-in bedliner, an upgraded suspension, and skid plates. 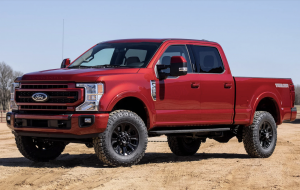 The Ford Super Duty retains it position as the top-selling heavy duty truck in America. The Ford Motor Company offers three excellent engines in the 2022. The tried and true Boss 6.2L V8 with 385 horsepower and 430 foot-pounds of torque comes standard, while the relatively new Godzilla 7.3L V8 gasser with 430 horsepower and 475 foot-pounds of torque is offered as an option. Each is paired with an excellent 10-speed automatic with your choice of either a 3:55, 3:73, or 4:30 gear ratio for your truck camper rig (the diesel option adds a 3:31 gear to the mix). The optional 6.7L Power Stroke turbo-diesel V8 generates 475 horsepower and a whopping 1,050 pound-feet of torque, but at 990 pounds, the Power Stroke is a good deal heavier than the Boss V8, which tops out at 580 pounds, and the Godzilla V8, which maxes out at a surprisingly low 535 pounds. Utilizing leaf springs on the rear axle, Ford’s payload ratings are a mixed bag. You can get the crew cab XLT model with 4WD and the 6.75-foot bed that nets a GVWR of 10,000 pounds and a mediocre payload of 3,538 pounds, while a regular cab XLT model with 2WD and an 8-foot bed offers a GVWR of 10,000 pounds and a better payload of 4,323 pounds. For off-road adventures, we highly recommend opting for the Tremor Package that comes with 35-inch all-terrain tires, increased ride height, an electronic-locking rear differential, and rock crawl and trail control modes. We also recommend opting for the new Godzilla 7.3L V8. Of course, the only negative going with a Ford is the taller cab that requires some kind of riser in the bed to keep the camper from touching the top of the cab. 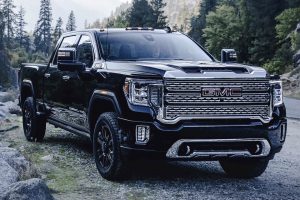 As you’d expect, the differences between the General Motors Chevy 2500HD and Sierra 2500HD are practically nil. Powertrain and drivetrain options are nearly identical with only minuscule differences noted for payload. Like Chevy, the standard offering is a small block, gasoline-powered 6.6L V8 engine linked to a 6-speed automatic transmission with a standard 3:73 rear axle. As an option, the superb Duramax turbo diesel 6.6L V8, which cranks out 445 horsepower and 910 pound-feet of torque, is mated with the excellent Allison 10-speed automatic and a 3:42 rear. Yes, the Duramax is a good deal heavier than the V8 gasser that weighs in at 523 pounds, but hauling that extra weight might be worth it since at 835 pounds the Duramax diesel weighs considerably less than either the Cummins or Power Stroke offerings. Like Chevy, GMC’s payload ratings are both lower and higher than the competition. A crew cab Pro model with the standard bed and 4WD drivetrain offers a GVWR of 10,450 pounds and payload of 3,808 pounds, while a standard cab Pro model and 2WD with an 8-foot bed nets a GVWR of 10,200 pounds and payload of 4,013 pounds. For off-road excursions in your truck camper rig, we recommend opting for the X31 Off-Road Package that comes with twin-tube Rancho shocks and skid plates. 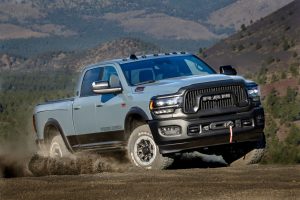 Two very capable engines are being offered by FCA for the Ram 2500 in 2022. The standard offering is a gasoline-powered 6.4L Hemi V-8, which cranks out 410 horsepower and 429 pound-feet of torque. The V8 is mated with an excellent 8-speed automatic transmission with your choice of either a 3:73 or a 4:10 rear axle. The superb 6.7L Cummins diesel I6 is offered as an option, of course. Consumers can choose between either the standard Cummins, which generates 370 horsepower and 850 pound-feet of torque, or an HO version, which makes 400 horsepower and an jaw dropping 1,075 pound-feet of torque. Both diesels are backed by an aging yet still effective 6-speed automatic with the same gear ratios as the standard oil-burner. At 1,060 pounds, the Cummins outweighs the Hemi by a substantial 490 pounds, so the Cummins should be avoided if you’re looking to maximize truck camper payload. In 2022, Ram’s payload ratings are comparable to Ford and GM, but that hasn’t always been the case. From 2014 to 2018, Ram 2500 payload ratings took a hit due to the use of a five-link suspension with excessively soft coil springs on the rear axle. While this approach offered a superior ride, the change lowered the payload ratings of the Ram 2500 significantly. This was corrected in 2019 through the use of a better five-link suspension with stiffer springs, but apparently, the upgrades don’t go far enough. Some owners with truck campers still report an excessively soft and “bouncy” ride with sway corrected only through the use of a sway bar and either Timbrens or SumoSprings. 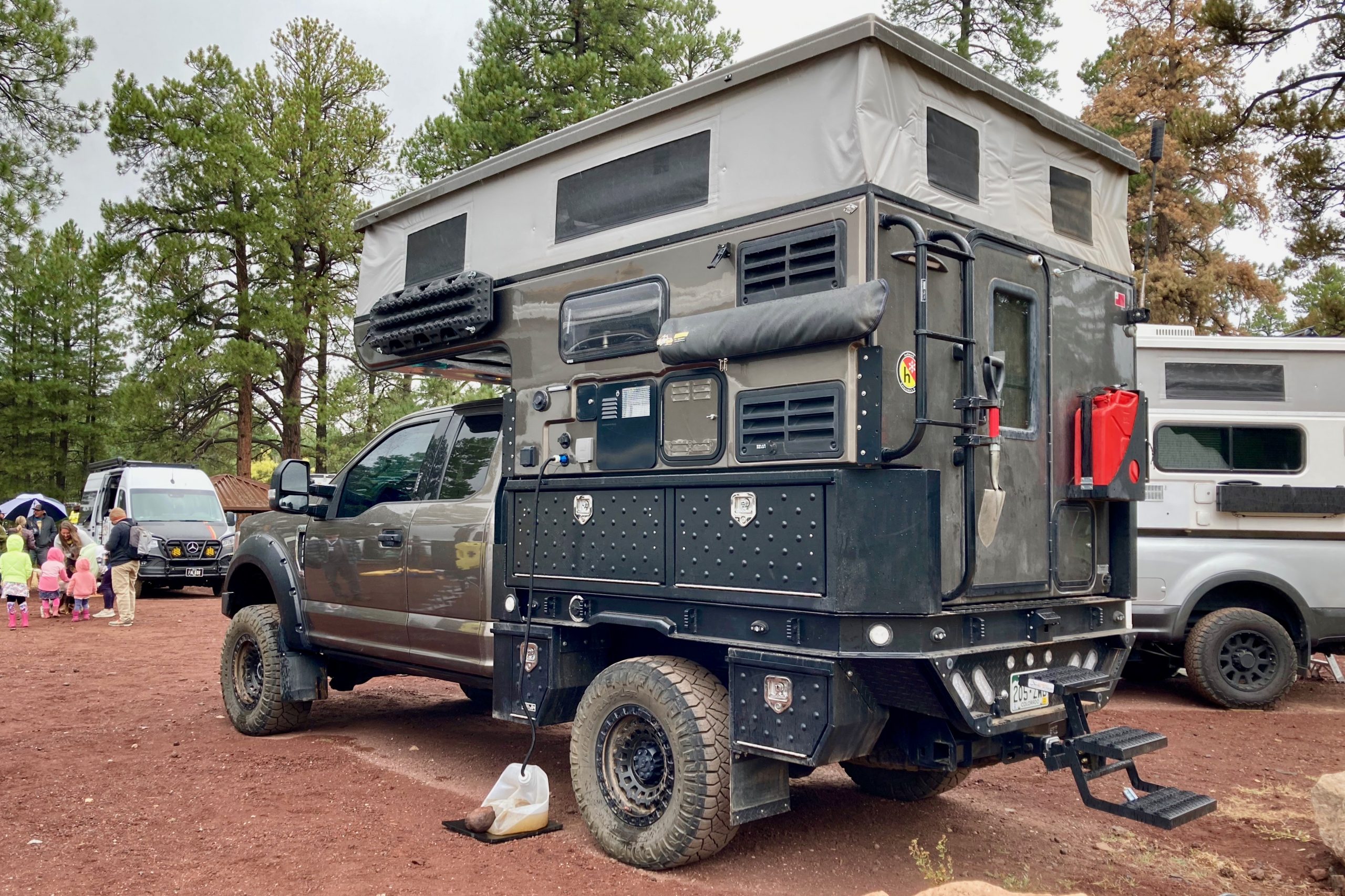 Of all the questions we get, the most commonly asked is can my half-ton pickup truck haul a hard-side truck camper with a wet bath? Most of the time we tell them, no. Why? Because [read more]