The 3rd Annual Truck Camper Adventure Boondocking in the Desert Rally in Quartzsite, Arizona is now in the books with a record 245 truck campers attending the four-day event. The rally drew 411 truck camper owners from 35 states, including Alaska and Maine, and four provinces in Canada. The event consisted of workshops and classes, a sponsored raffle with over $6,000 in prizes, campfire socials, and a truck camper open house . No admission was charged though all attendees were required to pre-register.

Like previous Truck Camper Adventure rallies, the event was held at the Roadrunner Wash BLM area 6 miles south of Quartzsite. The campers were separated into two main groups—one for solar powered rigs, the other for those needing to run a generator.

“It was a real pleasure to be here,” said Joe Kuhn, a full-timer from South Dakota and the owner of a Host Mammoth. “Super, super people, fantastic presentations, and just a lot of fun. It was great being with fun-loving people who love freedom and love the great outdoors. We learned so much. We really liked the classes on the suspension mods and payload and plan on visiting the scales soon. We’ve been to Quartzsite before. It’s interesting out here. It’s like a scene out of Mad Max, but the people are super here. We will definitely be back next year.”

The four-day rally drew 245 truck campers of all makes and models with an excellent mix of hard-side campers and pop-ups plus a few flatbed models including a brand-new triple-slide model by Rugged Mountain. As expected, industry heavyweight, Lance Campers, led the way with an impressive 45 truck campers with Host taking second place with a very strong showing of 27 campers. Northwood Manufacturing took third with 22 Arctic Fox and Wolf Creek campers, while Four Wheel Campers and Adventurer/Eagle Cap tied for fourth place with 19 campers apiece.

Other makes present included 18 Cirrus campers by nuCamp, 17 by Northern Lite, 15 by Northstar, nine by Bigfoot, eight by Hallmark, eight by BundutecUSA, six by Alaskan, four truck campers by Palomino, four by KingStar, three by Travel Lite, three by Outfitter, two by Capri, and two by S&S.

“Just to have been listed in the top five was a great honor,” Lemke said after taking first place. “Winning was beyond incredible. I cannot begin to express how flattered and appreciative I was. Bringing the trophy home to share with my dad meant the world to me. He helped me a lot. This award is extra special to me because it’s a purposeful-built truck for off-road camping.”

During the rally, temperatures were a good 7 to 10 degrees warmer than normal with highs around 81 degrees, though a light breeze made most of the daylight events comfortable. Sun screen, hats, and sun glasses were a must.

The rally included a number of activities. Due to the pandemic, neither the potluck dinner nor the dessert social were held, though numerous classes and workshops were conducted to instruct and inform. Topics included a workshop on tire repair, classes on radio communications, off-roading, alternator battery charging, lithium batteries, suspension modifications, solar power, payload and towing boondocking essentials, and full-timing in a truck camper. Additional classes were given on Harvest Hosts, the Omnia Stovetop cooker, nighttime photography, and truck camper cooking.

“This was our first actual big trip,” explained Mary Jane McDougal from Nova Scotia and owner of a Travel Lite 8090RX. “I think the rally is a great idea. It was good for us because it gave us something to look forward to with the truck camper. This is our first truck camper, but really haven’t used it until now. We really enjoyed ourselves here. Quartzsite is a great place to visit as snowbirds because we can camp for free and meet great people. We will be back next year.” 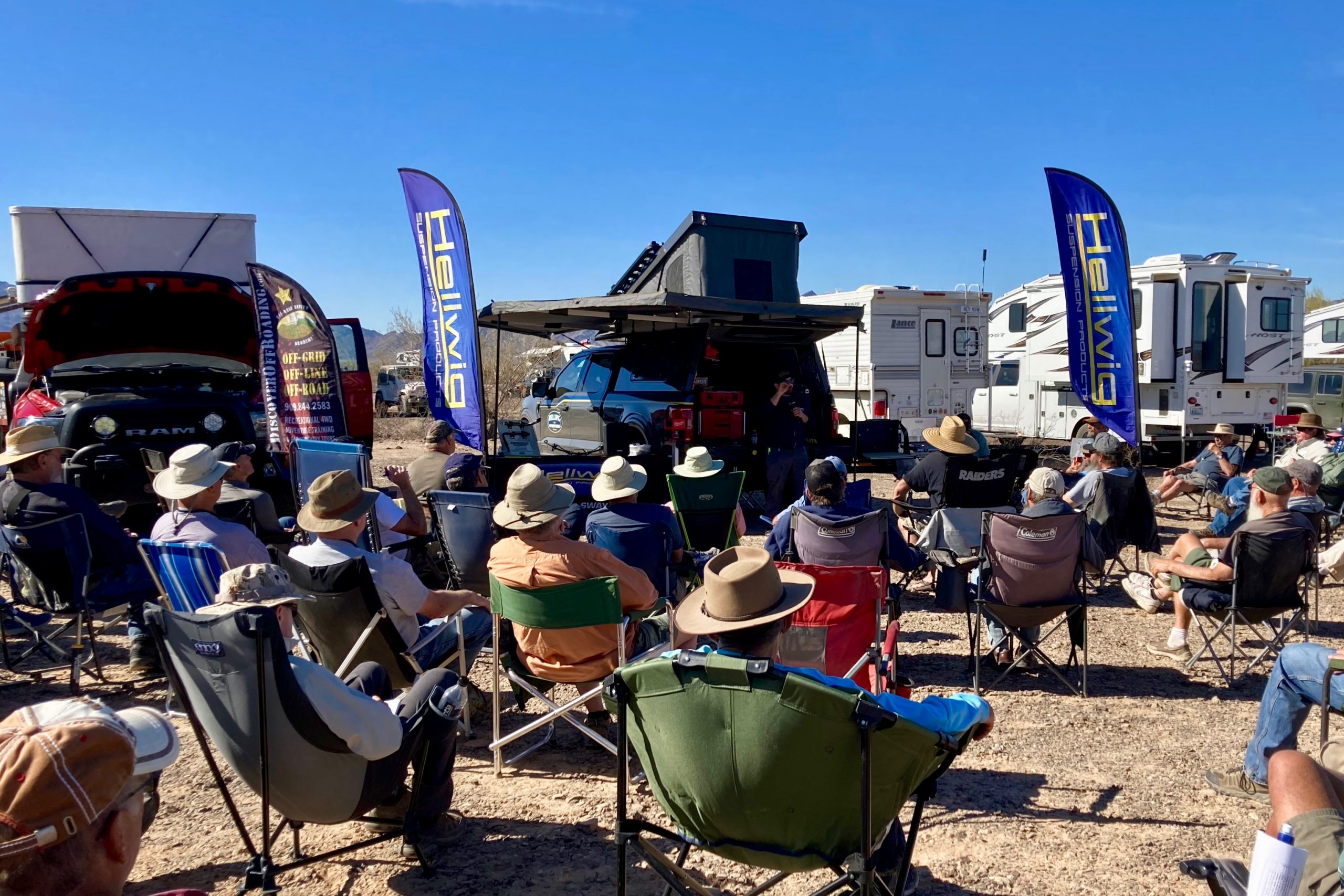 The Saturday night raffle did not disappoint with a wide variety of prizes. The prizes included a King Controls Cell Booster and 90 watt portable solar panel by BundutecUSA, a Solo Stove and blanket by Lance Campers, a NovaKool portable DC refrigerator by KingStar, a Nimbl Vehicles Fire Pit, a DC to DC charger and battery meter by Expion360, an Otter Box Cooler by nuCamp, a set of Rebel SumoSprings by Supersprings, two StableCamper $500 gift certificates, and a set of Timbren SES bumpstops Additional items donated to the raffle included a Tire Pressure Monitoring System by Truck Systems Technologies, a $400 CamperCradle gift certificate, a rear-view camera and food storage set by Tag-Trailer, a laser-engraved RV table by SmithCreek Mill, two Omnia Stovetop Ovens, a Froli Star Modular Sleep System, and a Big Wig Sway Bar by Hellwig. In total, raffled prizes exceeded $6,000.

Proceeds from all donations will be used to improve future rallies. Suggestions for future rallies included a large canopy for classes, live music, and portable toilets for those who walk long distances to attend classes. We agree on the first two items, but not necessarily on the latter. As a matter of fact, a 20×40-foot canopy has already been reserved for next year’s event (a large canopy with lighting will also allow us to schedule classes and other activities at night). Live music has also been scheduled next year. We will look into portable toilets though we believe they would be cost prohibitive. 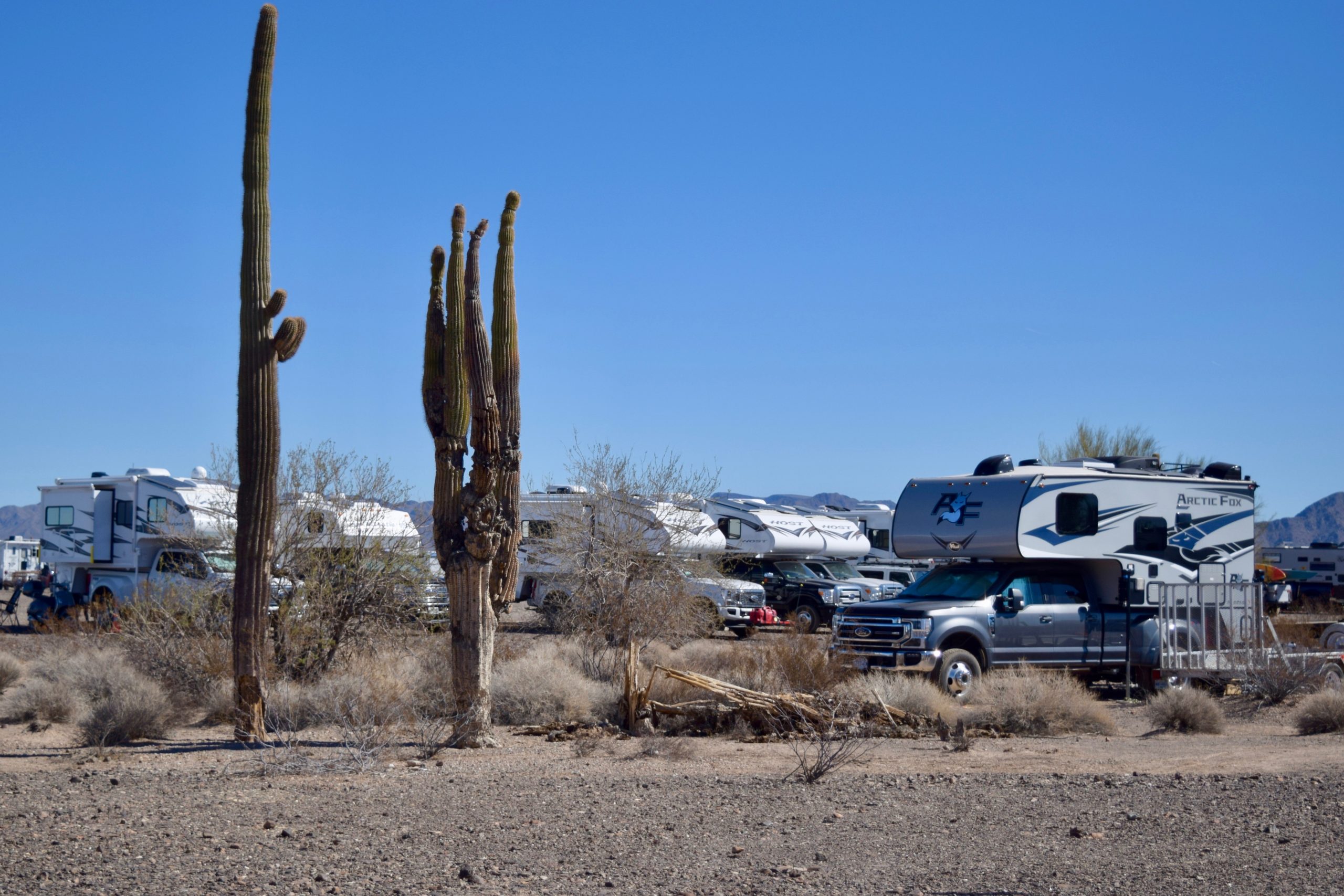 Feedback was solicited in an effort to improve future rallies. Suggestions included a truck camper modification contest with a prize for the winner, classes on crafts and photography, moving the open house to Friday or Saturday vice Sunday, scheduling a Jeep Trail Ride, setting an evening aside for boardgames, and adding a lunch hour to the schedule.

“It was a great experience,” said David and Laurie Martin of Louisiana and owners of a Host Mammoth. “We loved all of the classes and meeting people. We met some great people. They’ll be coming to our house and we’ll be going to theirs. We’ll probably keep in touch forever. We’ve really enjoyed meeting other truck camper owners. Truck camper people are a little different than typical RV’ers. They’re friendlier and more adventurous. We learned some great things about lithium batteries and by just hanging out with other truck camper owners. We’ll definitely be back next year.”

Entries for this year’s rally photo contest must be submitted by Midnight, Feb 25, so don’t delay. Send photos to tcadventuremag@gmail.com.

The next rally will be held February 9-12, 2023 with a February 8 check-in. Registration will open on September 1, 2022, via Eventbrite. A $25 registration fee will be charged per truck camper to defray the costs for renting a large canopy and other rally expenditures, and for using Eventbrite. Like the 2022 rally, enrollment will be capped at 300 campers. Events lose the friendly, one-on-one feel if they get too large.

Each year thousands of overland enthusiasts gather near Flagstaff, Arizona, for the Overland Expo West. The event, which showcases hundreds of overland vehicles and products as well as an impressive schedule of workshops and classes, [read more]