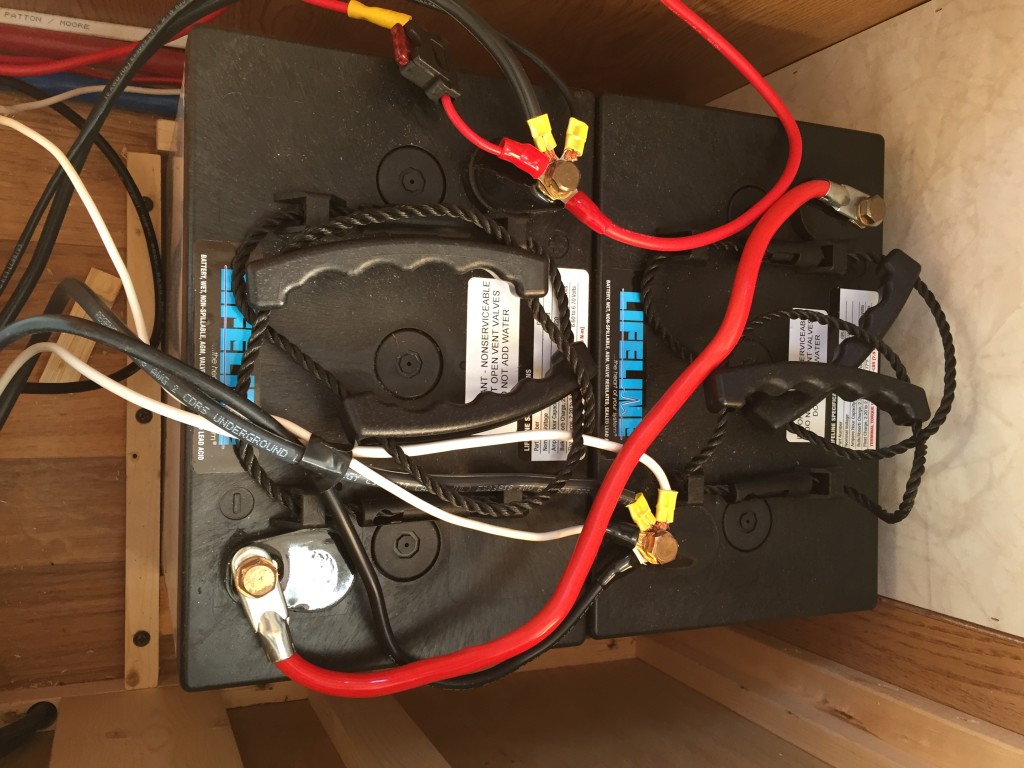 I recently upgraded the batteries in my Northstar Laredo truck camper from the OEM pair of Group-27 12 volt RV/Marine batteries to a pair of 6 volt Lifeline GPL-4CT Absorbed Glass Mat (AGM) batteries. Going with 6 volt batteries is a popular choice and made sense for me, too. Not only are 6 volt golf cart batteries true deep cycle batteries, but making the change also increased my camper’s 12 volt capacity from 180 amp hours to 220 amp hours. How’s it possible to use 6 volt batteries in a 12 volt system? Simply wire them in series. When you wire two 6 volt batteries in series you have, in essence, one huge 12 volt battery (when I say huge, I mean it. Each 6 volt Lifeline AGM battery weighs 66 pounds). Some may balk at the $280 price for a single Lifeline AGM battery, arguing that they can buy three 6 volt wet cell batteries at Costco for the same price, but for me Lifeline AGMs are well worth it. Read on if you’re interested in learning why.

First a little background. The AGM battery was originally developed in 1985 for military aircraft where power, weight, safety, and reliability were prime considerations.  The most important benefit of the AGM battery is that it requires no maintenance or watering as the battery is sealed. The AGM battery is still technically a lead-acid battery (like a wet cell battery), but the electrolyte inside is encased in a fibrous glass mat that can’t leak or be spilled. Not only that, but the AGM battery charges 20 percent faster, has a slower self-discharge rate, about 2 percent a month, and is practically impervious to freeze damage. Since there’s no liquid inside, an AGM battery can be mounted on its side, an important benefit for small battery and storage compartments like those found in truck campers.

The AGM battery offers one more very important benefit. Since the AGM battery is sealed it doesn’t require venting to the outside like the traditional wet cell battery. This means that the AGM battery can be mounted inside your RV. Not only that, but installing your batteries inside your camper has the added benefit of keeping your batteries warmer since they won’t be exposed to freezing temperatures (a battery’s capacity falls to 50 percent at 0 degrees). One final cautionary note. If you’re interested in mounting your AGM batteries inside your RV, you’ll need to be careful not to install them in a sealed compartment. AGM batteries should have some kind of air exchange in the unlikely event that they’re ever overcharged. 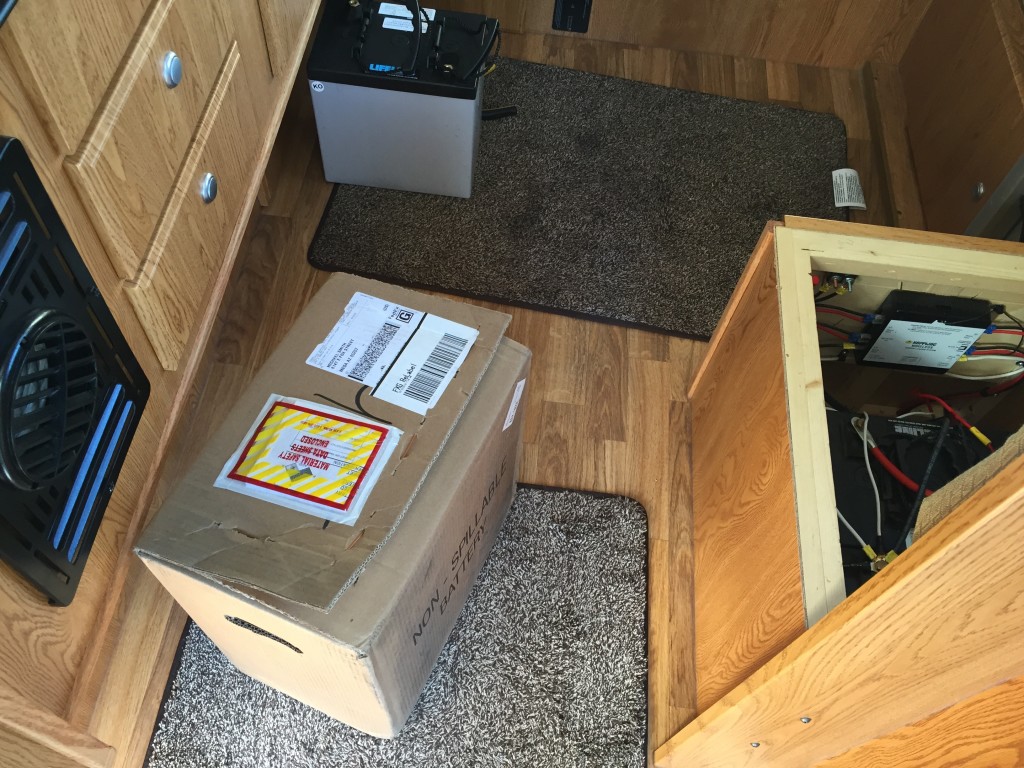 If you’re not familiar with Lifeline AGM batteries, they’re widely considered to be the best in the industry. Lifeline AGMs provide nearly 1,000 cycles at a 50 percent discharge rate. This is significantly higher than the competition’s wet cell and gel batteries, which offer only between 300 to 450 cycles. Lifeline batteries facilitate a faster recharge rate as well. According to Lifeline’s website, customers can charge their 100 amp hour Lifeline AGM batteries with 500 amp chargers. This is higher than what the typical RV owner will ever throw at the battery, but still, it’s nice to know that Lifeline batteries can handle higher, more powerful charge rates if they’re ever needed. How long do lifeline AGM batteries last? The typical life span ranges between 5 and 8 years under normal use, though I know a guy who had a pair still going strong after 10 years.

Another great thing about Lifeline AGM batteries, is that they’re U.S. Mil-Spec certified. This means the battery can endure severe shock and vibrations and work in extreme latitudes from equatorial heat to polar ice. Not only that, but Lifeline batteries provide unrivaled safety during severe overcharging situations since they produce less than 2 percent hydrogen gas by volume (4.1 percent is required for flammability in air). Lifeline also offers one of the best warranties in the industry, with a 5-year pro-rated and a one-year free replacement. Indeed, the company’s reputation is so high that over 150 U.S. and international companies now offer Lifeline batteries as OEM. What’s the bottom line? The rugged and reliable Lifeline battery is perfect for off-roading and overlanding in all kinds of terrain and in all types of climates.

As great as Lifeline AGM batteries are, you still need to recharge them properly in order to ensure they provide long lasting service. Lifeline recommends 14.2 to 14.4 volts for bulk and absorption charging and 13.2 to 13.4 for float charging. Lifeline also recommends a minimum of 20 amps per 100 amp hours of battery when deeply cycled at 50 percent with 500 amps being the upper limit. For a 220 amp hour battery bank, this means you’ll need to periodically recharge them with at least 40 amps at 14.4 volts. Since most RV solar power systems produce nowhere near this amount (mine produces a maximum of 12 amps), you’ll need to use your camper’s 45 or 55 amp converter/charger periodically to ensure your Lifelines are completely recharged.

If your Lifeline AGMs are showing signs of a loss in capacity, don’t fret. Equalization is actually recommended by Lifeline as a recovery tool for their AGM batteries. Some may say that equalization is done to wet cell and calcium batteries only, but this isn’t entirely true. Lifeline recommends that equalization be done for their AGM batteries as well. Equalization is done by charging your AGM batteries with 15.5 volts for 8 hours after a performing normal charge. Doing this should bring your Lifelines back to full health. What’s the bottom line? Never store or leave your batteries in a state of 80 percent charge or less for any length of time. If you do this on a repeated basis without properly charging and equalizing them, you’ll end up with very expensive paperweights in two or three years. 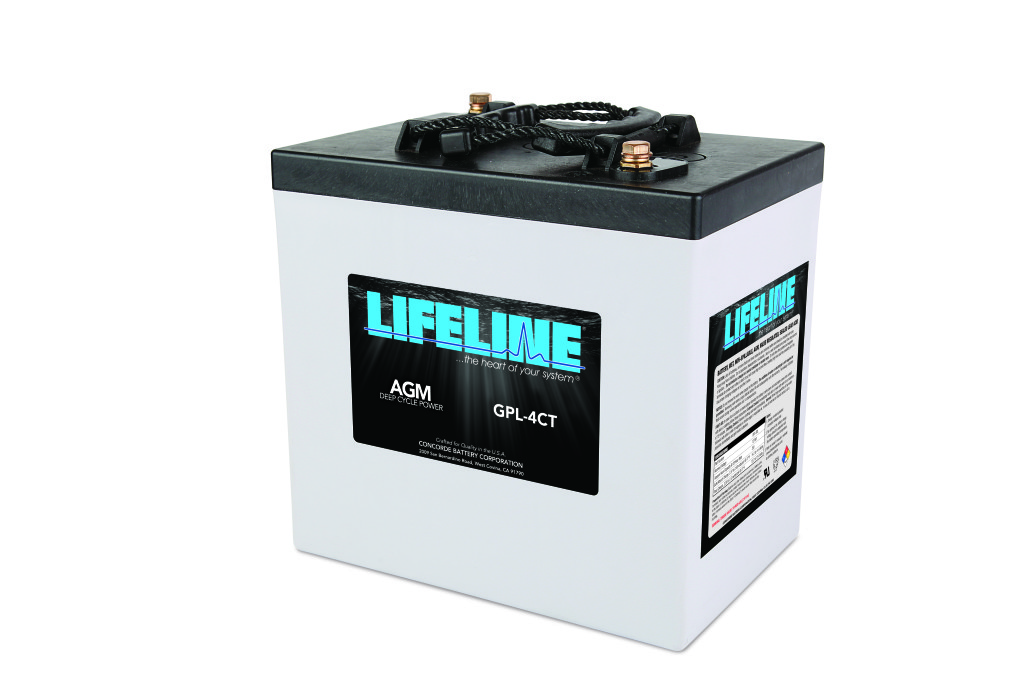 How to Build a Real Overland Expedition Truck Camper

Few couples are more recognizable in the overland community than Gary and Monika Wescott. In fact, you can even say they’re living legends. For more than 48 years, the couple has explored the world from [read more]

The 2021 Truck Camper Adventure Boondocking in the Desert Rally in Quartzsite, Arizona enjoyed a record showing in what was probably the largest truck camper rally ever held. Consisting of 173 attendees and 107 campers [read more]