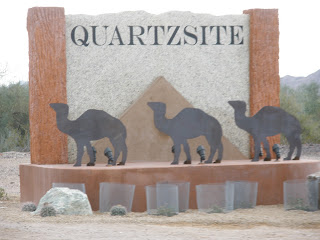 Nestled near the California border, Quartzsite, AZ is known as the boondocking capital of the world for Recreational Vehicle (RV) owners, but the small desert town is also renowned for its winter shopping, gemstones, and rocks. Indeed, swap meets and vendors selling their wares can be seen in every corner of town. If you love to shop, then Quartzsite is where it’s at, especially in late January.

Vendors, of course, won’t be the only thing you’ll see in large numbers around Quartzsite. With a population of only 3,397, the “Q,” as it’s affectionately called, also welcomes the migration of hundreds of thousands of RVs and their owners to the town each winter. You’ll find most of these RVs boondocking on public land, but you’ll also find many parked at the numerous RV Parks around town–I counted a total of 28 on the chamber of commerce website. And there must be a half-dozen RV dealerships in town as well. If you love RVs and the RV lifestyle, then Quartzsite is the Woodstock or Mecca for RV owners.

At an elevation of 879 ft, Quartzsite lies on the western portion of the La Posa Plain along Tyson Wash and is nearly surrounded by mountains. The Dome Rock Mountains overlook the town on the west with Granite Mountain located to the southwest and Oldman Mountain located to the northwest. The Plomosa Mountains lie across the La Posa plain to the east. Quartzsite receives very little rainfall, just four inches per year, and enjoys very moderate temperatures, between November and April, and extremely hot temperatures, from June through September. The area is also prone to high winds and dust storms year round, especially in late summer and in the fall. The town sits in the middle of vast tracts of public land administered by the Bureau of Land Management (BLM). The plentiful amount of public land in the area coupled with the pleasant climate accounts for its extreme popularity as a camping and shopping location in late fall, winter, and early spring.

As for why three camels and a pyramid appear on the town’s official welcome sign, that’s a pretty neat story. The sign gives tribute to Quartzsite’s most famous citizen, one Hadji Ali, a Syrian hired to ride in the short-lived U.S. Camel Corps (the soldiers had trouble pronouncing Hadji’s Arabic name so they simply called him ‘Hi Jolly’). Shipped to America in 1855, the 77 camels of the U.S. Camel Corps more than proved their worth hauling freight in the dry and arid climate of the American southwest. In spite of this success, however, the unit was dissolved after the American Civil War began and the existing animals were auctioned off. Years later, after marrying and fathering two children, Hi Jolly moved to Quartzsite where he later died in 1902 at the age of 73. His grave site in town is marked by a small pyramid made of rock and mortar and is a popular tourist attraction. A BLM camping area near town also bears his name.

If you’re not familiar with the BLM camping areas around Quartzsite, here’s a quick primer. The largest BLM area, called the La Posa Long-Term Visitor Area (LTVA), is located just south of town off the US-95. To boondock there you must purchase either a $40 permit for two-weeks or a $180 permit for seven months (September to April). This fee includes garbage, potable water, and dump station access. The remaining five BLM camping areas are completely free, but the stays at these locations are limited to 14-days. The five areas are strategically located outside of town. The Plomosa and Hi Jolly BLM areas are located a short distance north of town off the US-95, while the Scaddan Wash, Dome Rock, and Roadrunner BLM areas are located south of the I-10. For those not staying at the La Posa LTVA, a few locations in town, like The Pit Stop, provide water, sewer, and garbage services. Trucks providing mobile sewer and water services are available as well.

When we visited the Q last week, we boondocked at Scaddan Wash. It was pretty crowded, but there was still plenty of elbow room for those willing to drive a little bit off the main road. We took a look at the other 14-day BLM sites at Plomosa, Hi Jolly, and Dome Rock, but chose Scaddan Wash due to its proximity to the big tent and the surrounding vendors south of the I-10. We enjoyed boondocking at Scaddan Wash. While there are several deep washes that cut through the area, there are plenty of places where you can park that are pretty level. I would still advise bringing a set of leveling blocks, just in case.

Each class of RV was well represented in Quartzsite, but the Class A motor home and fifth wheel trailers were by far the most common. I was pleasantly surprised at how many truck campers and Airstream travel trailers we saw in and around town. We saw quite a few quads, jeeps, and golf carts running around the area, too.

The weather when we arrived last Friday was darn near perfect–sunny and 70 degrees–but that quickly changed Saturday morning when a low weather front passed through the area. The weather front not only brought cloudy skies, but also wind, lots of it. The winds were especially strong Saturday night with some gusts reportedly hitting 40mph and causing the camper to sway a bit (we didn’t have our stabilizers down). Having just upgraded my solar power system from 120 to 240 watts, I have to admit, I was bummed by the overcast conditions. However, the solar power system still performed remarkably well, often pulling in as much as 6 amps. Not too shabby for a system rated for 17 amps! Enough about the camper, let’s talk about the shopping…

The 29th Annual Sports, Vacation and RV Show was pretty impressive. The tent, housing well over 300 exhibits and vendors, is massive at 69,000 sq ft. and sits on a 20 acre site with even more exhibits. Vendors of all kinds could be found at the show including many concessionaires selling food similar to what you would find at your local county fair. If you don’t like crowds, I wouldn’t recommend attending the show in the morning. There were so many people there that it was extremely difficult at times to get around. The crowds had thinned out quite a bit by mid to late afternoon, though the high winds we experienced on Saturday may have contributed to the reduced numbers. The pics below should give you some idea of how popular this show really is. 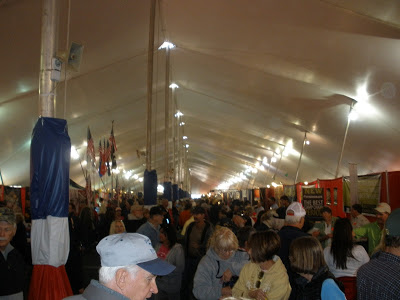 Inside the tent we saw the usual items you’ll find at most RV shows along with a few surprises. Aside from women’s blouses and kitchen utensils, perhaps the most common item being sold were LED lights, a testament to just how popular the technology has become. One of several items that caught my eye were the storage compartment lock replacements being sold by Industrial Lock and Hardware. The fact that practically all RVs have the same CH751 key has never sat well with me, so I’m in the process of ordering new locks from them. Another item that interested me was the brand new 12 volt motion activated porch light being offered by Star Lights Incorporated. I didn’t buy one because of the $60 price tag, but I thought it was a good idea worth investigating further. Surprising to see was a booth at the show advertising for the American Association for Nude Recreation. 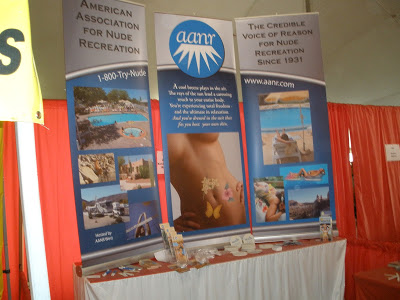 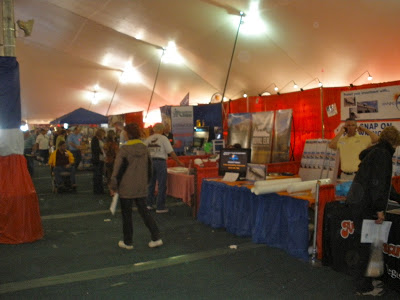 I was pleasantly surprised to find Brian Brawdy and his Lance truck camper at the show. Brian hosts a weekly show and has been featured in many TV and radio interviews about his green RV (you can find several of these on YouTube). I’ve been an admirer of Brian and his decked-out Lance camper for years and was thrilled to finally meet him, talk about his current tour gig, and take a quick peek at his camper. An avid survivalist as well, Brian’s display also featured emergency food storage by Wise. After buying a large amount of food for my emergency supply earlier in the month, I was glad to see Brian beating the preparedness drum as well. I found Brian to be genuine and extremely friendly and one of the nicest guys I’ve ever met.

So what did we end up buying at the show? My wife and I were shocked by the fact that I bought only four items for the camper. My favorite purchase was an RV hatch lift kit from hatchlift.com. My camper has a storage compartment door that is a real PITA with no way to stay open, so I was happy to see a solution to this problem being offered at the show. Hatchlift’s kits are a bit spendy at $36, but if it works as advertised the cost will be worth it. For only $10 I also bought a roll of silicone Rescue Tape. Amazing stuff, Rescue Tape can be used on anything wet or dry like a leaking radiator hose or propane line. I also bought a queen size set of Christopher Adams Egyptian Comfort bed sheets for $25 and a new environmentally friendly holding tank product by Unique. Karen bought several homemade T-shirt appliques made from tiny gemstones. I have to admit that they were pretty cool looking appliques. More importantly, she was pretty excited by the purchases. 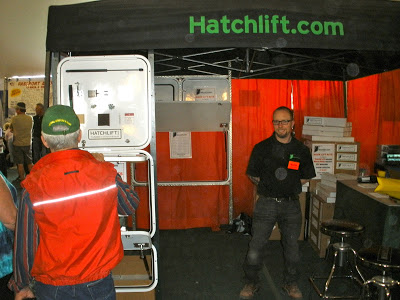 Finding a parking spot near the big tent can be a big challenge, which may require you to park quite a ways from the area. Be careful of the deep sand in the parking lots to the east. We saw several cars and trucks get stuck in a few areas including a 4×2 Ford dually. And if things are really busy–and they usually are–I wouldn’t recommend taking your RV to the show, unless you have a truck camper or a small Class C motor home. It’s best to leave your big RV behind like at one of the nearby BLM sites. We did see a few Class A motor homes park at the show, but expect that they had an extremely difficult time getting out. 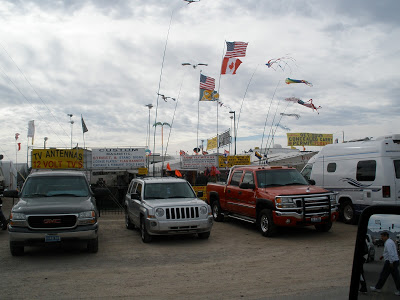 We really enjoyed our four-day visit to Quartzsite. We’ve been to the town several times before in the past, but never had an opportunity to do so in late January during the peak shopping and boondocking period. While the weather and the boondocking in Quartzsite are terrific, the shopping is truly another aspect that makes Quartzsite a great RV experience. If you haven’t done so already, I highly recommend you place Quartzsite on your bucket list. If you do, you may find yourself coming back year after year like so many others.

Pros and Cons of the Danfoss DC Compressor Refrigerator

If you’re planning to buy a truck camper from the factory, one of the most important decisions you’ll have to make is which type of refrigerator to have installed in it. During the construction of [read more]

Photos of our recent two week trip to N. Arizona and Utah