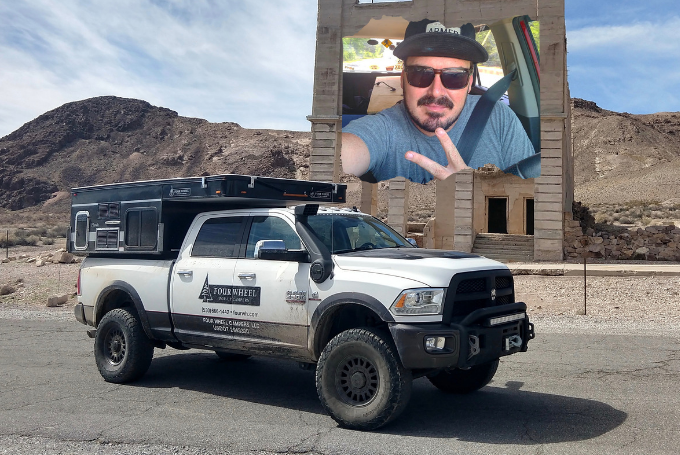 While on my first journey across America along the Trans America Trail I became fascinated with the idea of finding or building the ultimate overland rig. In my mind, I have played out all sorts of different scenarios from the traditional Truck or SUV with a roof-top tent, to a Sportsmobile off-road van and even the more elaborate full on expedition setups like an EarthRoamer. In my mind, the perfect overland rig meant that it had to be capable of going off-road, provide a safe and secure place for my wife and I to sleep and be away from the elements, and set up/take down must be fast and easy in an effort to avoid added aggravation while on the trail. My current setup, a 2015 4Runner with custom sleeping setup, fridge, and chuck box style kitchen, provides all of this in a very compact design, but leaves my wife and I both craving more space.

In 2017, while on a trip through the desert of Utah, I saw a couple traveling in a Toyota Tacoma with a slide-in camper in the back. After doing a bit of research online I was introduced to Four Wheel Pop Up Campers (FWC). FWC has been making aluminum slide in campers for the back of trucks since 1972 at their factory in Woodland, California. The first thing that drew me to them was the fact they were made right here in the USA. The aluminum construction makes it strong and durable, yet still lightweight with some models coming in under 800 pounds. The fact that it popped up meant that it would be smaller and more maneuverable than some of the other taller options on the market. While at Overland Expo East I got to meet the awesome crew from FWC and had the opportunity to walk around a few of their models. I was left asking myself, could this be the ultimate overland setup?

In March of this year, I had the opportunity to put the Four Wheel Pop Up Camper to the test when they loaned me a 2016 Ram 3500 up fitted by American Expedition Vehicles (AEV) and equipped with their Hawk model camper. There was no question that the Ram, aptly named the AEV Prospector, would undoubtedly take me anywhere I needed to go. The only question was where would that be? The mountains of California were filled with snow this time of year and being from the South Carolina, I’m in no way shape or form interested in being involved with that nonsense! I decided instead that March would be a perfect time of year to visit Death Valley. After all, the last time I went to the Mojave Desert in March the weather couldn’t have been more perfect with 80 degree days and 55 degree nights. I couldn’t ask for better camping weather. 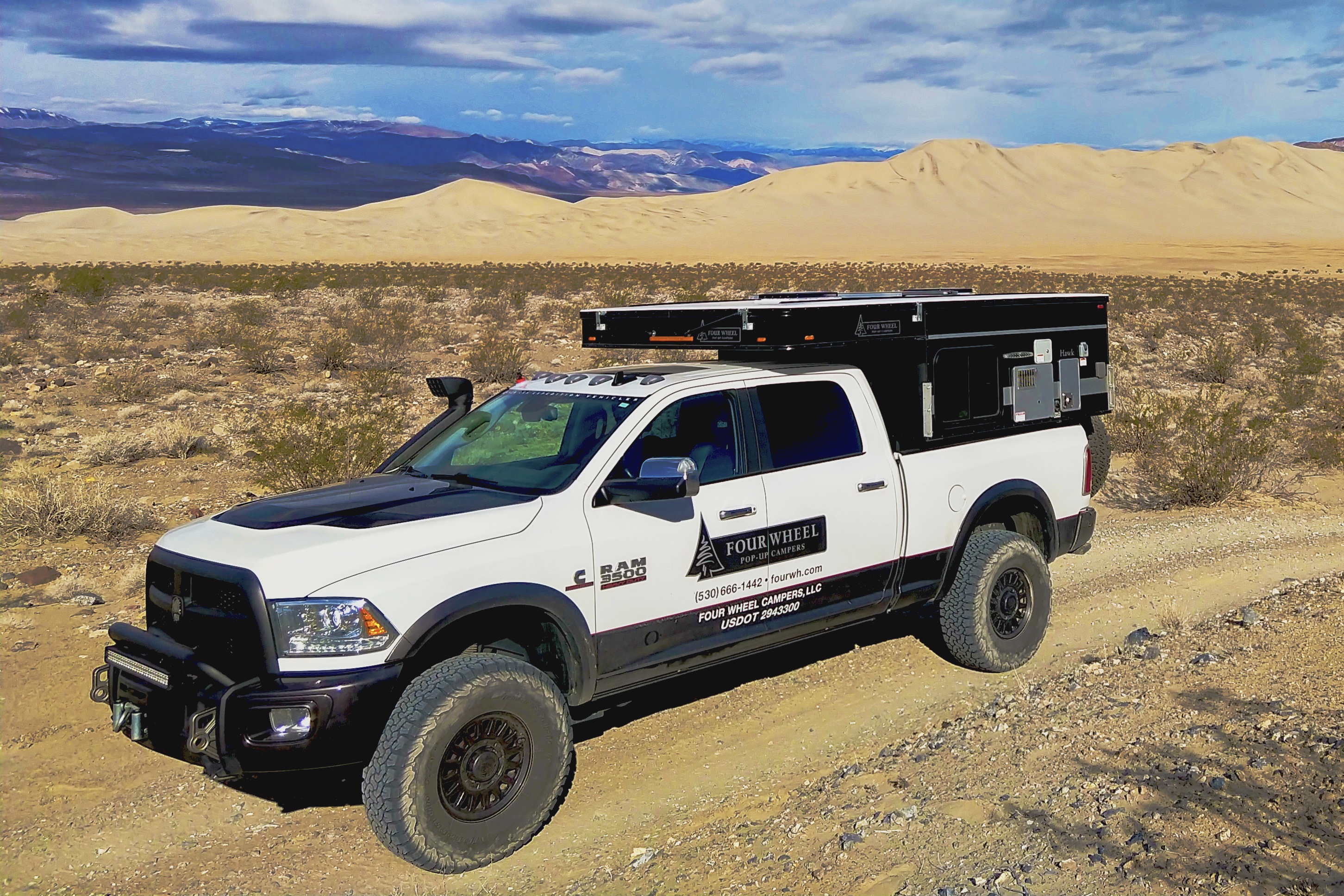 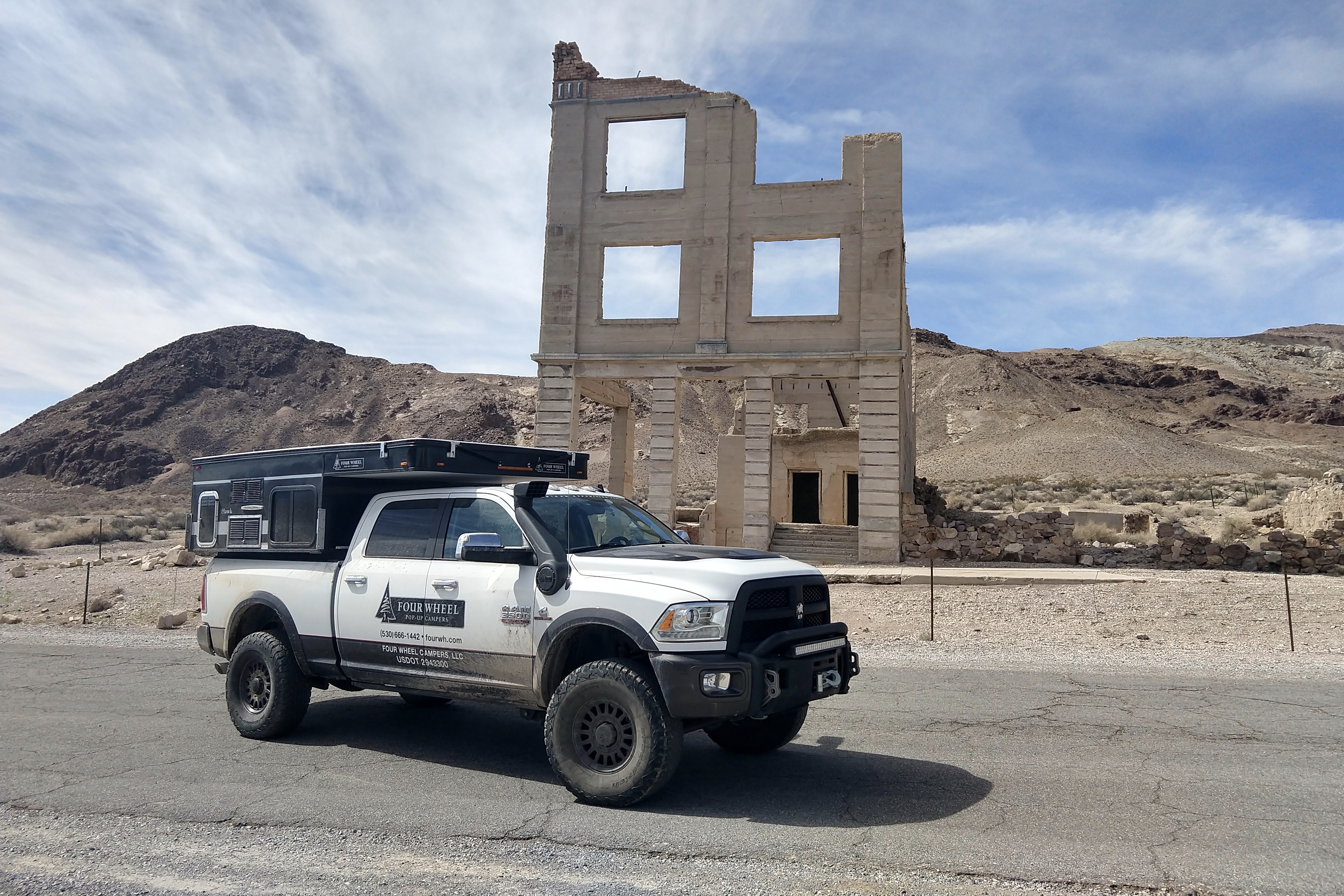 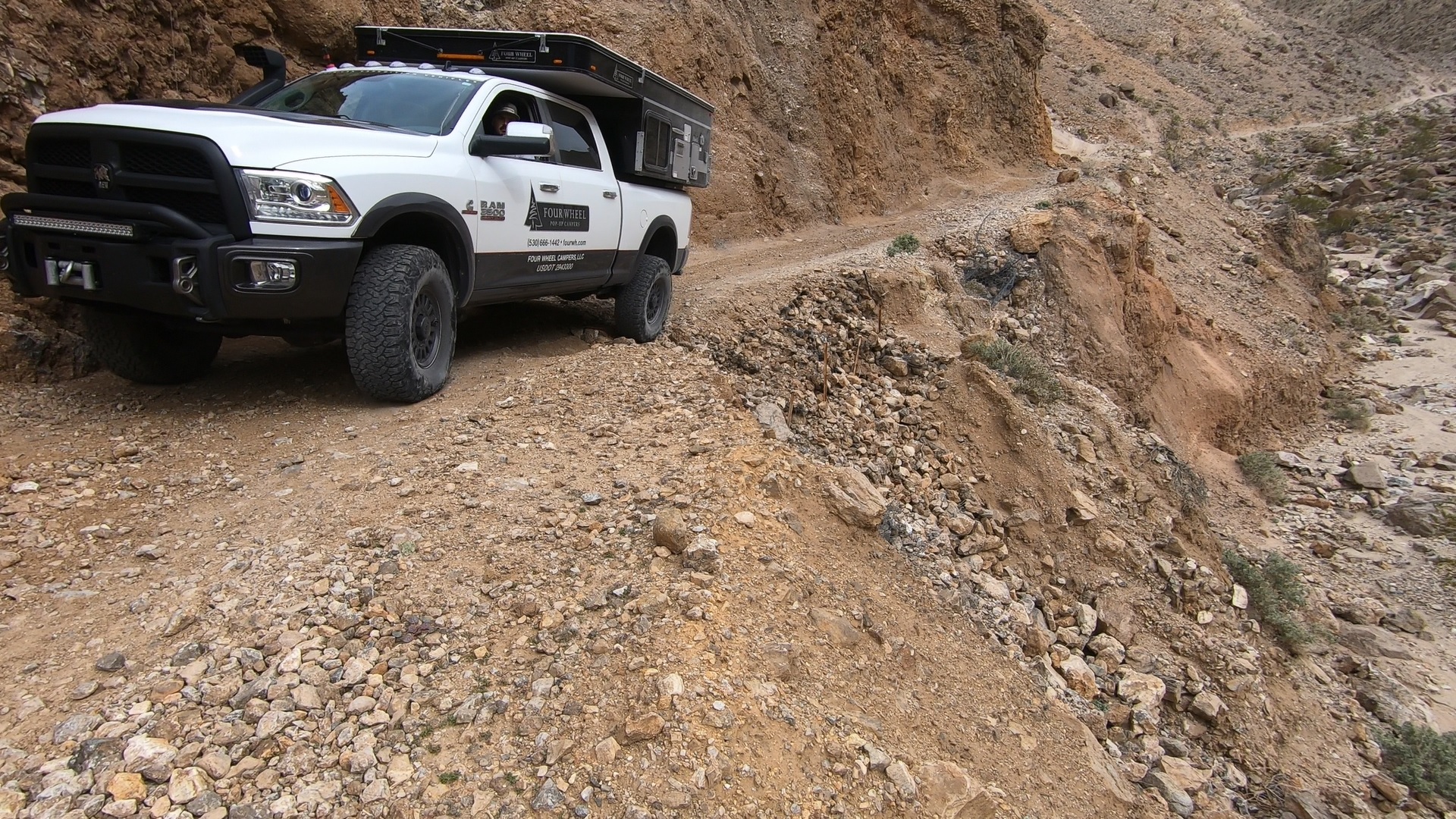 This trip would prove to me that even without the heat of the summer, Death Valley truly earns its name and is definitely one of the most challenging terrains I’ve ever explored. I encountered everything you could imagine, from snow to rain, sand and mud, large rocks and even some flooding! The AEV Prospector handled the tough terrain like a champ with zero issues. No matter what I was faced with the 37-inch tires seemed to roll over. I was detoured at steep pass when I determined that the rig was just too big to attempt crawling through the tight rocks. This detour brought me the back way into the Saline Valley Warm Springs taking me past Teakettle Junction and Racetrack Playa. I wasn’t able to catch any moving rocks, or even see traces of such, but I was able to catch a glimpse of an F-18 Jet flying straight towards me through the canyon so low that I think I may have been able to smile on the pilots face! From there I ventured over Lippincott Pass, a tight trail over the mountain with sharp drop-offs and narrow switchbacks, some requiring three-point turns to maneuver around. 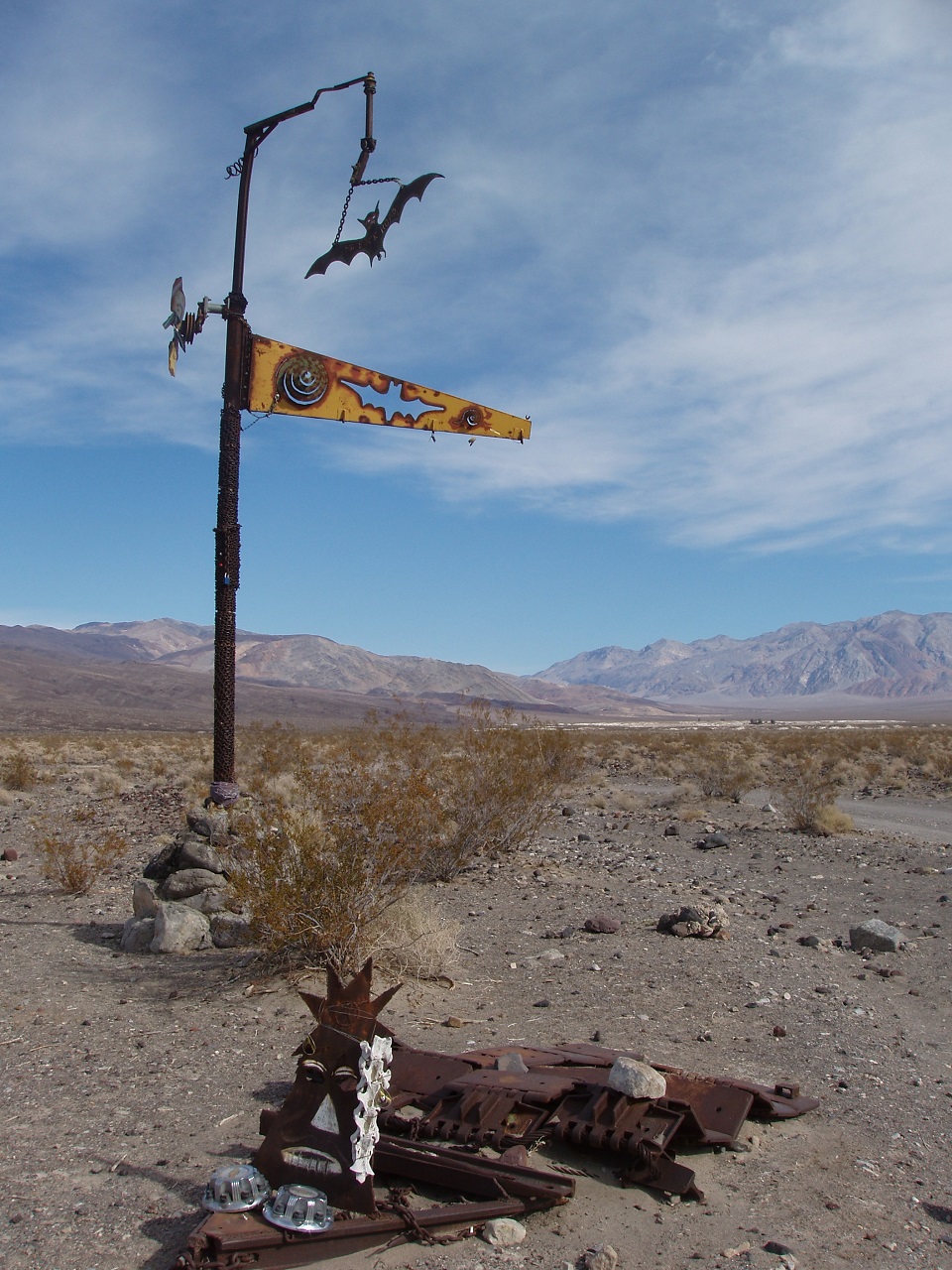 I did encounter one problem with the camper. The extreme washboards in combination with the violent rocking back and forth along the rocks caused the aluminum turnbuckles that attach the FWC to the inside of the bed to come loose. Apparently, when this happened it created uneven stress on one of the turnbuckles causing the hook to bend, making it nearly impossible to hook back. Luckily I came across what’s known as a “Bat Pole” where I was able to bend the hook back with the help of a random discarded engine block, and get it reattached. The buckles that connect the FWC to the bed of the truck are nice because they are inside the bed rather than outside like others. This design makes it a little easier to overlook the regular tightening you may do on others as well as warrants a different style turnbuckle which in my opinion would be the only weak point of the FWC. I would recommend carrying extra turnbuckles when you plan to do heavy off-roading. Upon talking with other FWC owners at the warm springs they made mention that they have safety straps they have attached as a fail safe just in case the buckles come loose. From that point on I made it a routine to check the tightness every morning and didn’t have any further issues.

It was the journey out of the Valley towards Panamint Springs where it became apparent just how easy it was to get stuck in an emergency situation in Death Valley. The detour that I made around Steel Pass was 100+ miles and the Ram 3500 with the AEV package was getting a dismal 11 mpg while in 4WD through that rough terrain. Just as I entered a storm that made it nearly impossible to see more than 2 feet in front of me, I noticed a huge boulder had fallen in the trail. I had only 60 miles range left and it was 120+ miles back around to where I knew there was a diesel station, this meant that no matter what, I had to make it around this boulder. Out of the fog came Bob, the pilot of an older FJ40 that was sure to have no issue making it around this boulder, but couldn’t make it around both the boulder and the Ram and there was no way to go around. With Bob’s help spotting, I was able to climb up the mountain side a little and barely make it past the boulder, luckily. From there I was able to make it to Panamint Springs where they happily charged $5.74 a gallon for the much needed diesel!! 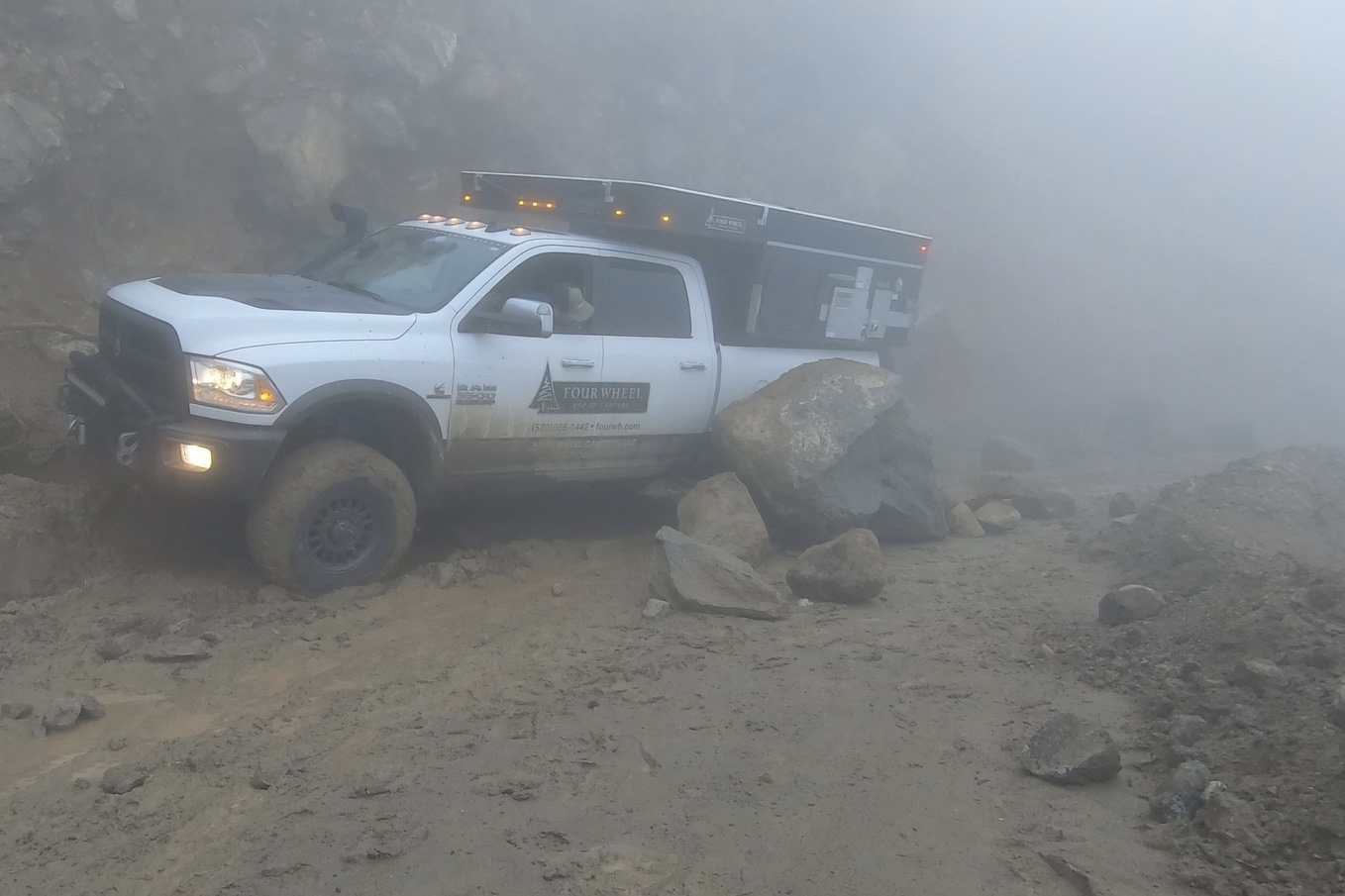 The Four Wheel Pop Up Camper is without a doubt the most ideal setup I can think of for overlanding. Compared to my normal set up, the FWC is like a penthouse!! The queen size bed that slides-out to roughly a king-size ensure my wife and I have plenty of room to rest for the next days adventure. The kitchen equipped with stove, sink and fridge is set-up perfect and allowed for great flow and provided awesome use of space. The Hawk model I was in had the front dining option with a multi functional table that transformed into additional bed if needed. The seating provided a good spot to sit and chill when the weather was too bad for hanging out outside. I became pretty used to the onboard furnace and found myself in a routine of waking up and turning it on to quickly warm up the camper on colder mornings. It even comes equipped with a water heater which provided a refreshing shower after dealing with the mud dirt and sand all day. The 20 gallons of on board water was plenty and ended up lasting the full, 12-day journey I took the Hawk on. This particular setup was huge which provided great space, but had serious limitations when it came to off-road performance. 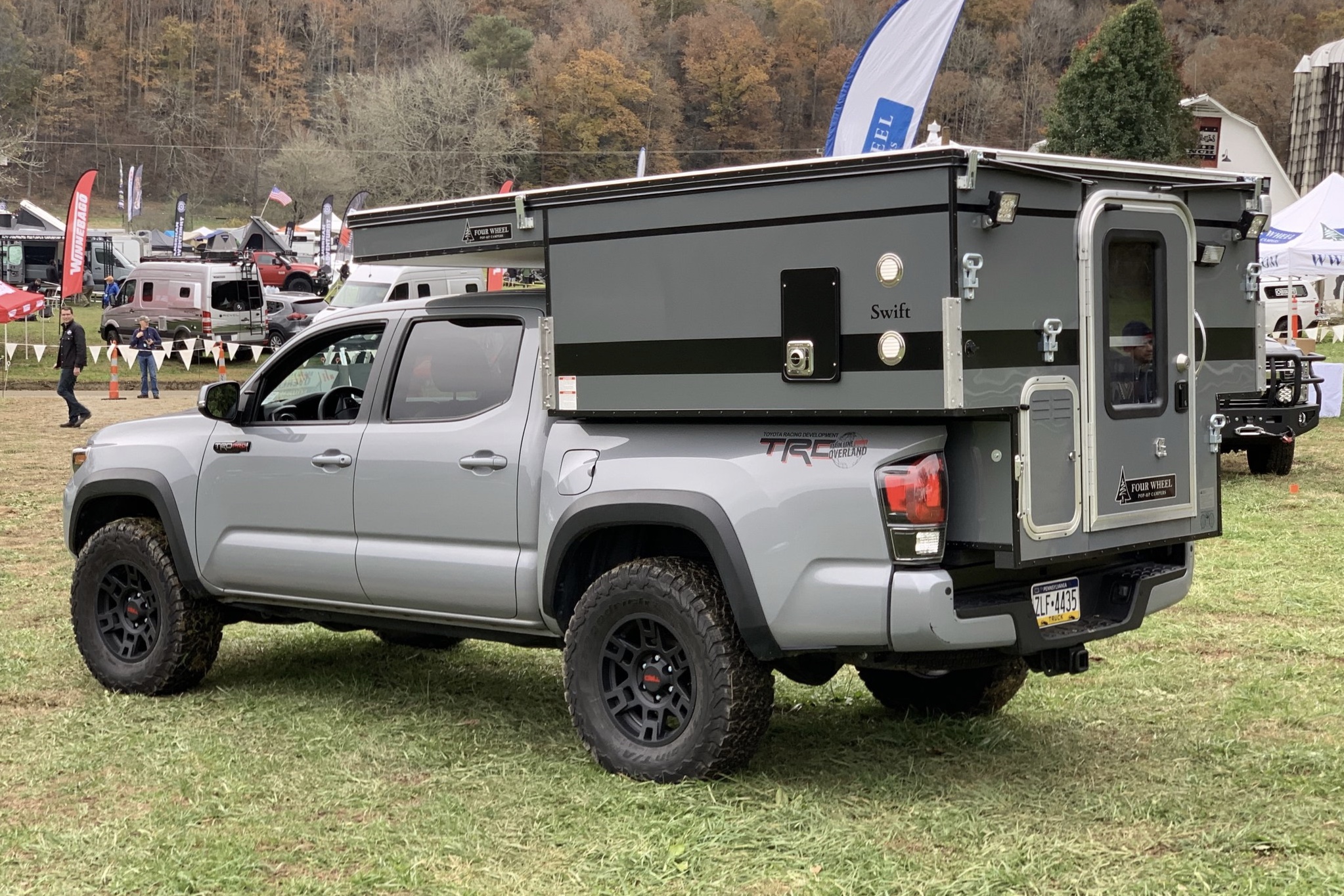 Four Wheel Pop Up Campers makes various size pop up models for all trucks from small trucks to huge full-size trucks like the 3500 and they even offer flat-bed models. In my opinion the ultimate overland rig would be a smaller truck like the Chevy Colorado or Toyota Tacoma equipped with either the Swift or Fleet Model pop-up that Four Wheel Pop Up Campers offers. Head over to YouTube to view my three-part series Sir William Goes To Death Valley for video of my journey and my walk around of the FWC Factory in Woodland, California. You can also follow me on Instagram @sirwilliamgoes.

About Sir William 1 Article
Sir William is an outdoor enthusiast who enjoys camping, overlanding, and 4x4 travel. He drives a Toyota 4Runnr and is still looking for the ultimate overland adventure setup. You can follow Sir William on Instagram and YouTube.

In celebration of Earth Day, Four Wheel Campers, in collaboration with Friends of Buenos Aires National Wildlife Refuge, will be hosting a two-day event on Friday April 22 and Saturday April 23, consisting of habitat [read more]