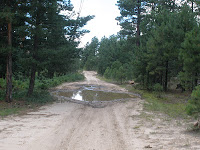 What is the Travel Management Rule (TMR)? The TMR is a series of rules that were put in place primarily to curb the damage caused to national forests by reckless Off-Highway Vehicles (OHV) owners. Unfortunately, the rules have also had a big impact on those of us who like to boondock. As a result, many forest roads that were previously open are now closed and distance restrictions on those roads that remain open are often now in place. In some national forests here in Arizona, dispersed camping is limited to within 300 ft of forest roads designated for dispersed camping and 30 ft from all other forest roads not designated as such. As of 2012, the TMR is now in place in all national forests.

The TMR (Title 36 CFR 212, Subpart B) requires that each national forest or ranger district designate those roads, trails, and areas open to motor vehicles. Designation will include class of vehicle and, if appropriate, time of year for motor vehicle use. Once the designation for that road or trail is complete, the rule will prohibit motor vehicle use off said road or trail. Tbe rule mandates that all designation decisions be made locally, with public input and in coordination with state, local, and tribal governments. Designations for those roads and trails that remain open will be shown on a motor vehicle use map free of charge to the public (click here for the US Forest Service’s online interactive map). Distance restrictions for parking and camping can also be imposed on those roads or trails that remain open.

How do I feel about the TMR? I’m torn. I can certainly see why the rules were needed. Too many OHV owners abused their rights and blazed new trails where none previously existed. Sure, budget cuts and the spreading of non-native plants played a role, but there’s little doubt that the main reason why the TMR was put in place had to do with reckless OHV use. Yes, something needed to be done, but the closures and restrictions that have been put in place in some national forests have reduced boondocking opportunities greatly. Once again a small, reckless minority ruined things for the law-abiding majority. It’s pretty sad.

Here are the results from a recent poll on this topic that simply asks, does the TMR goes too far in restricting public use? A total of 162 readers responded to the poll:

Camping Banned on Maine Mountain After Partiers Trash the Place

In what is becoming more and more of an occurrence on public land, park officials in the state of Maine are closing Tumbledown Mountain to informal camping, saying that overnight partiers have been trashing the [read more]

Truck Camper Adventure is proud to announce that we’ll be attending the 2017 Overland Expo WEST in Flagstaff, Arizona. The event will run from May 12-14, 2017. This will be the fourth time that Truck [read more]

Most of us who enjoy boondocking have been there at one time or another. You’re out relaxing and enjoying your favorite, secluded spot with your family and then it happens…Two trucks pulling toy haulers stop [read more]