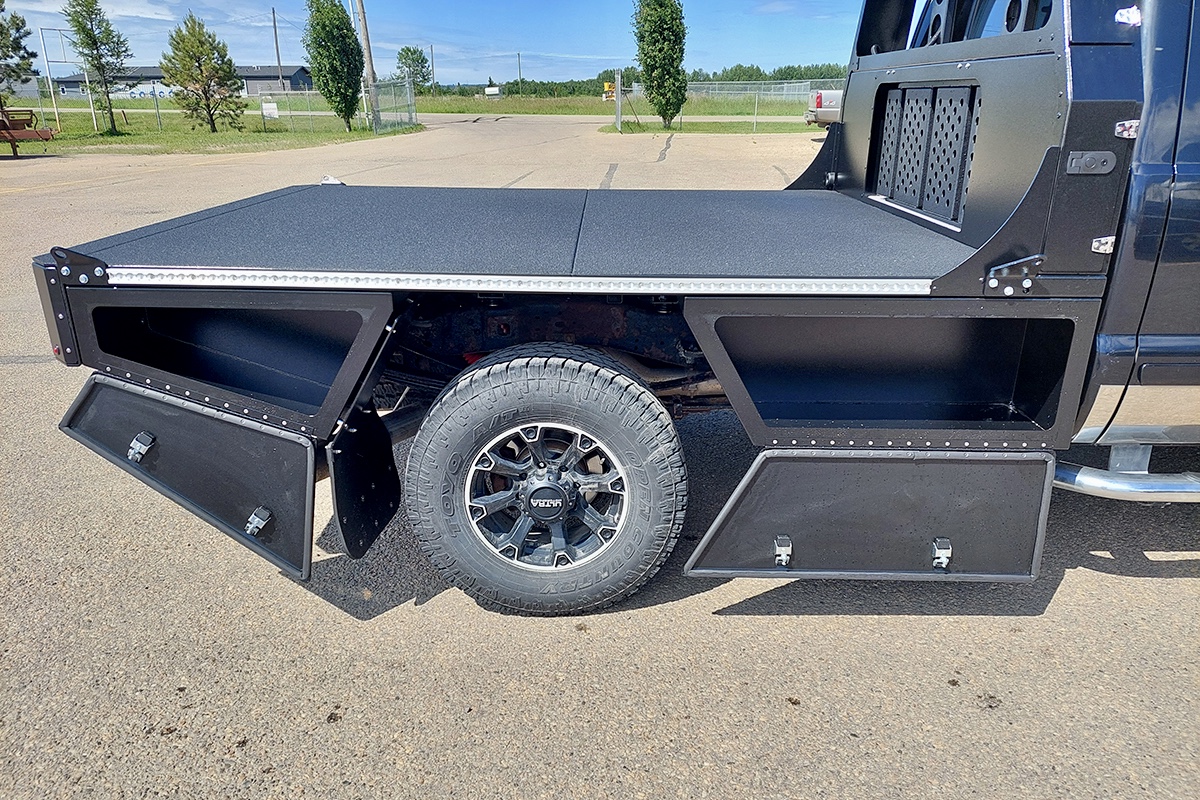 One complaint common with truck camper owners is the lack of storage. The reason for this deficiency is obvious. Compared to the massive motorhomes and fifth wheels seen rolling on today’s highways, truck campers simply lack the space for storage. One solution that is becoming increasingly popular with truck camper owners is to swap out the OEM truck bed with an aluminum tray or steel truck body with storage boxes. That this approach is catching on with truck camper owners would be an understatement. The proliferation of companies now offering bolt-on steel and aluminum trays and truck bodies provides ample evidence of that fact. One of the best of these trays is the so-called Aluma Tray by Overland Explorer Vehicles.

Truth be told, the staff at the Canadian-based company didn’t want to get into the truck bed aftermarket. It’s focus has been on building some of the finest, most durable truck campers in the industry, including the popular Camp-X and the Camp-HBE pop-ups. But a single request to build an aluminum tray with storage boxes for a Camp-X customer, changed everything. Once that tray was delivered and others saw it, requests for more began to pour in.

“The Aluma Tray really has taken a life all its own,” explained Arnold Baker, Manager and Founding Partner of Overland Explorer Vehicles. “After we developed the Aluma Tray for our Camp-Hudson Bay Edition flatbed campers, one customer encouraged us to build a tray with above tray storage boxes for the Camp-X. Once we did that, the popularity of the tray took off.”

The Aluma Tray is designed to be light weight, yet very utilitarian. Built for universal use, any truck camper can be mounted on the tray, including those made by Northern Lite, Hallmark, and Alaskan, though Baker was clear to point out that they will not offer any advice on which campers will or will not fit nor work on their trays. Options include tire carriers, under bed and above bed storage boxes, air compressors, and storage tanks through either the factory or one of OEV’s authorized US dealers. All trays come in an attractive powder-coated gloss black. 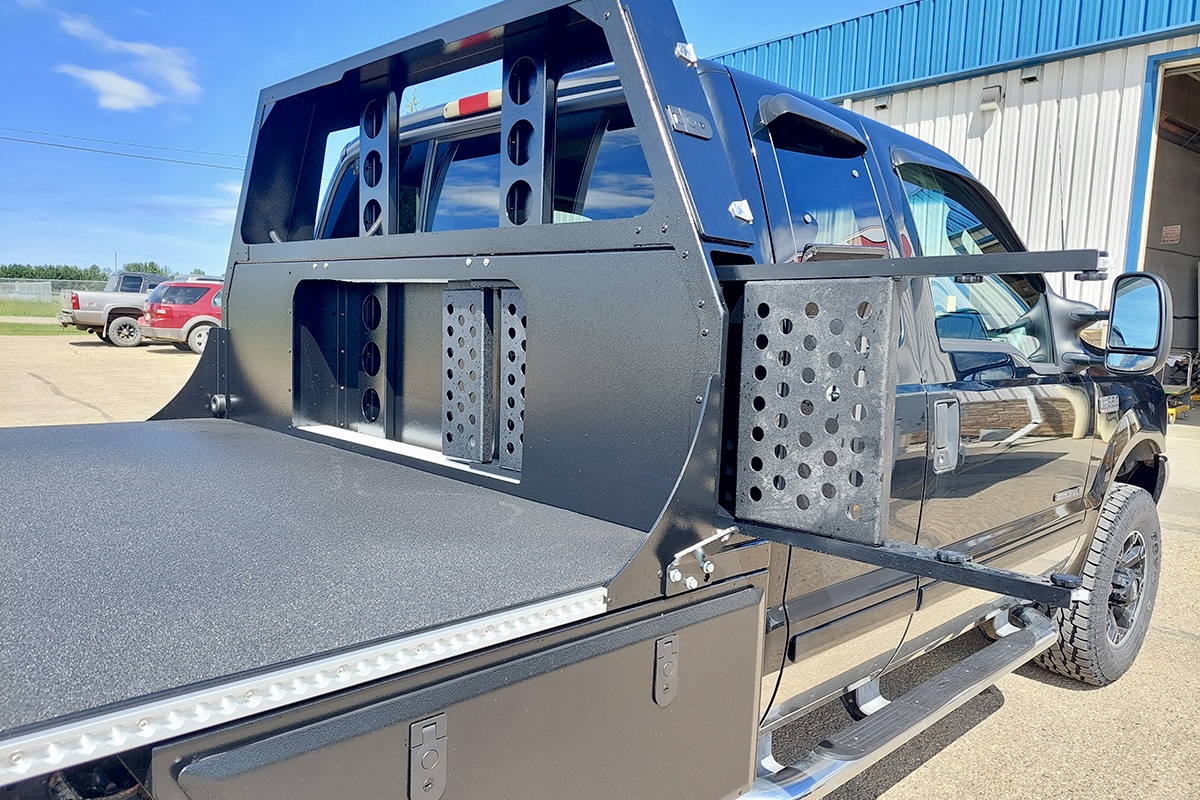 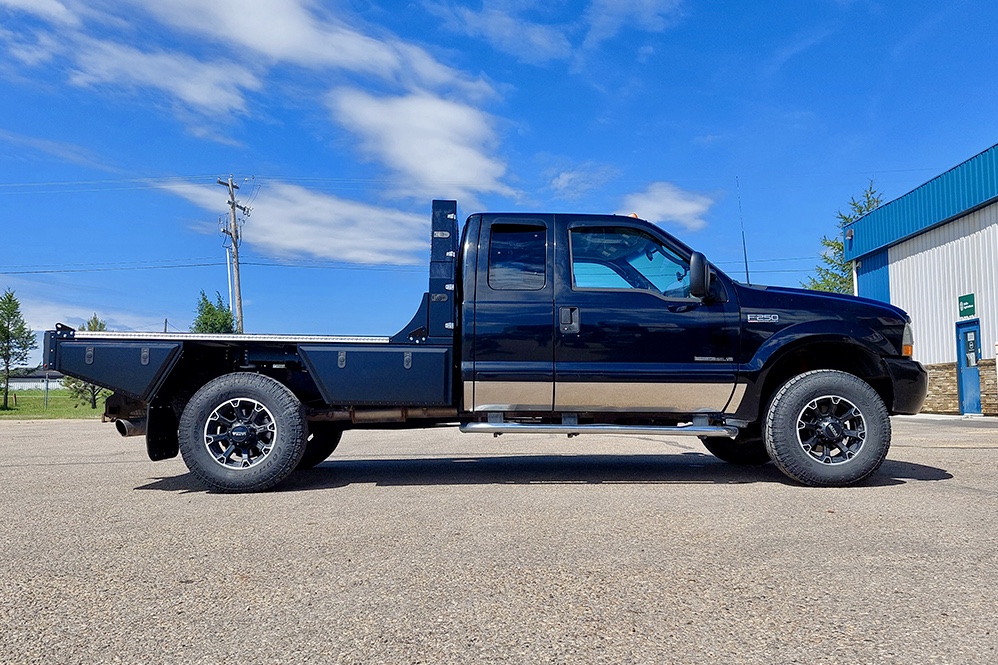 Overland Explorer Vehicles builds three sizes of aluminum trays: a 6.75-foot and an 8.5-foot tray for full-size trucks and a brand-new, heavy-duty tray for cab chassis trucks. The Aluma tray is incredibly light with the 6.75-foot model weighing only 660 pounds and the 8.5-foot model 760 pounds. Baker tells us that the payload rating for the standard tray is 3,000 pounds, while the new heavy-duty model, which is 9-feet 6-inches long, offers an impressive payload of 4,000 pounds.

Fortunately, if you’re interested in ordering one, you won’t have to wait long. The backlog is only eight weeks long from the time of order, not including freight and install time. If you’re thinking about ordering one, though, we wouldn’t wait. Overland Explorer Vehicles will be unveiling a new Camp-X flatbed camper at the 2022 Overland Expo West in May. With the anticipated popularity of that camper, corresponding orders for the Aluma Tray will surely increase.

“The Aluma Tray is a really good looking tray, but that’s not why we build it, we build our trays strong. Our boxy campers aren’t the most attractive campers in the industry, but one thing they are is incredibly strong. And with our background building tray decks for the energy service trucks in Alberta for many years prior to entering the recreational space, we were positioned to do well building aluminum trays for our campers,” Baker said. 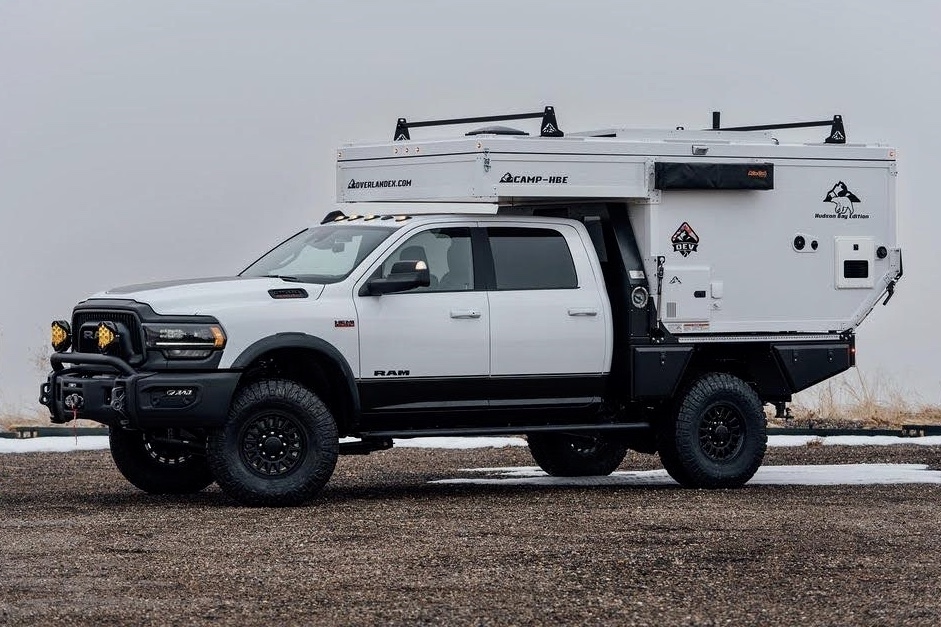 An alarming trend has recently taken place in the truck camper industry. Many manufacturers are now building multiple slide-out campers–one model has as many as four–weighing in excess of 6,000 pounds. In the mind of [read more]

There’s no doubt about it. Living full-time in a truck camper is now more popular than ever. Thousands are migrating from ponderous RVs to truck camper life. Lindsey, who goes by the moniker “Girl Gone [read more]

How Fast is a Tuned and Lifted Silverado?

PAOLI, Pennsylvania (January 9th, 2019) – In this episode of AmericanTrucks’ (AT) “The Haul”, Adam Maqboul installs a trio of bolt-on modifications to his 2016 Silverado LT equipped with 33-inch all-terrain tires and a 6-inch [read more]