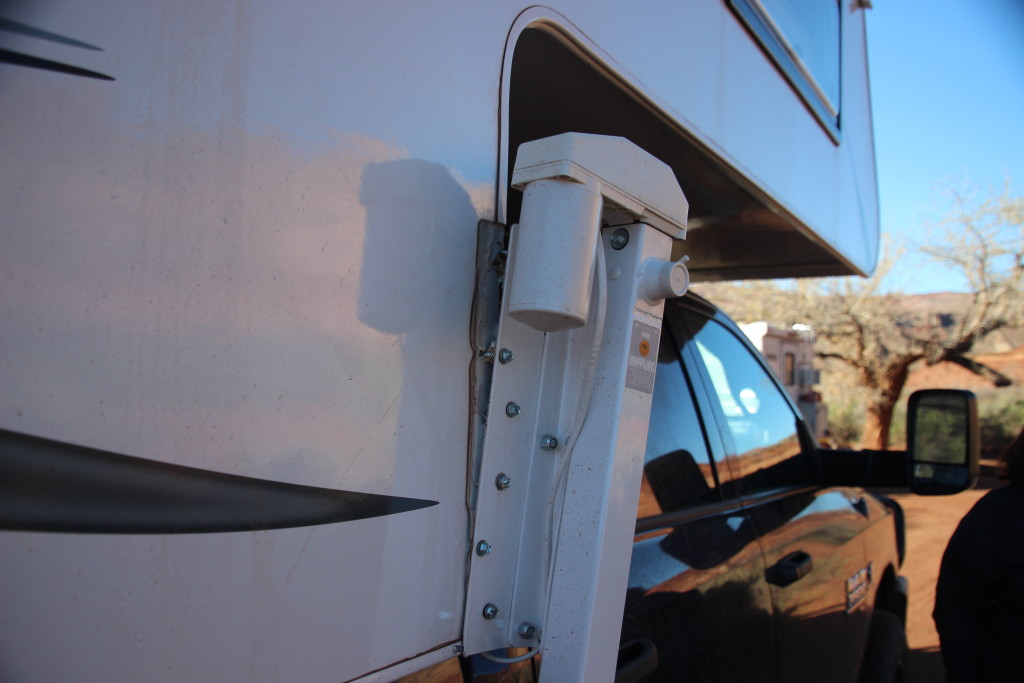 Ignore the advice, pay the price. This isn’t always the case, but it was for me during a recent three-day trek on the White Rim Trail at Canyonlands National Park. I’d been advised by the expedition leader to remove my four camper jacks at the beginning of the trip, but I ignored his advice. I thought that if I was careful enough and navigated slowly over obstacles and V-dips that I could avoid any mishaps or damage. I came close to being right. I had driven for over two days and nearly 70 miles and had zero incidents up to that point, but like they say, being close only counts in horseshoes and hand grenades. All of that came to an end on the morning of the third day when our small group was traveling on the backside of the Hardscrabble switchbacks. While negotiating a narrow stretch of road along a steep cliff my front passenger tie down and camper jack snagged a large rock along the side of the road. We knew from the sound of the loud crash that the damage to the truck and camper wasn’t good.

A survey of our rig at the bottom of the Hardscrabble revealed the damage. The impact with the rock caused the aluminum Talon receiver to split in two at the weld. This, in turn, caused the Fastgun turnbuckle to dig into the side of the truck which created a small dent and removal of some paint. At first glance, the damage to the Happijac mount and jack looked just as bad, but it wasn’t. The mounting plates for the jack were bent and twisted and partially removed, but there didn’t appear to be any damage to either the jack or to the camper’s frame. Only the top lag screws to the mounting plates had been pulled out along with superficial amounts of wood. During the eight-hour trip back home I kept thinking that we were lucky, that the damage to our camper could’ve been a lot worse. Still, I wanted an expert’s assessment on the damage and what I needed to do to correct it.

A photo and email exchange with the owner of Northstar Campers, Rex Willet, confirmed that no structural damage had occurred to the camper and that this would be a relatively easy fix. This was a great relief. I knew that having a wood frame camper had its benefits, but I never imagined it would come into play quite like this and so soon after purchasing it. For this particular impact having a wood framed camper was a very good thing. Only the top lag screws, which were 1.25 inches long, were pulled out. No damage to the frame had occurred. Better yet, Rex’s shopping list and instructions to repair the damage were pretty simple: purchase a roll of putty tape, new Happijac mounting plates, six 3-inch lag screws with metal and rubber washers, then reinstall everything. In addition to these items, I also purchased some wood putty to fill in the stripped out screw holes and to fill in the tiny gaps from the splinters of wood that had been pulled out when the collision had occurred.

Installing the new Happijac mounting brackets to my camper proved to be incredibly easy. The 3-inch lag screws worked like a charm biting into the remaining wood frame structure (the same diameter lag screws were used and no pre-drilling was necessary). It’s important to note here that only the rows of screws closest to the corner were replaced with the longer, 3-inch lag screws (installing 3 inch lag screws in the outer holes would penetrate the 1.5-inch-thick walls, so the original screws were retained for these mounting holes). The 3-inch lag screws now provide an even stronger bond with the camper than those that were previously used. I have to admit that I was a little skeptical when I was told how easy of a fix this would be, but Rex was right. It took a little over an hour to bolt the new brackets to the camper and to re-attach the jack. Everything looks and works as good as new.

So what’s the moral of the story? Remove your jacks when going off-road, especially on difficult trails like the White Rim Trail. It only takes only a few minutes to remove them and in the end you’ll feel better knowing that they aren’t there to get in the way. For an experienced guy like myself I should’ve known better than to tempt fate like I did, especially when my front jacks were mounted on fixed 2-inch extender brackets. I’m pretty sure that my jack sticking out an extra 2-inches played a role in this incident. Experienced guys will tell you that when you’re exploring trails like the White Rim Trail every inch matters.

Is there anything else to learn from this incident? You bet! Wood frame campers are easier to repair than aluminum frame campers. Can you imagine this repair if my camper had an aluminum frame rather than a wood one? It would’ve been ugly. Wood frame campers also hold up better when driving off-road, especially those built by Northstar. Beefy 1x4s are used along the edges and all cabinets and walls are glued and screwed from the outside-in and together on the inside at every junction. All cabinets and walls are also screwed to the floor or wing and perimeter roof screwed before the hung wall is glued. All of these measures produce a camper with an obscene amount of strength that doesn’t flex. So if you’re hesitant buying a wood frame truck camper, you really shouldn’t. As this incident clearly demonstrates, wood frame campers are easier to work on and repair. They’re also stronger, warmer, insulate better, and don’t sweat during big temperature changes like aluminum frame campers are prone to do. The key, of course, is regular maintenance to keep the camper watertight.

Truck campers are a hot commodity in 2021 with truck camper manufacturers reporting record sales. For non-slide-out campers, the Lance 825, Northstar Laredo SC, and Bundutec Roadrunner are among the most popular. These campers sell [read more]

Truck Camper Adventure is proud to present this interview with Nolan Sturgeon. Known on the truck camper forums as “Anutami,” Nolan works as a regional sales manager for a plumbing manufacturer and currently makes San [read more]