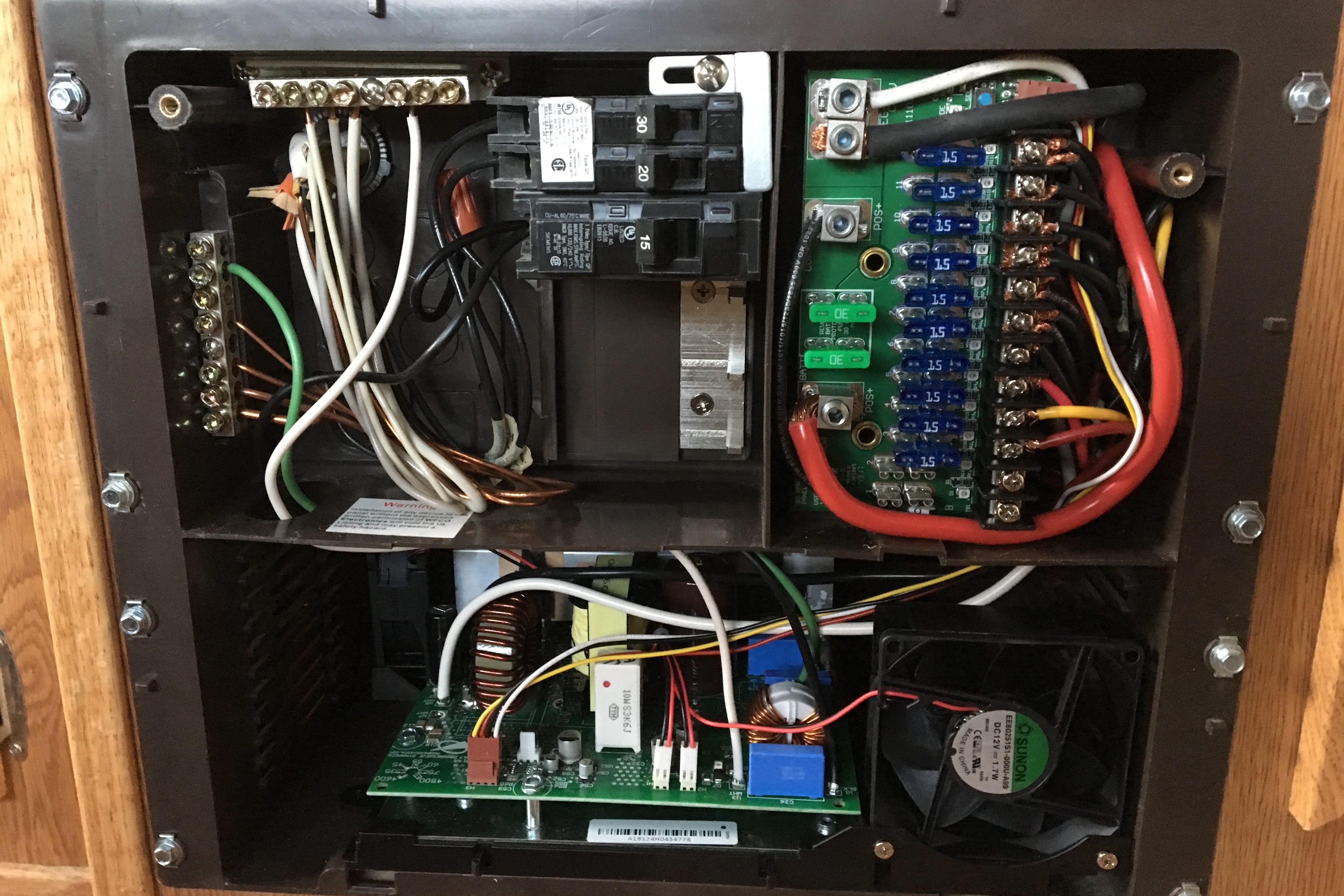 It’s really unfortunate. The standard converter-charger installed in most RVs and truck campers is pretty poor. Many campers get the basic WFCO 8945PEC 45 amp Power Center like the one that’s in our Northstar Laredo. I wouldn’t complain if the unit’s converter-charger ever put out a bulk charge approaching 45 amps and 14.4 volts. The problem is it rarely does. In fact, I’ve never seen it. The most I’ve ever seen put out by the unit is 7 amps and 13.6 volts, even when running very few loads. The problem with WFCO’s low amp/low volt converter-charger output is that if you have a pair of severely depleted batteries, it will take over 24 hours to recharge them. If you’re camping off-grid and running a generator that’s an unacceptable amount of time. Even worse, this Chinese-made converter-charger will boil your wet cell batteries dry if you leave it connected to your batteries over a long period of time. If you’re running expensive, new batteries, this can cost you a lot of money. This is a Review of the Progressive Dynamics 4645V RV Converter-Charger.

Fortunately, there’s a quick and easy solution to the problem. Progressive Dynamics manufactures and sells a complete line of American-made, 35, 45, and 55 amp direct replacement converter-chargers for campers equipped with Magnetek, Parallax, and WFCO Power Centers. For the WFCO 8945PEC unit in my truck camper, I bought one of the best smart chargers in the market, the Progressive Dynamics 4645V. This 45 amp model, designed especially to charge wet cell and AGM batteries, measures 13.25 inches wide x 8 inches deep x 5.38 inches high and mounts in the lower section of the aforementioned OEM power centers. This converter-charger has the same impressive quality, performance, reliability and multi-patented features as those found in Progressive Dynamics’ popular 9245 model. The best price I could find online for the Progressive Dynamics Inteli-Power 4645v RV Converter-Charger was $201 on Amazon.com.

What features does the Progressive Dynamics Inteli-Power 4645V offer? First and foremost it comes with the company’s patented Charge Wizard microprocessor-controlled system that constantly monitors the battery’s voltage to ensure a rapid, yet safe, recharge. The Charge Wizard does this by selecting one of three charging voltages and one of four charge/operating modes—boost (14.4 volts), normal (13.6 volts), storage (13.2 volts), and desulfation (14.4 volts)—depending on the state of the batteries. Like all Progressive Dynamics converter-chargers, the 4645V also features electronic current limiting, reverse battery protection, high voltage protection, low voltage operation, and over temperature shut down. The 4645V even comes with an upgraded DC fuse board with a Charge Wizard control button to manually change the charging mode. Note: the standard 4645V is made for lead-acid batteries only. If you have lithium-ion batteries you’ll need to order the 4645VL model instead, which puts out a boost charge of 14.6 volts.

Truth be told, I originally intended to install Progressive Dynamics Intel-Power 9245 Converter-Charger in my camper. This is probably the company’s most popular model, but has its limitations due to its slightly larger, box-shape size. Unfortunately, it doesn’t fit in the lower bay of many power centers, including my WFCO 8945PEC. In order to install it, I would’ve needed to mount it underneath the kitchen sink, taking up valuable storage space and subjecting it to possible moisture. Sure, I could’ve cut away parts of the power center’s bottom to make the 9245 fit, like some RV owners have done, but this wasn’t an option that appealed to me either. The best and easiest way to get the benefits of a Progressive Dynamics converter-charger without the hassles associated of either cutting or remounting in another location is to go with a direct replacement, “plug and play” model like the Progressive Dynamics 4645V Converter-Charger.

Overall, the installation of the Progressive Dynamics 4645V was fairly easy. The unit, as boxed, comes with the 4645v converter-charger, a replacement DC fuse board, a plastic mounting bracket, and a four-pin wiring harness. Even though the installation instructions say that only a licensed electrician or certified RV technician should install this unit, anyone with a good understanding of electricity and electronics can safely install it. If you have any doubts about your electrical knowledge and abilities, however, you should hire out the job. Better to be safe than sorry when working with high voltage equipment and circuits. The Progressive Dynamics 4645V is a direct replacement for the converter-chargers found in the Parallax/Magnetek model 6345, the Parallax model 7345, and the WFCO model 8945 power centers. For the job, you’ll need a 5/32-inch hex driver, a small, flat-bladed screw driver, a socket wrench with a small 7/32-inch socket, wire cutters, and a good set wire strippers.

Every job has preliminaries and this job’s no different. Before you start, make sure you disconnect your camper from 110 volt shore power and disconnect your batteries. THIS IS IMPORTANT. This ensures that no voltage is present during the installation. If you have a WFCO power center in your camper, you’ll also need to remove the aluminum enclosure from the 4645V converter-charger by removing the four 7/32-inch hex screws attached to the bottom of the assembly. Once these two preliminary steps are done, you can begin the installation.

The first part of the installation involves removal of the OEM unit, which is a pretty simple task. On the AC side you’ll need to disconnect the neutral (white) and  ground (green) feed wires from the distribution blocks and the hot wire (black) from the AC branch breaker. On the DC side, you’ll also need to disconnect the converter-charger positive (black) and converter negative (white) wires. Next, remove the battery positive wire from the OEM fuse board and reconnect it to the “BATT POS+” terminal on the new DC fuse board, then connect the negative battery wire to the “BATT NEG-” terminal. Secure the new DC board to the power center, then transfer the individual branch circuit wiring and fuses from the OEM board to the new one. The last step requires removal of the bottom two screws securing the OEM converter-charger assembly to the power center and removal of the OEM converter-charger assembly.

Perhaps the best feature about the unit is the Mode Select Button located near the top of the DC board. This button gives you the ability to put the unit in the boost/bulk mode manually. Unfortunately, getting to the control button on an WFCO power center is difficult because the DC cutout isn’t high enough to reach the button. I drilled a tiny hole in the WFCO cover so I can access the button with a toothpick, but using a Progressive Dynamics 4600 Series WildKat Remote Pendant is a much better workaround. The pendant connects directly to the converter-charger by bypassing the control button on the DC fuse board and allows you to control the unit remotely. Unfortunately, the WildKat pendant isn’t included in the standard 4600 series installation kit and is a Progressive Dynamics special order item available only through Best Converter. In my opinion, this is a big omission, but I suppose the standard control button on the DC fuse board will be more than sufficient for those who own Parallex and Magnetek Power Centers.

Another great feature of the Progressive Dynamics 4645V Converter-Charger—and all Progressive Dynamics converter-chargers for that matter—is the unit’s Desulfation Mode. This mode is only active when the Charge Wizard is in the Storage Mode. During this mode a timer in the micro-processor automatically switches the Charge Wizard to the Boost Mode for 15 minutes every 21 hours. This higher voltage causes some slight gassing in wet cell batteries, and mixes up the battery electrolyte to prevent battery stratification, and the resulting sulfation of the plates, which is the leading cause of battery degradation.

The quality of the Progressive Dynamics Inteli-Power 4645V Converter-Charger is outstanding. The unit’s Charge Wizard quickly and efficiently charges both of my AGM batteries and runs all of the 12 volt circuits in my camper when the batteries are disconnected. At first I was disappointed to see the smaller, 10 AWG feed wires on the DC side of the unit (the WFCO OEM converter-charger uses 8 AWG wires for both connections), but due to the very short wiring run to the DC fuse panel the smaller feed wires haven’t been an issue at all. On the plus side, the Progressive Dynamics converter-charger comes with two 12 volt fans, rather than one, which keeps the unit cooler, and has an upgraded 12 volt fuse panel with three additional branch circuits for future expansion (two of the branches are for low amp circuits like CO detectors). The only real negative with the Progressive Dynamics upgrade is with the inaccessible control button on the DC fuse board, but as I mentioned, there is an excellent workaround available to mitigate this issue.

Overall, we’re thrilled with how well the Progressive Dynamics 4645V Converter-Charger works in our truck camper. If you haven’t done this modification yet, we highly recommend it. Without a doubt, it’s a top 10 RV modification, one of the best mods you can make to your camper. Not only is the Progressive Dynamics 4645V an outstanding smart charger, but it’s also made in the USA, which leads me to another point. This equipment really should be OEM in all American-made RVs. It’s a shame that RV manufacturers here in the United States resort to putting substandard, foreign-made junk in their RVs to safe a few bucks. Progressive Dynamics manufacturers and sells a complete line of excellent power centers for both lead-acid and lithium-ion batteries, so there’s no excuse going with a foreign-made model. What would we rate the Progressive Dynamics Inteli-Power 4645V RV Converter-Charger? On a scale of 1 to 5 with 1 being the lowest and 5 being the highest, we enthusiastically give it a rating of 5 stars.

About Mello Mike 746 Articles
Mello Mike is an Arizona native, author, and the founder of Truck Camper Adventure. He's been RV'ing since 2002, is a certified RVIA Level 1 RV Technician, and has restored several Airstream travel trailers. A communications expert and licensed ham radio operator, he retired from the U.S. Navy in 2004 as a CWO3 after 24 years, worked in project management, and now runs Truck Camper Adventure full-time. He also does some RV consulting, repairs, and inspections on the side. He currently rolls in a 4WD Ram 3500 outfitted with a SherpTek truck bed with a Bundutec Roadrunner mounted on top. - KK7TCA
Website Instagram YouTube

Review of the Expion360 VPR 4Ever Platinum 360 Lithium Cube Battery

The lithium battery has revolutionized the 12 volt electrical system in today’s recreational vehicle, especially for those who like to boondock. The reasons are simple. Not only does the lithium battery provide a nearly 100 [read more]

Going lithium is all the rage for those who like to boondock in their RV. Not only does the lithium battery offer a more usable battery capacity at 90 percent (compared to 50 percent for [read more]