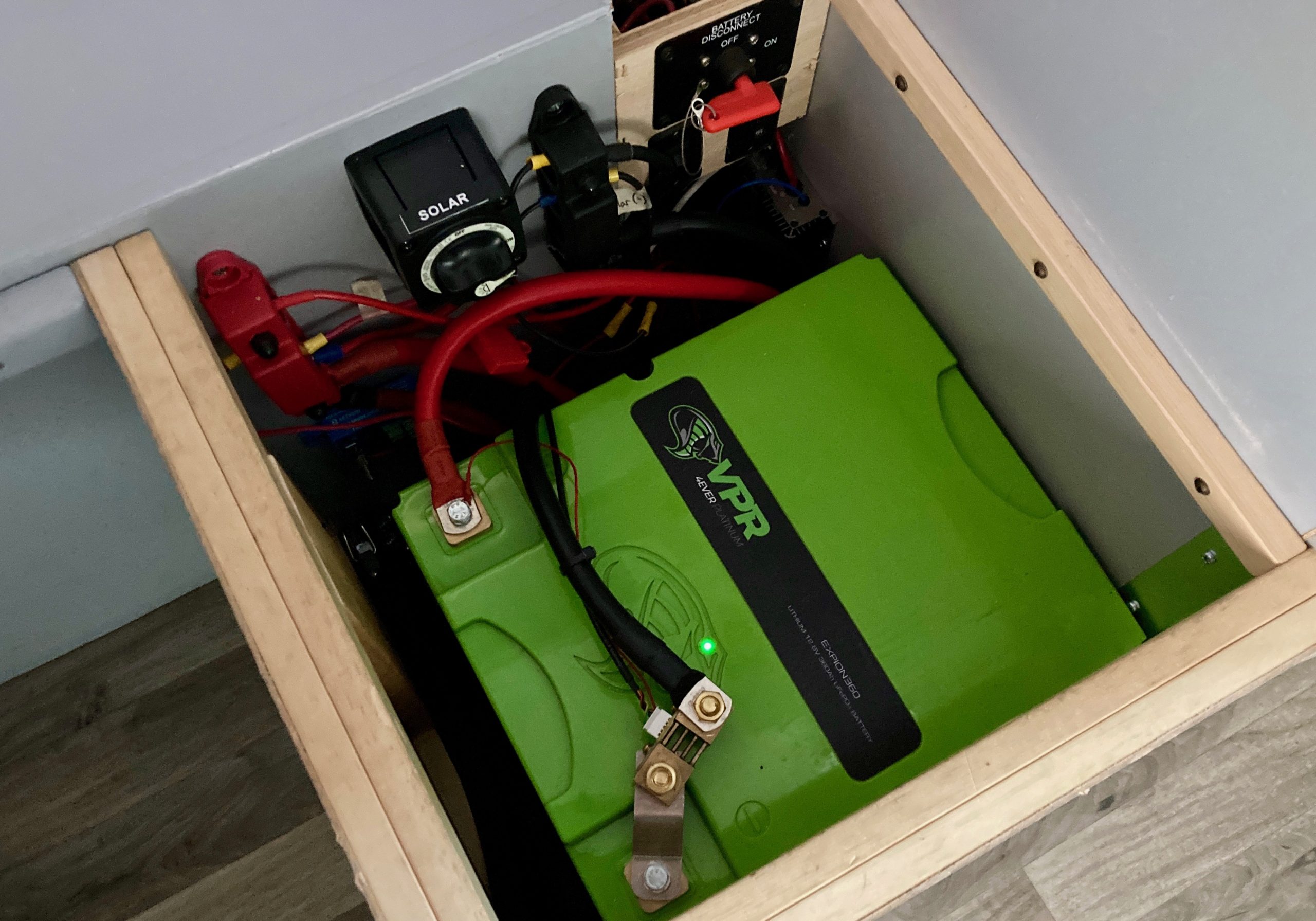 The lithium battery has revolutionized the 12 volt electrical system in today’s recreational vehicle, especially for those who like to boondock. The reasons are simple. Not only does the lithium battery provide a nearly 100 percent usable capacity (compared to an AGM lead-acid battery that provides only 50 percent), but it also weighs half as much as an AGM. Not only that, but lithium provides a greater current and voltage output, and can also be charged faster because it can be bulked charged to 97 percent. Moreover, the Lithium Iron Phosphate (LiFePO4) chemistry, now used in most RV lithium batteries, offers greater dependability and safety compared to the basic lithium-ion battery chemistry, which can sometimes catch fire when overcharged or when other problems occur. The only real negatives with lithium are the cost—a lithium battery costs three to four times more than a standard AGM battery—and the fact that the lithium battery can’t be charged below 32F. This is a review of the Expion360 VPR 4Ever Platinum 360 Lithium Cube Battery, hereafter referred to as the “Expion360 Cube” or “Cube” for short.

All things considered, it’s amazing that the lead-acid battery has existed in the RV marketplace for so long. It charges slowly, stores relatively little power, has a relatively short life span, and needs a full charge to prevent sulfation. It’s also heavier than lithium, is hamstrung by Peukert’s Law (meaning as the rate of discharge increases, the battery’s available capacity decreases), and suffers from voltage sag (at 50 percent the lead-acid voltage typically drops to 11.9 volts). Due to limited space, truck camper battery compartments are typically limited to no more than two group-27 lead-acid batteries. Even though the typical group-27 battery is rated at 100 amp hours, you’ll need two to actually get that much usable capacity because only 50 percent of each battery is usable. Still, two batteries isn’t enough for some campers. For those needing to run a high-amperage load, like a microwave, hair dryer, or an induction cooktop, this usually means one thing—running a generator… until now. Enter the Expion360 Cube. Coupled with a 3,000 watt inverter this powerful battery can power practically anything in your RV, including an air conditioner, for a significant amount of time.

Manufactured by Expion360 out of Redmond, Oregon, the Expion360 Cube is the company’s latest product. It measures only 13×15 x10 inches and is the smallest 360 amp hours lithium battery in the market. How is Expion360 able to pack so much power into such a small case? By using 2650 high density, 4,000 milliamp hour cells. Simply put, these higher density cells offer more power than the standard density cell found in other makes of batteries. Putting these higher density cells into a single battery box also means more space for more cells. To give you an idea of how special this lithium battery truly is, the usable capacity of the Expion360 Cube nearly equals three 8D AGM batteries that provide only 382.5 amp hours of total usable capacity. Worse yet, each 255 amp hour 8D battery weighs 156 pounds and measures 20x10x8 inches. Ten years ago only massive rigs made by EarthRoamer and GXV Adventure Truck could accommodate so many batteries and the corresponding amp hours. With the Expion360 Cube, many of today’s truck campers now can.

Yet, the Expion360 Cube has other things going for it as well. Unlike other makes, the Cube features a removable and serviceable “smart” battery management system (BMS). In the long run, this can save owners significantly in battery maintenance and replacement costs. Moreover, while other makes may overlook the importance of structurally securing the BMS board, Expion360’s process incorporates a bolted design that creates one cohesive pack. The addition of terminal connections and an oversized heatsink increase, the reliability of the Expion’s BMS will provide many years of trouble-free performance.

Fortunately, the BMS features a low-temp discharge and auto-shutoff to prevent charging in freezing temperatures. The battery, of course, can still be used in freezing temperatures (as low a -4F, according to Expion360), but can’t be charged below 32F. The temperature shutoff features inside the battery are controlled internally through a microprocessor in the BMS, which receives data through a temperature probe in the battery pack. Low and high voltage cutouts, short circuit protection, and over-current disconnect are also managed by Expion360’s BMS.

But that’s not all. The case featured in every Expion360 VPR 4Ever battery incorporates a number of enhancements. The battery case is strengthened with molded ribs rather than a foam filler that is found in most of the competition. Moreover, Expion360 uses only the highest-grade ABS plastics and infuse 10 percent glass fill into the military-grade battery case that meet UL-94 VO for fire retardant rating. Expion’s battery box is also the first in the industry to feature rubber feet. This feature greatly reduces vibration and sliding issues found in typical mobile installations. Radiused corners heighten the appearance and strengthen the edges for a sleek and sophisticated profile. Each case also features “polarity pads,” which are 96.7 percent larger than standard polarity terminals. This forward-thinking approach to battery design increases the strength and structural integrity by allowing better heat dissipation and a 19 percent increase in current carrying capacity.

Three methods can be used to charge the Expion360 Cube in your RV: solar power, a DC to DC charger, or a converter-charger using either shore power or a generator as the source of power. All of the battery chargers in your rig should have a “LiFePO4” setting or be made specifically for lithium, which requires 14.6 volts to fully charge and balance. While its true that any voltage between 13.6 volts and 14.4 volts can be used to charge lithium, 14.6 volts is ideal and needs to happen in order to engage the balancing mechanisms in each battery.

With regard to the charging profile used by lithium, there are some important differences as well. The lead-acid battery requires three main charging stages to properly charge—bulk, absorption, and float. Lead-acid needs an equalization and maintenance stage to prevent sulfation as well. Not so with lithium, which requires only two stages, a bulk charge up to approximately 97 percent SOC, and a tiny absorption charge for 10 to 15 minutes for the remaining 3 percent SOC. Because lithium doesn’t sulfate the additional float and equalization stages aren’t needed.

Yet, when it comes to charging, lithium has another important difference from lead-acid—the practice of keeping lithium topped-off at 100 percent SOC. You simply shouldn’t do it. Like humans, the lithium battery doesn’t like constant, never-ending stress, in this case the kind of stress caused by changes in ambient temperatures while stored at 100 percent SOC. As a matter of fact, Expion360 recommends an optimum state of charge (SOC) between 40 to 80 percent SOC or when the battery’s open circuit voltage is approximately 13.1 volts. Unlike lead-acid, the monthly self-discharge rate of the lithium battery is a meager 1 to 2 percent and experiences no “health” issues when receiving a partial charge or when being stored less than fully charged.

The Expion360 Cube delivers power in a “big” way. Our previous Expion360 installation consisted of two 120 amp hour group-24 VPR PowerMod batteries. These two batteries also featured 2650 high density LiFePO4 cells, but with the limited space under our dinette seat, we only had room for two group-24 batteries. The same compartment, however, can accommodate an Expion360 Cube. This now gives our camper a 360 amp hour battery bank vice a 240 amp hour battery bank, a 50 percent increase in total capacity.

So how well has the Expion360 Cube held up in the 15 months we’ve owned it? Better than expected. We’ve used it in temperatures as high as 115 degrees and as low as 20 degrees unless all kinds of loads and conditions. With a Xantrex 3,000 watt inverter, the battery provides enough juice to run an 1,800 watt induction cooktop and a Truma Aventa Eco 13.5k air conditioner for two to three hours a day. This has been a game-changer for us. We’ve never had this kind of power before and it really is terrific. Imagine traveling in 100-degree temperatures and being able to stop for a few hours for lunch and a nap. We do it all the time now with the Expion360 Cube. The bulk charging capability of the Expion360 Cube is great too. In full sun, we can recharge the battery with a 55 percent SOC in six hours using our 500 watt solar power system, even faster with our two SolarSaga 100 portable’s deployed.

So what happens if you happen to accidentally discharge the battery to zero percent? Fortunately, not much. The BMS has a built-in feature to disable the battery at 9.2 volts before permanent damage can occur to the battery. Activating the battery when his occurs is simple too. All you need to do is apply a 12 volt charge momentarily to the terminals to “wake” the battery up from its sleep.

Are there any cons associated with Expion360 Cube? Just a few. First, the price for this beast is pretty high at $3,900 a pop through some outlets like Camping World. Second, at 95 pounds the battery is heavy. It’s best to have two people to carry this beast around. Fortunately, the battery comes with proprietary straps to make lifting the battery easier. Still, when you consider the weight of a 156-pound AGM 8D battery, and that you need three 8D batteries to equal the Expion360 Cube, Expion360 Cube is much easier to lift and haul around in your truck camper. Are there any other cons? Just one, though it’s relatively minor. While the Expion360 offers 360 amp hours in the small footprint, the battery is still too large for many truck camper battery compartments that can hold only one or two group-27 batteries. This means only truck campers with dinette battery compartments, like in our camper, or a large truck camper with a large basement, like those made by Host Campers, can accommodate one or more Cubes.

The lithium battery has revolutionized boondocking in today’s RV. It’s impact on truck campers and vans has been even more profound. Truck campers and vans lack the space and often have to deal with weight restrictions. The lithium battery solves both problems by providing twice the usable capacity and by weighing half as much. Better yet, the Expion360 VPR 4Ever Platinum 360 Cube offers even more with the amp hour capacity than three 100 amp hour group-27 lithium batteries with a footprint of only 2.5 times the size. There’s a reason why so many RV manufacturers now use this battery as OEM. There simply isn’t a better battery for today’s recreational vehicle. What would we rate the Expion360 VPR 4Ever Platinum 360 Cube? On a scale of 1 to 5 with 1 being the lowest and five the highest, we give the battery a resounding 5 stars. It’s a game-changer. 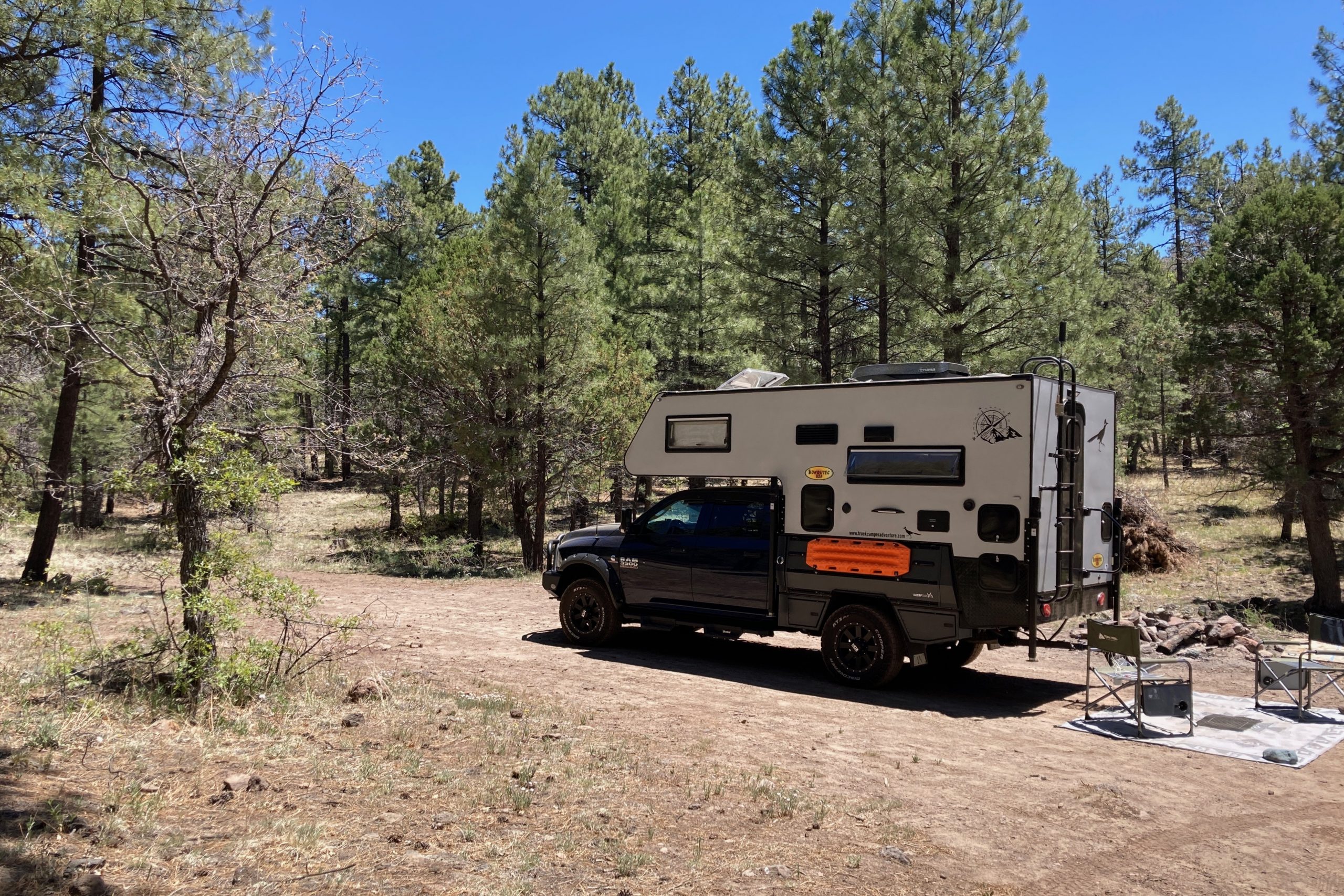 Our friends at Four Wheel Campers just released a portable power solution for their popular Project M truck topper. According to the company, the new power box comes with several features including a 750 watt [read more]

If you’re interested in adding solar-power to your truck camper rig, you’ll want to check out this video of Mello Mike’s 340 watt solar power system. His system isn’t the largest found in a truck [read more]