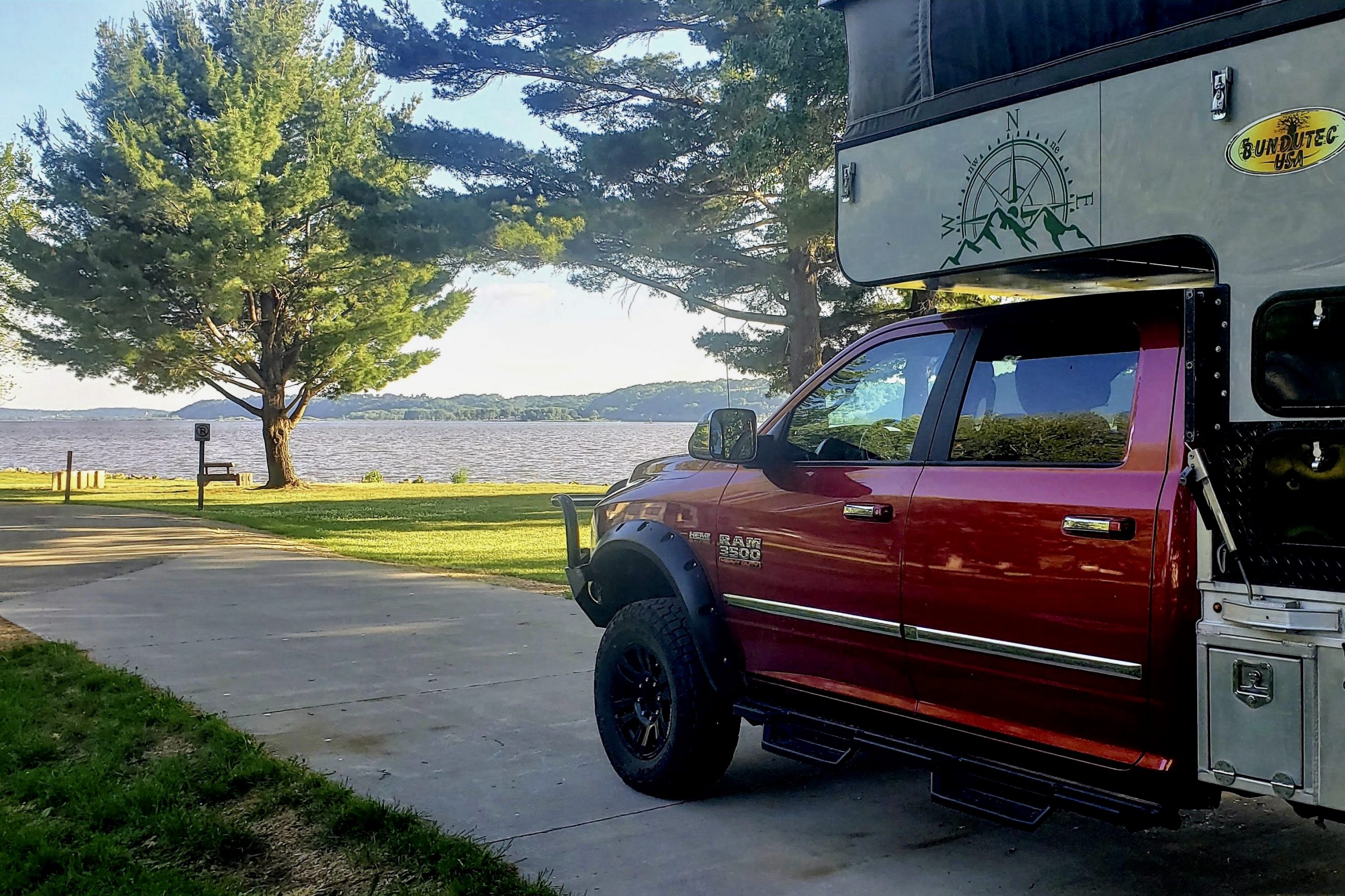 The American West has vast amounts of public land offering almost unlimited opportunities to explore off road often with free camping. Iconic trails such as the White Rim, Mojave Road, Bradshaw, Camino del Diablo, Moab, and the Rubicon (to name a few) offer access to spectacular scenery and challenging driving conditions. As one travels eastward across the United States however, public land becomes less and less common and on the east coast, virtually non-existent. However, that doesn’t mean that there are no opportunities to explore and thanks to our friends in the dual sport motorcycle world, many states have routes that traverse some of their best landscapes. The granddaddy of them all is the Trans America Trail that uses public roads to cross the country from the Atlantic to the Pacific, the majority of which is on unpaved roads. I’ve driven the TAT from Oklahoma to Virginia in a truck camper and it was an amazing journey into the depths of rural America.

Closer to home, the Trans Wisconsin Trail (TWT) was initially designed for dual-sport motorcycles, but can easily be driven by any street legal vehicle (high clearance and 4WD are recommended), and GPS files can be downloaded at no cost. From the southern Wisconsin border near Galena, Illinois, the TWT runs 600 plus miles north, ending near Cornucopia, Wisconsin on Lake Superior. The route is approximately 50 percent pavement, 40 percent gravel and 10 percent dirt/sand and initially follows the Mississippi River north with a detour into Iowa across the hilly Driftless Region. Once you reach the central part of Wisconsin, the terrain becomes flatter, and the route passes through miles of forest land before arriving on the shores of Lake Superior. 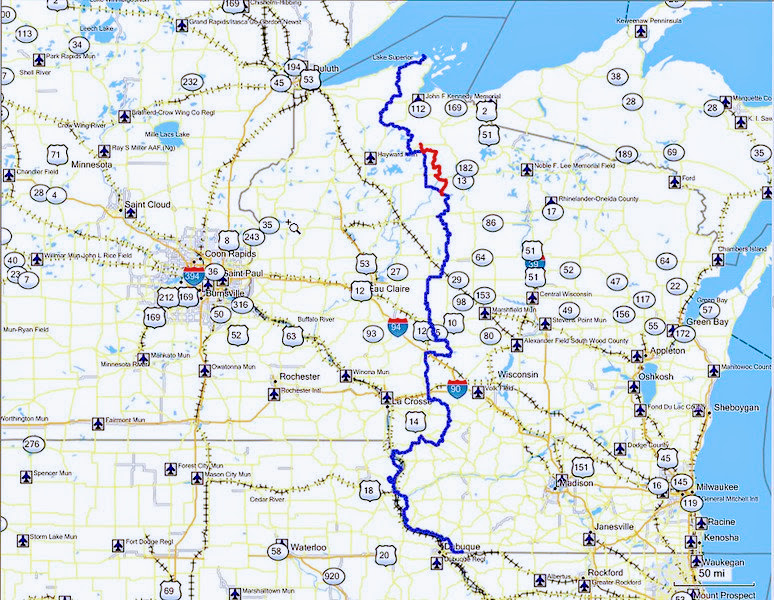 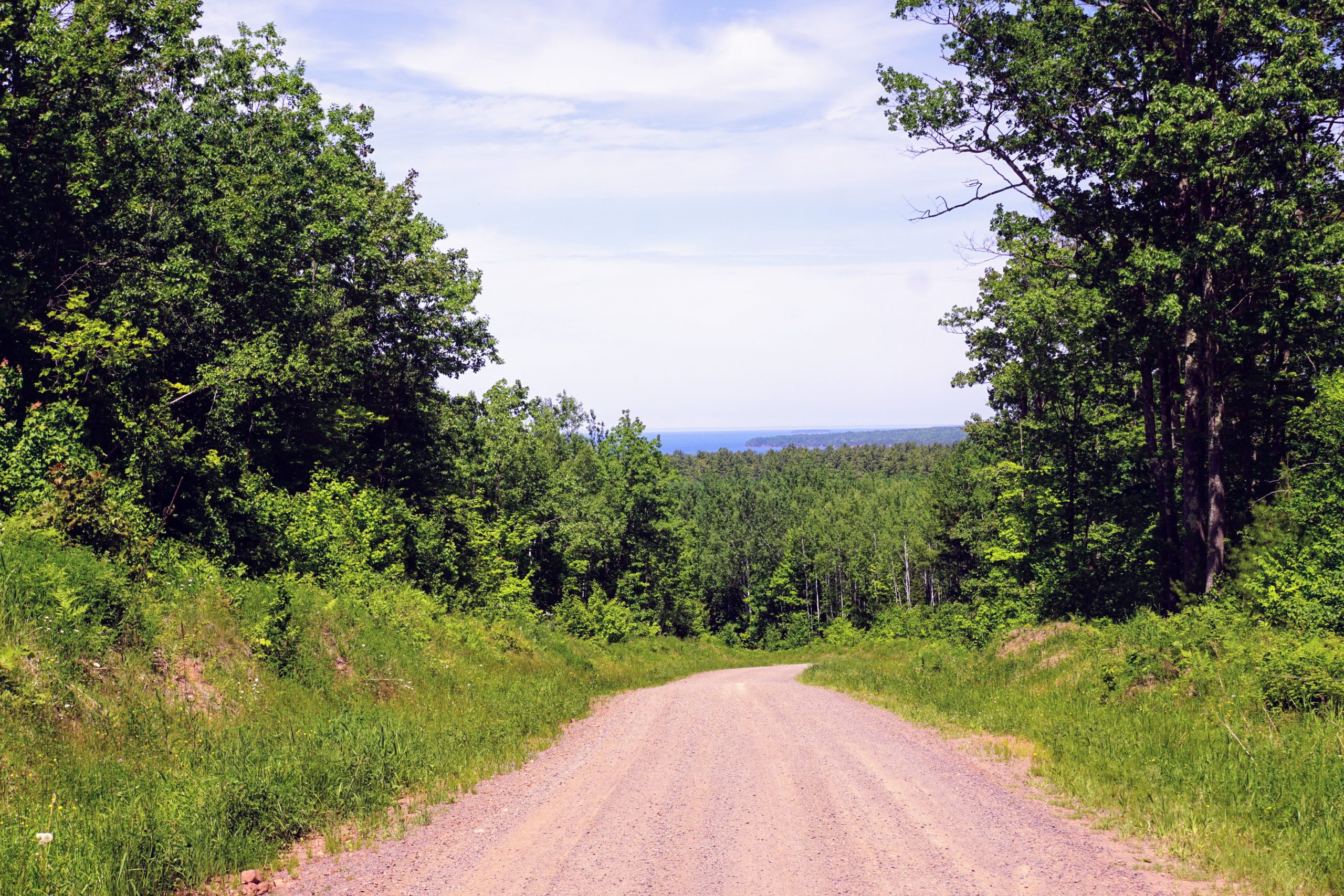 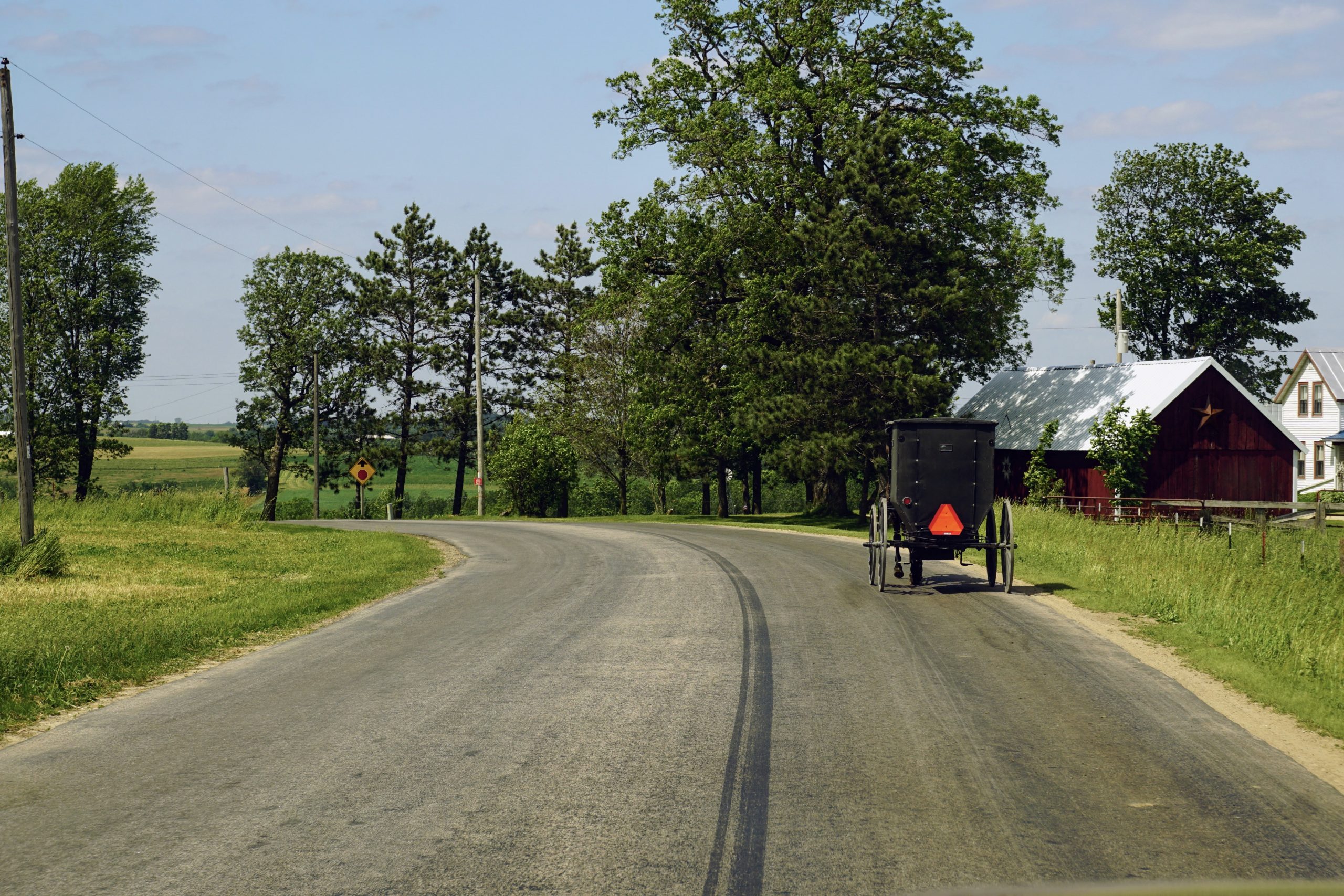 In June of 2021, my dog Raven and I drove the trail over three days from south to north in my Ram 3500 carrying a Bundutec Odyssey camper on what turned out to be one of the hottest weeks of the year. The drive from our home down to the start took almost four hours and we spent the first night camped next to the Mississippi River in a Corps of Engineer campsite at Potosi, Wisconsin. Up early the next morning, we started off on the TWT following quiet farm roads as the route went up and down through the various coulees that define this part of the country. Wisconsin is primarily an agricultural state famously known as America’s Dairyland, but many other crops are grown here including corn, soybeans, and cranberries. Many of the farms, especially in the Driftless are owned by the Amish and its not unusual to see horse drawn buggies on the roads. The Driftless, so called because it lacks glacial debris (boulders and gravel) left in the last ice age is also considered one of the world’s preeminent trout fishing areas so there are an abundance of streams and rivers always present.

The TWT turns inland before heading west back across the Mississippi River into Iowa at Marquette. Travelling north, the route follows the river before going around Effigy Mounds National Monument and into Yellow River State Park. Effigy Mounds is the site of several burial mounds, some in the shape of animals, that are associated with approximately 20 different Native American tribes. The route through Yellow River SP was beautiful and I was able to visit a restored fire tower and some abandoned buildings from the 19th century.  The route continues in and out of the coulees before ending once again at the Mississippi River where it crosses back into Wisconsin on an old truss bridge at Lansing, Iowa.

Once back in Wisconsin, the TWT heads inland passing through the small towns of Soldiers Grove, Sugar Grove, Viola, and Ontario crisscrossing the Kickapoo River and the Elroy Sparta State Trail before passing over Interstate 90 and into Sparta. Given the heat and humidity, I opted to stay in a commercial campground outside Sparta that was virtually empty mid-week and offered a much-needed shower. After a quiet night, we headed into Sparta to refuel, having covered about 250 miles of the route so far. North of Sparta, the landscape changes dramatically from the steep and winding roads of the Driftless to flatter straight roads through various state and National Forests. Many of the roads here are also designated ATV and snowmobile routes that are well maintained so we made good time with the occasional stop for Raven to swim in a creek or lake and some serious ball chasing. 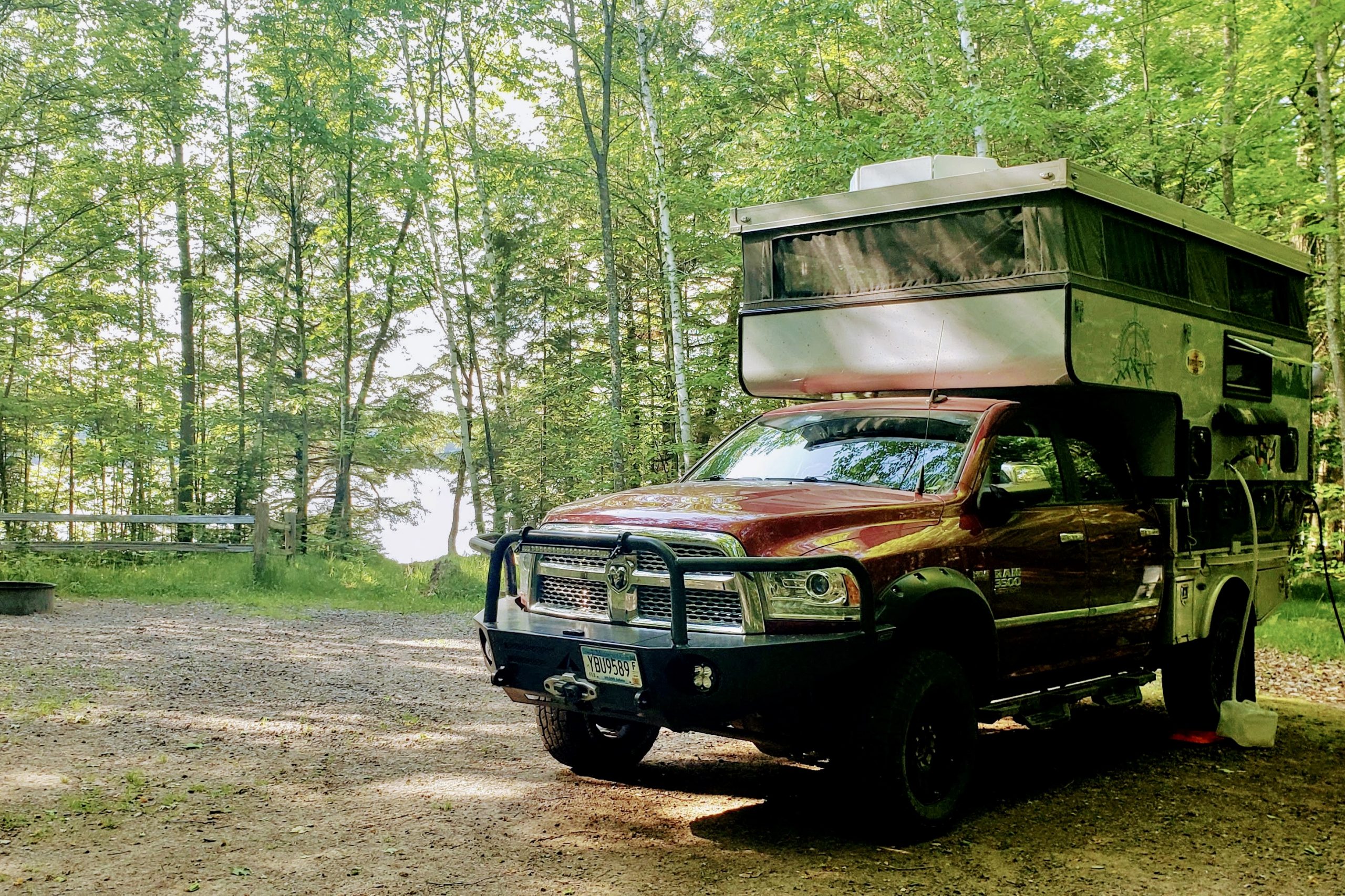 Continuing north, we passed thru several state and national forests including Black River, Chequamegon Nicolet and Flambeau with long stretches shaded by a canopy of old and new growth forest. Small lakes became more and more common as did boat ramps and campgrounds, all of which were empty mid-week.  This area is extremely popular for fishing, hunting, and camping and vacation cabins and resorts occupy the shores of many of the lakes here. The populations of many of the small towns we passed through swell in the summer as vacationers visit to fish and boat on the many lakes and streams nearby. Mid-week, during a record heat wave with high humidity and temperatures in the 90’s, there were only a few hard-core individuals out and about. Passing through the town of Hawkins late afternoon, a thermometer read 95 degrees, so it was time to start looking for a camp spot for the night. So far, we had covered just over 500 miles on our way north to Lake Superior.

There are lots and lots of campgrounds along the road and all were nearly empty. We decided to camp at Connor Lake mainly due to its proximity to water and were able to find a spot that backed up to a small beach. No air was moving at all, and the bugs were starting to feed, so we headed to the lake for some swimming and stick chasing before dinner. It was a very hot, sticky night in the north woods and when we woke at first light, the air was still thick and the bugs still relentless. Up to this point, the TWT traveled over wide, well graded forest roads but that was about to change. As we made a turn, the route ahead looked extremely narrow and overgrown. My gut told me to find a detour, but I motored on through dense brush for several miles that I later learned was an ATV route. The truck and camper suffered some new scratches on both sides, but we soon emerged back onto a wide road. 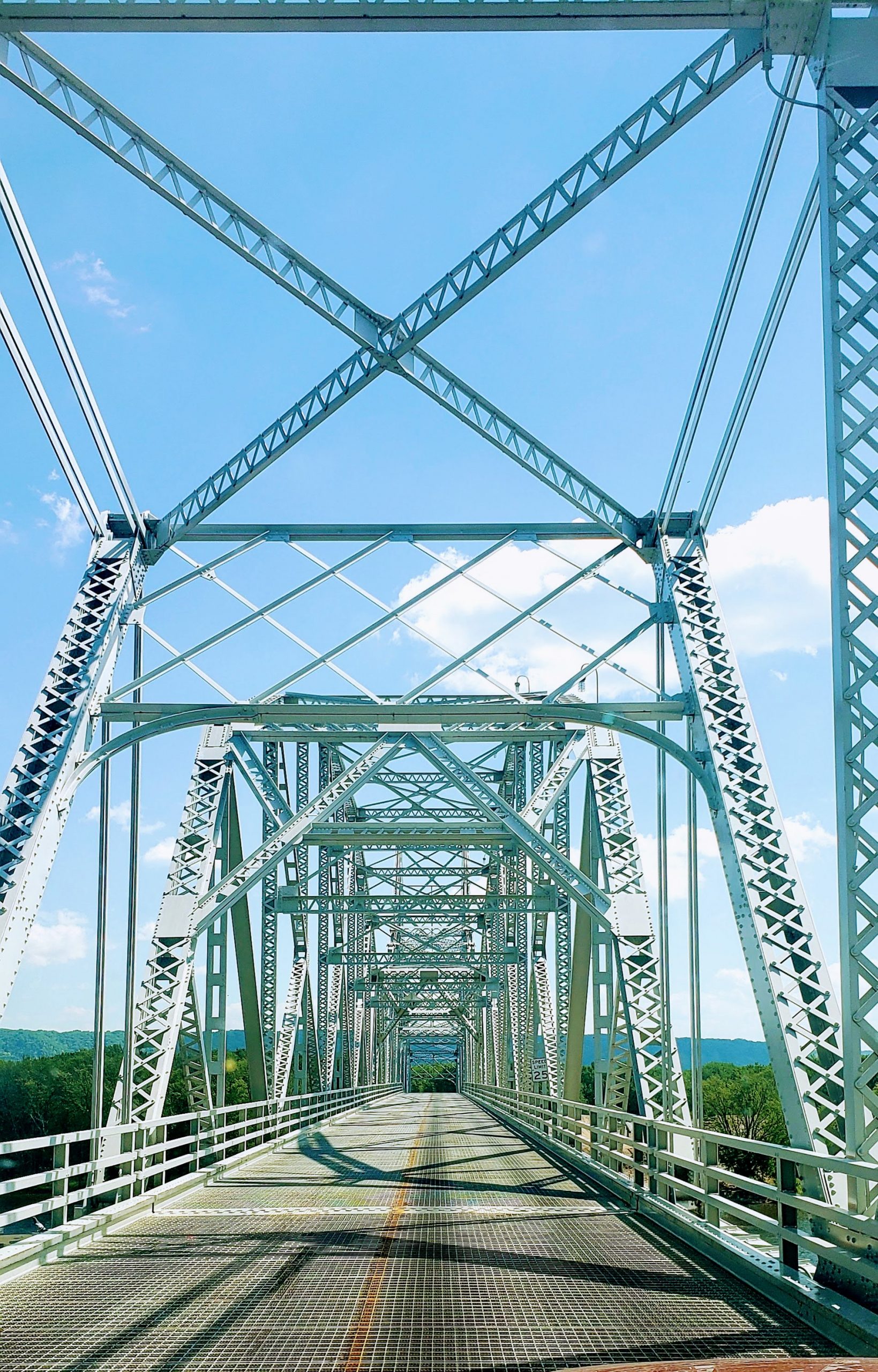 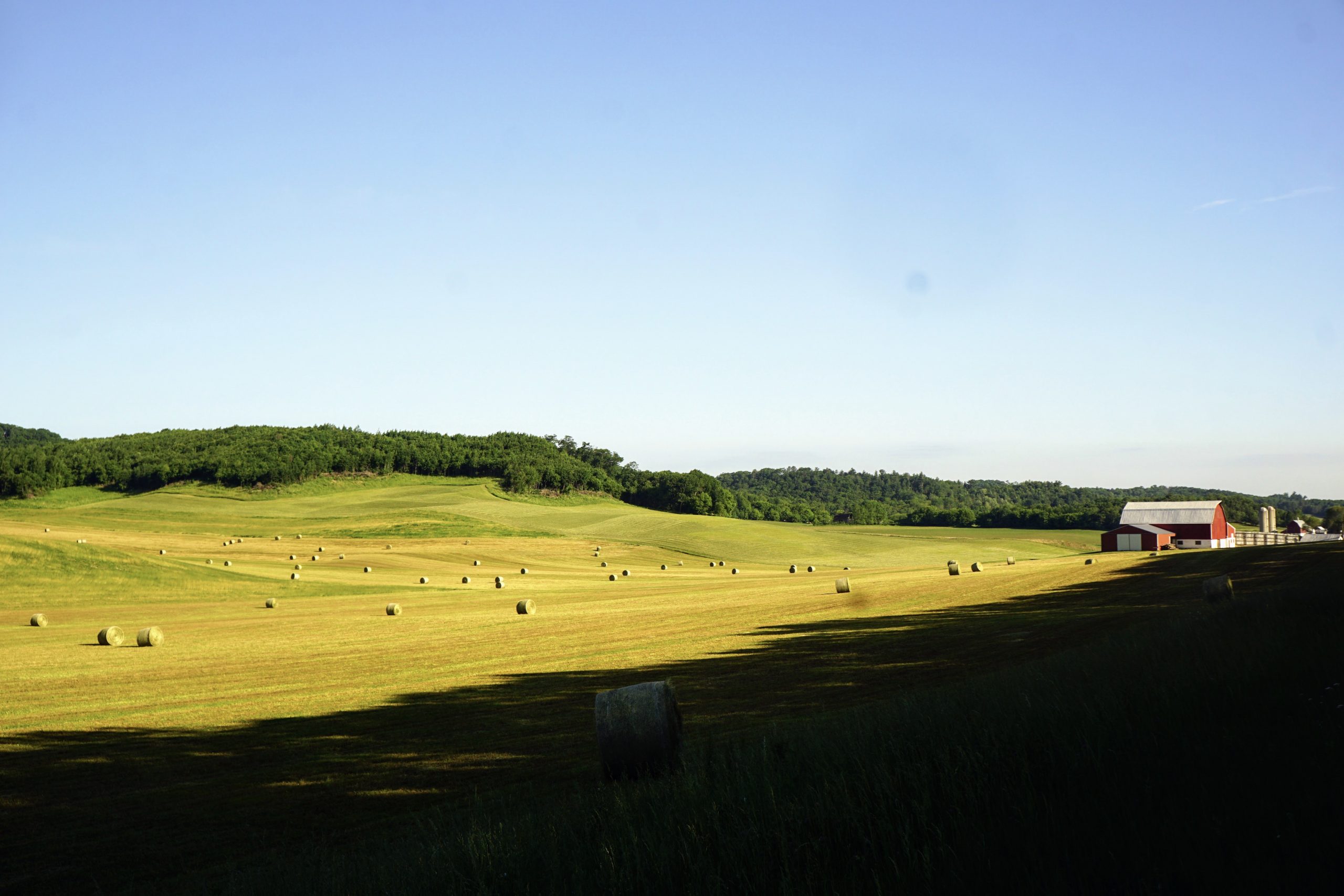 After refueling in Drummond, the route continued north through Chequamegon Nicolet National Forest on its way to Lake Superior. After about 50 miles, the road became heavy, deep sand which required 4WD for the first time. Up until now, I had seen almost no one on the route itself but in the distance were two motorcyclists struggling through deep sand. The temperature was in the 90’s already and they were both wearing full jackets, long pants and helmets. I stopped to see if they needed water or assistance and they both told me they had fallen multiple times struggling to guide their heavy bikes through 3-feet of sand. I attached a tow rope to the truck and gently pulled them out about ¾-of-a-mile until the road became solid again.

Crossing over a hill, I could see Lake Superior for the first time in the distance and during the next mile, the temperature dropped from about 93 to 75 degrees, providing the first cool air of the trip. Lake Superior is the largest freshwater lake in the world by surface area and contains 10 percent of the planets fresh water so it creates its own weather. Once we arrived at State Route 13, we followed that east through Cornucopia before heading north to Point Detour, the northernmost point on mainland Wisconsin and the official end of the TWT.  There is not much to see at the point as it is surrounded by trees, so we headed to Sand Bay where Raven swam in 45-degree lake water until she was shivering.  The campground there was full of school groups out kayaking the Apostle Islands, so we headed back home, another four-hour drive.

Having lived in Minnesota for 30 plus years, I have spent some time in Wisconsin, but never realized how diverse its landscape was. From the rolling hills of the Driftless in the south to the vast forests and lakes of the north, Wisconsin offers an ever-changing landscape and the TWT is a great way to see it all.  It can easily be driven in 3 days and depending on the time of year, camping is abundant and mid-week, reservations shouldn’t be required.  Fall, with the amazing colors along the rivers and through the forests would be an ideal time to experience it and I am already planning to revisit it again.  An adventure route across Minnesota is in the works and that will be on my bucket list once its finished being mapped. Check online to see if your state has a route mapped through it and get out there!

About Kevin MacAfee 6 Articles
Kevin and Linda live in Minnesota and spend part of each year visiting family in Vermont and exploring the National Parks and public lands throughout the American West. Boondocking in remote areas is their passion and the truck camper is the perfect vehicle to make that happen.

Truck Camper Adventure is proud to announce that we’ll be attending the 2016 Overland Expo West in Flagstaff, Arizona. The event runs from May 20-22, 2016. This will be the third time that Truck Camper [read more]

It’s been called the Devil’s Highway and the Way of the Dead, but the El Camino del Diablo has been used for thousands of years by Native Americans, Conquistadors and explorers traveling from Mexico to [read more]

Chevrolet recently announced an off-road trim line version of its mid-size Colorado pickup called the ZR2. Based on its capabilities and features, the ZR2 will be able to do everything well—from traversing heavy two-track trails [read more]