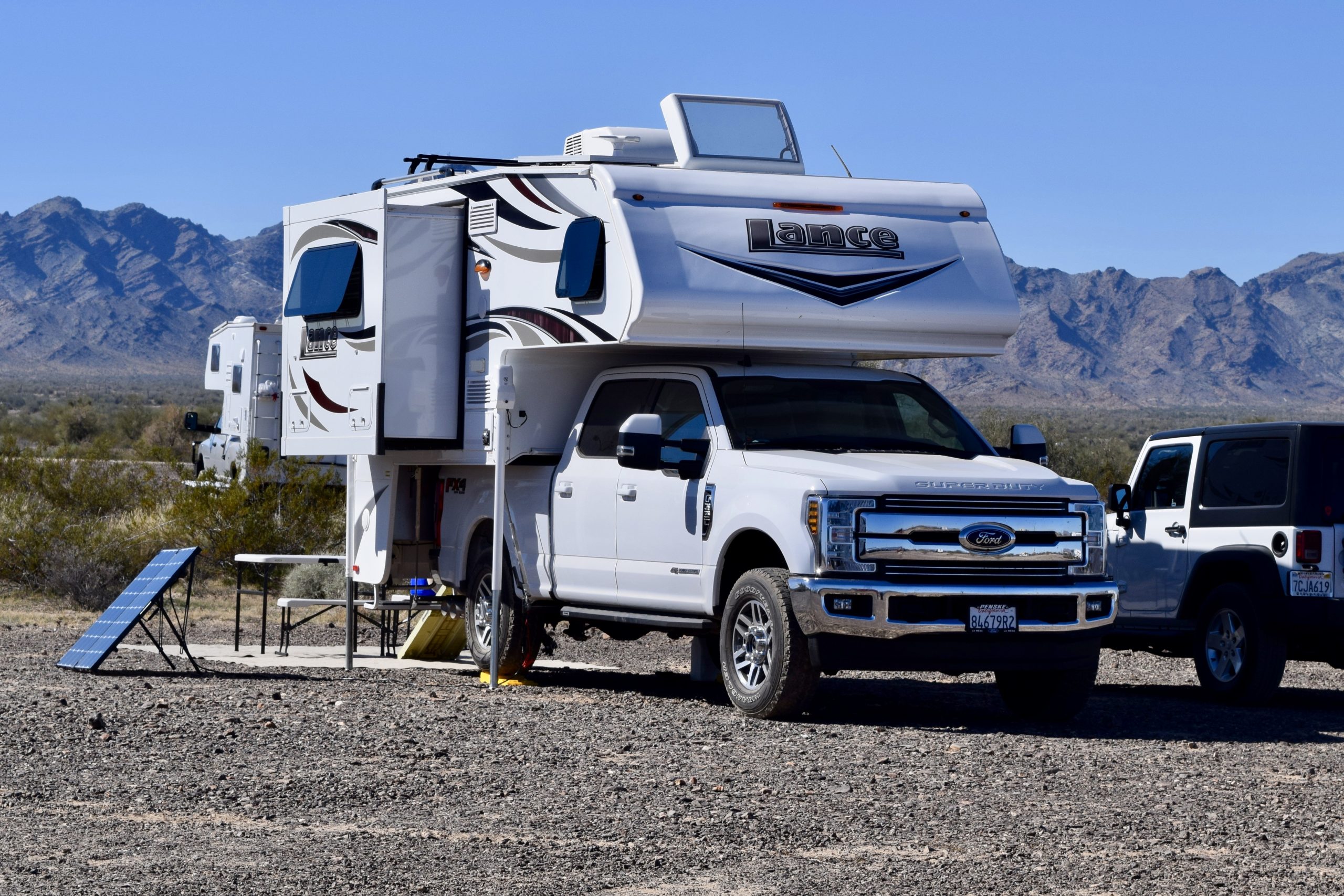 Which type of recreational vehicle (RV) is the best for boondocking? Which RV is the best for getting you to those remote, far-away places? This short article takes a look. Note: for the purposes of this article, boondocking is defined as RV camping in the “boonies” without water, sewer, and electrical hookups, and does not include overnighting in urban locations like Walmart, Cracker Barrel, and Flying J truck stops. 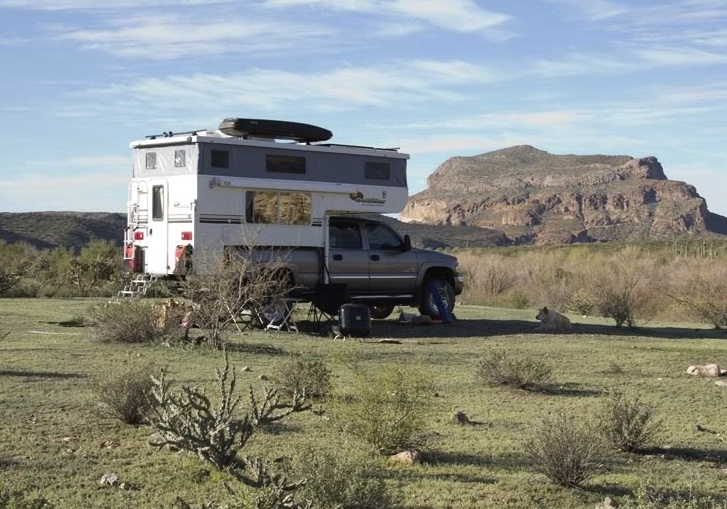 An off-road, rock crawling, boondocking machine, it’s also one of the cheapest and most versatile RVs on the market. The canvas portion of the pop-up means it won’t be as stout a four-season camper as hard-sided models, but what it loses in insulation, it gains in reduced weight, in a lower profile, and in a lower center of gravity. These attributes enable it to climb steep inclines and avoid low tree branches, important considerations for those who like to camp far off the beaten path. It can also be detached, so you can use your truck for four-wheeling, collecting firewood, and hauling things like kayaks to the lake, etc.

Con’s: Not much living space, small holding tanks and battery compartment, poor insulation due to canvas use on pop-up walls.

A wonderfully agile, all-season boondocking rig. Its moderately sized profile means that you won’t be able to rock crawl nor tackle narrow, heavily forested back roads, yet it’s still small and nimble enough to reach all but the most remote locations. While it lacks the luxurious accommodations of a large motor home or fifth wheel, it still offers moderately sized holding tanks and all of the accoutrements you need to camp comfortably while off-the-grid. Still, some models come with as many as three slide-outs, that increase living space, but also increase weight. And like it’s pop-up cousin, it can be detached so you can use your truck for off-roading, collecting firewood, and hauling your boats to the lake. 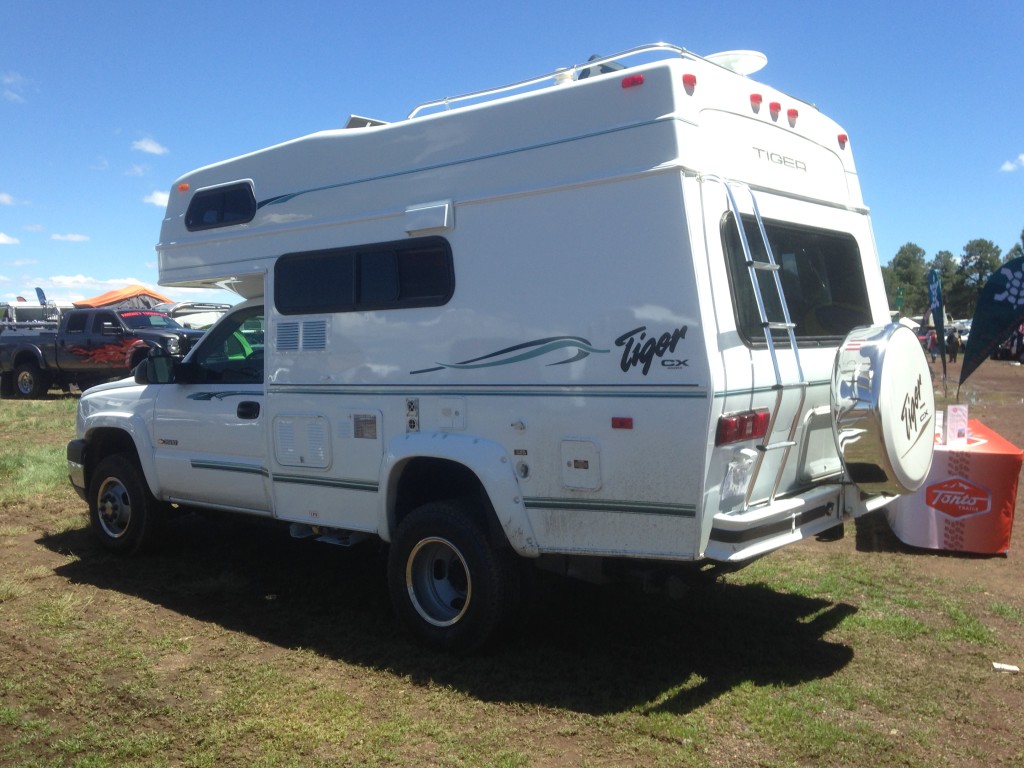 A terrific, all-terrain boondocking RV. The 4×4 capability, low profile, and low center of gravity means that these nimble little beasts can go practically anywhere off the beaten path. You won’t find lots of headroom, large holding tanks, or huge storage spaces in these, but you will find everything else you need to live comfortably while you camp in the wilderness. Unlike truck campers, you don’t have to leave your RV to move from the driving area to the living area unless you want to, an important consideration for safety and when camping in bad weather. 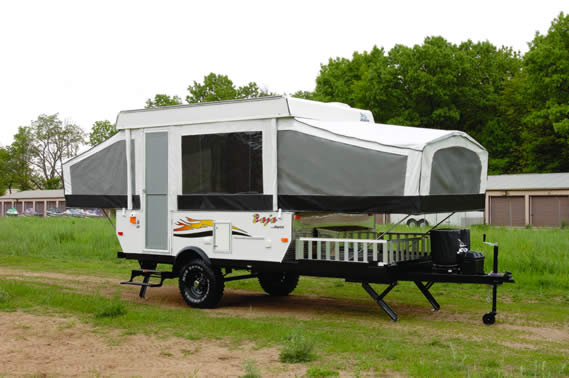 This low-cost, low-profile RV won’t win any beauty contests, but it can be towed practically anywhere by any vehicle. You won’t find luxurious accommodations in these either, but you will find two large sleeping areas, a small kitchen, and a large sitting area, enough to keep most families happy and comfortable. Most provide only a small fresh water tank, so if you want to boondock for a long period of time you’ll need to bring extra water with you. Some of the larger, fancier models are equipped with a platform that can haul a quad or a couple motorcycles, and some are even equipped with a toilet and small shower.

Con’s: Not much living space, tiny holding tanks, no bathroom, poor insulation due to canvas use on pop-up walls. 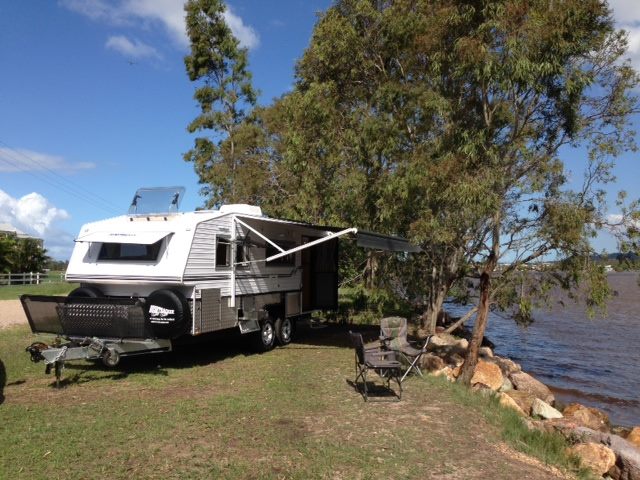 Available in numerous sizes and floor plans, and very affordable, this venerable RV is a great choice for couples and families. While it does have some off-road limitations, the axles can be flipped to increase ground clearance which will allow it to be taken on very rough roads. Some models have fairly large holding tanks, storage areas, and can support up to two batteries on the A-frame. Unlike motor homes, it can be detached to set-up camp so your tow vehicle can be used for other activities. And unlike a fifth wheel, it can be towed by practically anything with a large enough tow rating. 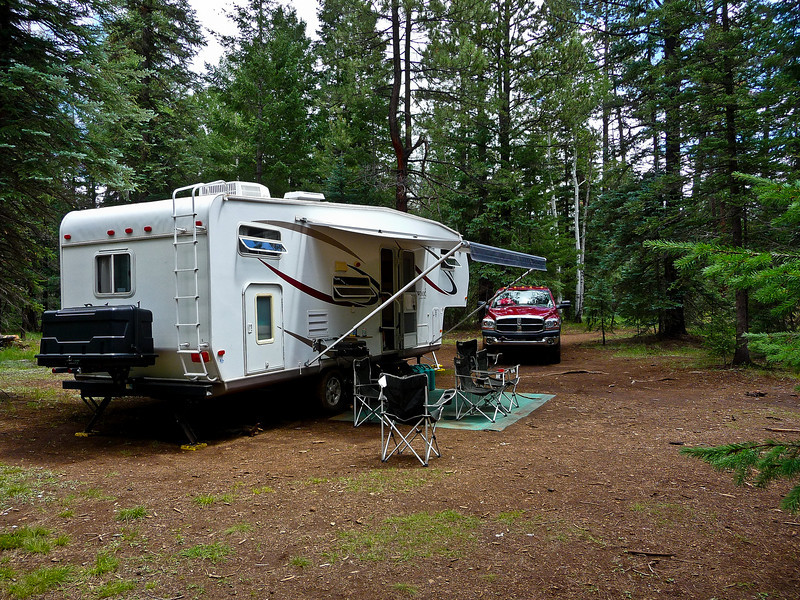 A great choice if you like your elbow room and have children. While it tows much better than a travel trailer, and is as roomy and comfortable as many Class A motorhomes, it’s high profile and large size will also restrict you to easy-to-reach, level boondocking areas like those found at Quartzsite. However, all the features that you would want for boondocking, such as large holding tanks, a large battery compartment, and plentiful storage can be found in this RV. The huge amount of roof space can also accommodate several solar panels. Due to its size and ease of towing, it’s a very popular choice with full-timers and boondocking enthusiasts. 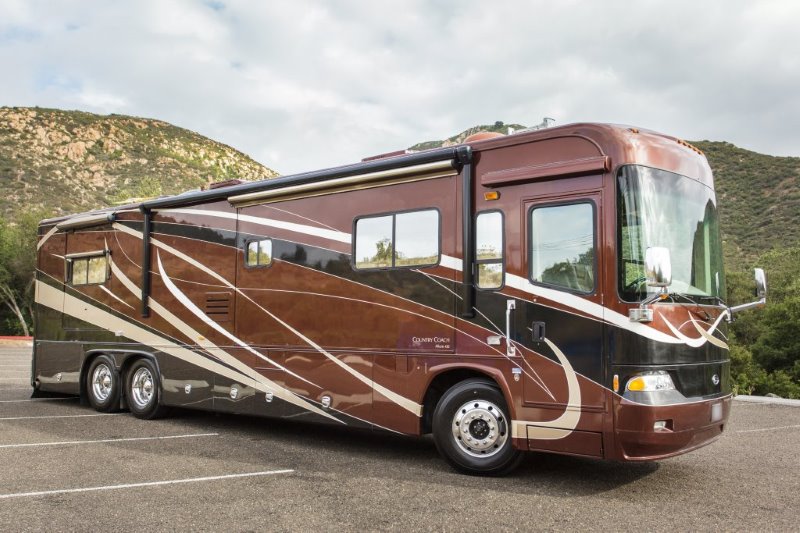 This ungainly monster is pretty limited on where it can go, but once you get there, you’ll be very comfortable doing it. Up to 40 feet long, this mansion-on-wheels offers copious amounts of storage, plentiful elbow room, large holding tanks, and can comfortably sleep up to eight. The massive roof and large battery compartment can also accommodate a first-rate solar power system with multiple banks of batteries, great for extended boondocking. It’s also the most expensive class of RV on the market. In spite of this, though, it’s still a very popular choice with full-time RVers and for those who love to boondock.

Pro’s: Sleeps up to eight, large holding tanks and battery compartment, comfort and livability, all-season, plentiful storage, can tow a vehicle, inside access between living and driving areas. 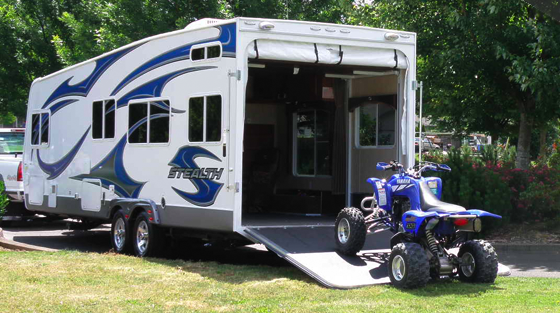 The new-kid on the RV block. Most commonly found in either a travel trailer or fifth wheel configuration, it provides not only plentiful living and sleeping areas for you and the kids, but also a garage to haul your favorite toys. Unlike the standard travel trailer and fifth wheel, it’s built for boondocking from the factory. It comes with massive fresh water and waste water holding tanks, a large battery compartment, a generator, and even a gas station to fuel your toys. The large, slightly-angled roof can also accommodate numerous solar panels, a big plus for off-the-grid camping. Unfortunately, this lumbering beast is also very heavy and not very maneuverable, which greatly limits you to flat, easy access areas like those found in the desert. 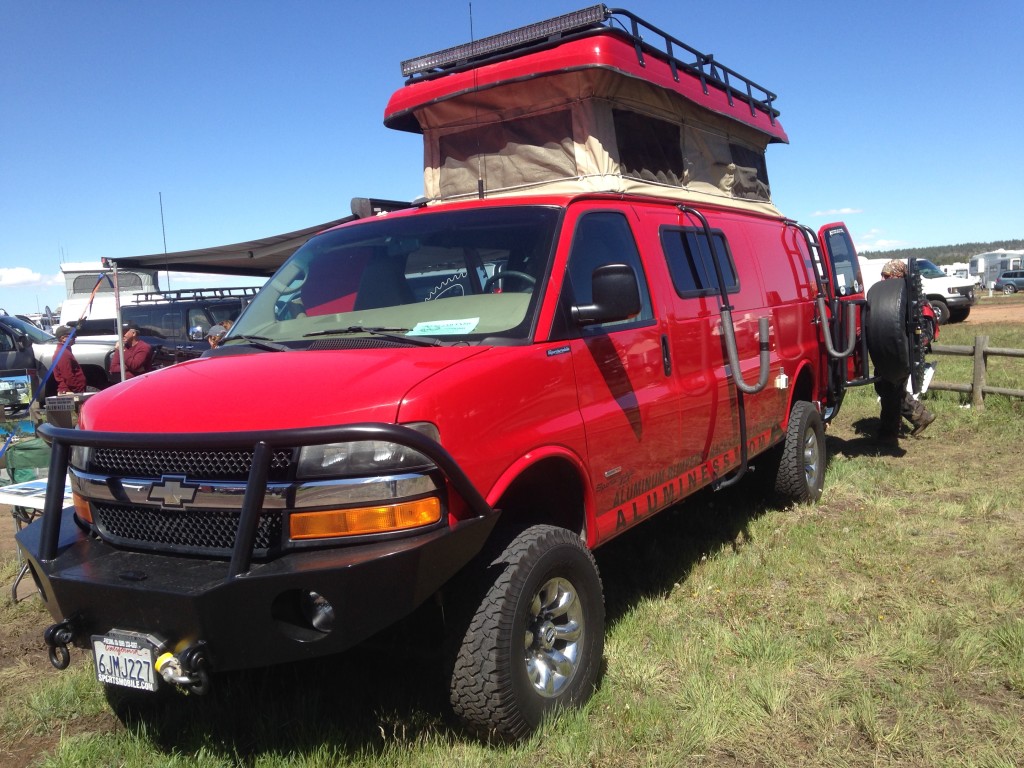 Another off-road, boondocking machine. It’s true this go-anywhere beast doesn’t offer large holding tanks or much elbow room, and can sleep only two persons comfortably, but it’s probably the best off-road RV on the market today. Steep inclines, large boulders, and low tree branches usually aren’t a problem for this 4×4, low-profile unit. In spite of its size limitations and the fact it doesn’t provide a full bathroom (most offer just a toilet), it still offers most of the features that you need to camp comfortably while off-the-grid. A perfect rig for a couple who really enjoy hiking and rock climbing and who really enjoy the great outdoors.

Poll Results: So, which RV is the really the best RV for boondocking? I took a poll on this website in early 2012 to find out. Here are the results based upon 175 responses:

As you can see, the hard-side, 4×4 truck camper won in a resounding fashion at 34 percent with the pop-up 4×4 truck camper coming in a distant second at 14 percent. A big thanks to everyone who participated in the poll.

A special thanks to Ryan Melvin, Glenn Orsted, and Dave Rogers for permission to use their photographs for this article.

About Mello Mike 615 Articles
Mello Mike is an Arizona native, author, and the founder of Truck Camper Adventure. He's been RV'ing since 2002, is a certified RVIA Level 1 RV Technician, and has restored several Airstream travel trailers. A communications expert, he retired from the U.S. Navy in 2004 as a CWO3 after 24 years, worked in project management, and now runs Truck Camper Adventure full-time. He also does some RV consulting, repairs, and inspections on the side. He currently rolls in a 2013 Ram 3500 with a 2021 Bundutec Roadrunner truck camper mounted on top.
Website Instagram YouTube

If you’re interested in boondocking or overlanding, it’s recommended that your truck camper have a minimum of two 6 volt or two 12 volt deep cycle batteries. When shopping for batteries for your RV make [read more]