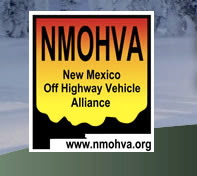 As most of you know, I don’t advertise or promote many causes on this website. However, a few causes are worthy of discussion and promotion and one of these is the fight against the US Forest Service’s so-called Travel Management Rule (TMR). I’ve discussed this law numerous times in the past and as I’ve pointed out the impact of it varies state by state and national forest by national forest, but one national forest severely impacted by this law is the Sante Fe National Forest in New Mexico. As a result of over application and abuse of this law, about 95% of the previously open roads and trails in this forest have been closed to public use and boondocking. This is a real travesty.

Yesterday, I received the below email from Joanne Spivack of the New Mexico OHV Alliance (NMOHVA). Many of you already know about the far reaching affects of the TMR, but if you don’t I encourage you to educate yourself, become active, and donate to this organization who is taking up the fight against the federal government and extremist special interest groups. Winning this fight will set a precedent and give citizens in other states the resolve and wherewithal to take up the fight to reclaim public lands lost for public use. Thanks.

The New Mexico Off Highway Vehicle Alliance is the ONLY
organization fighting the closures in the Santa Fe National Forest. We
are people’s ONLY hope to get back our camping, roads and trails. Alot
of campers are not OHV users. They don’t know yet what they have lost.
They don’t know the only one standing up for them is NMOHVA.
The June decision leaves only 381 miles of road open to camping, in five
ranger districts totalling over 1.2 million acres of land. Forest Road
376, (Lake Canyon) from Gilman Tunnels is Fenton Lake is now entirely
closed to camping, on both sides of the road.
Before, people could vehicle camp off 6,000+ miles of roads. Now only 5%
of that is legal. Everyone will be competing for the few legal places.
If people want to win back their camping, we need them to donate to our
Access Defense Fund. They can read about the lawsuit (FAQ’s) and donate
(and join) online at our website, www.nmohva.org
Filing a lawsuit is no guarantee of success. But I can guarantee to
you what happens if we don’t do it: we lose 95% of the camping.
We’re doing this FOR everyone, for you. But we can’t do it without you.
This lawsuit will cost about $100,000. We have enough money to start
this lawsuit, but not to complete it….we’re working to raise the
money we know we will need in 4-5 months. We are absolutely dependent on
public support.
We’re asking people to think about the thousands they’ve spent on trucks
and trailers (and gas)…..and be generous when they make that
donation.

Exploring Utah’s Valley of the Gods