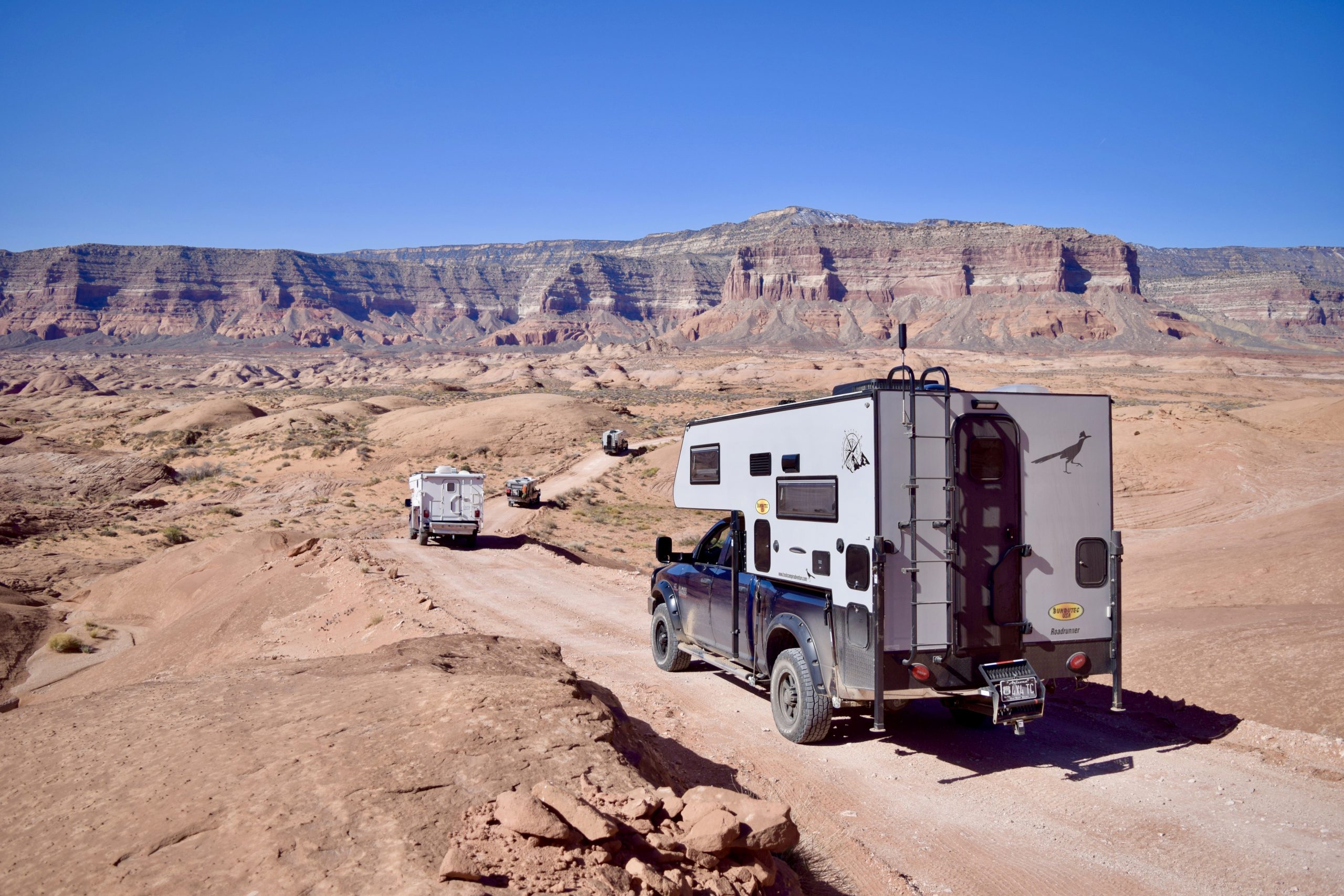 In the autumn of 1879, some 250 members of the Church of Jesus Christ of Latter-Day Saints—men, women, and children—and 40 covered wagons undertook one of the most challenging and dramatic pioneering expeditions in American history. Their mission? To establish a settlement along the San Juan River in southeastern Utah. Their plan? To blaze a trail through 200 miles of rugged, unmapped country. An expedition that they expected to last six weeks became an epic, six-month long journey demanding scarcely imaginable endurance, determination, faith, and grit.

Though challenging from start to finish, the most difficult and perilous section of the Hole-in-the-Rock route comprised barely a mile of the 200-mile-long journey. Scouts had discovered a deep cleft in the cliffs that separated the expedition from what was then the Colorado River and is now Lake Powell. The pioneers proposed that they could widen this notch into a steep wagon trail. On December 14, 1879, that’s just what the expedition set about doing. Six weeks later, the wagons began the steep, 1,800-foot decent to the Colorado River through what is now known as the “Hole-in-the-Rock.”

On Monday, March 29, 2021, seven people and four truck campers embarked on an epic three-day expedition to the famous Hole-in-the-Rock: Kevin MacAfee in his Bundutec Odyssey/Ram 3500, Tom and Marianne Banks in their Northstar 850TC/Chevy 1500, Alex and Julie Blasingame in their Bundutec BunduVry/Ford F-250, and yours truly along with my wife Karen in our Bundutec Roadrunner/Ram 3500.

Due to the remoteness of this drive, we stopped at the Escalante Interagency Visitor Center on Monday to get a report on the latest road conditions. A large snow storm hit the area three days earlier, so the condition of the road was a concern and we almost cancelled the trip entirely. Fortunately, the road dried out after three days of sunny weather and was in excellent condition by the time we left Monday afternoon. The one thing you never want to do is drive on wet southern Utah dirt and clay. This is because it turns into a slick, gooey mud after a rainfall. Many tourists have gotten stuck trying to do exactly that, even in high-clearance 4WD vehicles.

We also stopped at the Hole-in-the-Rock Heritage Visitor Center on the east side of town to learn more about the original 1879-1880 trek. The self-guided tour at the heritage center includes informational kiosks and plaques, a life-size replica of a covered wagon, a gift shop (which, unfortunately, was closed), and bathrooms. After this we drove the three miles to the entrance to the Hole-in-the-Rock Road where we aired down our tires—45 psi rear and 40 psi front. Our caravan finally hit the road at 1400.

Our first stop on Hole-in-the-Rock Road? Devil’s Garden. If you like hoodoos, you’ll love Devil’s Garden. This geologic delight is located about 12 miles from the entrance. This is a must-do stop for anybody exploring the Hole-in-the-Rock Road. The Devil’s Garden contains some of the Escalante area’s most iconic rock formations, including Metate Arch and numerous hoodoos like the Four Wise Men. There is no trail system here, just a collection of crisscrossing trails that can be explore at leisure. At the garden you’ll find a large parking lot, a pit toilet, and several picnic tables where you can enjoy a quick lunch.

Due to the late start, we setup camp about 20 miles from the entrance. Boondocking locations is one thing that’s usually in plentiful supply, but not this time. The influx of tourists due to Spring break and COVID cabin fever made it difficult to find a suitable spot for four truck camper rigs. We were finally able to secure a spot beyond Left Hand Collet Road, which links up with the Smoky Mountain Road to the west, another road in the Grand Staircase that we explored in 2015. Our camping spot was located on the west side of the road among some Junipers though the surface where we camped was sandy and prone to getting kicked up by the high winds that were prevalent during the day.

On day two, we got an early start for what would be the longest part of the journey—the 35 miles to the Hole-in-the-Rock. Due to a tight schedule, we had to stay on track though we did stop several times during the day to stretch our legs and take some photos. If you have the time, we highly recommend exploring the Peek-A-Boo and Spooky Canyons. These multi-colored slot canyons can be found by taking Dry Fork Slots Road turnoff. Without a doubt, these are the most popular hikes in the Escalante area. We met several families and couples in Escalante who had spent time exploring them. The two slot canyons can be explored individually, but they can both be done is what is a very popular loop that takes about three to four hours.

Our next big stop? Dance Hall Rock. Located about 42 miles down Hole-in-the-Rock road, Dance Hall Rock is a large, sandstone amphitheater-shaped rock. Here we explored the natural amphitheater and took in lunch. In December 1879, the pioneers spent several weeks here waiting for the rest of the expedition to arrive and for leaders to determine if the proposed route to the Colorado River was even feasible. To pass the time and keep up morale, they held several dances in the the natural amphitheater they called Dance Hall Rock. The acoustics are fantastic. The location is now a National Historic Site and would make an excellent location for a Bluegrass Festival. I’m not sure if one will ever be scheduled, but if one was we certainly would attend it.

After a one-hour lunch break, we proceeded to tackle the last 13 miles to the road. This is, by far, the most scenic part of the drive and most difficult. Up to this point the most prominent landmark of the drive is the massive Kaiparowits Plateau several miles to the west, but from here the road rises and dips through numerous scenic canyons and large washes, including the ill-named Carcass Wash where 13 members (seven boys and six adults) of a Boy Scout Troop died in 1963 in a horrific accident. A survivor said the driver of the truck attempted to shift gears to go up the steep grade, but the attempt failed and the big truck toppled over backward 25 feet into the ravine where it landed on some of the victims. A memorial was erected on the scene on June 10, 1993, the 30-year anniversary of the crash.

Six miles later our caravan entered the Glen Canyon National Recreation Area. From this point on the pace slowed down to a near crawl as the road passed over numerous outcrops of rough, slick rock. In several places you can still see ruts from the original wagons that traveled this route in 1879-1880. Unfortunately, road graders have erased many of the original ruts in the slick rock though you can still see several in numerous places where long gouges in the rock can be found.

At 1430, we finally reached our destination: the famous Hole-in-the-Rock. Words can’t express how amazing the “hole” really is. It seems impossible to pass wagons down this steep and narrow cleft some 1,800 feet below, but that exactly what those intrepid pioneers did some 140 years ago. Today, you can still see numerous inscriptions on both sides of the rock from members of the the original trek.

A placard at the heritage center said it best when reflecting what the Mormon pioneers accomplished, “most who see the Hole-in-the-Rock firsthand are astonished that the pioneers traveled that route even once. Yet settlers continued to use the rugged road for at least a year, driving both up and down through the hair-raising hole. In 1881, Charles Hall found a more accessible route across the Colorado River 20 miles upstream, a site now known as Hall’s Crossing.”

After exploring the Hole-in-the-Rock, we settled down for a quiet evening among the moon and stars, reflecting on the days activities. Several took in hikes in the area, while others, like myself, sat down to document the day’s activities and download photos. All of us were shocked to discover that we had two bars LTE Verizon at the campsite.

A few notes about this location. The parking area where you can camp isn’t very large. There is perhaps room for only six or seven rigs tops unless you want to camp on uneven slick rock. Still, we highly recommend visiting this location. Pictures really don’t do the “hole” and the surrounding environs justice. It’s simply breathtaking. The high that day was 55 degrees. Perfect.

The next morning we set a course for the 55-mile-long return trip to Escalante, basking in the glow of what we accomplished and what we just witnessed. The Hole-in-the-Rock Road is both scenic and historic. It’s also inspiring when you reflect what those pioneers accomplished before the age of the automobile.

Any type of truck camper rig, including duallys, can drive on the Hole-in-the-Rock Road. The road is wide and well-graded at the beginning, but sections of the road are very “washboardy” up to the Dry Fork Slots turnoff. The last 20 miles of the Hole-in-the-Rock Road is slow going as the road passes through several large washes and over numerous, rough outcrops of slick rock. Because of this, tourists and vehicles are few and far between, especially the last 7.5 miles within the the Glen Canyon National Recreation Area. Our speeds varied between 5 and 22 mph. Airing down is highly recommended.

The Hole-in-the-Rock Road is a worthy trip for any truck camper adventurer. It’s truly epic. As for the drive itself, we highly recommend doing it, though we recommend taking longer than three days to do it. Honestly, if you really want to experience what Hole-in-the-Rock Road has to offer, you’ll need a good week to see all of the sights and take in the hikes. When is the best time to explore the road? We recommend doing it in either spring or fall, maybe winter. With temperatures often exceeding 100 degrees, summer is way too hot, but will be less crowded if you’re willing to put up with the heat. Just bring lots of water. With regard to the difficulty, what would we rate the Hole-in-the-Rock Road? On a scale of 1 to 10 with 1 being the easiest and 10 the hardest, we have to give a 2. Easy, but slowing going with deep ruts at the end.

Designated an “All-American Road” and placed on the National Scenic Byway register by the Department of Transportation in 1973, Utah’s Route-12 is a drive that should be on everyone’s bucket list. Offering some of the [read more]

Unforgettable! Spectacular! Amazing! These are just a few of the superlatives that come to mind when describing the Burr Trail Scenic Backway in southern Utah. A former cattle trail, the Burr Trail provides the overlander [read more]

The Lake Powell reservoir on the Arizona and Utah border is a major tourist attraction receiving close to 2 million visitors a year. Popular recreational activities include fishing, boating, and camping. Officially, the lake it [read more]