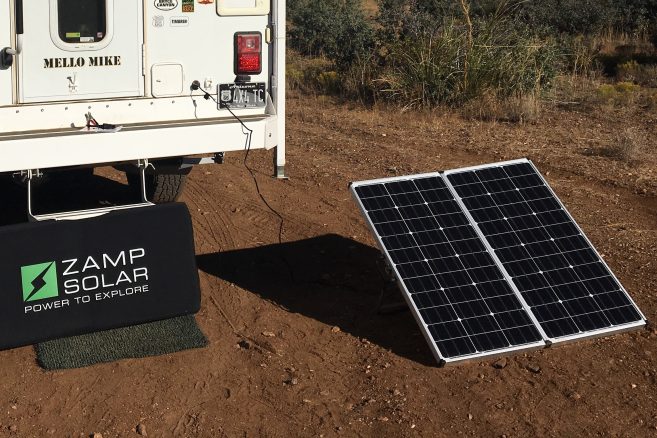 Truck Camper Adventure recently announced an exciting partnership with Zamp Solar, an American company based out of Bend, Oregon. With this partnership, we are planning several upgrades to the Truck Camper Adventure rig’s 240 watt roof-top solar power system. These include a new Zamp 80 watt roof-top solar panel, ditching our Go Power 600 watt modified sine wave inverter in favor of a Zamp 1,000 watt pure sine wave inverter, and swapping out our old Renogy 100 watt portable solar power system for a much improved Zamp 160 watt portable solar system. We are already using the portable solar panel setup. It’s getting a lot of use. The roof-top solar panel and inverter upgrades will be made soon. Look for updates on these additional upgrades in the coming weeks.

You may be wondering why we use a 160 watt portable solar array when we already have a 240 watt roof-top system. The answer is simple—sometimes we need the extra power. Our DC compressor refrigerator requires a lot of power and when we have to use our furnace in cold weather our solar power system sometimes can’t keep up, especially when the clouds roll-in. A powerful portable solar power system like Zamp’s 160 watt system gives our camper’s roof-top system a big boost. We don’t always have to use it, but when we do, it does a terrific job keeping our batteries topped-off.

As you know, portable solar panels have significant benefits over roof-top solar panels. Unlike roof-top arrays, portable arrays can be both tilted and aimed directly at the sun to maximize output. Being able to do this is huge, especially during the winter months when the angle of the sun is at its lowest point in the sky. Not only that, but portable panels can easily be moved to avoid shading from nearby trees. The only real negative with a portable solar array, of course, is theft—like a generator, you have to keep an eye on it. This isn’t a big problem for us because we usually boondock in isolated places. Most of the time we camp alone.

Unfortunately, when it comes to portable solar power systems, there’s a lot of cheap, imported junk out there. That’s why I was excited to try out Zamp Solar’s American-made 160 watt portable system. This feature-packed, high-quality solar power system packs a powerful punch. It features two 80 watt panels capable of generating 9.4 amps of charging current and the ZS-15AW PWM portable charge controller. The ZS-15AW is special. It provides a battery charging algorithm that includes not only the standard bulk, absorption, and float charging stages, but also an equalization stage for sulfated batteries and a soft charge stage for deeply discharged batteries. Another thing that makes the ZS-15AW special is that it’s WATERPROOF. Most of the charge controllers found in other portable solar power systems aren’t. More about that later. In addition, the ZS-15AW offers an easy to read digital LCD screen that displays valuable information like battery voltage, charging current, total amp hours accumulated during the current day, charging capacity, battery types, and unit fault codes. This 15 amp charge controller is capable of supporting four types of deep cycle batteries—wet cell, gel cell, AGM, and calcium.

Like the excellent Zamp ZS-30A charge controller mounted inside our truck camper, the ZS-15AW has LED light indicators that show the charging status and condition of your batteries. The three charging status lights grouped on the left let you know if battery charging is taking place or if the unit is providing a maintenance float charge. The red power light indicates that the unit is “on” or active while the absence of a red power light, of course, means that it’s dark and that the unit is inactive or “off.” During a bulk, absorption, or an equalization charge, the blue charging LED will be lit, while a soft charge is signified with a flashing blue light. Moreover, the absence of a blue charging light and the presence of a green charging status light to the right means that the battery is 100 percent charged and is being maintained with a float charge (this, of course, is a good thing and what you hope to achieve with your system each day). The three battery condition LEDs grouped together on the right—which indicate roughly a 25 percent, 50 percent, and 75 percent charge—provide an easy to understand graphic display on the overall voltage state of your batteries. In short, there isn’t a better made, more capable portable PWM charge controller in today’s market. 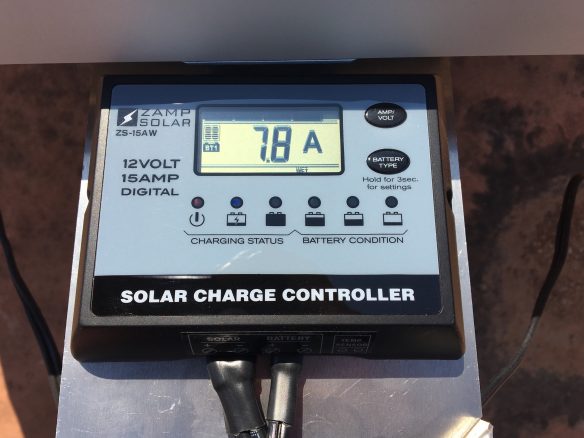 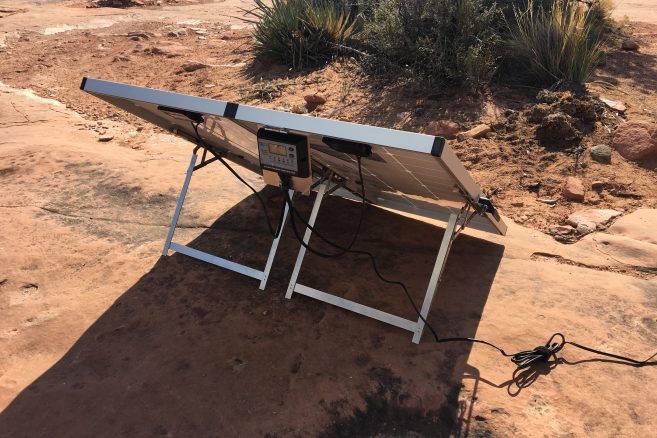 The high quality of Zamp’s ZS-15AW charge controller is matched by the company’s equally impressive solar panels. Zamp utilizes top-of-the-line monocrystalline solar cells that provide a high-efficiency output (a minimum of 19 percent) throughout the day. These top-of-the-line panels feature AR (Anti-Reflective) coated glass for maximum light absorption and protection. You can really feel and see the quality when you handle and look at these panels closely. Better yet, Zamp’s solar panels come with a 25-year output warranty.

According to Zamp’s website, the company recently upgraded the anodized aluminum frames used in all of their solar panels. The pre-drilled mounting holes were ditched in favor of a new Omni-Mount Frame. This newly designed frame is sturdier and more versatile than the traditional frame and we believe it. The frame is stronger and better than the one found in our old Renogy portable system. The only negative with this portable system are Zamp’s fixed mounting legs—they can’t be extended. Not a big deal for most, but could be if someone is looking for a portable system with an adjustable angle. We sometimes use a small rock or log to prop the legs up to get the desired angle to the sun.

What I really like about Zamp’s 160-watt portable solar power system is that it’s compact and easy to deploy. Despite its slightly larger size, it weighs only 34 pounds and measures roughly 40 inches by 40 inches. Folded up, it measures only 20 inches by 40 inches and stores easily in the padded carrying case. We store ours on the back seat of our truck. The portable system can connect to your batteries two ways—by using either the included alligator clips or by using Zamp’s industry standard two-prong SAE plug (the latter is what we use, employing a recently installed Zamp sidewall charge port). Switching between the plug to the alligator clips is quick and easy. We recently camped with some friends who needed to recharge the batteries in their camper. Connecting the system to their rig’s batteries using the included alligator clips only took a few seconds.

Overall, we’re pretty impressed with the high output, all-weather capability of this 160 watt portable solar power system. Operating in parallel with our existing 240 watt roof-top system, it provides our rig with 400 watts of clean, renewable energy. Indeed, this system is so powerful, it typically takes only two to three hours in full sunlight to fully recharge our depleted batteries. Not only that, but it consistently outperforms our 240 roof-top solar system during cooler months because of it’s ability to be both aimed and tilted at the sun. That tells you a lot about the system right there.

But what really sets this system apart from the other portable systems, is the ZS-15AW waterproof charge controller. That’s the thing we didn’t like about our old Renogy 100 watt portable system—we had to pack it up when it started to rain. When you think about it, it really doesn’t make a lot of sense to have a portable solar power system that can’t be left out in the rain. Weather is often unpredictable. With Zamp’s solar power system, you can leave it outside and not have to worry about it. 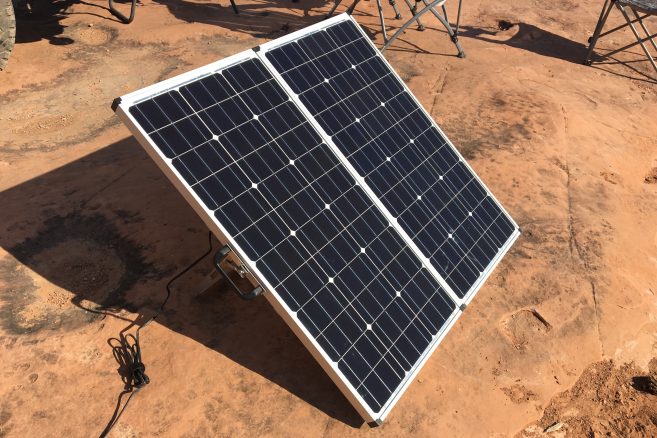