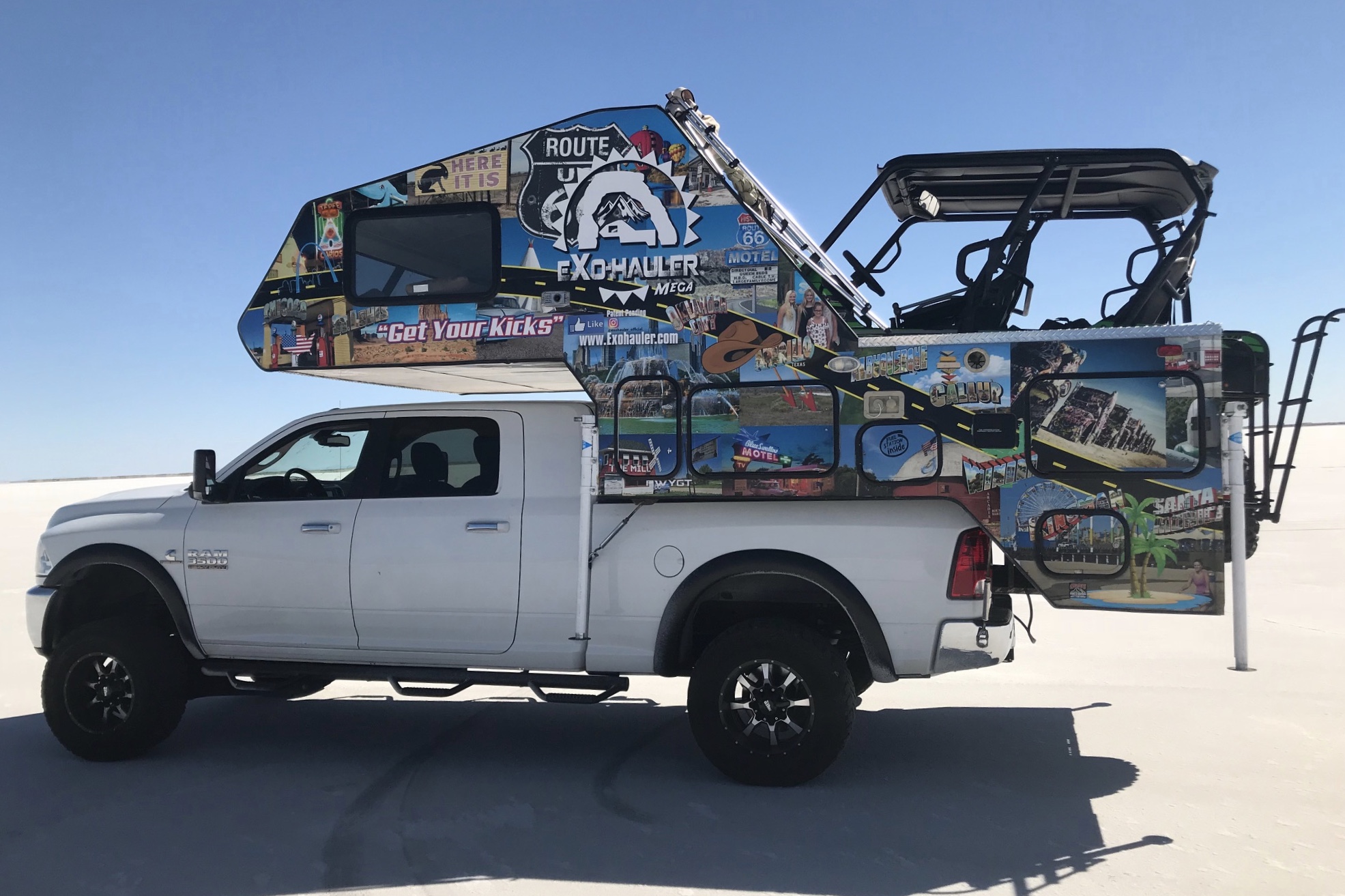 Utah-based ExoHaul Manufacturing just released a new truck camper toy hauler for full-size, short-bed trucks called the ExoHauler Mega. According to the company’s press release, the revolutionary camper not only can travel to favorite, out-of-the-way places, like a traditional slide-in truck camper, but with its large loading deck in the rear, can also haul motorcycles, bicycles, or a quad, like a traditional toy hauler.

In the past, customers had to decide between buying either a toy hauler or a truck camper. Now with the new ExoHauler, customers no longer have to choose between the two.  “We’re extremely excited and proud of the new camper,” said Jason Cofran, ExoHaul Manufacturing owner and designer. “It makes toy hauling and truck camping simple instead of having to drag around a dedicated trailer for toys. It’s so much easier having everything in one.”

Jason just completed a major, 12,000-mile trip with the ExoHauler Mega prototype, touring 17 states and demoing the unit at several RV dealerships. “The camper generated a huge amount of interest everywhere we went,” Jason said. “We got so much interest, you’d think the truck was either on fire or hauling around the Pope.”

In addition to its unique ability to haul toys, the ExoHauler Mega provides most of the amenities found in the standard, slide-in truck camper, including an east-west queen-size bed, a two-way refrigerator, a wall-mounted 5,000 BTU air conditioner, an exterior shower, and a Bluetooth media center with a 32-inch TV. The camper also comes with LED lighting, an indoor/outdoor kitchen, a 35-gallon fresh water holding tank, a power center with a 35 amp converter-charger, and a 4-gallon Suburban water heater. The 9-foot 8-inch loading deck, which also doubles as patio area where you can enjoy the outdoors, is covered with a retractable Bimini top to provide shade on sunny days. Including the interior and the loading deck/patio, the camper provides a whopping 64 square feet of living space. 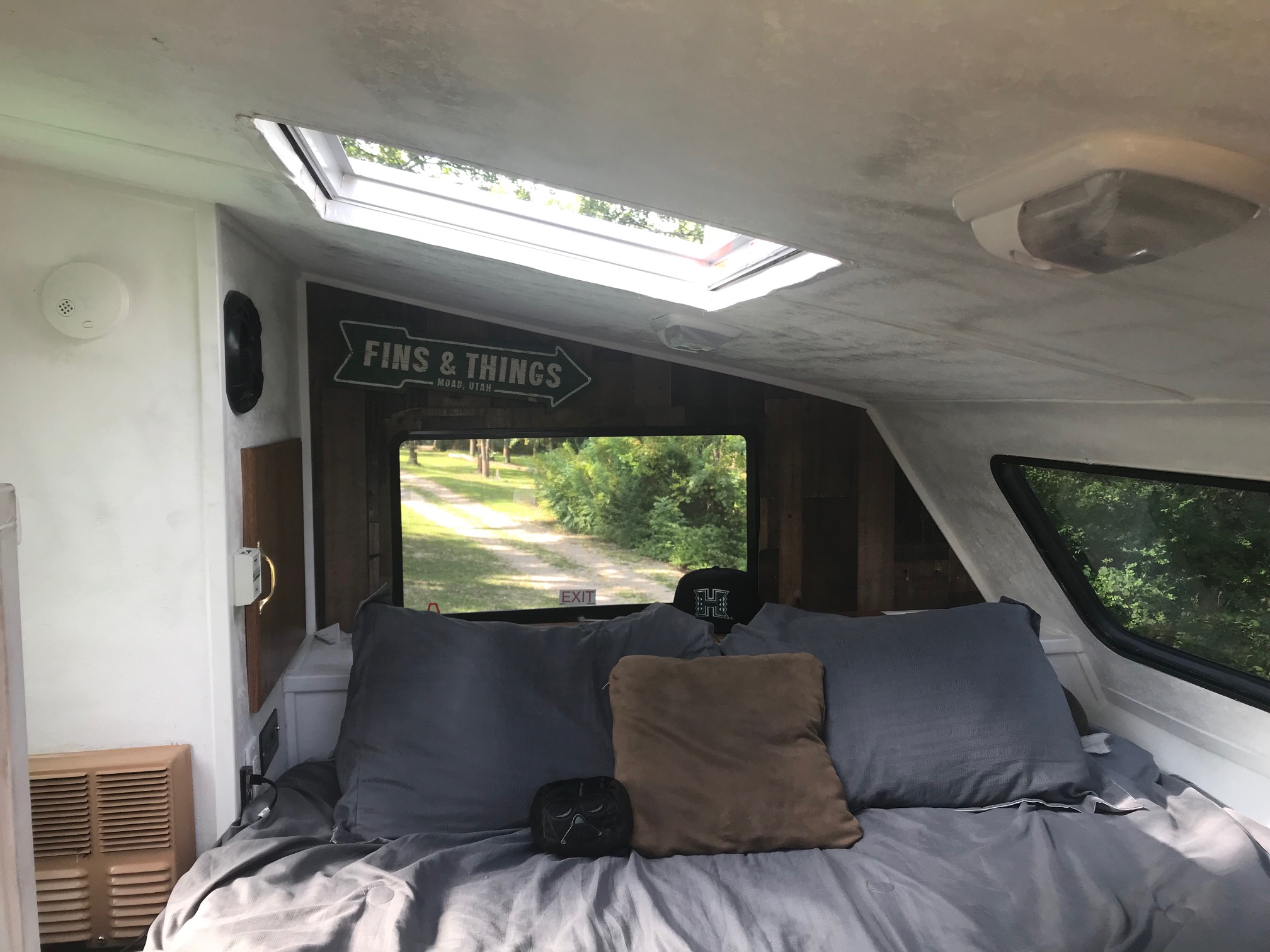 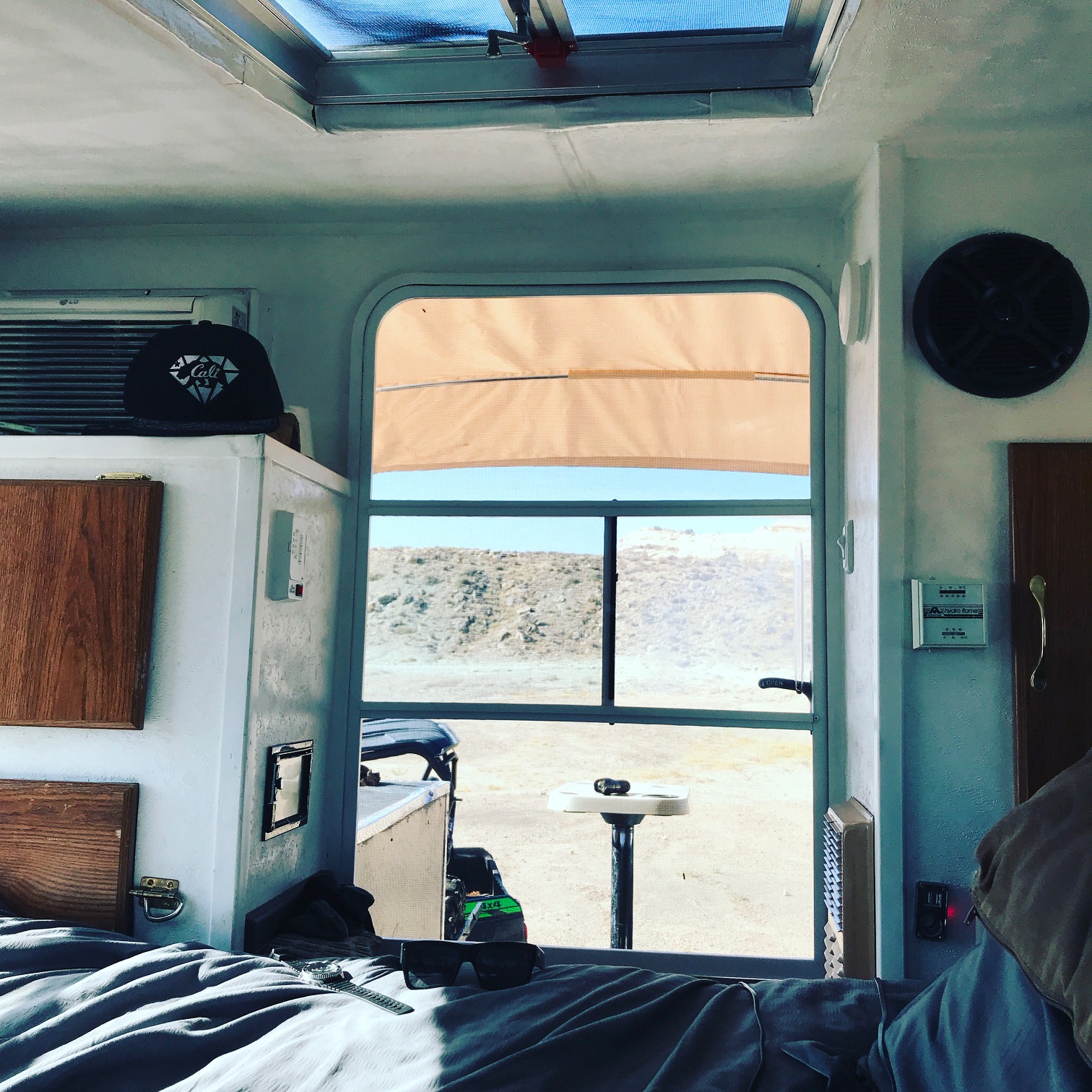 The ExoHauler’s unique structure is built to last. With a dry weight of only 2,000 pounds, the ExoHauler Mega’s frame is constructed of a tubular steel structure capable of carrying between 2,000 and 2,500 pounds of cargo. “The chassis of the ExoHauler is built like a traditional slide-in truck camper chassis,” Jason explains. “But since many four-wheelers are wider than the wheel wells in a truck, we actually have an elevated ramp that goes up and over the rails of the bed. That leaves that whole entire bed cavity open for things like storage, holding tanks, and fuel.”

ExoHaul Manufacturing will be offering a host of options for the new, ground-breaking camper, including a 15-gallon fuel dispensing station, a full cargo cabin enclosure, a three-way refrigerator, Hauler-labeled deep coolers, a cassette or composting toilet, and a special Route-66 “Get Your Kicks” side vehicle wrap. 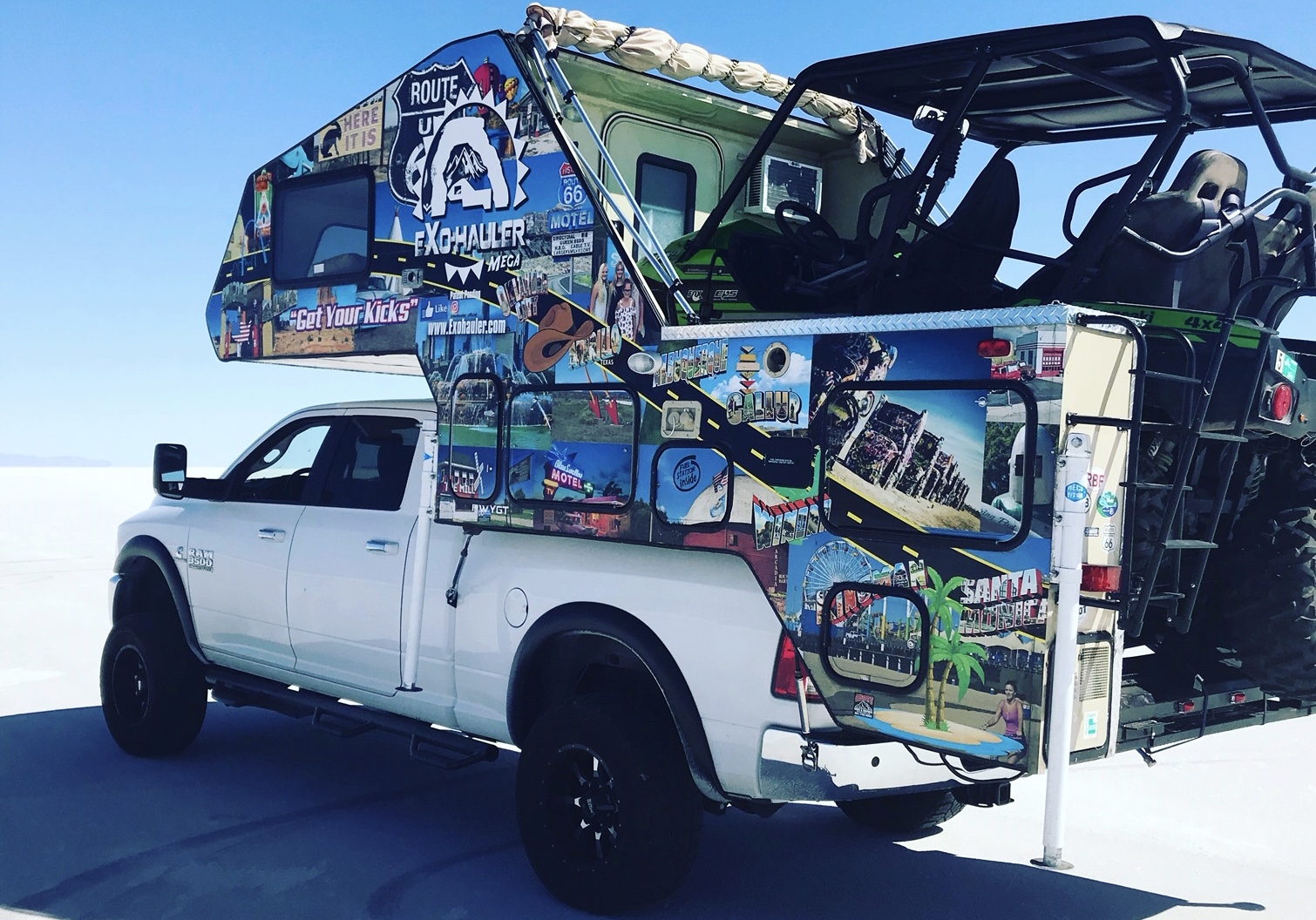 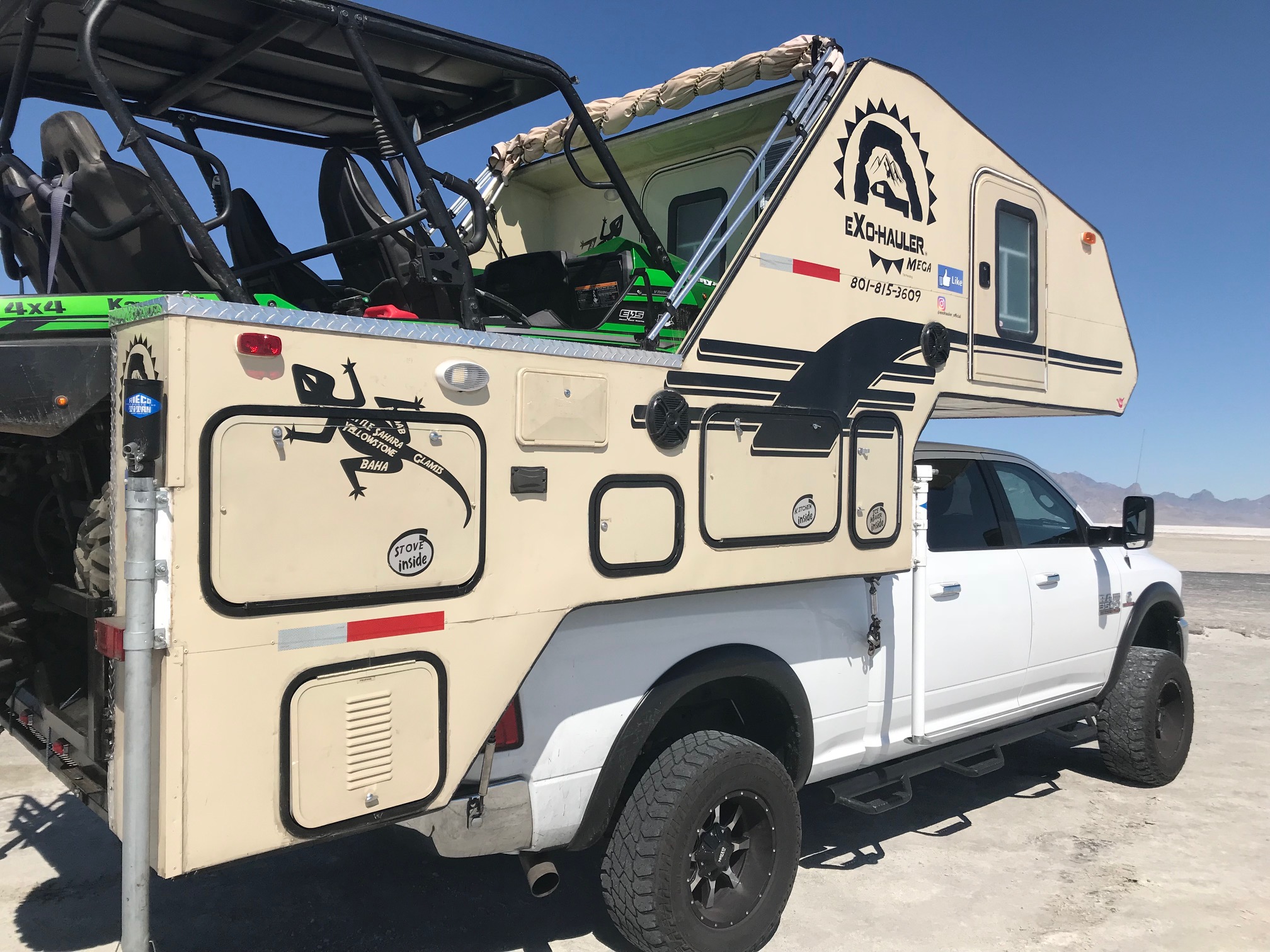 A Question About Riding in Truck Campers

We recently received this question regarding seat belt regulations and whether it’s safe for passengers to ride in truck campers while driving. Hi, Mike! I’m curious if you have any resources on the potential of [read more]