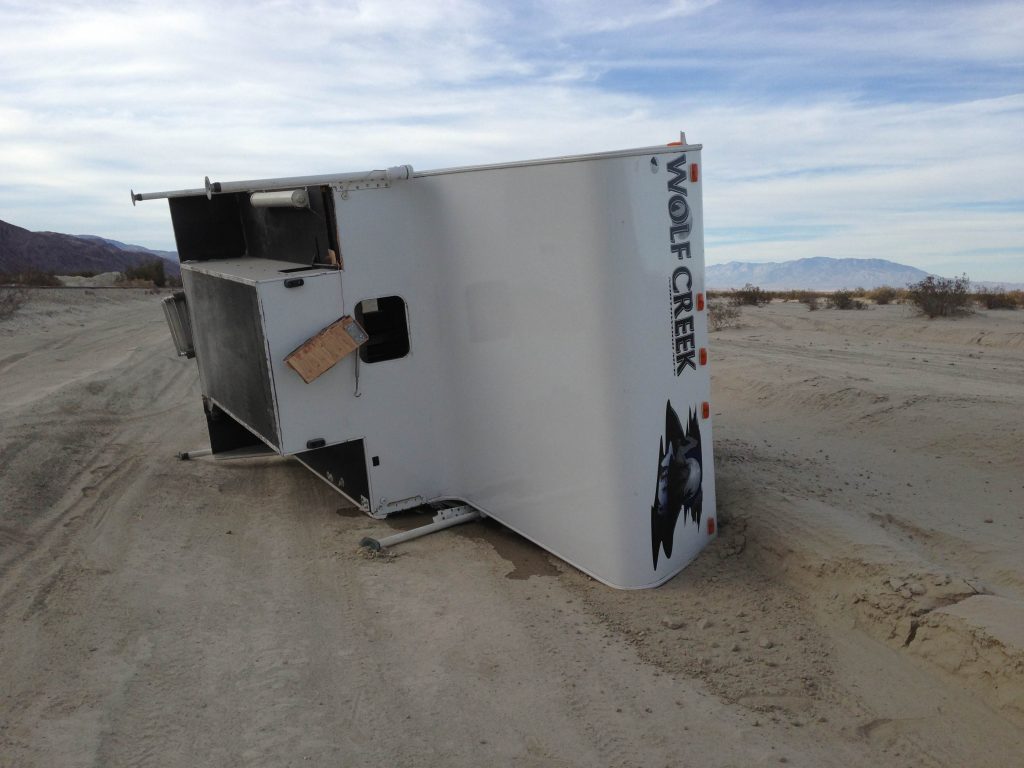 I recently received this question from Gary in California about the Wolf Creek 850 truck camper anchoring system:

Mike, I’m 74 and have a Arctic Fox 29-5T 5th wheel which is too much RV for me. I’m going to sell it. I’m thinking about getting a truck camper, possibly the Wolf Creek 850, but I hear they have had a problem with their attachment system being too weak. With their previous experience I would think they would beef up that area because it is one of the most stressed area in the camper. They keep saying how strong their truck campers are by having a large number of people standing on the roof. That is fine, but it has to be secured to the truck in a manner that makes all the other strength important. Have they fixed that problem yet?

Gary’s question is a good one. I know of two incidents that involved the Wolf Creek anchor bolt system. Before I discuss the incidents, it will be helpful to provide a little background about the Wolf Creek truck camper. The Wolf Creek is made by Northwood Manufacturing, the same company that makes the Arctic Fox truck camper. The Arctic Fox is known for its high quality, but it’s also notoriously heavy and requires a one-ton truck to safely haul it. In order to tap into an even larger truck camper market, Northwood Manufacturing decided to produce a lightweight line of truck campers in 2011 called the Wolf Creek. The Wolf Creek is light enough to be hauled by capable half-ton as well as three-quarter-ton pickup trucks. As you might expect, a lighter camper requires a thinner support structure. Unfortunately, this thinner support structure makes the Wolf Creek anchoring system more susceptible to damage under extreme stress.

The first incident occurred last winter to a California resident at Anza Borrego State Park. While the owner and his two children were returning home after a fun-filled weekend, a sudden, powerful gust of wind took hold of the camper and flung it over the driver’s side of his pickup truck. At the time of the incident the owner was using HappiJac tie downs and HappiJac turnbuckles (Northwood Manufacturing recommends using only the Torklift frame mounted tie down system). According to the owner, the passenger side rear HappiJac tie down on the truck completely failed along with the front passenger side anchor bolt support structure on the truck camper. As you can see in the photos, the anchor bolts in the Wolf Creek 850 are secured to thick plywood panels under the camper’s wings. You can also see that there is a splice in the plywood directly adjacent to the front anchor bolt. It appears that this splice was unable to contain the excessive force exerted upon it. 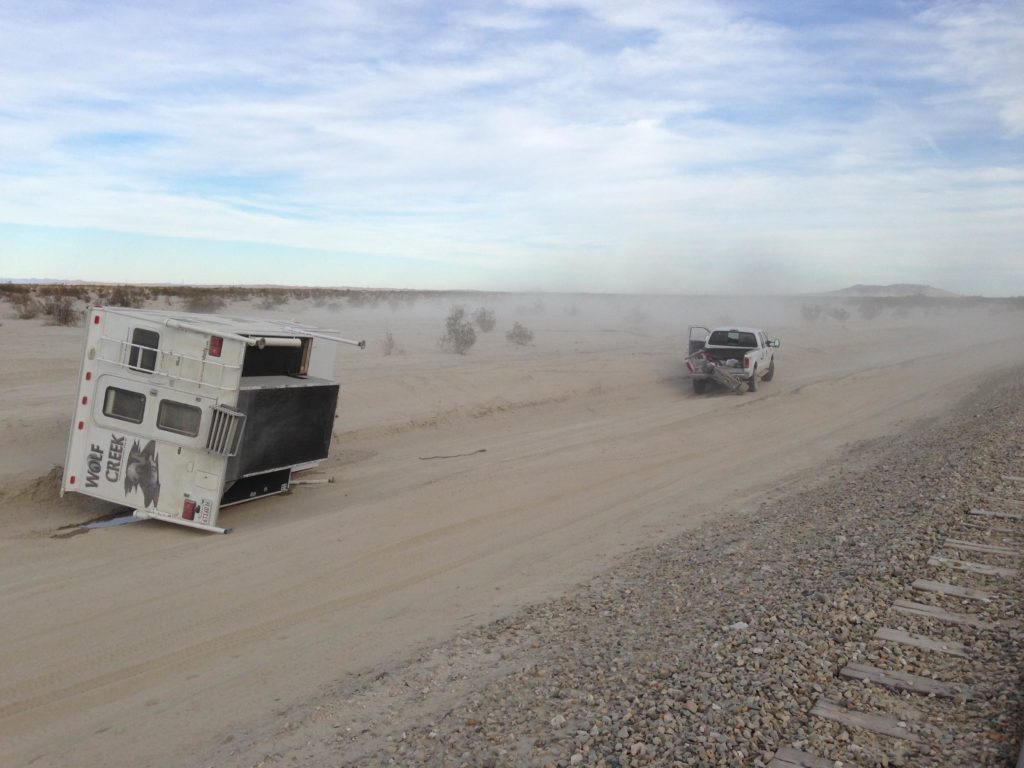 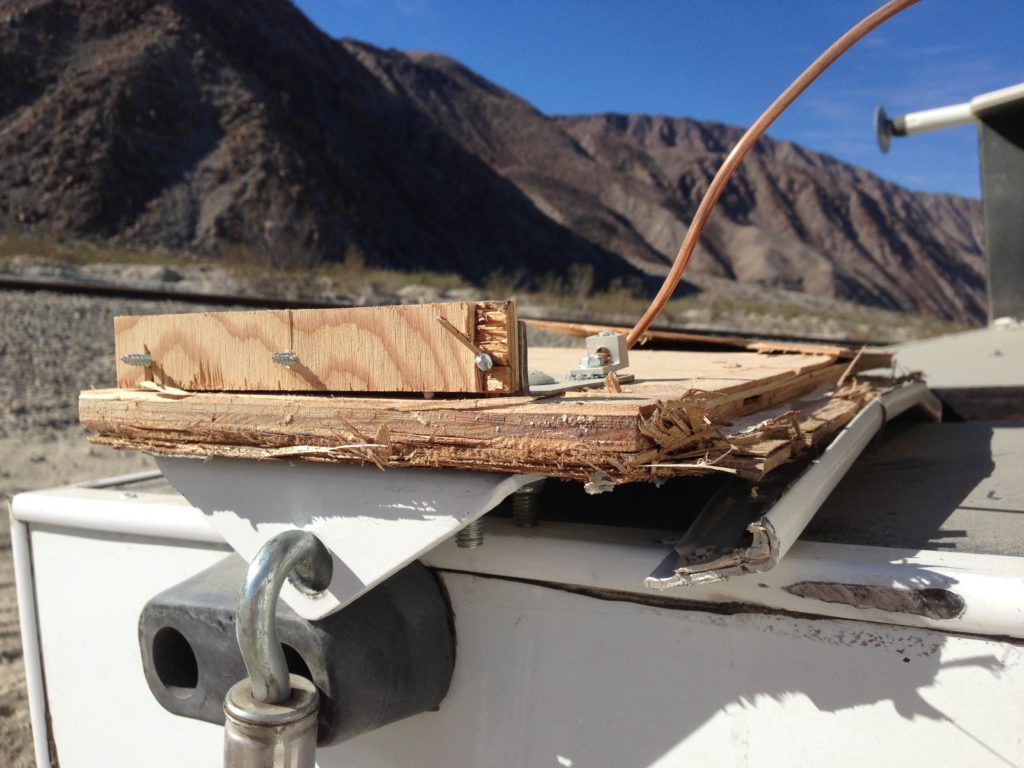 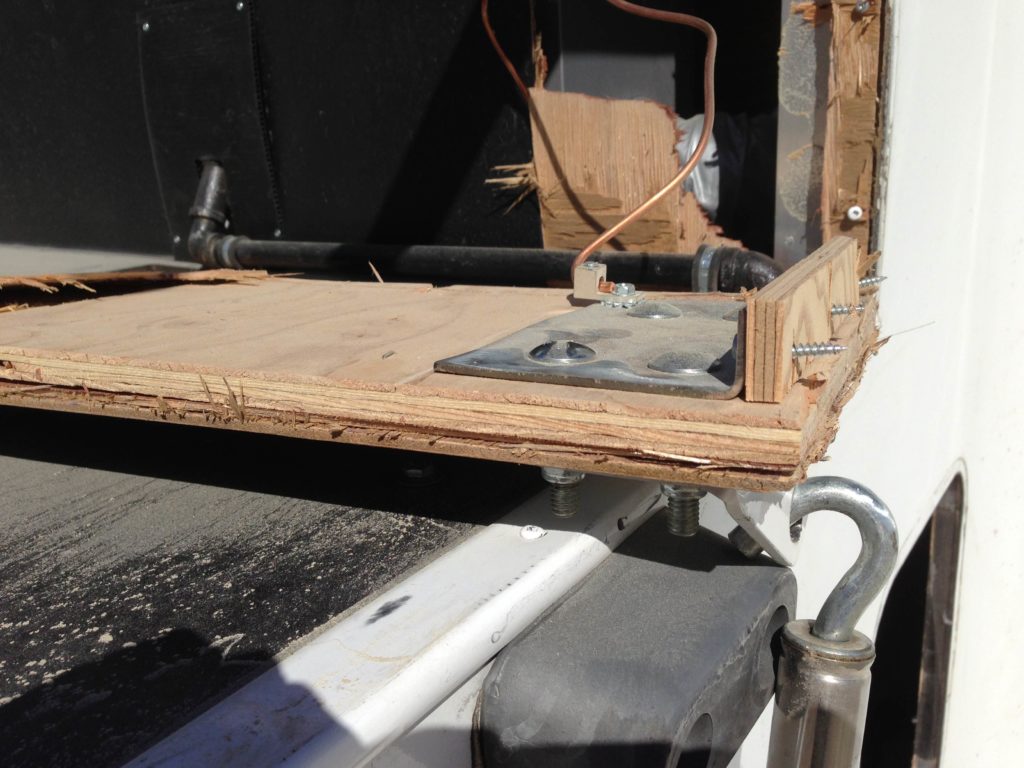 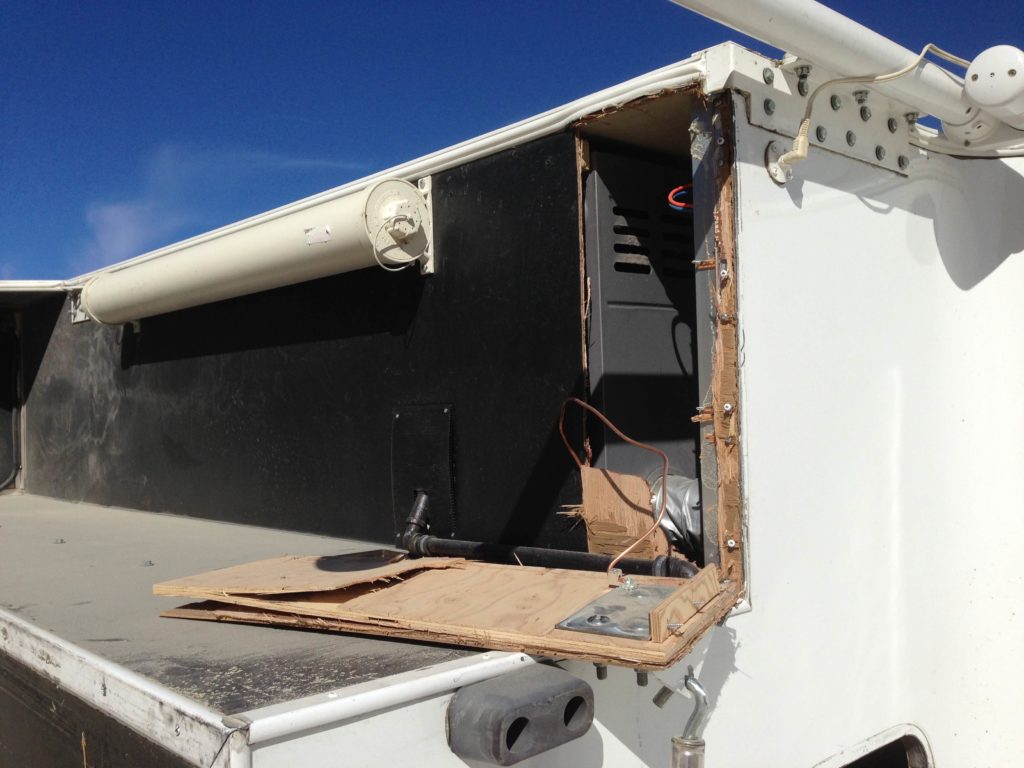 This incident occurred due to three factors, a “perfect storm” if you will. First, the excessively strong wind gusts in the area. Anza Borrego State Park is known for for it’s high winds with gusts sometimes in excess of 80 mph. Second, failure of the HappiJac tie down attachment point on the pickup truck’s rear bumper. And third, failure of the Wolf Creek camper’s front anchor point. Both the truck and camper were considered a total loss by the owner’s insurance company. Remarkably, the truck camper suffered no major structural damage from the incident, a testament to Northwood Manufacturing’s high build quality. I should also point out that this particular Wolf Creek 850 was a long-bed model. It’s also worth noting that the owner has since received a brand new 2014 model and is reportedly very happy with it.

The second incident happened this past summer to an Arizona resident. According to the owner, the incident occurred while driving home on an Arizona Interstate. The owner happened to notice in his side view mirror that the plywood was separating where the front, driver’s side anchor bolt was located. According to owner, approximately 6,000 miles had been put on the camper in the time that it had been owned and had driven off-road very little. The dealership where the owner had purchased the camper installed HappiJac tie downs in the front of his pickup truck, but the owner wasn’t comfortable using the HappiJac tie down for the rear, so Torklift tie downs were used instead. As you can see in the photos below, the plywood is clearly splitting and separating where the front anchor bolt attachment point is located. Judging from the photos, it appears that the HappiJac tie downs were overtightened and exerted an excessive force while driving at highway speeds to create the separation. Unlike the other incident, however, the failure of this anchor bolt support structure doesn’t appear to be the result of a splice in the plywood. 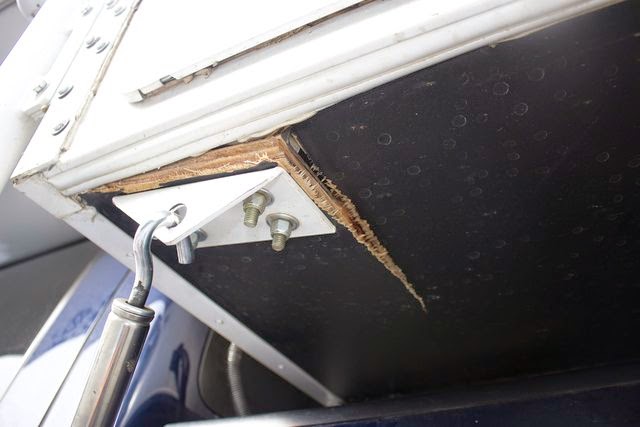 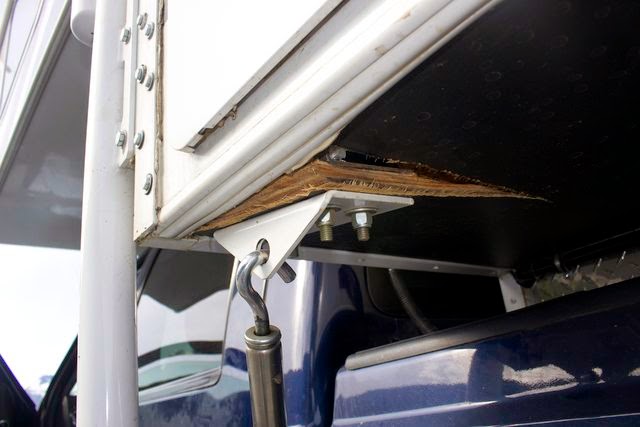 What did Northwood Manufacturing have to say about this one particular incident? Well, according to the owner, a company representative said that this damage wasn’t covered under warranty because “they have no way of knowing what forces were put on the tie downs.” Northwood recommended that the owner claim the damage on the owner’s insurance. The representative also told the owner that “Arctic Foxes are not built this way, that they are tied down to the floor and walls.” Like the first incident, the Wolf Creek 850 camper in this particular incident was a long-bed model.

What do I think about this issue? Well, first off, I own a short-bed model of the Wolf Creek 850. I’m not exactly sure if having a short-bed model makes a difference, but it might since plywood splices aren’t necessary for the short-bed wings since they’re a good 2 feet shorter because of the side storage boxes. All I know is that in the three years I’ve owned by Wolf Creek 850, I’ve experienced zero problems with the anchor bolt system. I’ve driven on very rough dirt roads as well as in areas where wind speeds in excess of 70 MPH were encountered. I also use the Torklift frame mounted tie down system for my camper, which is the system Northwood Manufacturing recommends using in their Wolf Creek brochures. Overall, I’ve been very happy with my Wolf Creek 850 and said so in a full-length review that I wrote in November 2011.

As for the causes of the two incidents, I believe that the HappiJac tie downs were a contributing factor. Why? Because the HappiJac front tie downs exert undue force in the forward direction, not a good thing for the Wolf Creeks, whereas the Torklift tie downs exert a force downward (this isn’t to say that I think that the front HappiJac front tie down system is inferior in any way. It just isn’t compatible with the Wolf Creek anchor design). However, I do have serious reservations about the HappiJac rear tie downs, especially with the thin bumpers being produced by today’s automakers. I’ve known several people who have experienced failures with the HappiJac rear tie downs or have experienced warped rear bumpers from the tension. It simply isn’t a very strong or secure attachment point.

Another contributing factor in these two incidents is excessive turnbuckle tension. This may have played a role in the first incident and probably played a big role in the second. In the second incident, it’s hard to believe that simply driving down the freeway would cause the plywood to split in the manner that it did. The owner stated that he didn’t take the camper off-road very much. The only things that could cause this type damage is either an overtightened turnbuckle or excessive head winds. The owner mentioned nothing about excessive winds on his trip home, so it appears that overtightened turnbuckles is the culprit. Over tightening is actually a common mistake made by newbie truck camper owners. There’s no need to go medieval on them, they only need to be snug (refer to your manufacturers instructions to achieve proper tension).

The final factor in these two incidents is, of course, the Wolf Creek anchoring system. I do think that Northwood Manufacturing can improve the design. As you can see in the photos above, the anchor bolts are not bolted through the camper’s frame. Instead, they’re bolted through reinforced plywood on the wings, the thickness of which appears to be a couple inches thick. This design simply isn’t strong enough to resist the extreme forces that are sometimes exerted upon them. In my view, a good solution would be to weld or bolt an aluminum plate to the frame where the front tie down points are located. The anchor bolt would pass through the plate in addition to the existing plywood support structure.

That’s my take on the matter. To get Northwood Manufacturing’s take, I spoke with Doug Karr, Northwood Manufacturing’s “Truck Camper Guy.” Doug admitted that there was a problem with some of the early Wolf Creek anchoring, but the design and process has been incrementally improved since then. He said that if you use a frame mounted tie down system and apply the correct amount of torque to the turnbuckles, you will avoid problems. Doug also brought up the fact that this isn’t a widespread problem and that only two incidents have been reported of the hundreds of Wolf Creek campers that have been manufactured and sold. If you do encounter a problem, however, Doug said that Northwood Manufacturing will do everything they can to make the problem right. He encourages those who encounter issues to contact him directly. To reach him call Northwood Manufacturing at (541) 962-6274 then ask the receptionist for Doug’s cell phone number.

So to answer Gary’s original question, has Northwood Manufacturing fixed the Wolf Creek anchor bolt attachment system? The answer is yes and no. During the three years of the Wolf Creek’s existence, the anchoring design has been improved, but in my opinion the fixes don’t go far enough. A design that bolts through the frame is what is really needed. Until Northwood Manufacturing makes that change, I recommend using the Torklift frame mounted tie down system and refrain from over tightening your turnbuckles. This approach has served me well in the three years I’ve owned my Wolf Creek 850 and should serve you well, too.

Few things are more satisfying than embarking on a trip where the journey is the primary goal. Sure, reaching that special destination can be enjoyable in its own right, but the journey for many truck [read more]

When it comes to RV shows and truck campers, nothing beats the Overland Expo West in Flagstaff. Sure, you can find a handful of truck campers at the Elkhart RV Show and perhaps six or [read more]

After a 16-month hiatus due to the COVID-19 pandemic, Truck Camper Adventure is happy to report that the 2021 Overland Expo West in Flagstaff, Arizona, went off without a hitch with over 30,000 people attending. [read more]