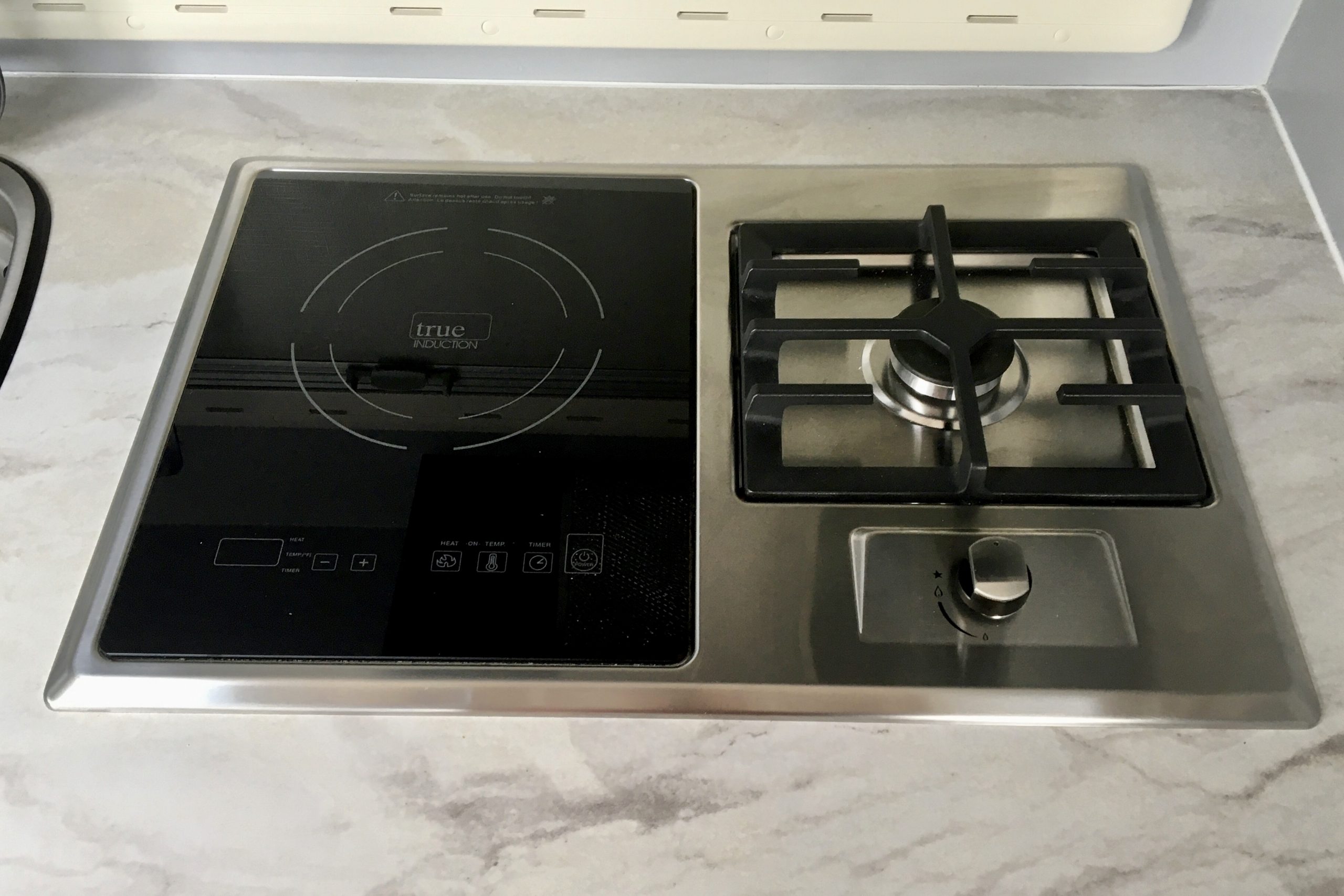 My, how times change. The idea of using electricity to cook in an RV would have seemed crazy 10 years ago, but not anymore. What changed? Advances in lithium battery technology and the popularity and availability of RV induction cooktops. We’ve already discussed the benefits of lithium ion batteries in previous articles, so there’s no need to discuss them again here. Induction cooking, on the other hand, is a technology that is still obscure in many circles. In this article, we will provide a review of the True Induction Dual RV Cooktop and how induction cooking works.

What is Induction Cooking?

Induction cooking sounds high tech, but it’s actually old technology. It was first introduced at the Chicago’s World Fair in 1933, yet how induction cooking works is pretty cool. It uses 110 volt AC and a copper coil to directly heat the cooking pot or pan through electromagnetic induction, a process most of us learned about in high-school electricity and electronics classes. Turning the burner on will not generate any heat. A magnetic pot or pan is needed in order to induce heat that will cook the food. Typically, this means using a pot or pan made out of cast iron or magnetic stainless steel. An easy way to test if your pot or pan is magnetic is to hold a refrigerator magnet up to it. If it sticks, your pan will work on an induction cook top. Most induction cook tops are rated to operate at a maximum of 1,600 watts AC.

Over the last six years, induction cooking has grown in popularity in recreational vehicles. Big-name manufacturers like Thor, EarthRoamer, Global Expediton Vehicles, Nimbl Vehicles, and Bundutec are now offering this electric cook top either as a standard feature or as an option. Portable induction cook tops are gaining in popularity as well and is an excellent option for those who aren’t willing to take the leap on a permanent installation. In fact, our first induction cook top was a portable unit that we bought at Costco for $69.

Why is induction cooking great for RVs? The biggest benefit of induction cooking is speed. Because no heat is lost, induction cook tops will bring water to a boil in half the time of a gas stove. This means food cooks faster, thus requiring less electricity (and battery power off-grid) to operate. The temperature of an induction cook top is easier to control as well and is safer to use because only the pan gets hot—the cook top itself cools off almost immediately after use, greatly reducing the chances of getting burned after cooking is complete. Not only that, induction doesn’t heat the camper up like propane cook tops are prone to do in the summer, nor does it require a fan to keep the RV aired out during cooking. If you’re sensitive to propane fumes and the byproducts of cooking with propane—read carbon monoxide—this is a huge plus.

Are there any cons associated with induction cooking? We already mentioned two—the special magnetic cookware needed and the 1,600 watts required to operate one—but there are two more, though neither is what we would call a show stopper. Most AC circuits in RVs are rated for either 15 or 20 amps and will max out at either 1,800 or 2,400 watts respectively. If you have two high amp draw devices, such as a hair dryer, curling iron, and induction cook top in use at the same time, you’ll risk tripping the circuit breaker or blowing a fuse. Not a big deal, but something you should still be aware of before taking the leap. The other con relates to the act of cooking—food cannot be charred since there is no flame. For those wanting to roast peppers or marshmallows on an open flame, induction cook top can be a setback.

After looking at various makes and models of induction cook tops for our new Bundutec Roadrunner, we opted to go with the True Induction TI-1+1 model. It consists of an induction burner on one side and a propane burner on the other. This particular cook top, measuring 17 inches long x 25.25 inches wide x 4.2 inches high, is made of ceramic glass on one side and stainless steel with a removable cast-iron grill on the other. On the highest setting, it consumes 1,600 watts with a temperature range between 150 and 450 degrees F. The True Induction Dual Cook Top is easy to use. The controls allow us to raise or lower the heat by pressing the up or down temperature button. Each press of the button displays the temperature digitally in either Fahrenheit or Celsius, which in turn changes the temperature of the burner almost immediately. The control pad also has a timer to allow you to cook for a set time while attending to other things.

We really like the versatility that the True Induction “one-plus-one” provides our camper. The cooktop’s induction side allows us to cook in winter without having to run a fan to keep the camper aired-out and cook in the summer without heating up the camper. But the propane burner offers one big benefit that the induction burner doesn’t—the ability to cook off-grid when solar power is unable to keep our batteries charged (last summer we actually went a whole week without the ability to recharge our batteries due to overcast skies). This is one reason why we decided to go with a 1+1 cook top rather than having one with two induction burners. The other? So we can use our Omnia stovetop oven (the Omnia doesn’t work on induction cooktops). The versatility of having both types of cooktops is nice plus the cook top at Bundutec is only an additional $240 over the standard two-burner propane cooktop.

In order to operate an induction cook top in your camper you will need a source of 110 volts AC. This can be provided through either shore power, a generator, or a pure sine wave (PSW) inverter to convert DC to AC. For those who are interested in induction cooking off-grid, we recommend outfitting your rig with a capable 12 volt battery system and an effective way to keep them charged—either generator or solar—along with a 2,000 watt PSW inverter. For example, the setup in our Bundutec Roadrunner consists of a 360 amp hour lithium (LiFePO4) battery, a 500 watt solar power system, a 3,000 watt inverter with a built-in transfer relay, and a separate AC circuit breaker box for the inverter and all AC outlets in our camper. With this setup, we have an unlimited means of powering our camper as long as we have ample amounts of sun. All of our systems—water, heat, refrigeration, and cooking—run primarily or can run on electricity (the Truma Combi Eco Plus can run on either propane or AC). Propane cooking is basically used as a backup when we’re boondocking.

Cooking with propane has been the norm in recreational vehicles for well over 70 years, yet that paradigm might be changing with the advent of lithium batteries and the growing popularity of induction cooking. We used to drool over the wondrous capabilities of the EarthRoamer and the massive electrical and off-grid system each rig was equipped with. With the advent of the lighter, more powerful lithium ion battery, however, all of that has changed. Even a “small” hard-side truck camper like our Bundutec Roadrunner can pack a powerful punch with lithium essentially doubling the capacity of old lead-acid batteries of the same size. Couple that capability with a good solar power system and the capabilities of the True Induction 1+1 Cook top, and you’ve got yourself a capable rig for a tiny fraction of the cost. This concludes our review of the True Induction Dual Cooktop.

With all of the sun we get here in the southwestern U.S., it makes a lot of sense to go solar to maintain and recharge your RV’s batteries. Yet, one of the biggest complaints I [read more]