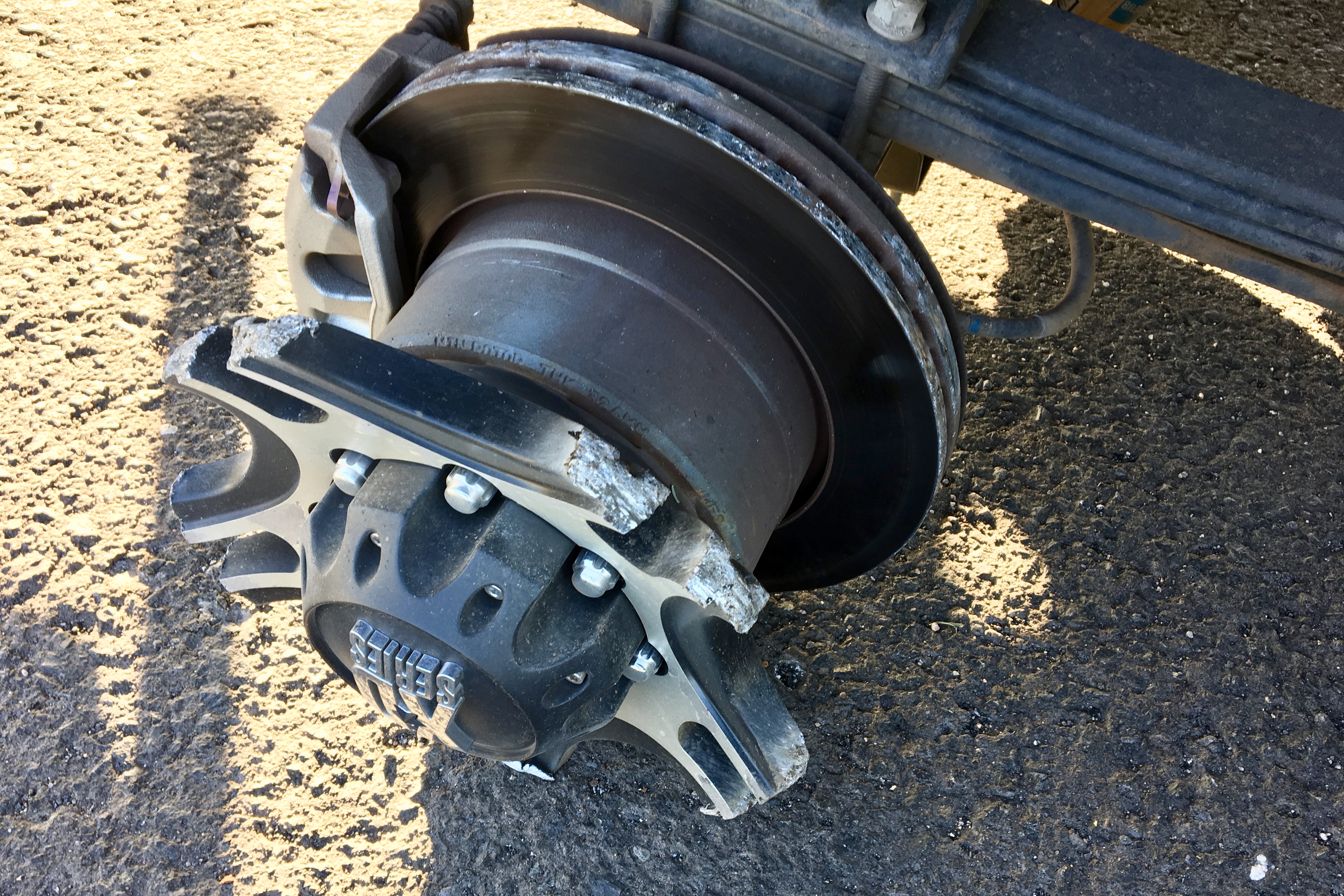 I remember the day well. It was Friday, September 21, 2018, late afternoon. We were returning to our campsite in Flagstaff, Arizona after an eye appointment in the nearby town of Cottonwood. My eyes were still dilated from the exam, so the wifey was behind the wheel. We were traveling north on Highway 89, a few miles south of Sedona, when suddenly, a loud boom and roar was heard and the truck started to vibrate violently. “Looks like a blowout,” I said, as Karen started to slow down and pull over onto the right shoulder. “And there’s the tire,” she yelled, as her eyes caught some kind of movement out the passenger side window. She was right. Through my still blurry eyes, I was shocked to see one of our tires rolling and bouncing at high rate-of-speed in the scrub about 30 feet from the road.

After pulling over and engaging the emergency flashers, we jumped out to get a look. A quick survey revealed what had happened. Most of the passenger side rear wheel and tire was missing from the truck—it was gone—the outer part of the wheel was completely separated from the rest of the wheel. What we saw bouncing in the bush was the missing part of the wheel. “Crazy,” I said to myself as I let the gravity of the moment sink in.

I was proud of the wife. She handled the incident like a pro, but this was no ordinary blowout. This was far worse. The noise, vibration, and stress of this “blowout” would’ve freaked out some, but not Karen. Amid the noise and chaos, she did a terrific job maintaining control of the truck and camper and getting the rig safely pulled over to the side. She’s got nerves of steel, probably the result of raising four boys.

Getting the “tire” changed proved to be the biggest challenge of the entire ordeal. Due to the wheel failure, the jacking point was only a few inches from the surface of the road, making it impossible to get a standard bottle jack underneath to change the tire. Because of this we had to call a tow truck for help, which took a good five hours. More about that later. After the tow truck arrived, the rear of the truck had to be lifted with the truck’s hydraulic ramp so that a couple of jacks could be placed underneath the truck. Once that was done, changing the tire was easy and we were on our way within 30 minutes.

Why Getting the Right Wheel Matters

So why did the rear passenger side wheel fail? Because the wheel was overloaded. We know how important load ratings are and preach it all of the time, so how could something like this happen? Because the wrong aftermarket wheels were put on the truck. We specifically ordered a KMC wheel with a load rating of 3,640 pounds, but this isn’t what we got. What we discovered after the incident is that the actual load rating of the 18-inch wheel on our truck was a lowly 2,500 pounds. According to a recent CAT scale visit, our rear axle, with the camper, weighs a good 6,120 pounds. That’s 1,100 pounds over the 5,000-pound load rating of the two wheels installed on the rear axle of our truck.

Most of us know how important tires are to the safety of your truck camper rig, but as you can see, the wheels are just as important. Overloading can result in either a catastrophic failure that not only can damage your truck and camper, but end your life. We were lucky our “blowout” didn’t result in something more serious to ourselves or someone else sharing the road with us (imagine what could’ve happened if this incident happened on a busy, multiple lane highway?). Besides the wheel, the only real damage that we suffered was a ruined brake rotor, a repair that set us back $259. Of course, we also had to buy a new set of Ion 134 wheels (model 134-8970MB 18×9) with a 3,640-pound load rating for $862. We eventually got a set of Cooper Discoverer AT3-XLT tires to go with those new wheels. Expensive repairs, yes! But it could’ve been much worse.

So what are the big take aways? What can we learn from this incident? Three immediately come to mind. First, make sure your tires are appropriately rated for the weight. For most of us with standard hard-side truck campers, that means having either Load Range E or F tires with a load rating of 3,640 pounds (10 ply, 80 psi) or 3,960 pounds (12 ply, 95 psi) respectively (half-ton trucks with small pop-ups can get away with Load Range D tires). For those who are hauling larger truck campers with multiple slide-outs, that usually means having Load Range H tires (16 ply) with 19.5-inch wheels. If you haven’t actually verified your tire load ratings, you need to do so. Better late than never.

Second, make sure your wheels are appropriately rated for the weight. Verify the load ratings of your aftermarket wheels with your sales rep before purchase and make sure the right wheels are put on your truck (ordering them online yourself and taking them to the tire shop might be an even better alternative). We bought our KMC wheels at Discount Tire, but this mix up could’ve happened at any tire shop. Make sure that your sales rep understands that you’ll be hauling a truck camper weighing thousands of pounds. Better yet, show him or her a CAT Scale printout showing the actual weight of your loaded rear axle (if you haven’t taken your rig to the scales, do it). Don’t take their word for it on the load rating, make sure that YOU see the load rating in black and white before you pay for them. Doing so will save you embarrassment, grief, or something worse. This is why getting the right wheel matters.

Third, conduct periodic inspections of not only your tires, but also your wheels. We faithfully inspected our tires each time we fueled up, but honestly these inspections didn’t involve the wheels as much. Problems can be detected early if your periodic inspections include the wheels also. Make this a part of your daily or weekly routine. If we had inspected our wheels more, we’re certain we would’ve discovered the cracks in the wheel before the wheel completed failed. Indeed, the other rear wheel that we had replaced had one crack in it so that one would’ve failed eventually too.

So why did it take a whopping five hours to get a tow truck? USAA Roadside Service was great in getting a truck out within a couple of hours, but the local towing company refused to help us because they didn’t want to be liable for any damages that may have arisen from driving with a damaged brake rotor. The next truck, which came from Prescott, took another two hours, but that company didn’t want to help us out either because of the damaged wheel and because we had a camper on the back of the truck. This is something that USAA should’ve explained to the Prescott-based towing company, but didn’t. It took another hour for the next tow truck to arrive, which actually turned out to be the first tow truck that refused to help us. Before they would help us, we had to sign a form releasing them of any liability should we have an issue with the damaged rotor. This turned out to be a non-issue as the truck made it to nearby Sedona without any problems.

So, you want to build a great overland expedition truck camper rig to explore the world and get far off the beaten path? We don’t blame you. A well-matched, properly outfitted truck camper rig will [read more]

Looking for a quick and easy way to improve the off-road performance of your truck camper rig? Try airing down your tires. Sure, you can spend big bucks on flashy, double barrel King Shocks, on [read more]