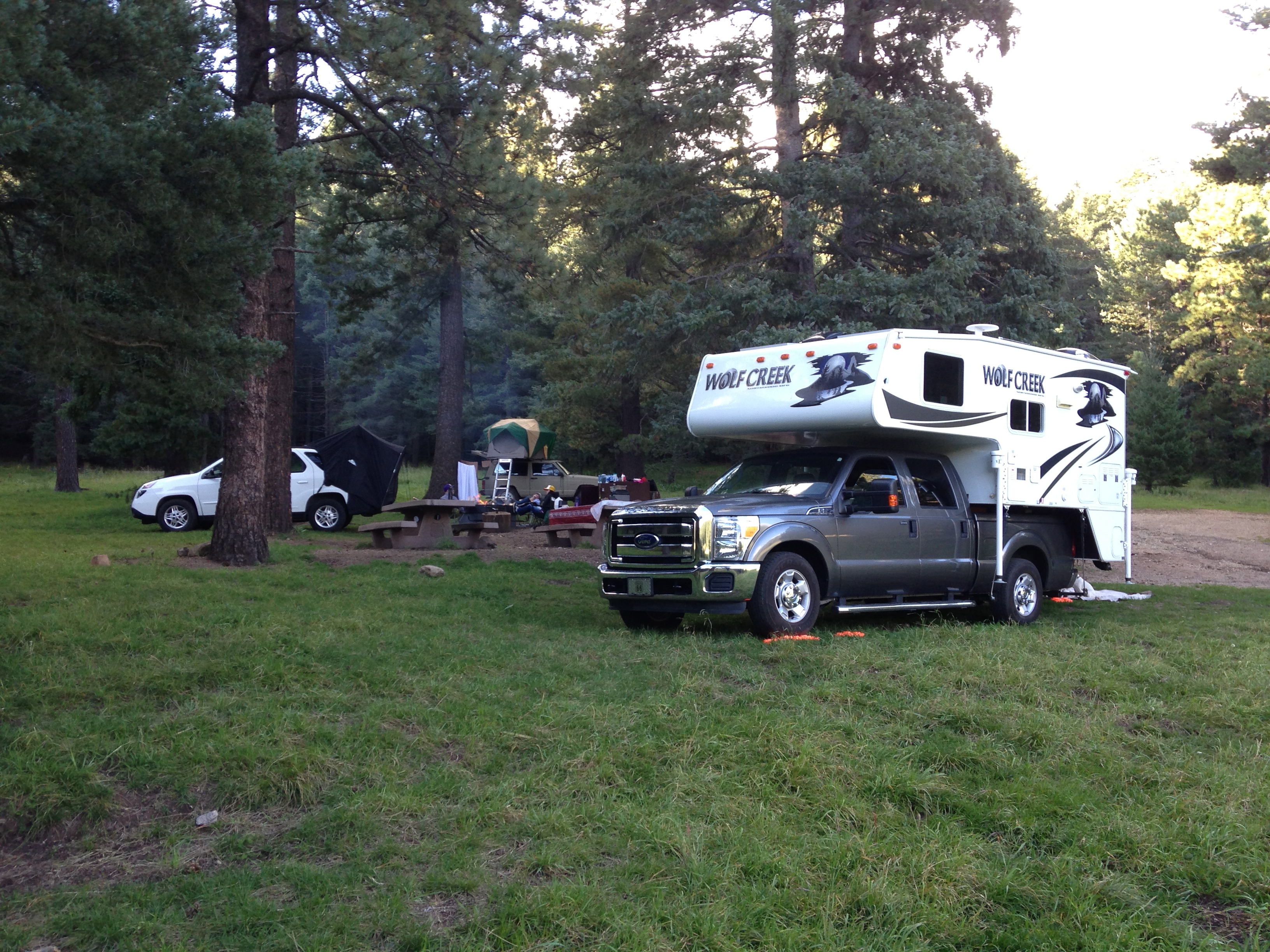 For months my sons, who have been attending Eastern Arizona College, have been telling me what an incredible place Mount Graham is for camping and fishing. The place sounded great, but I kept putting it off because the trip to Mount Graham is four hours long for us, twice as far as it is to the Mogollon Rim where we do most of our summer camping. Well, with my boys back in school we decided to take a long weekend and spend some time with them up on the mountain to see for ourselves.

I have to say, I was pretty impressed. Located in Southeastern Arizona, Mount Graham is rugged and heavily forested with its tallest peak reaching 10,720 ft. The mountain is located in the Coronado National Forest, so you can boondock anywhere you like as long as there are no signs that prohibit it. Developed campgrounds can be found at 6,000 ft and 7,000 ft, but the best camping is at 9,000 ft where several free, undeveloped camping areas can be found. We boondocked in Treasure Park, one of these undeveloped camping areas. Here most of the camping sites have a picnic table or two, a fire ring, and a metal bear box where you can store food and garbage. We didn’t see any bears or racoons during our stay, but we did see plenty of deer and squirrels, including the endangered Mount Graham Red Squirrel.

The road to the top of Mount Graham, called the Swift Trail (Route 366), is one of the better scenic drives in the great state of Arizona. The entrance to the Swift Trail is located eight miles south of Safford, AZ off of Route 191. Just look for the signs. About 35 miles long, the Swift Trail is mostly paved and features numerous twists and turns, including several sharp hairpin turns. Because of these extremely sharp turns vehicles longer than 40 feet are prohibited. Be warned, though, with no guardrails the drive requires your undivided attention or you’ll find yourself going off the edge of a cliff. If you have issues with heights then you won’t like this drive. The road is plenty wide for two vehicles, but there are portions of the drive with no shoulders and sheer cliffs. If you can stand the heights, then you’ll enjoy the views. They are pretty spectacular.

At about 9,000 feet the surface of the Swift Trail turns to dirt and gravel. The dirt and gravel road is in pretty good shape though the surface is fairly bumpy in places from water runoff. At this level you’ll find several undeveloped areas where you can set up camp for the night. You’ll also find the only lake on the mountain where you can fish, Riggs Lake. The distance to the lake is approximately 12 miles once the road turns to gravel. We didn’t fish over the weekend, but plan on doing that the next time we visit. I’m told that Mount Graham is the only place on earth where five different species of trout can be found.

Our campsite in the Treasure Park camping area was pretty amazing. We set up camp in a forested area on the edge of a large grassy meadow. The temperatures were perfect with highs around 68 degrees and lows around 50. At first we parked our camper next to a couple of pine trees but we decided to move the next morning at the edge of the meadow so our rooftop solar panels had a better view of the sun. My son, Ammon, parked his Jeep Cherokee between two trees and setup his new rooftop tent that he and his brother, Nathan, recently constructed (they’ll soon be selling them, but for now the design is still being tested and evaluated). Nathan, and his wife Jessica, parked their Buick Aztek and attached tent nearby.

You may be wondering where the Treasure Park name came from. The following is quoted from an historical plaque posted within the park: “Treasure Park is so-called because of stories of buried treasure. Legend has it that in the 1850’s, a large quantity of gold and silver was stolen from mines in Mexico by bandits. It was loaded onto burros, packed into Arizona, and buried here. The burial spot was marked bythree granite stones, colored and placed upright forming a triangle. Around 1909, the forest supervisor, T. T. Swift, discovered three colored granite stones at Treasure Park. Although he dug more than six feet to bedrock, no treasure was found. Like many other lost treasure stories this one has been discounted but it remains a colorful part of Mt. Graham history.”

I was pleasantly surprised to find that at our Treasure Park campsite we had three bars of 4G cell phone service (AT&T). A cluster of radio and cell towers are setup on the nearby peak, which provides service to the surrounding communities. I was also surprised to find a fresh water spigot near the entrance to the Treasure Park primitive camping area. Next time we visit we’ll come with an empty fresh water tank to reduce weight and save on fuel.

About Mello Mike 687 Articles
Mello Mike is an Arizona native, author, and the founder of Truck Camper Adventure. He's been RV'ing since 2002, is a certified RVIA Level 1 RV Technician, and has restored several Airstream travel trailers. A communications expert and licensed ham radio operator, he retired from the U.S. Navy in 2004 as a CWO3 after 24 years, worked in project management, and now runs Truck Camper Adventure full-time. He also does some RV consulting, repairs, and inspections on the side. He currently rolls in a 4WD Ram 3500 outfitted with a SherpTek truck bed with a Bundutec Roadrunner mounted on top. - KK7TCA
Website Instagram YouTube

February 14, 2012, marks the centennial of the great state of Arizona. Did you know that Arizona was the 48th state admitted and was the last land-locked state to be added to the Union? And [read more]

If you’re looking for a moderately challenging 4×4 trail located in central Arizona that also offers beautiful landscapes and diverse terrain, then the Montana Mountain trail is made for you. Located in the world renowned [read more]