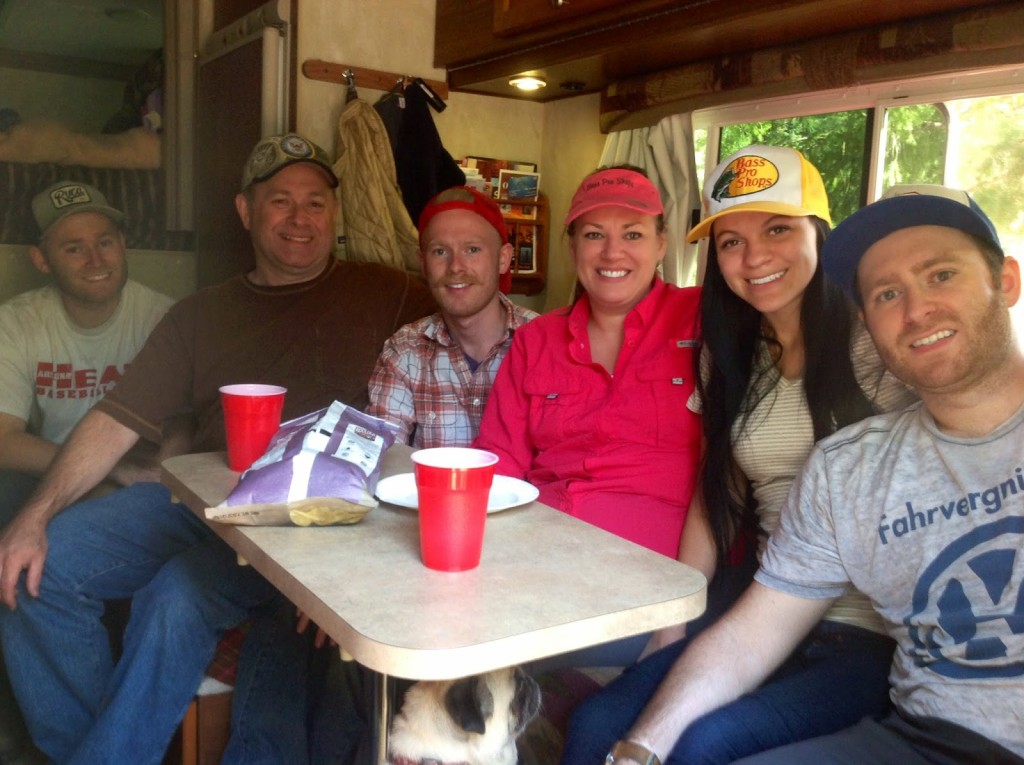 A couple weeks ago the family and some friends got together for a weekend camp out on Mt. Graham to celebrate the end of another year of college. This was our second time on Mt. Graham, the first was last September, an account of which can be found by clicking here.

We had several choices where we could camp but chose to camp where we did last September, in Treasure Park. We had another big group this time out. With me was my wife, Karen, and my sons, Nathan, Ammon, and Daniel. Along with us was Nathan’s wife, Jessica, and her parents, Matt and Brenda, her sister, Holly, and brother, Josh, and his wife, Audra. We also brought the two canine members of our family, Pepe and Abby.

We boondocked in Wolfy, of course. How many people can you comfortably entertain in a Wolf Creek 850 truck camper? The picture above should tell you, and we could’ve easily seated another at the dinette. In spite of the room, the boys decided to camp out in their tents so they had some room to stretch out. Since we brought the dogs with us they needed a place to sleep and it wasn’t going to be up in the bed with us. They simply got too dirty running around outside to do that each night. The temperatures were pretty close to perfect during the weekend, highs around 67 and lows around 50. Unlike the last time we visited,we didn’t get a drop of rain.

The altitude at Treasure Park is at an even 9,000 feet, so if you’re not used to the altitude it can make you feel a little sleepy and tired (it took us about a day to get used to the altitude). You can quickly become dehydrated at altitude as well, so you really need to keep up on the fluids. Treasure Park offers about a half dozen developed sites that include a fire ring, picnic tables, and bear boxes to store garbage and food. The sites can be reserved, but if they’re not reserved, it’s first come, first served. Because of this you need to get there early on Friday before the big weekend rush. As you can see in the pics, the site wasn’t the most level, but it was one of the best there, so we had to break out the leveling blocks to get us at even keel.

In case you’re curious about the name of the park, the following was taken from a historical plaque posted within the park: “Treasure Park is so-called because of stories of buried treasure. Legend has it that in the 1850’s, a large quantity of gold and silver was stolen from mines in Mexico by bandits. It was loaded onto burros, packed into Arizona, and buried here. The burial spot was marked by three granite stones, colored and placed upright forming a triangle. Around 1909, the forest supervisor, T. T. Swift, discovered three colored granite stones at Treasure Park. Although he dug more than six feet to bedrock, no treasure was found. Like many other lost treasure stories this one has been discounted but it remains a colorful part of Mt. Graham history.”

We spent last weekend at Apache Lake, dry camping at the Burnt Corral USFS campground. As you probably already know, I’m not a big fan of campgrounds, in fact I hate them. I’d much rather [read more]

“Sold To Another Happy Camper”

Buying a truck camper wasn’t that big of a decision for me. Even though I really enjoy Airstream travel trailers, I longed for the mobility and versatility of the truck camper. I love to boondock [read more]