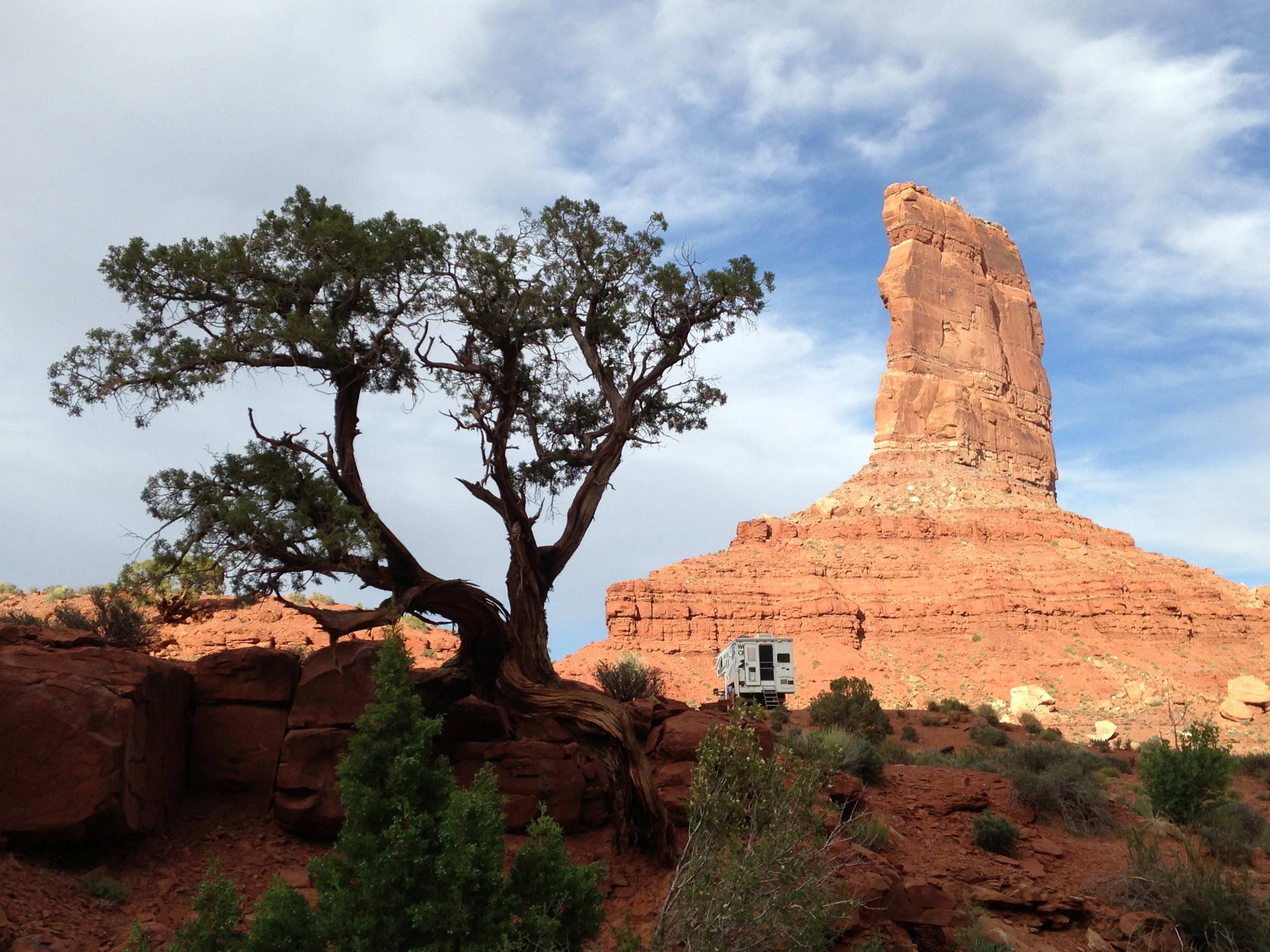 Today, I received a pleasant surprise in my email inbox from Angela White at Truck Camper Magazine. One of the three photographs I entered (Entry #120 on the docket) was one of the 13 contest winners for the 2014 Truck Camper Magazine Calendar Contest! I have to say, this was a bit of a shock. With a total of 386 photos entered in this year’s contest, and with so many terrific entries, I didn’t think I had much of a chance to be selected. Especially in light of the fact this was my third try, the previous two years my photographs failed to even receive an honorable mention.

The winning photograph was taken in late May 2013 at one of my all-time favorite locations in the great state of Utah–the Valley of the Gods. The valley is located on public land managed by the Bureau of Land Management, so boondocking is permitted at designed locations. My wife and I took hundreds of photos during our two-day visit of the valley but this one particular shot of our campsite was taken a few hours before sunset during our first day.

Located on the western side of the valley, the location of our campsite was pretty spectacular. We were nestled between three massive buttes affectionately known as General de Gaulle and his Troops, Santa and Rudolph, and the one shown in the pic, the Castle. We were pretty much alone in the entire valley, only one other RV, a Class B conversion van, was camped for the night.

The photo was taken in a large wash at the end of one of our hikes as we approached our campsite from the west. The combination of the sunlit butte and the blackened mesquite tree caught my eye and was a photo I couldn’t pass up. I’m just glad I had my iPhone on me to take the picture.

Like Loading...
About Mello Mike 668 Articles
Mello Mike is an Arizona native, author, and the founder of Truck Camper Adventure. He's been RV'ing since 2002, is a certified RVIA Level 1 RV Technician, and has restored several Airstream travel trailers. A communications expert and licensed ham radio operator (KK7TCA), he retired from the U.S. Navy in 2004 as a CWO3 after 24 years, worked in project management, and now runs Truck Camper Adventure full-time. He also does some RV consulting, repairs, and inspections on the side. He currently rolls in a 2013 Ram 3500 outfitted with a SherpTek truck bed and a 2021 Bundutec Roadrunner.
Website Instagram YouTube

One of my fondest memories of growing up in Tucson, Arizona was a field-trip I took in the second grade to the Arizona-Sonora Desert Museum. What? A museum as one of your favorite childhood memories, [read more]

We spent last weekend in the Heber and Show Low area in Northern Arizona looking at some properties. We’ve decided to buy an acre or two of land where we can camp for the summer [read more]