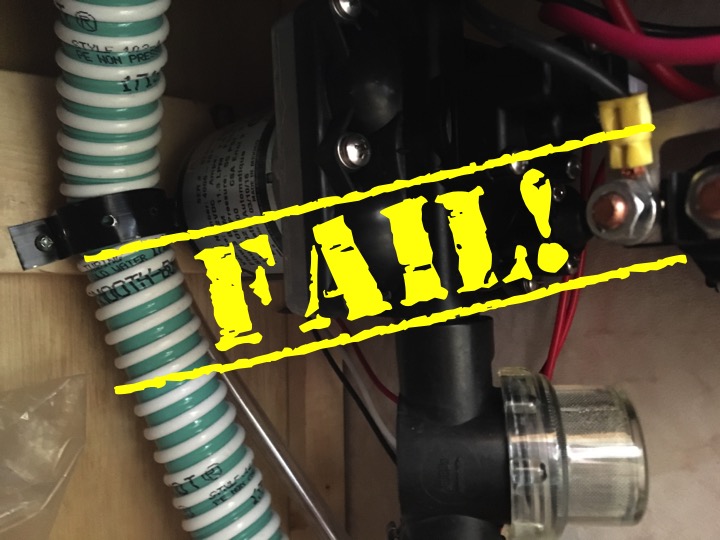 RV water pumps are funny things. Sometimes they can last 10 years or longer; sometimes for just a few months. Usually when they fail it happens at the worst of times, like on a recent outing I went on in northern Arizona. Things were going great. I had stopped for lunch in this neat little spot on Zeniff Road off Highway 277. After enjoying a delicious lunch, it was time to wash the dishes. I walked up to the kitchen sink, put my dishes in the sink, and turned the switch to the water pump on. The pump grumbled. I opened the faucet, but no water flowed, not even a drip! After blurting out a few choice expletives, I checked a few things. The non-stop grumbling of the water pump proved I was getting power to the pump, so it wasn’t an electrical issue. The fresh water tank was three-quarters full, so an empty tank wasn’t the problem either. I thought maybe the water pump filter was clogged, but that was fine, too. Even though it was only 11 months old, all of the evidence pointed to a bad pump.

If you’ve ever had a water pump fail on you, it’s no fun, especially when you’re out on an outing. Fortunately, the water pump failure didn’t ruin my weekend, it was just an overnighter. I had plenty of bottled water with me, but it could’ve been worse if this had happened under different circumstances. There were signs that the pump was going out in the weeks prior, but I ignored them and hoped for the best. The first tell-tale sign were the small leaks underneath the pump. I attributed the small amounts of water that occasionally pooled underneath to filling the water tank (the fill hose runs right past the pump). I should’ve known better, but like I said I was hoping it was something else. The other sign of impending failure was the poor water pressure and loud noises we were getting from the pump when we used it.

Fortunately, replacing a water pump is one of the easiest repairs you can make in an RV. There are only two water connections, an intake water line and one outtake, and two 12 volt electrical connections, one positive wire and one negative. There are also four mounting screws. The repair is as simple as removing the old pump and reinstalling the new one using the same connections. Water pumps, like the Shurflo 4008 that came with my camper, are also pretty cheap and will only set you back about $60 if it’s out of warranty. The only potential complication with a water pump repair is where it’s mounted. In most cases it easy to get to and replace, but in cases like mine, it can be a real pain to reach. You have to be a contortionist to get to it (mine is located underneath the refrigerator in a very tight location). Fortunately, my water pump was still under warranty, so I left the task of replacing it with a local RV repair shop. Lucky me. 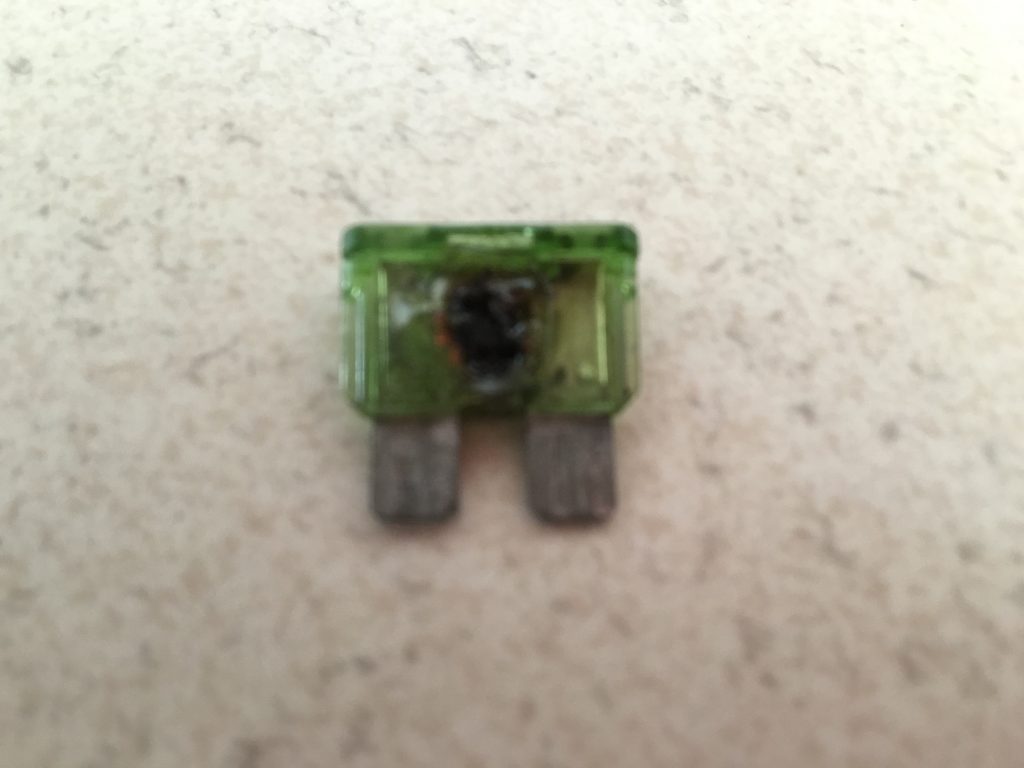 The water pump has been replaced and everything is as good as new again. The only issue I had with the replacement was a blown fuse. The next morning after the repair I noticed that my battery voltage was down to 11.1 volts. Yikes!! My batteries weren’t getting a charge from either the 110 volt AC charger or my solar power system. The battery cutoff switch was on, so that wasn’t the problem. It had to be something else. After checking a few other things, I noticed that the 30 amp inline fuse between the battery and the main fuse panel had blown. Evidently, the bad water pump had generated high resistance or the pump’s wires had shorted out sometime during the installation. I’m not sure why the water pump fuse in the 12 volt fuse block didn’t blow. Maybe it did and was replaced by the technician. Anyhow, after removing the inline fuse, I was shocked that the fuse had actually melted. Good thing the fuse was there to protect the wiring and the batteries! This incident is yet another excellent example of how important it is to protect your equipment and wiring with not only fuses, but also with fuses of a correct rating.

Looking for detailed guidance on how to get your truck camper ready for the summer? Or perhaps you’re looking for a quality preventative maintenance plan to keep everything in your camper operating in tip-top shape? [read more]